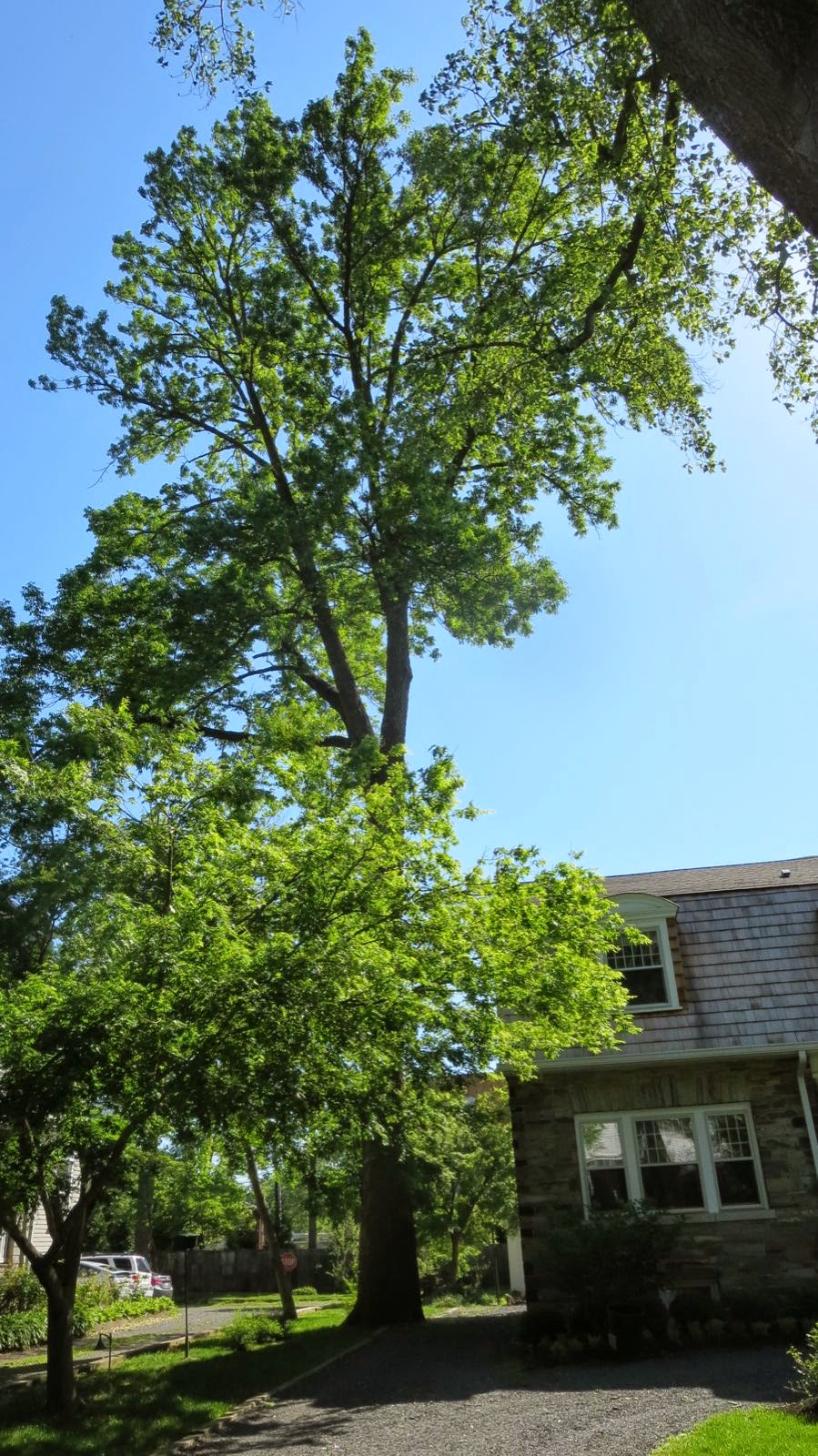 This is a towering white ash tree, one of thousands in Princeton, and for as long as anyone can remember, it has grown "real good for free", as Joni Mitchell might say. As with the clarinet player in her song, playing for free on a street corner, people pass it by without a thought, while it quietly supplies beauty and abundant ecological services--shade, cooling, habitat, oxygen, carbon sequestration--all rendered at no cost.

That's about to change. Four years ago, I wrote on this blog:

"In Princeton, we will over the next decade likely witness a dieoff approaching the scale of the chestnut and elm dieoffs of the 20th century, as the emerald ash borer, which hitch-hiked to Michigan from Asia in wooden packing crates, continues its spread eastward."


It doesn't take any great clairvoyance on my part to see the future. I had once lived in Ann Arbor, MI, which had to cut down 10,000 ash trees at a cost of $5.8 million.

Living in Princeton, then, is like having traveled back in time. Knowing what's in store, what's been sweeping eastward from the midwest, makes me appreciate more what we still have. I pause more than I might otherwise at the sight of an ash, particularly in the fall when they change color. The halcyon moment for me with ash trees will always be the time, long before the emerald ash borer came on the scene, when I drove north in Michigan to play for a wedding that was perfectly timed with the fall colors. Sugar maples dominated with their radiant orange and gold. Sumac made horizontal strokes of brilliant red. And the uncanny mix of yellow and purple in the ash trees was so strong it seemed to vibrate. We were paid for our time, but they let us play the jazz tunes we love, outdoors, overlooking a glorious valley of color. Our singer's rendition of Make Someone Happy was so full of buoyancy and conviction we knew we had found the meaning of life. If a composer like Scriabin can see color in music, then surely there was music in the colors of the north woods that day, the trees playing an ancient symphony freely given, filling us with enough color to last us through the long Michigan winter

This spring, the emerald ash borer, known unaffectionately by its acronym, EAB, was finally found in NJ, 25 miles north of Princeton, in a parking lot next to Patriot Stadium in Bridgewater. Though those of us who knew it was coming have a head start on grief, the official announcement on May 21st still had an emotional impact. This link used to show New Jersey as free of EAB, but essentially surrounded by infestations in bordering states. Now NJ has been added to those with EAB. It may have flown in on its own, from NY or Pennsylvania, or it may have been transported in firewood. None have shown up in traps set in Princeton, but the traps are an imperfect test of their presence.

Princeton's battle with the beetle will be expensive. The strategy cannot realistically be to win, but to cushion the blow to canopy and pocketbook. Any view more optimistic than that veers into wishful thinking. In the twelve years since it was first identified in Michigan, neither white nor green ash has shown resistance to the insect, and no controls are poised to save the day. We may save some of our ash trees with systemic insecticides, at considerable expense, but far more will be lost to a diminutive beetle that no one noticed in Michigan until it had become to entrenched to eradicate. And Princeton has a lot of ash to lose, it being our most numerous tree. Arborist Bob Wells' recent inventory identified 2200 white and green ash trees along the streets, plus the uncounted thousands in our parks and woodlands.

The strategy for dealing with the invasion, which could arrive in Princeton in a year or two, or could already be here but undetected, will likely involve chemical treatment to protect the finest specimens, and beginning to cut down other ash even before they show symptoms.

There are chemicals that can be used to save individual trees. As a proactive measure, Princeton University began treating its most valuable ash trees two years ago. Choosing which insecticide to use involves tradeoffs. Imidicloprid is less expensive, but is injected into the soil around it rather than directly into the tree. Because the compound is toxic to pollinators, it should not be injected where flowers are growing beneath the tree. The herbaceous plants will absorb the chemical and transfer it to the pollen in their flowers, where the pollinators will be exposed. Other options can be found in the extensive notes below.

Two things are particularly upsetting about the arrival of the emerald ash borer. Of course first and foremost is the loss of a tree species and all the beauty and services it has been providing for free. The other is New Jersey's incredible lack of preparedness. Composting centers are already overwhelmed. Trees make an excellent fuel--one of the few ethical forms of energy we currently have available to us, since wood's carbon comes from the air rather than from underground sources. The technology is available to cleanly run cogeneration plants with wood for fuel. If the state actually is preparing for what one arborist called "ten years of mayhem", it's being done very quietly. Chances are, New Jersey will only start reacting once the devastation begins, even though it had ten years to prepare.

The recurring lesson is of the abundant services and beauty nature gives, every day, none of which are entered into our economic calculations, and the increasing vigilance and stewardship required to guard those gifts as global trade increases the pace of change. Below are my collected notes on the coming invasion, including an extensive phone conversation with Donald Eggen, division chief for Forest Pest Management in Pennsylvania.

Notes from a conversation with Donald A. Eggen, Division Chief of Forest Pest Management Division. (These notes were rapidly written, but are my best rendering of what Eggen said.)

EAB attacks trees as small as 1" in diameter.
The insects start at the top of the tree and work down.

Expansion of EAB into new areas
In 2013, PA documented EAB in 16 new counties without even looking very hard
The Louisville Slugger baseball bats are made out of ash harvested in northern PA. EAB is now moving into that area.
Traps for detecting EAB in an area don't work very well. Their odor imitates a stressed tree.

In a given area:
EAB doubles each year. If 16% of trees affected, the next year there will be 32, then 64, then all. It can sweep through a town in five years. (sources on web suggest more like ten years--perhaps it takes a few years to get to 16%, and then a couple years to kill those that are last to be attacked).

Assessment of a tree
Take DBH (DBH (diameter at breast height) is a poor measure. Bigger trees need more juice.)
If 70% of crown looks good, then tree could be saved
If it dies, it becomes a hazard tree
Don't treat if more than 30% in decline. Insect damage can't be repaired. Most ash in decline, even without EAB, due to winter storms, wet weather, all of which, if it's a street tree, brings out root ball problems left over from improper planting. Kill the roots, kill the tree.

Strategies
Options are to treat, to remove, or to remove and replace.
Don't delay on treatment. Do most critical trees in first year. Spread the cost out.

He mentioned Chris Sadoff at Purdue, and I later found this, which is one of many such documents on the web to help with decision making: http://extension.entm.purdue.edu/EAB/PDF/NABB_DecisionGuide.pdf

Treatment: Recommends Tree-age (Emamectin Benzoate), a play on the word "triage". Not available to homeowners, it's restricted use, and must be applied by professionals. It's more expensive than another treatment with various names such as Merit, but has advantages in that it is injected directly into the tree. The injection point is at the base of the tree, where it flares out just above the ground. This is where the sapwood is thickest. The product is made by Arbor Jet, and applicators should undergo training through Arbor Jet. There is reason to believe that it will last longer than two years, possible 4 or more.

Merit, as with other similar products whose active ingredient is imidicloprid, is injected into the soil around the tree. If the soil is compacted, the uptake could be slower. Something called Safari is sucked up faster by the tree than Merit, but doesn't last as long (?). Both Merit and Safari protect the leaves well. A product called Xytec has to be applied every year.

Timing
With Tree-age, treat late May through June. A cloudy day with a little breeze is best. (presumably when a tree is translocating upward most effectively).

Cost
Ash can be more costly to remove than to treat. If they die, they become brittle very quickly, which makes them more dangerous to work on. Some arborists refuse to go up in the trees if they have become brittle. An increase in accidents has been documented. The trees can also become weak at the roots and topple over at the base.

Chicago is treating tens of thousands of ash, at a cost of $1.4 million/year.
The plan is on the website. Westchester, PA has a 10 year plan that includes cost.

Other insects/diseases
Asian Longhorned Beetle (ALB) in Wooster, MA, big infestation. ALB has gotten into the woods, which is bad because it doesn't kill trees in the woods and therefore is hard to find. Not as good a flyer as EAB, so slower to expand territory.

SYMPTOMS OF EMERALD ASH BORER (taken from the web)

3. S-shaped feeding galleries – can only be seen when bark is scraped or in bark splits

4. Woodpecker damage – missing or discolored bark beginning at the top of the tree

5. Crown Dieback – foliage at the top of the tree may thin or discolor

6. Epicormic sprouting - shoots of leaves growing from the trunk 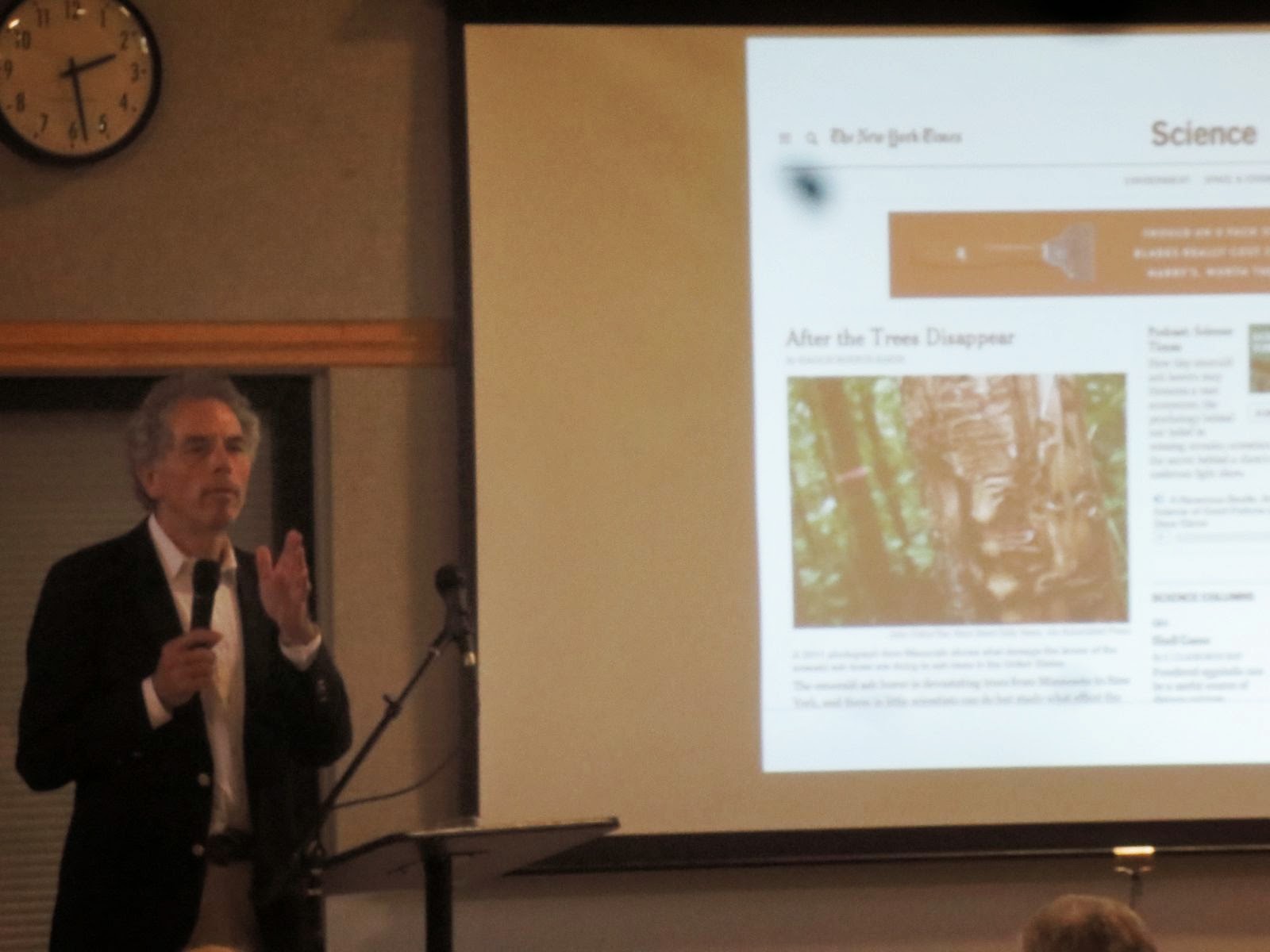 The New York Times ran an article on emerald ash borer, featured in a talk in Princeton by the Times science editor that same day.


Here's an article that claims that woodpeckers can play a role in controlling EAB. I'm skeptical.

Interestingly, ash continue to sprout in the woodlands in Ann Arbor, and can grow to 6 inch diameter, but the chances of their growing to maturity are slim.

Some sources on the web suggest that once EAB  passes through and attacks all the trees there are to attack, then ongoing treatment costs for those trees saved will come down somewhat.

Update: A short video on a parasitic wasp being introduced in Maryland to help control the EAB. Sounds like it could potentially help in the longterm, but is described as "a drop in the ocean", given the vast numbers of EAB compared to the few parasitic wasps released.