Requiem for an Elm 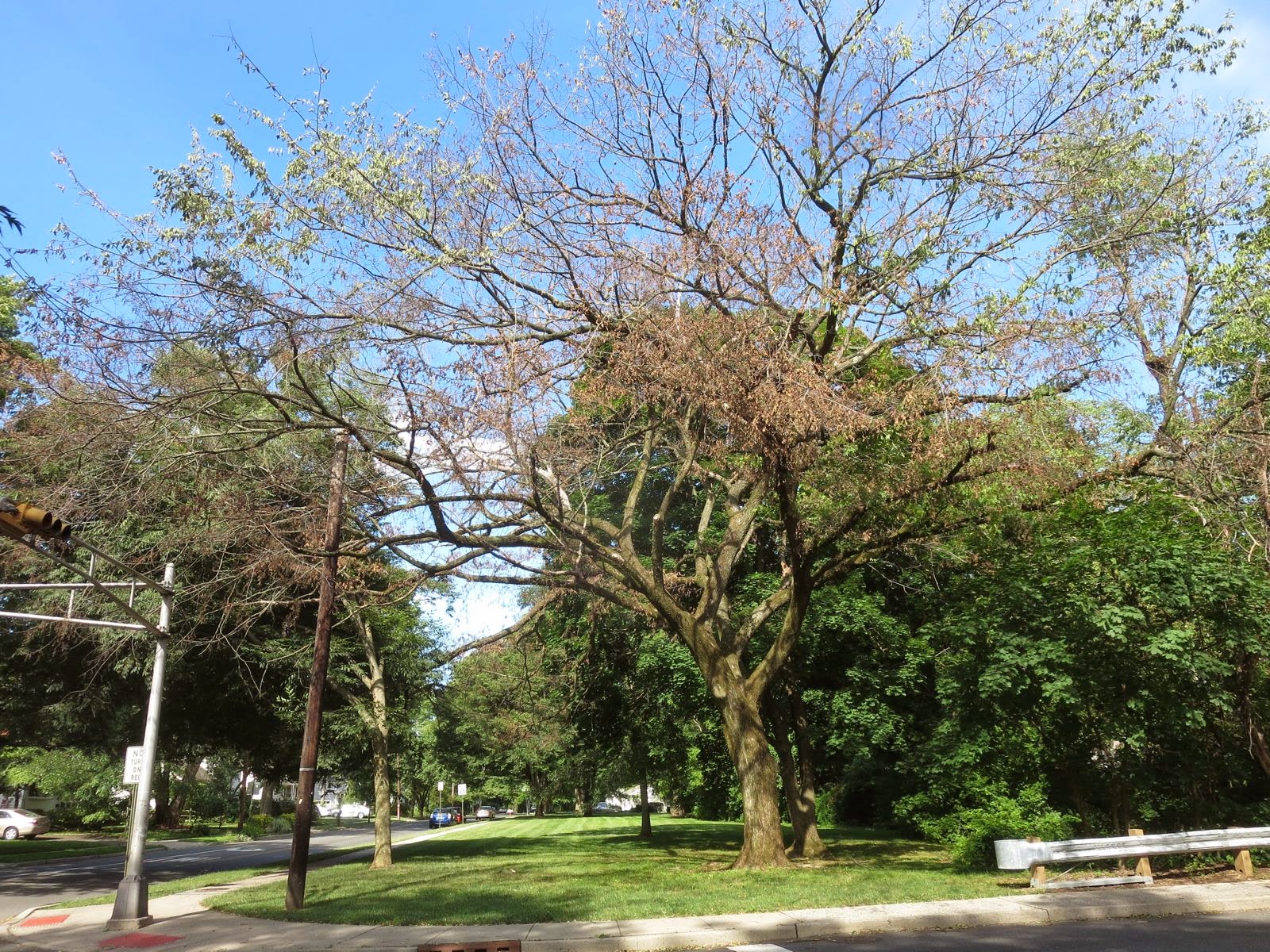 The lovely, spreading American elm at the corner of Harrison St and Hamilton Ave. has finally succumbed to Dutch elm disease. Not that many people will have noticed. Thousands of cars pass through this busy intersection every day, their drivers seeing only a blur of green. And there are many trees in the neighborhood that even those of us who walk will find conspicuous only in their absence, when we encounter a stump and a large gap in the canopy and wonder what was there.

This elm is one of the trees I noticed, so well matched to the space it was given, its long limbs spreading the gift of shade. And though I grieve its passing, it has lived a longer life than any American elm could be expected to live. Coming to New Jersey from Michigan and North Carolina, I had largely conceded the elm to fringe status, its glorious, towering vase-like form living only in memory. But in Princeton, American elms are more than a memory. They may sometimes be downed by the disease, but are not out. Nine years ago, the famous elm in Princeton Cemetery finally succumbed, but not before making the front page of the New York Times and spawning a generation of disease resistant elms, some of which were chosen to grace Pennsylvania Avenue in Washington, D.C.

By chance, I happened to be walking by the elm at Harrison and Hamilton recently when a man was standing beneath it with a clipboard. It was Arborist Joe Christopher, who oversees treecare at the housing development there. He said the tree has to come down, and recalled stories of how, when Dutch Elm disease swept across America, chain saws could be heard all day.

We agreed that Princeton is on the cusp of a similar era. Christopher predicts "a decade of mayhem", beginning when the emerald ash borer sweeps into Princeton as it has all over the midwest and now in the east, killing any ash tree that hasn't been inoculated against it. Over the years, Princetonians have rallied to protect this or that beloved tree from being taken down by developers. But there's a much bigger battle going on, one that has to be fought by government agencies, regulators and inspectors, to protect America from the radical change that comes when a pest like emerald ash borer is introduced.

Other tree species are also threatened. Thousand cankers disease, a major threat to black walnuts, was found recently in Bucks County. The Asian longhorned beetle, another accidentally import that threatens many hardwood species, particularly maples, has been found again on Long Island, and is proving hard to eradicate in Massachusetts.

We're in for a rough patch with our trees, and all the myriad kinds of insects and other wildlife that depend upon them, which is why the loss of our elm at the corner is by comparison a positive story. It lived a good and fairly long life, despite considerable odds. Efforts are underway in town to bring back the American chestnut and the butternut. Ash may still persist as small individuals in the woods after the emerald ash borer sweeps through. But the beauty and diversity that was once ours for free is now having to be worked at. What we're losing, species by species, is that easy grandeur that has long defined America.