Barely A Shadbush Berry to Eat 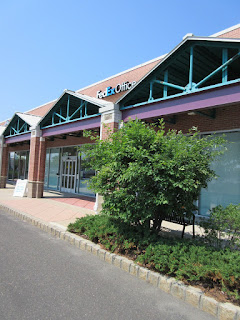 It's been another bad year for shadbush berries. You know, those tasty red berries borne by our native shrub that blooms when the shad migrate up the mighty Delaware River to spawn? Don't recognize the name "shadbush"? Maybe serviceberry or Amelanchier rings a bell. Oh, well. To not be familiar with shadbush is to be saved the dismay of witnessing the corruption of its bounty by cedar apple rust.

How sweet the memory, though, of going to what was once Kinko's out on Route 1 and finding a shadbush loaded with ripe berries at the front door--a secret feast in plain sight. 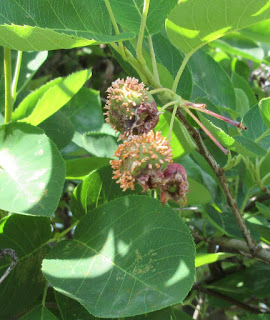 That memory seems more like a dream now, as nearly all the shadbush berries I encounter are a study in disfigurement, as if each berry had donned a grotesque Halloween costume. Even the catbird, so grateful for the berry bushes I've planted in the backyard, seems to have lost interest. If the fruit of a shadbush were a drupe, one could say "Berries, berries, everywhere, but not a drupe to eat." 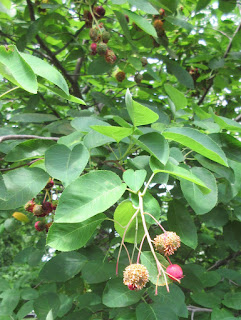 There's a nice grove of shadbush next to Frist Center on campus, where at least a few berries aren't affected. 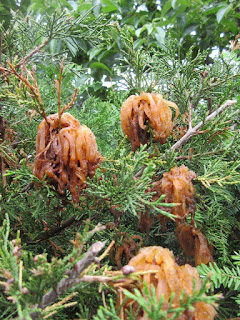 The name of this fungal disease implies that it alternates most notoriously between apple trees and cedars, which may explain why there were these garish growths on an arborvita two blocks from my house a couple weeks ago.

Some treatment recommendations can be found on the web, such as here and here, and there may be resistant shadbush varieties out there, but half the pleasure of eating them was the serendipity, the surprise gift recognizable to only a few.
Posted by Steve Hiltner at Wednesday, June 17, 2015