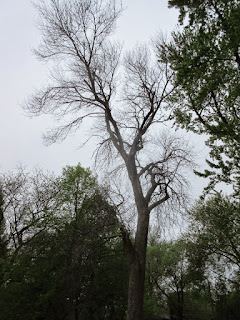 While in Chicago recently for a family reunion, I stepped out on the back patio of my niece's apartment in Hyde Park, looked up, and saw that a neighbor's tree was dying. The thick, opposite twigs suggested ash, and the loss of most of the crown, with only a few lower branches still green, suggested that Emerald Ash Borer (EAB) has made it to Chicago. 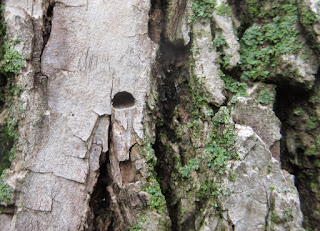 In a nearby Chicago park, I found the characteristic D-shaped exit hole (the native ash borers make a round exit hole).

New Jersey had been exceptional in being free of emerald ash borer, until last year when it was spotted in Somerset, then later in Mercer County. This year, at the May meeting of the Princeton Shade Tree Commission, council member Bernie Miller sounded reasonably sure he had seen one in his yard.

Our town arborist, Lorraine Konopka, has placed two traps on the east and west side of town--one at Valley Road, the other at Marquand Park. The traps contain a pheromone that will attract the insect if it happens to be nearby. Whether or not the traps catch any insects, it's best to assume that EAB has made its way to Princeton, and begin considering which ash trees to treat. It would be nice to think that some ash trees will resist attack on their own, but that hasn't been the experience elsewhere, as far as I know.

Below is info on treatment options from a previous post, along with some related links:

HOW TO SAVE SPECIMEN ASH TREES
It's important for those who have ash trees in their yards to know that those trees can be protected with systemic pesticides. Not all the available pesticides are equally effective, however. Though imidicloprid is being frequently recommended locally, the experts in other states that I've spoken to have all recommended emamectin benzoate (brand name Tree-Age, or Arbor-Mectin).

Page 15 of this document is very informative, and says the emamectin is the most effective and longer lasting, while warning against use of imidicloprid on larger trees. Dave says that the EAB expert Deborah McCullough recommends emamectin, which is supported by this article about communities in Minnesota. The article is very optimistic about saving some ash trees, and offers this interesting approach:
"Burnsville is so sold on that idea of saving trees, rather than cutting them down, that it plans to encourage residents to treat their trees by extending to them the rates the city receives for pesticide injection. "

Curtis Helm, a former Princetonian and currently an urban forester in Philadelphia's Parks and Rec department, advises against using imidicloprid on trees larger than 16" diameter. He says Philadelphia is treating 1000 ash with Tree-Age.

In a previous post on the subject, I included notes from an extended conversation with Donald A. Eggen, Division Chief of Forest Pest Management Division of Pennsylvania. He, too, strongly recommended Tree-Age rather than products that use imidicloprid.
The emamectin benzoate, last time I checked, was more expensive, which may explain the local preference for imidicloprid, but that cost differential is reduced when the frequency of application is considered.

Note: The Arbor-Mectin formulation is said to be absorbed into the tree more quickly than Tree-age, and therefore can be less expensive to apply. Both use the same active ingredient.


Links to news stories about emerald ash borer being found in Mercer County are here and here.

There's also evidence from Yellow Springs, Ohio, that another native related to ash trees, the fringe tree, can be attacked by emerald ash borers. I've only seen fringe tree once in the wild, in a nature preserve I helped create in Durham, NC, though it is becoming more common as a beautiful ornamental shrub/tree.