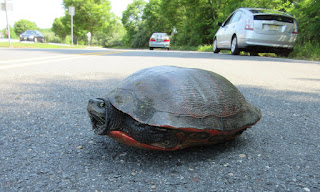 Why was a turtle heading towards the Motor Vehicles Commission offices? Had its shell registration expired? I had just renewed mine, and couldn't really just leave the turtle there. 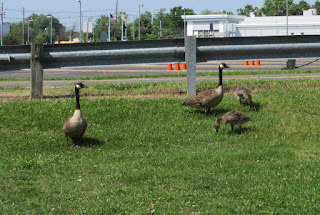 On the way in, I had stopped for a family of geese crossing the road. Three had crossed but one young one had stayed behind. I was about to continue on my way when its mother suddenly appeared in front of my car, raised her wings and glared at me like a crossing guard until the straggler had joined them.

A turtle has no such option, and retreating into its shell was not going to work for long on that busy street. 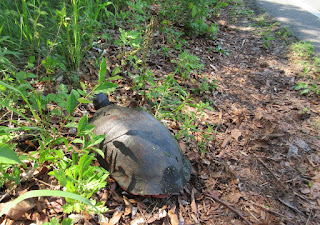 So I carried it back to the wooded side of the road, told it to leave the annoyance of vehicle registration to humans, then watched with satisfaction as it quickly disappeared into the thicket.
Posted by Steve Hiltner at Tuesday, June 09, 2015