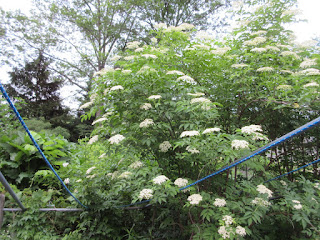 When Johnny Elderberrystem had to remove a big pin oak tree in his backyard that was sitting on a drainage tile and shading his neighbor's vegetable garden, one thing he did with all that extra sunlight was, not surprisingly, grow some elderberry bushes. Johnny acquired his love for elderberries way back when, during jaunts with his parents each fall to harvest elderberries along the streams of Wisconsin. All those berries turned into delicious preserves and pies. Decades later, he learned that elderberry bushes, like buttonbush and silky dogwood, could be propagated by cutting a section of dormant stem in late winter and pushing it into the ground. Couldn't be easier. Johnny Elderberrystem was off and running.

And when those now ten foot high shrubs hold forth with disks of white flowers, Johnny knows it's time to venture out and see how all the other elderberries he's planted in Princeton over the years are doing. 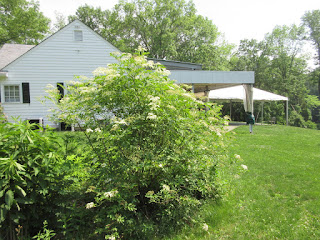 This one in the raingarden at Mountain Lakes House probably grew from one of those live stakes he started in the greenhouse. 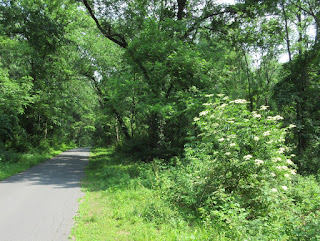 And this one along the Mountain Lakes driveway is one he planted and actually remembered to water through its first, precarious year. (You've got to wonder what sort of survival rate Johnny Appleseed got, planting apples here and there while he waltzed from county to county, leaving all those seedlings to the whims of the weather.) Other elderberries are living the good life at the Princeton High School ecolab wetland, their thirst well quenched by the sump pump's steady offerings. 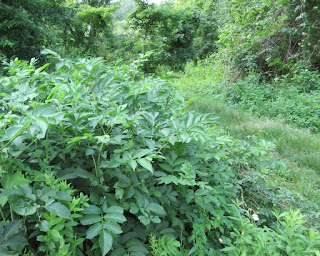 This spring, Johnny Elderberrystem remembered to go down to the canal just west of the Harrison Street bridge, to mark elderberries with red tape so that the state parks crew that does the annual mowing of the fields there would mow around them. He missed one, and though new stems are popping up, they won't bloom and thus won't offer wildlife any flowers or berries to feast on. He did manage to mark about ten, though (he lost count at three, being easily distracted from counting) and the crew mowed around them, which means a little more dining pleasure for the pollinators and the birds.

Now, if only the birds could be trained to use the elderberry feast to bomb the visiting coxwains as they bark orders at their crews in ivy league regattas this fall, Johnny might be able to get some funding for all of this proactive stewardship.