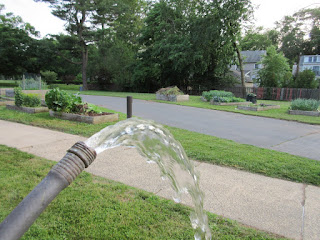 Water's everywhere in Princeton, but it's not always easy to get it to where it's needed. Take the raised beds at the Princeton High School as a for instance--seventeen beds, installed in a sunny patch behind the school in the fall of 2009 with great spirit and optimism. There must have been thirty of us, kids and adults, cutting, nailing, hauling, filling. Piles of lumber and rich soil, a table with hot cider and chili on a cool autumn morning. It takes a village to make a school garden. And the designers made sure to put the gardens close to a spigot.

Only one problem. No one could get the spigot to work. Facilities staff tried to fix it, but it could only be accessed through some long tunnel deep in the bowels of the building, and somehow the fix never happened. For lack of water, many of the beds went unplanted, students came and went, interest rose but mostly fell, and except for some planting by the horticulture class, most of the beds grew weeds.

Fast forward six years, my younger daughter is a freshman, expresses some interest, and so she and a friend plant one of the beds with native wildflowers. I check the spigot. Still not working. I figure, why not try one more time. So I email facilities staff, and boom. They have a guy, Dan Galatro, crawl into the tunnel. He was apparently unfazed by whatever had proved intimidating before, because a day later, he emails that the spigot's fixed. How great is that? From my experience, once the water's flowing in the right place, all sorts of good things can flow from that.

So, the moral of that story is that good things can happen when people forget to be discouraged. 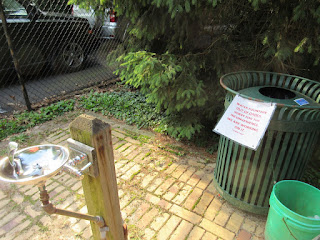 (I google "T R Potts princeton", thinking Tee-Ar Place and Potts Park are named after the developer of the neighborhood, who I'm guessing had daughters named Dorothy and Ann, because there's also a street called Dorann Avenue, and up pops a page from an ebook entitled "The Ancestry, Life, and Times of Hon. Henry Hastings Sibley", by Nathaniel West. It appears to say that T.R. Potts was brother of a director of the Princeton Theological Seminary, Rev. George Potts, a man of "majestic presence" and "universal esteem". The wife of the Dr. T.R. Potts in the book was named Abbie Ann.)

Note, 9.9.2018: Just researched this further. There's a Dorothy Ann Potts living in Florida who appears to be related to Dorothea S. Potts and Theodore R. Potts, and lived in Princeton at one time. Theodore's development firm built the shopping center in 1954, and was called Clearview Associates, which explains the street named "Clearview," which may well have had a clear view southward across Princeton back in the 1950s when it was built. ("Relict" means widow.) 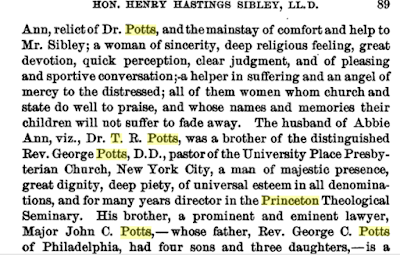 But I was writing about the drinking water issue at Potts Park, where children love to put sand from the sandbox into the bowl of the drinking fountain, thereby gumming up, or sanding up, the works and causing the parks dept. to turn off the water and leave an "out of order" sign posted nearby.

This has been going on for years, so my idea is, buy a drinking fountain that doesn't have a bowl, but instead drains to a raingarden. Here's one that drains down a ramp where kids presumably can put sand and see the water flow through it. Here's one that flows first to where dogs can take a sip, before draining into the ground.

The fountain will cost more, but maintenance will be less, kids will be able to play with sand and water in a positive way, and everyone will see how drainage can be used to grow native wildflowers. Call me an armchair optimist on a lazy Sunday morning, but I'm cooling down that bottle of "Wyn, Wyn, Wyn" champaign, and preparing a toast to working with gravity, nature, and children's nature, rather than struggling against them.