An email from Kip Cherry of the Princeton Battlefield Society included an invitation to a special event at the Battlefield--a ribbon cutting to celebrate preservation of the D'Ambrisi property, Sept. 16 at 10am in front of the Colonnade. There will be speeches, refreshments, and a tour that includes a visit to two ponds on the tract. The public is welcome. 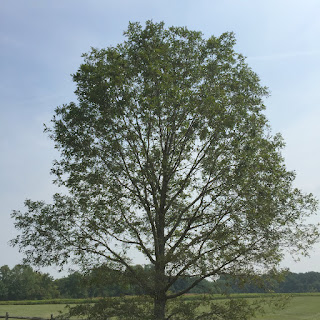 While the park itself is expanding by 4.6 acres, the Mercer Oak II at the battlefield is looking a little threadbare this summer. One of the progeny of the original Mercer Oak, transplanted after the original lost its last branches in a March windstorm in 2000, it has inherited an iconic position among Princeton's trees, with a wooden fence surrounding and interpretive signage to explain its significance. According to one website, the original Mercer Oak "became the symbol for Mercer County (named for the general), Princeton Township, the NJ Green Acres program, and other agencies." 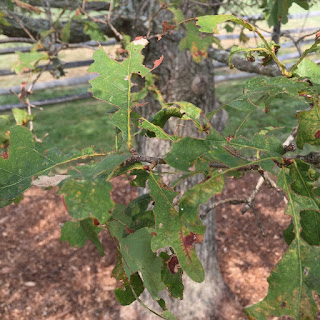 The wooden fence may keep the lawn mowers at bay, but not the insects. Oaks, according to entomologist Douglas Tallamy, support a vast diversity of insect species, which in turn feed the bird world, particularly in spring when birds need a high protein diet to feed their young. Usually, this sharing of plant tissue with insects doesn't affect the appearance of the tree, but this year many of the leaves are stripped to their veins. Kip has sent a sample off to Rutgers for identification, but when I stopped by, there were no insects to be seen, only the consequences of their work earlier in the season.

My best guess, from an image search on google for similar leaf damage, is the species of cankerworm active in the spring. 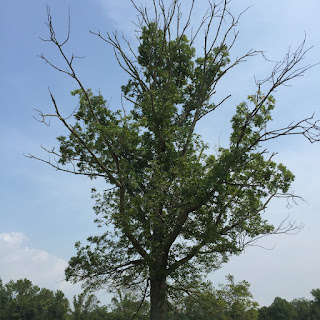 Another white oak nearby on the battlefield is showing far more severe symptoms, the source of which is unknown.

Previous posts about the battlefield should show up at this link, or are searchable by typing "battlefield" into the search box. Writeups on other trees you might encounter at the battlefield include young 15/16th native chestnuts protected from mowers and deer by cages, the towering black locusts behind the Clark House (black locust is decay resistant and was popular for making fenceposts), two hicans (graft of pecan on hickory root stock), and the dogwoods lining the northwest field, contributed by the Dogwood Garden Club, that I keep trying to save from invasive vines.