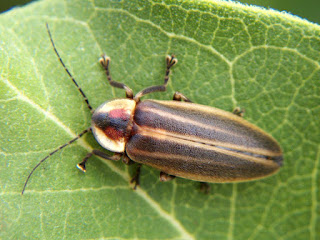 Where have all the fireflies gone? Gone to egg masses, every one. That's the partial answer I came up with after a friend emailed to ask me why she wasn't seeing fireflies. Though I'd seen many earlier in the summer in my backyard, around the time of 4th of July fireworks, I hadn't thought to look recently. Sure enough, not a one to be found in late August.

By this description at insects.about.com, the adults we saw in July have mated, laid eggs and, having outlived their usefulness, have quietly turned off the lights on their generation:


"In mid-summer, mated females will deposit about 100 spherical eggs, singly or in clusters, in the soil or near the soil surface. Fireflies prefer moist soils, and will often choose to place their eggs under mulch or leaf litter, where the soil is less likely to dry out."

But in that description lies a potential answer to my friend's deeper concern, that fireflies in general are becoming harder to find in Princeton, even in July when the adults would normally be active. Note that the preferred habitat for laying eggs is moist soil where mulch or leaf litter is present. The trend I've seen in Princeton landscaping, both public and private, is emphasis on a neat and clean appearance. Shrubs are removed (e.g. around the high school); the soil is stripped of its leaf cover; and people tend to think that wet soils need to be drained. The air is filled with the din of lawn mowers and leaf blowers, the better to purge the landscape of anything that might dare to decompose or protect and feed the soil.

Cause and effect may come more clear with closer attention to where the fireflies shine their lights next summer. But it could explain why fireflies were so numerous in mid-summer in my backyard, where runoff from neighbors' yards and our house is welcomed and leaves are either mowed back into the lawn, used to mulch informal areas, or left where they fall beneath shrubs and wildflowers.

(The photo's a stock photo that may not be one of our local species.)