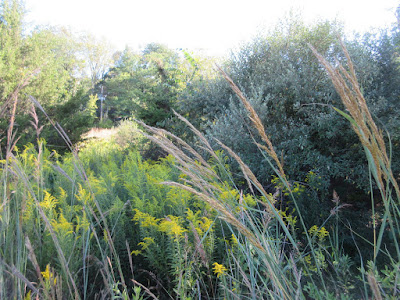 Here's some natural beauty that arose out of human collaboration. Where once there was intensive mowing of turfgrass, there's now some lovely, fresh (nonallergenic!) goldenrod and the bronze plumes of native Indian grass gracing the border of Farmview Fields. The pleasure here is not only in the relaxed beauty swaying in a breeze, but also in the way it came about. 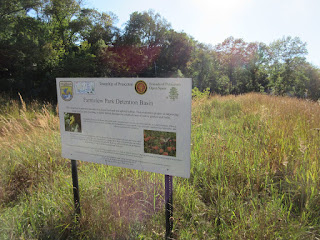 A familiar sight in New Jersey is the detention basins (I call them "turf pits") in parks and developments, designed to catch and temporarily "detain" stormwater to reduce downstream flooding. Required by law, they are a sort of no-man's land, unused by people or wildlife--a sort of make-work project for mowing crews. The good news is that they can be transformed into large, attractive, low-maintenance raingardens that will actually do a better job of filtering the stormwater before it enters the nearby waterway.

As the sign explains, a federal agency, the Partners for Fish and Wildlife, performs this transformation. All the municipality has to do is give permission, and commit to maintaining the planting for ten years. Maintenance at Farmview Fields has involved little or nothing beyond an annual mowing--far easier than the regular mowing previous required of the turf. It's a bit like signing a lease to have solar panels installed on your roof. There's no cost for the installation, and the only expense is that you pay lower electrical bills going forward. So, there's a commitment involved, which can always sound scary, but it's a commitment to do the right thing while spending less money than you were before. 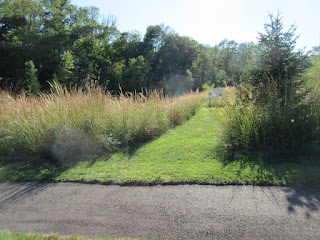 I'm particularly proud of this detention basin planting because it's an example of an idea I put forward, at that time as naturalist for Friends of Princeton Open Space, to get better results with less work, and the town agreed to go ahead with it. If you visit Farmview Fields, maybe to attend a baseball or soccer game, you can spot the planting in the lower corner next to Pretty Brook Drive, behind the soccer field along the Great Road. 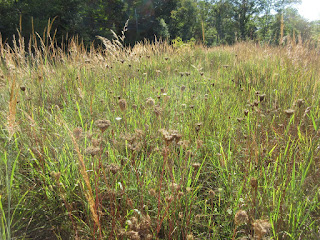 If I were to intervene at all in this landscape, it would be to reduce the number of Queen Anne's Lace (wild carrot--the same species as our domestic carrot), which was considered an invasive in midwestern prairies, and which has started to gain density in NJ. Reduction of purple loosestrife in the basin itself, too, would be a good idea, but the overall health of the native species is what matters most.

This coming spring, Princeton and Partners for Fish and Wildlife, along with DR Greenway and the nonprofit I co-founded, the Friends of Herrontown Woods, will be collaborating on additional detention basin conversions, at Greenway Meadows and Smoyer Park.