A Burning Question About Playground Shade 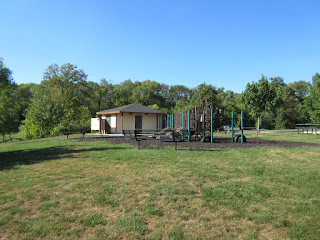 What's wrong with this picture? The clue is in the shade, or lack thereof. Every parent remembers a visit to a playground in the middle of summer, when the sun-baked play equipment was burning to the touch. With all the trees planted as part of the landscaping years back for Farmview Fields, not one was planted near the play equipment to provide shade.

This conspicuous omission is more common than one would think. In my experience, strategic planting of trees to shade park benches and play equipment is the exception rather than the rule. During my years in North Carolina, I decided to paddle upstream against this illogical paradigm by planting a river birch specifically to shade a park bench. A friend tended the tree through a drought or two, it quickly grew, and after several years was providing wonderful shade, at which point the park bench mysteriously disappeared, probably stolen for scrap.

My words of wisdom, a la Chauncey Gardiner in Jerzy Kosinski's "Being There", is that a gardener develops a capacity to see into the future, because the act of planting requires imagining what the plant or tree will look like once it's grown. One actually puts oneself "there", in the world that will exist years hence. Gardening also encourages a participatory relationship with the landscape, a belief one can intervene to make things better. These seem to be rare traits.

The only reason I can think of for not having planted shade trees here is that the playground surface consists of ground-up rubber tires, which the landscape designer may have wanted to keep free of leaves and everything else a tree drops. Still, it would be strange--a nature-phobic landscape plopped down in the middle of a park.
Posted by Steve Hiltner at Saturday, September 26, 2015