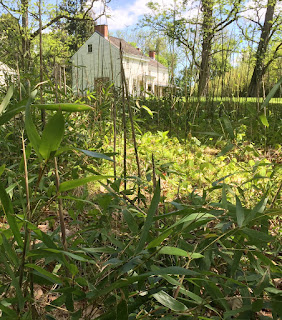 Whatever purpose this bamboo patch at Princeton Battlefield was originally supposed to serve--screening?, poles?, bamboo shoots?--its expansionist tendencies have led to ongoing attempts to eliminate it. Last year marked a turning point in the battle to prevent the giant clone from blocking the old trail between Clark House and the Stony Brook Meeting House. Because of strategic interventions in both spring and early summer by the Battlefield friends, all that remained this spring of the mighty stand were low, grassy clumps of bamboo leaves huddled near the ground. However, as expected, the root system still had enough energy to launch a new generation of strong vertical shoots this year, aspiring to regain its lost ground and resume its expansion into the trail and the area where a barn once stood.

Protecting these historic features of the Battlefield means returning again this June to cut down the new stems before they can start collecting solar energy. Since expansionist plants can be so daunting to counter, it's satisfying to intervene when the stems are soft and easily cut with a pair of loppers. 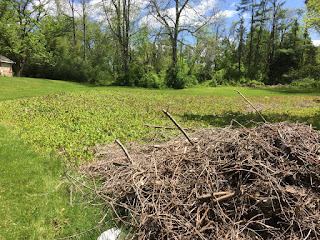 Just across the path, the volunteers left a big pile of porcelainberry vines cleared from a patch of ground they wish to reclaim from the "kudzu of the north". 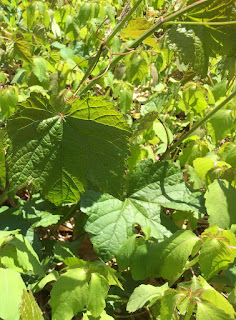 There's a native plant mixed in. Beneath the grape-like leaves of the porcelainberry is a sea of the lighter green leaves of jewelweed, whose tubular orange flowers attract hummingbirds.
Posted by Steve Hiltner at Wednesday, June 01, 2016