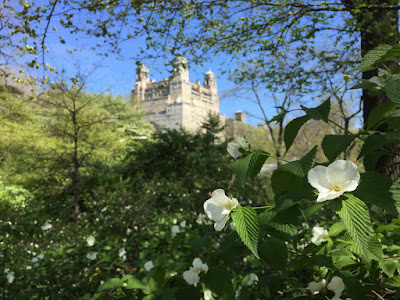 Central Park back in April, where a glorious nature is framed by a Manhattan skyline, like a verdant postage stamp in the Forever series, 50 blocks long and 3 long blocks wide.

The land's mix of rock outcroppings and swamps, a desire to emulate parks in European countries, and a healthy dose of 20/20 foresight (short history here) all played a role in sparing this ground from economic imperatives, a place where nature can have its day, every day.

Central Park is ringed by museums of art and history, but Central Park's history is of the living sort, etched in infinite varieties of green and blue, enduring but ever changing, bottomless in its imagination, needing no roof other than the sky. 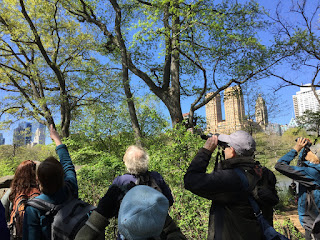 Spring migratory birds, shuttling like ambassadors between earth and sky, continent and continent, drew a crowd of admirers welcoming their return, cheering their journey, as if the birds were sailers just off the ship. 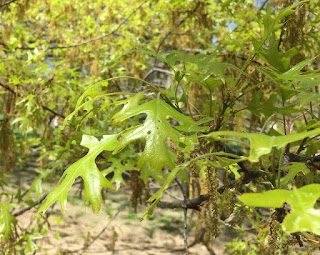 The warblers gobbled down proteins and energizing fat in the form of insects nourished by a patron oak's foliage, 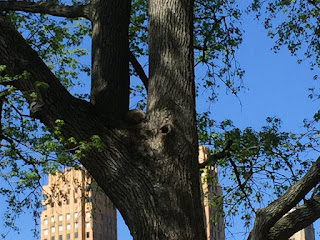 while a raccoon's interest in the tree was more structural. Indifferent to our earthbound attention, it snoozed through the day in its high rise apartment (no elevator but rent controlled) in the crotch of the tree. 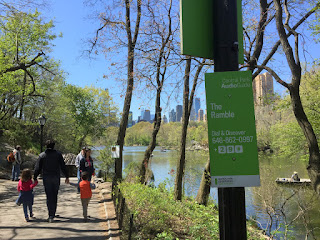 I could count on one hand, well, maybe two, my visits to Central Park, and yet it strikes deep chords within. Buildings are usually framed by nature, but in Central Park, its the buildings that do the framing. Get to know plants on a first name basis, and they will become like old friends you run into wherever you go. Central Park is like seeing an old friend all dressed up in a suit for the first time. 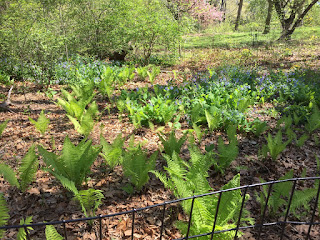 The habitat restoration being done along the trails of the Ramble are not yet Shakespearian in depth--Shakespearian here defined as the more you look, the more you see. But the restoration of expanses of native wildflowers, grasses, sedges and ferns on the forest floor is sufficient to trigger memories of the rich understory many eastern forests had just a few decades ago. Though ringed by concrete and highrise buildings, Central Park has in some ways a better chance to be natural than more rural areas thrown out of ecological balance by intense browsing pressure and unfettered invasive species. 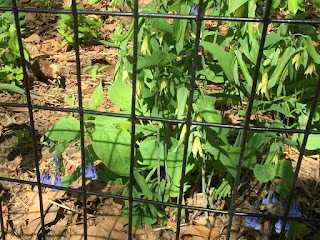 I know of only one bluebell growing in Princeton's preserved open spaces. Central Park has many, protected from their primary threat, straying pedestrians. 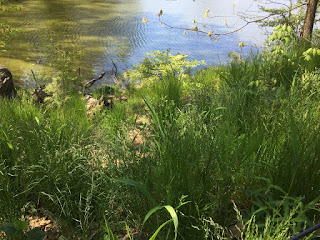 A cool-season grass, presumably native, is being used on slopes for erosion control.

One reason why prospects are good for native plant restoration in Central Park is the vast pool of potential volunteers to draw on, given the auspicious ratio of NY's residents per acre of greenspace. 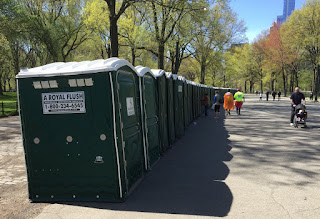 Not that one needs any additional evidence of the shear scale of human numbers in NY, but the Run-As-One fundraiser that day in Central Park drew 8000 participants, royally served by a row of Royal Flushes extending as far as the eye could see, that might rival some nearby buildings if stacked one upon another. Might this be an irreverent artist's vision of infinity? 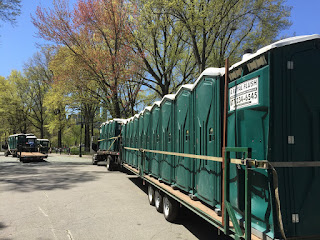 How does one capture the scale of the operation, all of which must be periodically latched to stretched out trailers and hauled away for a bit of refreshing? Clearly, I digress, but then again, how many nature posts are thoughtful enough to provide a bathroom break midway through? 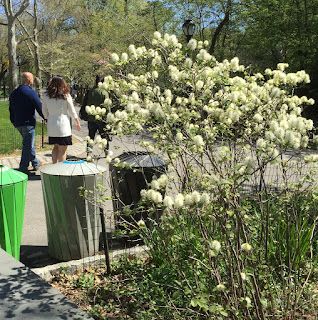 Segueing smoothly back into nature, here, a Fothergilla ornamenting some snazzy bins. 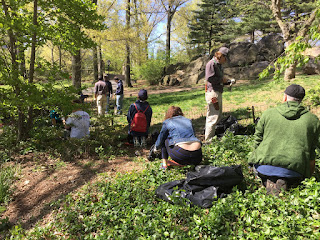 Park volunteers were spending a beautiful spring afternoon immersed in their own sort of marathon, pulling weeds, including the lesser celandine, that pretty but very rapidly spreading plant that had a post devoted to it earlier this spring. 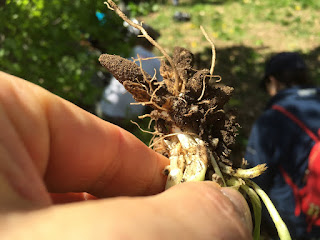 The leader explained that herbicide use is not allowed in the park, so they're having to pull each lesser celandine individually. They showed me the tuberous roots. Pretty slow going, but fortunately, there isn't much of it in the park. 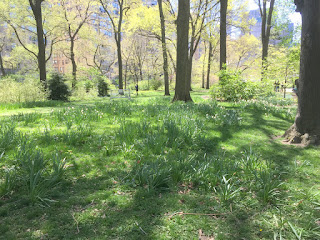 A few places in the park benefit from a thoughtful lack of intervention. These spent daffodils are being left unmowed so the post-bloom leaves have a chance to feed their roots for the next year. 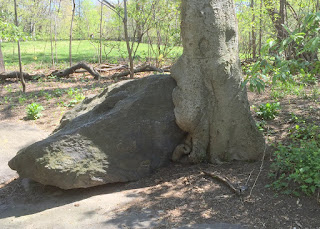 There was some conspicuous smooching between a tree and boulder, familiar to anyone hiking the Sourlands or the Princeton Ridge. Nature has always thrived on an intimate relationship between the animate and the inanimate. 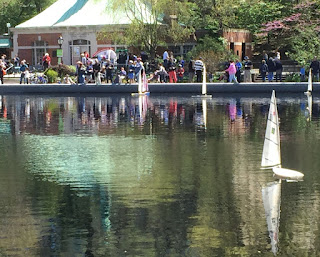 A gentle breeze propelled sailboats and memories of daysailer days. 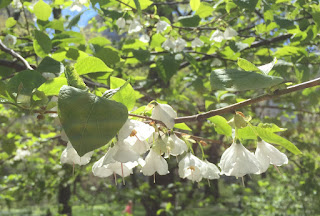 Princeton has a couple of these Carolina bells (Halesia), one on Snowden, one on South Harrison. Strangely, almost no dogwoods were to be found in Central Park. 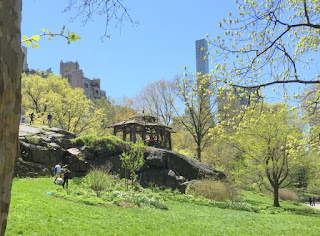 A frame within a frame, as nature, framed by the city, frames a sculpted shelter. 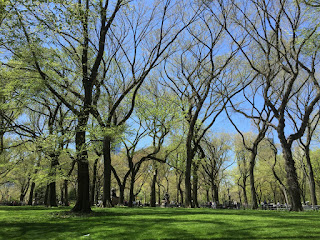 A grove of elm trees brings back memories of what American streets used to look like before Dutch elm disease swept through. 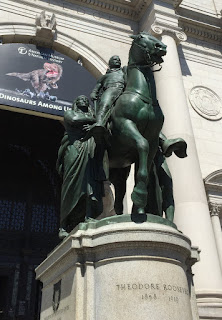 Leaving the park, we found Teddy Roosevelt in good company at the entryway to the Natural History Museum. Might he offer them horses as well? Looks like they're all trying to get back to the nature in Central Park. 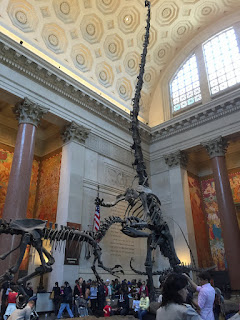 Just inside the Natural History Museum, there appeared to be an allegorical confrontation between Truth and Towering Ignorance. Might Congress's high dome be accommodating something similar? Nice to see that T-rexian Truth had a nice set of choppers, though it wasn't clear who was going to win.