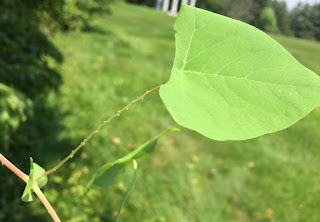 Keep your eye out for this one. It's a vine that's easy to identify, with a triangular leaf, prickly stem, rapid growth. Pull it out, preferably before it makes its small blue berries, or it will grow like a veil over your plantings. Put it in the trash, not someplace where it will get composted and potentially spread. 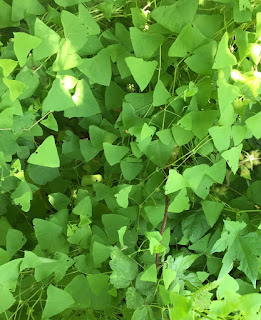 Last year, I spotted it and removed it from two locations--along the gravel road to Rogers Refuge and along the edge of the north field at Princeton Battlefield--but not before it had made berries to grow a new batch this spring.

In an ideal world, someone would be paid to, among other things, take early action to prevent a new highly invasive species from getting established in town. This year, Princeton will have, for the first time, a couple temporary workers focused on invasive species removal in town preserves. But that doesn't include state properties like the battlefield.
Posted by Steve Hiltner at Tuesday, June 28, 2016