PHS Ecolab Gets Some Timely Help 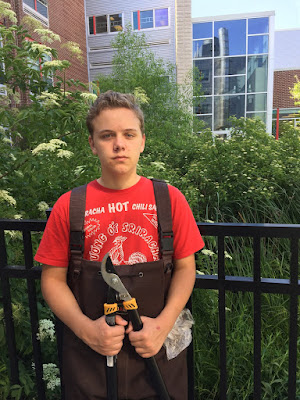 Thanks to Bay Daily of Cranbury for some timely help with steering growth at Princeton High School's ecolab wetland. To finish his freshman year in horticulturist Paula Jakowlew's class, Bay chose a hands-on project, which meant wading into the high school's thriving wetland hidden between the arts and sciences wings of the school on Walnut Street.

His interest got me--one of the founders of this ecolab planting--in there as well, to supervise and do work that had long been needed to keep the wetland's 35 native plant species growing in harmony. You could call him a steward, or a weed warrior, but I like the term "plant keeper", because we're helping the plants to keep on keepin' on. Plants don't actively call out for attention. Most people see only an undifferentiated mass of green, and assume everything must be fine. A plantkeeper looks more closely, and takes action to encourage the good trends and discourage the bad, ultimately sustaining an aesthetic and ecological balance. 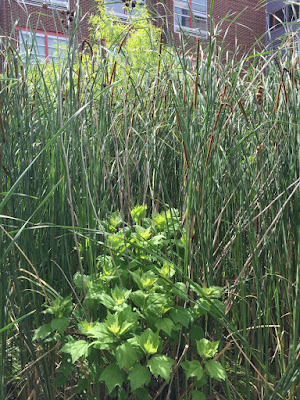 The first task, oddly enough, was to cut back the plant species most associated with wetlands: cattails. The ecolab has two kinds: broadleaf and narrowleaf. I planted the narrowleaf cattail in a shady corner years ago, where it remained well-behaved until some of it got established where there was lots of sun. With all that extra energy to drive its growth, this species that I had thought to be docile began to run rampant over other native species--sedges, rushes, and wildflowers like the hibiscus in this photo. 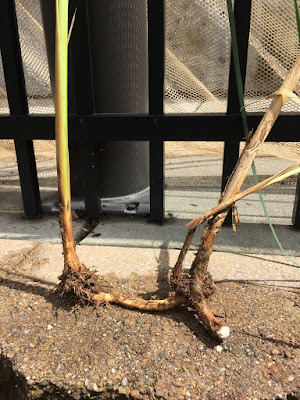 The cattail expands its domain via rhizomes that send up new stems as they spread underground. Much of the work we do to maintain a balance of native species involves cutting back the aggressors that have rhizomes. Cattails, and the floodplain versions of sunflower and goldenrod, live in highly competitive environments in the wild, where their aggressiveness is necessary for survival. Put them in the tamer environs of a manmade wetland and they will take over if not held in check.

This is the trap we gardeners fall into over and over. A new garden has lots of space to fill, so one puts in plants that will spread to cover the bare ground, only to later regret their aggressive behavior. Many homeowners have experienced this with nonnative plants like english ivy, myrtle, or bamboo, but the same imbalance can happen in an all-native garden. 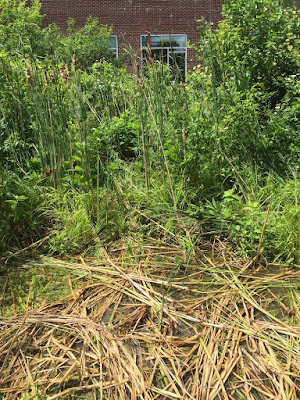 In two after-school sessions, we cut down hundreds of cattail stems to weaken the roots and provide sunlight to other species. One interesting notion is that American Indians took advantage of the cattail's aggressiveness by harvesting it for food. Many parts of the plant are edible, and steady harvest would have curbed the cattail's tendency to take over. 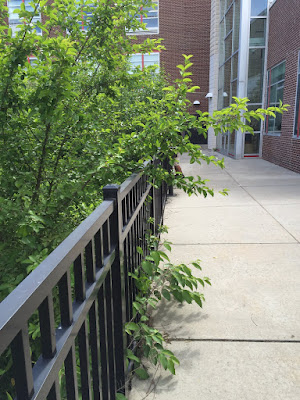 Then there was some trimming back of the opulence to keep sidewalks clear. One of the great things about this wetland is that there's an elevated walkway all around it, allowing people to look down at this watery world of wildflowers, crayfish and frogs.

The other nice aspect of the planting is its isolation, so that problematic species that would tend to throw things out of balance can be prevented from becoming established. A single native Virginia creeper vine growing up the wall got this preventative treatment. 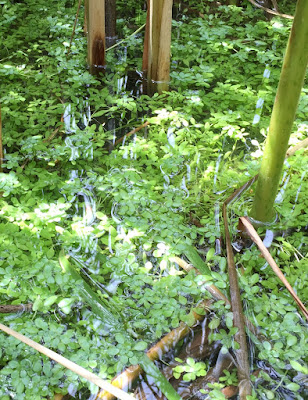 We came upon what's likely a nonnative species--pond water starwort, which will slowly blanket the wet areas unless it's removed next winter. 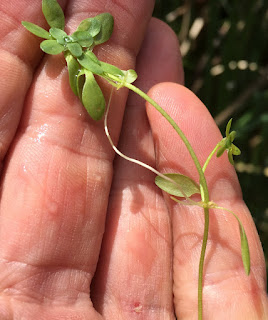 Here's a closeup of this plant, which looks like the native duckweed but has a stem. 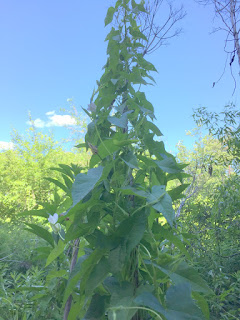 Above ground, there's a similar blanketing threat. Though bindweed, a nonnative morning glory vine, has been less of a problem than I would have predicted, it still needs to be discouraged to keep it from growing over everything. 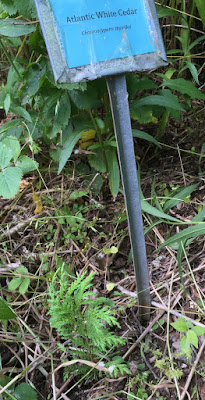 Bay and I found time to appreciate and weed around some of the plants that are staying where they were planted. Retiring science teacher Tim Anderson planted this Atlantic white cedar donated by a Princeton resident, Bill Sachs. 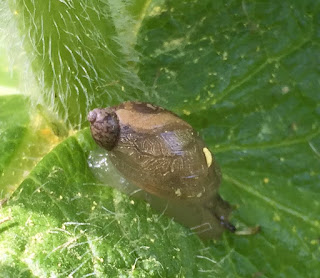 A snail, apparently with a hitchhiker in tow, navigated the hairy leaves of boneset. 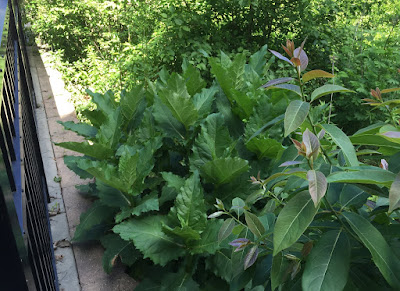 A cup-plant and a persimmon are flourishing along the wetland's edge, on higher ground but still able to tap into the water just below the surface. 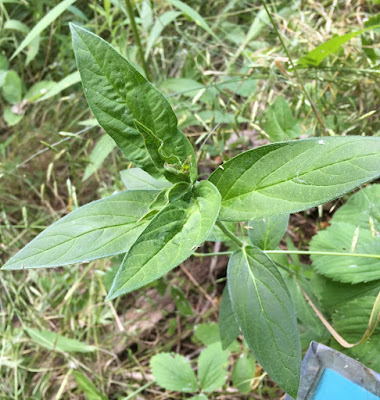 A few swamp milkweeds have persisted, hopefully to feed monarch butterfly caterpillars later in the summer. 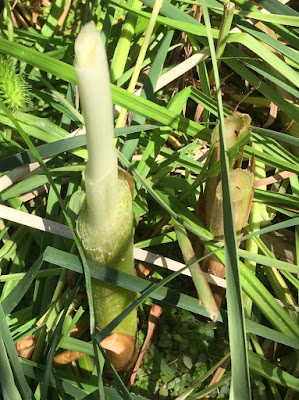 The cattail has a soft inner core whose edibility I was confident enough of to try some. Not bad. 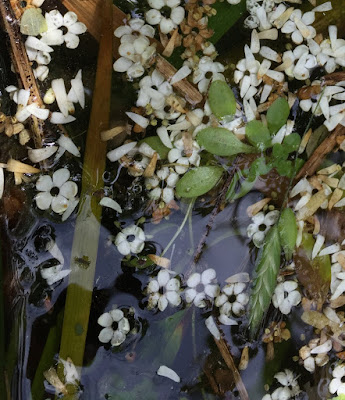 A glance down at the water shows that it's a good year for elderberry blossoms. 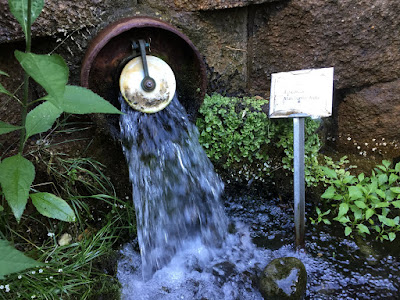 And making it all possible, the high school's sump pump, which so fortuitously spills its year-round beneficence into this improbable wetland.

It was great working with Bay to keep this wetland keepin' on.