Event this Sunday: Milkweeds and Meadows 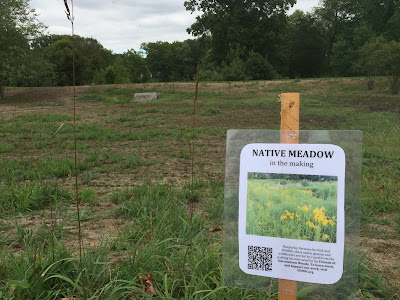 UPDATE: Rain continuing through to noon. The basins are busy doing their good work. Will reschedule.

Let's say the rain will have passed by tomorrow morning, in which case you are welcome, this Sunday, October 9 at 9am, to join us at the Smoyer Park wet meadow. The park's out Snowden Lane in Princeton, just before you reach Herrontown Rd. Drive down to the end of the park's parking lot, where we are converting a large detention basin into a native meadow. After describing the process of converting turf to meadow, we'll plant some milkweed contributed by Don Stryker, property manager at Princeton Friends School. Don has been restoring the woodlands behind the school, and would like to establish more populations of milkweed in town. He found out about our Friends of Herrontown Woods nonprofit during a walk through the preserve, which is just across Snowden Lane from Smoyer Park. 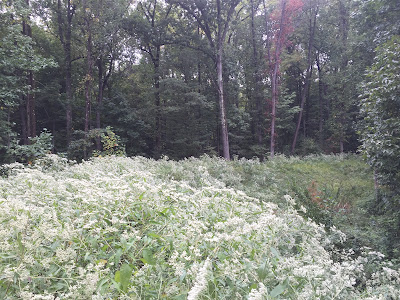 After planting the milkweed, for anyone interested, we'll head around to the other side of Herrontown Woods, park at Hilltop Park, and walk down to the massive detention basin that receives stormwater runoff from the roofs and streets of Community Village and Copperwood. I recently visited the basin with students from Princeton Learning Cooperative. Underneath the masses of late-flowering thoroughwort, which make for a striking effect along the giant berm, 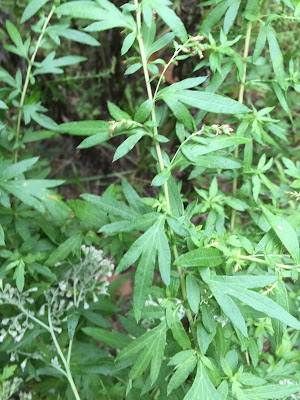 we found small populations of mugwort 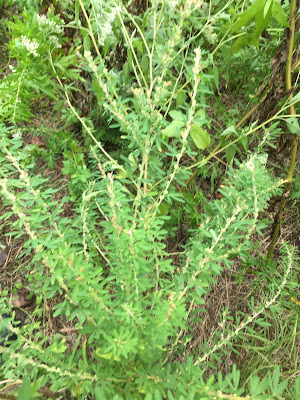 and a particularly worrisome invasive called Chinese bushclover. Mugwort forms monocultures along the nearby gas line right of way, and the Chinese bushclover has been showing up in a few places in Princeton, with the same potential to aggressively displace other species.

Recent rains and unripened seedheads make this a perfect time to pull out these two species while they are still few in number along the berm.

If you're at loose ends tomorrow morning and would like to help out, bring work gloves. A spading fork is also useful to lift the roots of the Chinese bushclover. With soft soil, the mugwort is small enough to pull by hand.

There's a sad story of how Chinese bushclover was planted widely by departments of transportation and gameland managers, touted as a wildlife food only to discover that its seeds were too small and tough to digest. Birds then spread it around without gaining any nutrition. Native bushclovers with digestible seeds were displaced, and wildlife ended up worse off. I once tried to manage a right of way in North Carolina for native bushclovers, but it's really tough to remove the nonnative species once it becomes established. Thus, the proactive weeding expedition tomorrow morning.

Some technical info here: A thorough compilation of information on Chinese bushclover (Lespedeza cuneata): http://www.fs.fed.us/database/feis/plants/forb/lescun/all.html#ImportanceToWildlifeAndLivestock.
Surprisingly, the research that questions the habitat value of the species dates to the 1940s and 1960s, so the view that the seeds are too small and tough to digest appears to date back a long ways. This post includes a photo comparing seed size of native bushclovers and L. cuneata.
Posted by Steve Hiltner at Saturday, October 08, 2016