A Pretty (scary?) Snake in the Basement

Earlier this week, I received the photo below in an email entitled "Copperhead?". The email was from Robert Socolow, a distinguished physicist at Princeton University. He usually focuses on climate science, but this past weekend his focus was drawn to an unusual snake he found in his basement up on the Princeton Ridge. This particular snake subsequently met its demise, but the thought that it could be a venomous copperhead snake made him leery of spending any more quality time in his basement.

My first guess was a corn snake, but we needed more than a guess. I sent the photo to my friend Perry in Durham, NC, where I used to see copperheads now and then in my old stomping grounds along Ellerbe Creek, their heads above water, gazing upstream.  He in turn sent it to his friend and Duke University biologist, Ron Grunwald. 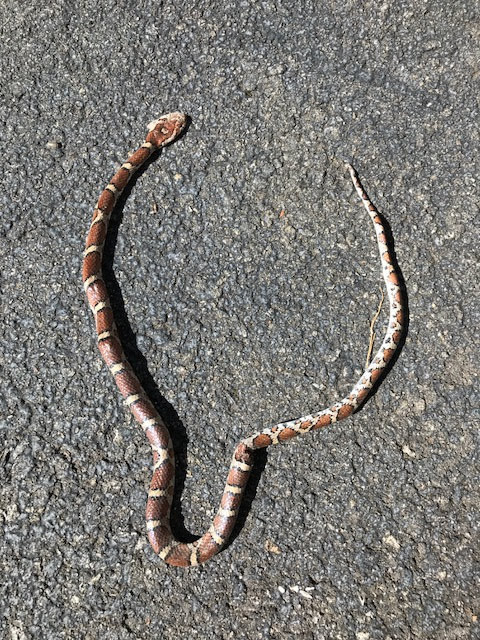 The answer came quickly: Eastern milk snake, nonvenomous. They're said to be fairly common. According to the wikipedia page, they are a kind of king snake that can be found in various habitats, including rocky slopes (the Princeton Ridge), and also in barns. Their presence in barns may be the reason a myth arose that they suck milk from cows, which anyone who knows snakes and cows will agree is udderly ridiculous.

Rob was relieved, but the episode begged the question: Are there venomous snakes in New Jersey? The answer to that came very fast, when up popped the website for Conserve Wildlife Federation of NJ, and a post on the northern copperhead (affectionately known among herpetologists as Agkistrodon contortrix mokasen). For anyone thinking of copperheads as a southern species, it's a surprise to learn that the northern copperhead's range actually begins north of Princeton, extending from the Sourlands up through northern NJ.

The range of the one other venomous snake in New Jersey, the timber rattlesnake, conveniently avoids Princeton, with populations both north and south. The scientific name for this snake is Crotalus horridus horridus, which seems unscientifically judgemental.

For the curious, there's a nice-looking pamphlet of New Jersey snakes at this link.

Thanks to Rob for sending the photo, and to Ron for the identification. Though the snake may well have been doing a fine job limiting the number of mice and camel crickets in his basement, Rob was understandably prompted nonetheless to reaffix the screen that had fallen off a drain pipe leading from his basement to the great outdoors.
Posted by Steve Hiltner at Thursday, March 29, 2018