Memories of a Naturalist--Tonantzintla, Mexico 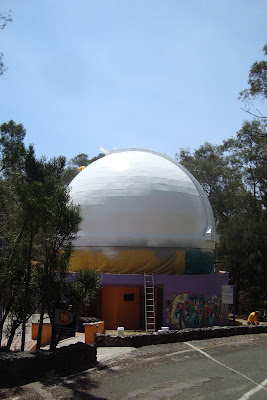 Google''s celebration of Mexican astronomer Guillermo Haro's birthday today brings back memories of traveling to Tonantzintla, Mexico, where Haro did much of his observing. He was the first Mexican astronomer to be elected to the Royal Astronomical Society. My father, a contemporary of Haro's, took the family along on one of his observing runs, probably to use the same Schmidt telescope. There was some overlap in their work, and some correspondence between them in the late '50s, early '60s.

One perk of being the son of an astronomer is occasional trips to dry, mountainous parts of the world. Whether the destination was McDonald Observatory in Texas, Kitt Peak in Arizona, or Tololo in the desert of northern Chile, I was free to explore the mountainsides all day.

Five years ago, when my family traveled to Mexico City, we made the two hour drive over to Tonantzintla to have a look. I tried to overlay the pale fragments of boyhood memories onto the landscape as it is today, with mixed success. 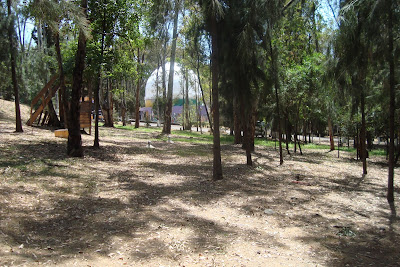 This might be the yard where my brother and I had two burros to ride around on for the week. My brother's was white, and stubbornly held its ground as my brother pulled on the rope, wanting to take a ride. Mine was smaller, brown, and much more cooperative. Rising in the distance was an impressive mountain with the fun, rhythmic name Popocatepetl. Po-po-ka-TEP-e-tl may have been one of those words that my dad liked but which often got caught in his mouth, struggling to get out. 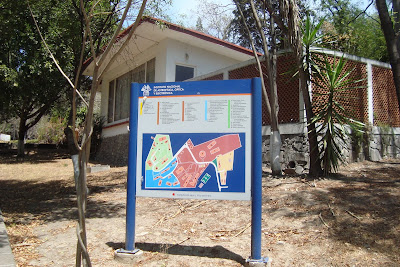 This may be the cottage where we stayed. The most vivid memory is the smell that emanated from the kitchen when my mother first cranked up the dusty stove to heat water for tea.

Come to think of it, visits to such places in childhood, small enclaves of buildings devoted to scientific study surrounded by nature's splendor, and the feeling of walking into a cottage that may have stood empty for weeks or months prior, may have been the template that gives the Veblen House and Cottage in Herrontown Woods such power. I recently met a woman walking her two dogs in Herrontown Woods who likes it there so much in part because it brings back memories of walking through the woods to her grandmother's house when she was a kid.

Other memories from that childhood trip to Mexico include extended practice sessions with a wooden ball and cup game in a city apartment while my father and brother were recovering from a case of Montezuma's revenge, and an embarrassing I-cannot-tell-a-lie moment when my brother was trying to sneak some fireworks through customs. Not knowing there was anything illegal about it, and with a journalist's instinct for thoroughness, and always having been encouraged to speak up if I had the answer to a question, when the official asked us if we had anything else to declare, I proudly declared, "Fireworks!"
Posted by Steve Hiltner at Wednesday, March 21, 2018