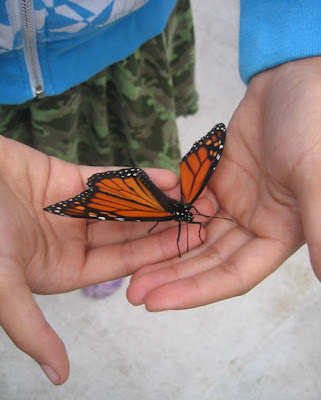 Last year, monarch butterflies numbers were up in the Princeton area compared to previous years, but those heartening visits in our gardens and along roadsides did not translate into increased numbers at their overwintering grounds in Mexico.

The announcement of an official count was delayed this year for some reason. Numbers for the western population of monarchs, overwintering in pine and eucalyptus groves in southern California, came out a month earlier, in early February, and were down considerably. Finally, early this month, the announcement came that numbers of eastern monarchs have declined again. They've been lower the past two years, after small increases the two years prior, with 2014 having marked an all-time low. Over the past several decades, the overall trend has been down, with overwintering monarchs filling 44 acres of forest in Mexico in 1997, and only 6 acres this year.

So many factors affect the survival of monarchs. Illegal logging, windstorms, and coldsnaps can affect their overwintering success. This past fall's migration was affected by the series of tropical storms and the unusually warm weather that delayed the monarchs' flight south. Increased use of herbicides for farming genetically engineered crops has decimated the milkweed that monarchs need to reproduce. And then there's the looming hammer of climate change, as political and economic forces keep us trapped in dependency on fossil fuels. We see, in car commercials, town streets and new developments an ever expanding arsenal of exhaust pipes and chimneys aimed at the heart of nature.

There's some good news to mention. Gendarmes (armed police) have reportedly greatly reduced illegal logging in the monarchs' overwintering forests this past year. And people are showing an interest in planting and caring for milkweed. The stunning thing, which for the most part settles in the back of our minds, unthinkable but inextricable, is that the future remains optional.

While the world continues on its path of self-destruction, we can still find pleasure and joy in working with nature, and wonder why so much of humanity just "doesn't get it." This year, I'll be helping create a large native wildflower garden near the parking lot at Herrontown Woods. Except for a few spots like Tusculum, Princeton's open space is mostly forested, and so offers few flowers in summer and fall to sustain pollinating insects like the monarch. But the combination of windfall from storms and the clearing of invasive woody plants has created a clearing at Herrontown Woods that we can now plant. The aim is to replicate my backyard native garden in a publicly accessible space and on a larger scale, with signage so that people can become acquainted with Princeton's native flora. Much of my backyard garden is in turn modeled on the native flora to be found along the canal next to Princeton's Carnegie Lake. Anyone interested in helping the Friends of Herrontown Woods with this project can contact me through this website.

There's also a citizens' science initiative at this link, where you can provide data on monarch sites to a national survey.
Posted by Steve Hiltner at Friday, March 23, 2018