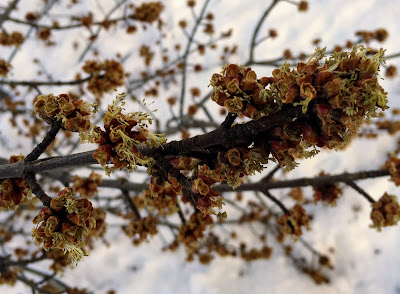 Some species have already sprouted, as many people discovered when branches packed with the flowers of silver maples fell to the ground under the weight of this week's snow. Their blooms are so discreet and elevated that, if not for the jumble of branches littering people's yards, no one might have noticed. 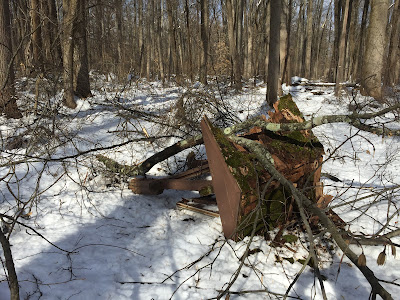 One branch, falling 50 feet from a tulip poplar, scored a direct hit on an old kiosk at Herrontown Woods that hadn't been used for twenty years. 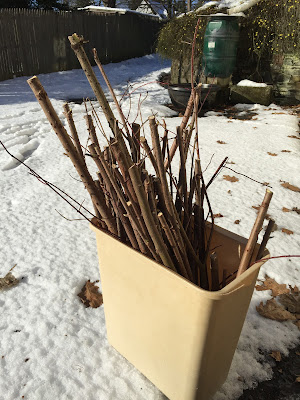 People may not be feeling much affection for branches right now, but here are some stems, collected before the storm, that hold great promise. Called "live stakes," they can be pushed into soft ground to make new shrubs from old. 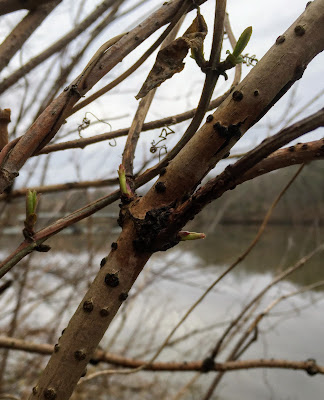 Elderberry is one of a select few native shrubs that will sprout roots and leaves after a cut section is stuck in the ground. In the wild, they grow in sunny spots in floodplains, and have big plates of white flowers in the summer. The berries are delicious in jellies and pies, and their abundance can overwhelm even the appetite of the catbird that otherwise steals all our backyard fruit crop. 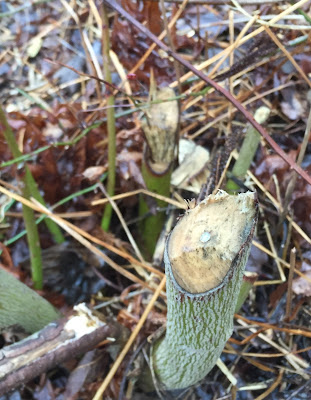 Another is silky dogwood, related to flowering dogwood but less ornamental. It, too, grows along the canal, and can be selectively pruned so as to leave the original shrub intact but yield some nice live stakes for planting elsewhere. This stub was left not by us but by a hungry beaver living in Carnegie Lake.

Buttonbush, with its golfball sized blooms that are eagerly bumbled over by bumblebees in summer, is another super-easy shrub to propagate in this manner. These we'll harvest not from wild populations but from specimens that were planted as live stakes years ago in raingardens around town. 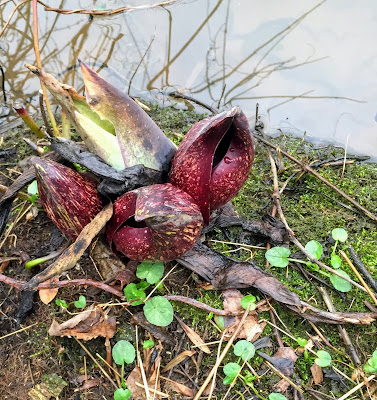 Encountered in the process were some blooms of skunk cabbage. The small, roundish green leaves are the first emergings of lesser celandine, also called fig buttercup, which is a nonnative plant poisonous to wildlife that invades valleys and yards, seducing with its pretty yellow flower before completely taking over. 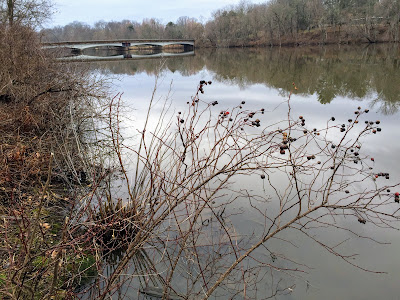 A nice find, though not for live staking, was the swamp rose (Rosa palustris)--a native rose with larger hips and less vicious thorns than the ubiquitous multiflora rose. It needs more stable hydrology than the nonnative multiflora rose. Given historical draining of swamps, eroding of streams, compacting of ground, and other factors that have reduced infiltration and lowered the water table, the swamp rose is now found in only a few places in Princeton. Its species name, "palustris", is used to name many species found growing in marshy ground.

The live stakes will be pushed into the ground at a couple places where we've converted detention basins to native wet meadows, and also at Herrontown Woods next to the parking lot, where we are creating a place where people can see and learn to identify the native plants of Princeton.
Posted by Steve Hiltner at Friday, March 09, 2018