A Summer-Long Residency of Paper Wasps in My Window

Our house is solid, but for some reason there is one storm window that is slightly out of square--just enough that the storm window can't be fully closed. And through that small crack each spring come paper wasps, not to enter the house but to build a nest in the space between inner and outer windows. It starts with a queen--a kind of homesteader, or who in the business world might be called an entrepreneur. I haven't watched closely enough to see if she uses last year's honeycomb of cells or builds new, but at any rate she does the early work herself, as if starting a colony, or a small business, until she can raise young to do most of the work for the rest of the summer. Occasionally I'd take a look to see how they were doing. 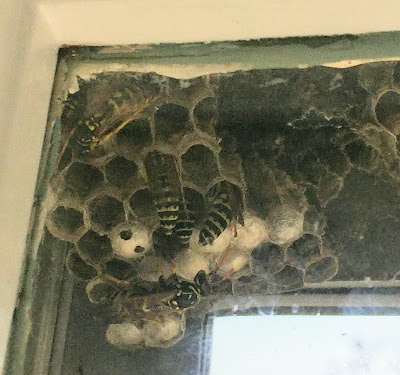 The most common species of paper wasp, it turns out, is originally from Europe. A simple distinction between bees and wasps is that bees are vegetarians and wasps are carnivores. Bees raise their young on protein-rich plant pollen, while wasps feed their young other insects.

My best guess as to what's going on in this picture is that the three wasps with their abdomens sticking out are feeding the young by delivering them food in their chambers. When ready, the larvae cap their chambers, pupate, and then eat their way out as fully formed adults.

Some types of insects, like butterflies and cicadas, have to remain still after emerging, to let their wings slowly expand and dry. But these wasps emerge with their small, narrow wings ready to go. You can see one of the new wasps at the bottom of the photo, emerging like a chick from an egg.

One day in July, I heard a scuffling sound at the window, looked up, 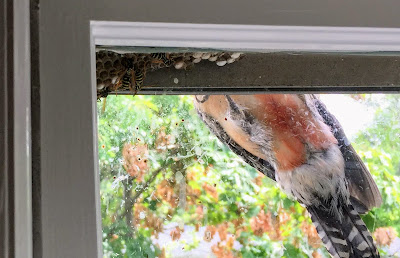 and saw a bird balancing on top of the window. 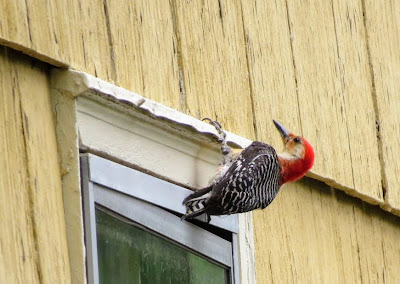 It was a red-bellied woodpecker--a bird named after a part of the body one almost never sees, rather than the red hood that is so distinctive.  From its precarious perch just above the crack in the window, it could use its keen eye, flexible neck, and lightning quick reflexes to snatch any wasps coming or going. 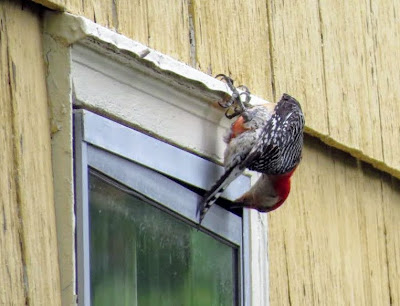 Sometimes it stuck its beak right in the crack, as if my house were a tree.

Finally, the bird noticed me and flew off. Whether this was a singular visit or one of many, the wasp nest was considerably diminished and never regained its earlier hustle and bustle. By the end of August the nest stood empty, which meant I could now open the inside window again.

There are many questions to ask. Do the wasps feed their young regurgitated insect puree, or do they serve sliced and diced versions? Inquiring minds want to know. I spent some time trying to figure out which one was the queen. No wasp stood out as distinctly different from the next. Some of the wasps on the nest were vibrating their abdomens. Others were not. What does this mean? And what impact do the paper wasps have on my garden? Are they responsible for keeping my kale unexpectedly free of caterpillars, and if so, do they nicely limit their diet to garden pests, or are they also preying on the rarer sorts of butterflies and moths we wish there were more of?

I found a few answers at this Galveston County master gardener site. Here are some excerpts:

Adult paper wasps are efficient predators, mostly of caterpillars. They carry them back to the nest and feed them to the developing larvae. They will collect large numbers of caterpillars from the area around the nest during the course of a season. Adult wasps typically prey on a wide variety of caterpillars including corn earworms, armyworms, loopers, and hornworms. Adult wasps also utilize beetle larvae and flies as food for their young..

Adult paper wasps primarily feed on nectar or other sugary solutions such as honeydew and the juices of ripe fruits. Adults also feed on bits of caterpillars or flies that are caught and partially chewed before presenting to their young.

In early fall, the colony begins to produce males and special reproductive female wasps. These reproductive females, which constitute next year�s queens, mate with males and soon leave the nest in search of protected spots in which they spend the winter. The remaining worker wasps eventually die and the nest becomes vacant. Paper wasps will not reuse their nests the next year.

Even some websites that are trying to sell products or pest control services have useful info, such as this comparison of paper wasps and yellow jackets.

I sometimes think of fixing the window, but I suspect that, come next spring, a lone queen of the paper wasp variety will come along and still find a suitable spot to take up residence. Maybe that's for the best.