Wherein is discussed the season's paucity of pollinators, the curiously prolific presence of hornets, and possible causes thereof.

With the coming and the going of this year's autumnal equinox, it's time to look back on a long summer and ask, "What happened?" Or, more precisely, "What happened to the happening that didn't happen?"

There's lots of talk about how insects are in decline and that we need to plant more wildflowers to support them. A local ecologist and avid birder, David Wilcove, co-wrote an oped in the Washington Post about the danger posed by insect decline, and the need to better monitor populations, as is done with birds.

In past years, a summer's climactic buzzfest on the boneset

This year, there was a steep decline in pollinator numbers in Princeton. Each year I grow a banquet of wildflowers in my backyard for all manner of insects to feast upon. In past years, they'd come from near and far, their numbers building through summer, climaxing in late August in a buzzfest on the boneset. Though mountain mint is another great draw for insects, in my yard it was boneset in particular, clustered here and there in the garden, that in past years drew the multitudinous shapes and sizes of the insect world. Its broad disks of tiny white flowers seemed like a Serengeti in miniature, an open plain perched conveniently four feet above the ground, teaming with life. It was a chance to see the insects close up, they being so focused on the nectar or each other that they took little notice of me.

Then, two years ago, and again last year, the numbers of insects were down--still numerous but not enough to stir that late-summer's jazzy feeling of frenzied activity. 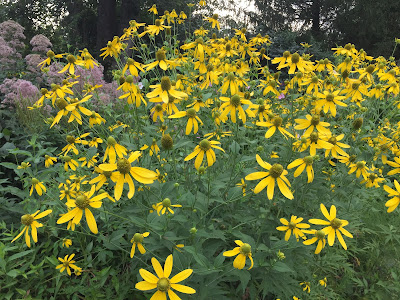 2021: An astonishing diminishment
And this year? This year, boosted by the rains, the wildflowers grew to fabulous size. Broad arrays of blooms mounted on multiple stems stood at the ready. In early summer, while periodical cicadas held center stage, the numbers and variety of pollinators were building nicely. 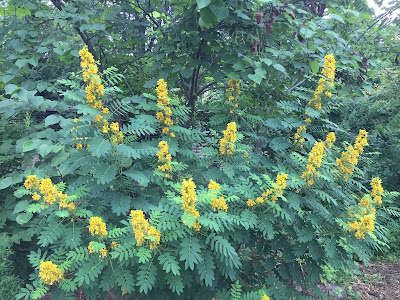 But then, as the wildflower meadow's heavy hitters--the cutleaf coneflowers, Joe-Pye-Weeds, bonesets and wild sennas--unveiled their fabulous blooms for the mid-summer festival of nectar, the insects were no-shows. Abundant flowers had few pollinators, and sometimes none at all. Diversity dwindled to some tiny somethings, a few bumblebees and even fewer honey bees.
Sifting through possible causes for the decline
Possible causes for the dramatic decline have been offered: extreme heat, more homeowners fogging their yards for mosquitoes, expanding monocultures of lawn and invasive species. Or perhaps the climate-changed winters have messed with insect dormancy.
The rains of July, the rains of August
What I have particularly noticed over the past three years, however, is the increase in rain during the summer. Rutgers precipitation data for NJ show increased precipitation particularly over the past two years in July and August. Not only has there been more rain, but the intensity of the rain has increased. The sound on the roof is different--one can hear and even feel the extraordinary density and weight of the rain. The deep trauma of Hurricane Ida was the climax among multiple intense storms before and after. The ground and foliage are literally getting beaten up by these deluges. Insects try to hide during storms. Some live in the ground. The harder the rain, the fewer places to hide, and the more likelihood that a ground nest will be flooded out. All that sustained moisture could increase the risk of disease, which an entomologist friend says can play a big role in bee numbers.
Some of us noticed other changes as well. Gladly, the numbers of odorous house ants invading our kitchen were down from previous years. Mosquitoes in our area seemed relatively rare in early summer, though numbers surged later in the season--tiny ones, probably asian tiger mosquitoes. 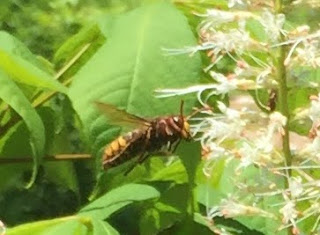 A proliferation of hornets
What was most striking and very strange was a proliferation of hornets. Last year, I seldom saw them, but oftentimes this summer, approaching a patch of flowers, the first thing that would catch my eye was not pollinators but the hornets that can prey upon them.
We have two kinds of insects called hornets. One is the European hornet, which looks to me like a stocky bee--black markings with a particularly thick yellow abdomen. 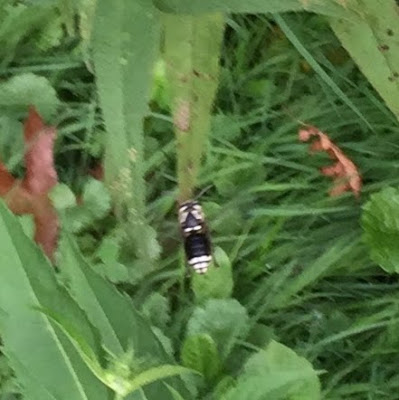 The other is the bald-faced hornet, a native insect with black markings and a whitish face.
Both are hard to photograph because they don't land, but instead keep cruising around the flowers. Periodically they may bump into a bee that was minding its own business on a flower. The contact lasts a split second, then the hornet flies on. The purpose of this brief harassment is not clear. 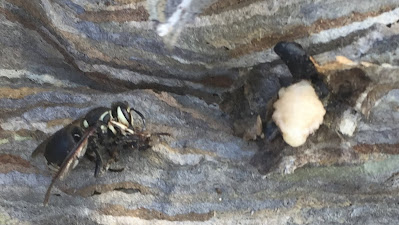 Here's a bald-faced hornet in adult and larval form, found on a fragrant of nest someone left at the curb. Both kinds of hornets live in nests that are in or hang from trees. The paper they make, by the way, is beautiful when looked at close up.
Why the proliferation of hornets, cruising relentlessly among the flowers with a sense of urgency but no clear goal? Maybe they just seemed more numerous due to the lack of other insects to catch one's attention. Or maybe the fact that they live in elevated, waterproof nests allowed them to better survive the intense storms.
The seeds of change planted over centuries
In any case, this summer was not the lively pollinator party I was used to playing host to, both in my backyard and at our Botanical Art Garden (the "Barden") in Herrontown Woods. One interpretation is that the carbon dioxide we've been scattering to the winds is now coming home to roost, in the form of weird winters and intensified storms. In Princeton, basements flooded that had never flooded before. It's not a stretch to hypothesize that many bees also find themselves newly vulnerable to the merciless power of the rain. And then, on the sunny days when pollinators can make it to the flowers, there's the haunting background of patrolling hornets. 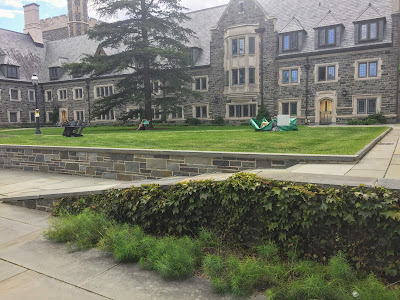 In a docile wasp, some small comfort
As students returned to the university, I remembered helping my daughter move in to Whitman College two years ago. In the courtyard, I had noticed thousands of wasps cruising just above the grass. It was a mating dance, of no danger to the parents and students passing by, of blue-winged wasps. I had recognized their distinctive orange abdomen from those that would frequent the flowers in my backyard, a mile away from campus.
This year, I had seen only one in my yard, and wondered whether their improbable annual ritual was still playing out at Whitman College. 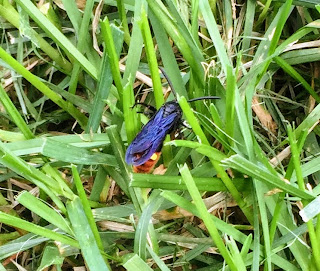 What I found on Sept 2nd were perhaps a hundred wasps flying in their usual criss-cross manner a foot above the lawn. Some seemed fatigued by it all, and would abandon their flight to sit among the grass blades for awhile. Though their numbers were down from the thousands I'd seen two years prior, I was glad to see any at all. And a student sitting in a lawn chair, scrutinizing his computer, told me there had been many more ten days prior when students first began moving in.
It would be nice to think that the paucity of pollinators I observed this summer was an isolated affair. But others around New Jersey have made similar reports. An entomologist friend who lives in Oregon told me that he's seen "a very significant decline in pollinators" this year, probably due to drought, though he also said that each species can vary in numbers year to year.
An ark is built of something more than flowers
We take so much for granted in our lives. When something breaks, that's when one has to study up and figure out how it works, what went wrong, and how possibly to fix it. The insect world has been taken for granted since forever. Annual bird surveys benefit from a community of avid birders, but citizen scientists who are up to speed on the mind-boggling diversity of insects are fewer to come by. We thought we could just plant some flowers and the insects would come, but the needs appear to be far deeper than that.
Posted by Steve Hiltner at Thursday, September 30, 2021