One of the more noxious invasive plants that has been spreading across NJ is Mile-a-Minute. It's a prickly vine that, though an annual that must grow back from seed each spring, grows so fast that it can cover large areas of roadsides and field edges. Over the past several years, I've been knocking out small infestations at the Princeton Battlefield and near Rogers Refuge, but this year I'm finding new patches springing up around town. 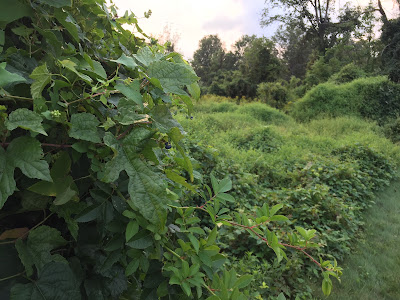 Then, driving my daughter to MarketFair along Canal Pointe Blvd a week ago, I saw a massive infestation that surely is a major source of the seeds that birds are then spreading across Princeton. 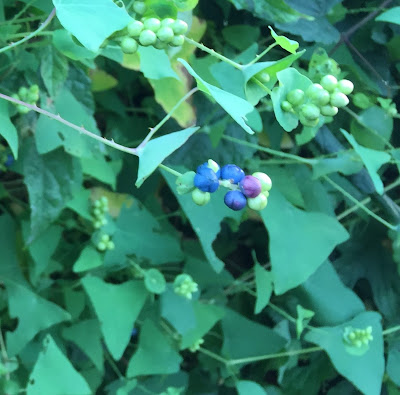 The vine has a distinctive triangular leaf. Berries are just beginning to ripen. If you encounter it, put some gloves on, pull it out and put it in the trash. Putting it in the compost would allow the seeds to spread. 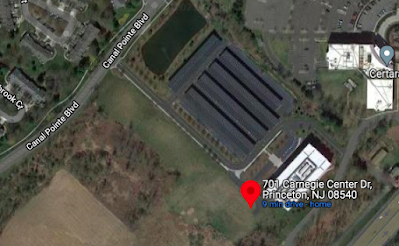 The infestation along Canal Pointe Blvd is behind 701 Carnegie Center Drive. In the aerial, you can see rows of solar panels over the parking lot. To the left of the solar panels is a big mowed lawn, and to the left of the lawn in the photo is the unmowed land upon which the Mile a Minute is growing. My friend Peter researched the owner, which on the deed appears to be "BXP Carnegie Owner, LLC%G". The land has a farm easement, so is only valued at $39,000, which means the owner is paying next to no taxes to hold very valuable property, meanwhile expediting the spread of Mile a Minute and the associated nuisance it will cause. 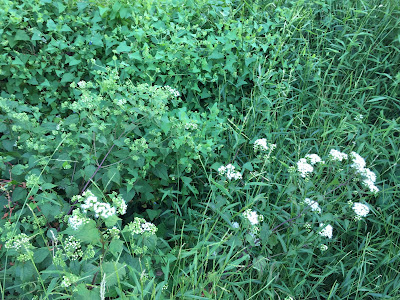 It's hard to photograph the cocktail of invasive species at the site. The white flowers are of white snakeroot, a native wildflower, which is besieged by a layer cake of stiltgrass, porcelainberry, and Mile a Minute climbing on top of it all.
Further down the road is a series of trees damaged, perhaps by a small tornado or similar localized intense winds as the remains of Hurricane Ida came through on Sept. 1. Similar damage to trees was seen in Princeton Battlefield, where a row of mature white pines along the edge of the field was decapitated.
What we're seeing is the increasing impact of plants out of place (species that turn invasive after being introduced from other continents) and carbon out of place (carbon fuels extracted from underground that we burn, thereby releasing additional carbon dioxide into the atmosphere). Our machines have increased global warming CO2 by a whopping 50% over pre-industrial levels thus far. This year has felt like a radicalization of both invasive species and climate change.
Posted by Steve Hiltner at Sunday, September 19, 2021