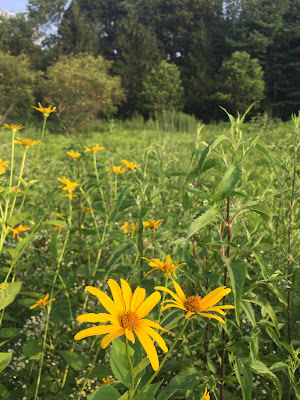 Another in my writings about the ecological, logistical, and psychological aspects of tending to a detention basin at Smoyer Park that we converted into a native meadow. Most of the photos and writing are from mid-July, 2021.

There's a garden that many people pass by but few notice. I saw my second monarch butterfly of the season there in mid-July, attracted to the subtle flowering going on there. It's at the far end of the parking lot in Smoyer Park, out Snowden Lane. Drive or bike down to the lower end of the lot, and by heading downhill, you're essentially following the water, doing what rain does after it hits the ground. And there you will find what most people, if they have any name for it at all, will call a detention basin, so-called because it detains runoff, slowing it down, capturing it in a depression so that it can seep into the ground and feed the aquifer rather than feed a flood.

Bureaucracies require it, engineers designed it, but probably none of them were thinking about what a great place this wet, sunny spot would be to grow native plants. That came later, when another arm of the government, Partners for Fish and Wildlife, worked with me and the town to turn this previously mowed space into what could more aptly be called a wild garden, or a wetland garden, or a wet meadow.

"Depression" is a word that in psychology may have a negative connotation, and extended depression is surely something one would want to cure. But if you're an artist of some sort, a depression may mean the mind is doing important work at a very deep level, putting things together in a new way that may lead to a burst of creativity, insight, or both. To experience highs, one must be able to experience lows. 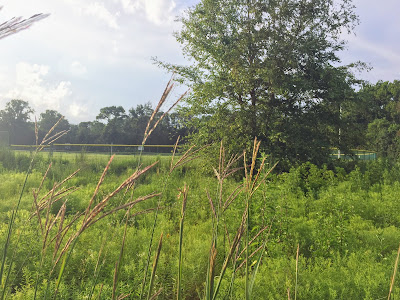 Nature, too, needs its lows, even though depressions in the ground, too, tend to get a bad rap. "Drain the swamp" is a politician's stirring call to clean up the mess inside the beltway, and lots of swamps were drained when they got in the way of expanding our towns, cities, and farms. But as with people, a depression is where nature does some of its deepest thinking and finest work, feeding the aquifer and laying the foundation for foodchains with a rich variety of native plants. Gardeners like to lift plants up in raised beds, but many native wildflowers prefer the opposite, somewhere low down. Those are the seedheads of big bluestem in the photo, a dominant prairie grass in tallgrass prairies of the midwest, historically munched on by bison.

You can see a fence bordering one of the ballfields at Smoyer Park in the distance, and most of the surprisingly many detention basins scattered across the Princeton landscape, in developments or at parks, are managed like a ballfield, with grass mowed to the ground, though no one would think to play a game there. One thing I've managed to do in town is get some of these converted to wet meadows--first at Farmview Fields, then at Princeton High School, then at Greenway Meadows and Smoyer Park. 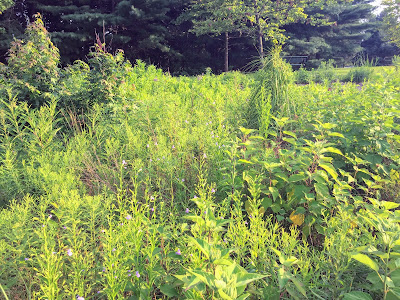 I walked through the Smoyer Park wet meadow in mid-July, to see how it's doing and to do some weeding of this half-acre wild garden. As any gardener knows, there's a lot that can go wrong, even in a meadow that's supposed to grow naturally. Many of these raingarden-like plantings, if untended, fill with a host of aggressive weeds, like mugwort, Canada thistle, and Chinese bushclover (also called Sericea lespedeza). Even natives like blackberry and some kinds of goldenrods can tend to take over.
Nature is complex, which can be daunting and even off-putting, or exciting for those who take an interest and build familiarity one plant at a time. That's where love comes in, because when you love something, you want to know everything about it. Botanists talk about plants like a baseball fan might take pleasure in quoting obscure statistics or reminiscing about certain players. Love turns complexity into joy. Love is also what gets one out there to check up on a wild garden, to make sure it's doing okay.
Knowing how much can go wrong can increase the pleasure at seeing so much going right. Now, this photo shows little in the way of blooms, but a gardener conversant with the species of a wild meadow can experience joy even before plants flower, is moved as much by what will be as what already is. Each stem of a favorite wildflower implies a bud, each bud a flower, and each flower a host of insects that in turn support a foodchain of wild life.
A botanist gardener can see in this photo the spray of monkeyflowers in the lower left, the burst of rose mallow hibiscus in the center right, and behind them a favorite sedge called woolgrass rising towards maturity. Other species, too, are gaining in number and moving towards bloom--ironweed, partridge pea, blue vervain. From evidence of browsed stems, even the deer's appetites seem in balance, leaving many plants to grow unhindered. The diverse mix of sizes and textures triggers memories of other rich meadows seen--prairies in Ann Arbor, MI, Durham, NC, Chicago. How many people get to travel back in time and across half a continent, just by weeding a detention basin in a park in Princeton?
Occasionally, a less sanguine thought can intrude. What difference does it make that a half acre meadow is prospering, when a whole planet is so quickly being overheated? Delight in mid-July could not completely eclipse news heard earlier that day, of environmental and cultural devastation in Europe, as an overheated atmosphere unleashed a flood that shattered all records.
September 12, 2021
Since mid-July, Princeton had its own megaflood when Hurricane Ida swept through the night of Sept. 1. Basements flooded that had never flooded before. The DR Canal towpath was badly damaged, ten years after being similarly damaged by Hurricane Irene, and only two years after being fitted with a fresh cinder surface for walking, biking, and jogging.
But one place I didn't worry about getting flooded was the detention basin at Smoyer Park. It's built for flooding, and fitted with native plants that have evolved to thrive on periodic floods. Though, being the caretaker, I will be worrying about whether I could be doing more to limit the spread of stiltgrass, carpgrass, canada thistle, blackberry, and various other overly aggressive species, to a passerby the meadow has a late-summer look of subtle earth tone radiance and balance. The white in the distance is late-flowering thoroughwort, mixing with the emerging yellows of goldenrod, a few lingering spikes of purple from the ironweed, and the bronze of tallgrass prairie species--big bluestem and Indian grass. 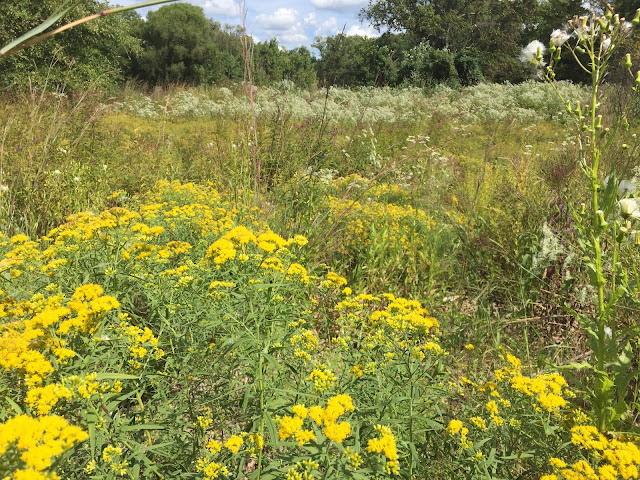 Last year's post about Smoyer Park's basin: The Work Behind a Natural-Looking Meadow
Posted by Steve Hiltner at Sunday, September 12, 2021