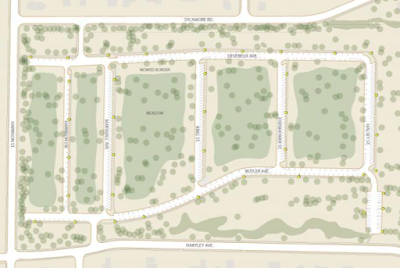 This is the story of what can go wrong if you plant a native meadow and then don't take care of it. Princeton University has been installing some native meadows, and some have done a lot better than others.
Just off of South Harrison Street, framed by Sycamore Rd and Hartley Ave, are some meadows that were planted in 2016 following the university's demolition of the Butler apartments. It was a well intended succession from graduate housing to native meadow, and when I took a look in 2019, the meadows were still hosting diverse native wildflowers. 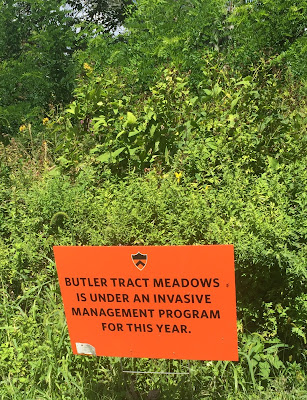 "Butler Tract Meadows is under an invasive management program for this year."

For most of the summer, it wasn't clear what that meant. The signs appeared early in the growing season, but I could find no sign of any action. 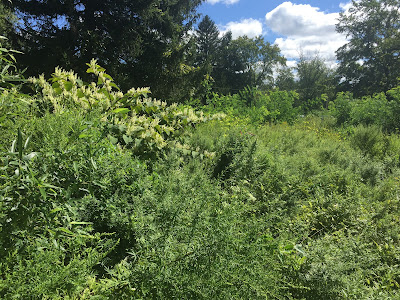 This photo tells the story of what happened to the native meadow over the course of five years. The usual nonnative invasive species moved in and began to dominate, with mugwort foremost among them. The white flowering plant on the left is Japanese knotweed, which can form large monocultures as well. Bamboo is getting a foothold in the lower lefthand corner of the photo, and in the distance can be seen the sproutings of black locust, a native tree that nonetheless can move aggressively into native grasslands. 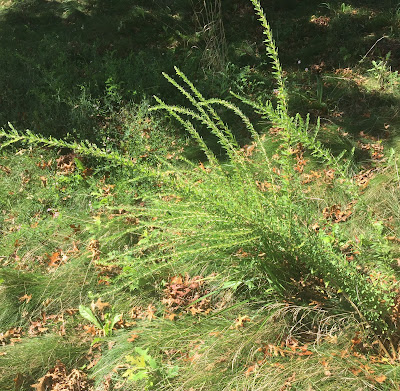 Sericea lespedeza (L. cuneata) is another super-aggressive nonnative. Newer on the Princeton scene, it can rival mugwort in its capacity to displace diverse native plants, for instance along the gasline right of way that crosses the Princeton Ridge. 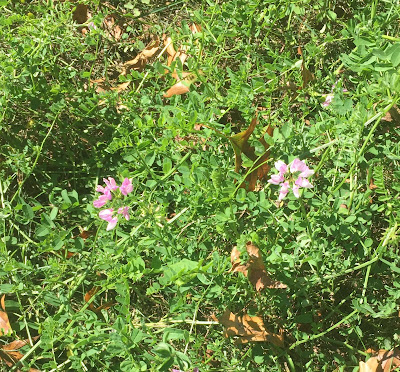 And here's crown vetch, which climbs over everything around it. Both crown vetch and Sericea lespedeza were planted extensively along freeways to control soil erosion, reducing one environmental harm while creating another. 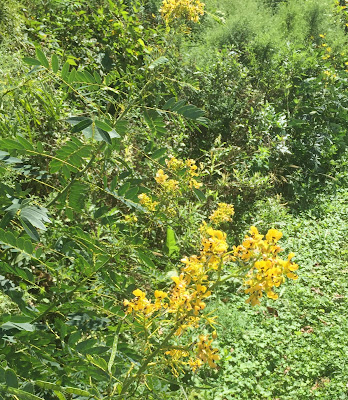 I did notice a few native species still present, including this wild senna. The only practical means of shifting the balance back to the native species on this scale is through use of herbicides. Some people lump all herbicides together and pronounce them evil poisons--an indiscriminate rejection borne of their often indiscriminate use. But there are many kinds and many formulations, some far safer than others, and the aim as with medicines for people is to use as little as possible, in a targeted way.
The way to reduce the use of herbicides is to be proactive and intervene early to kill the invasives when they are still few in number. That would have been something to do from the beginning, back when a more targeted, minimalist approach was possible. 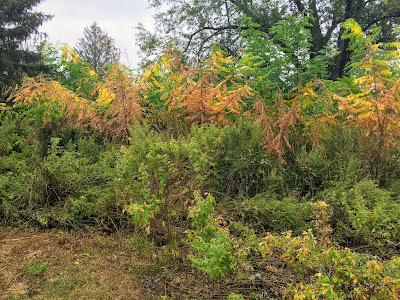 My friend Basha who lives across from the Butler Tract told me they had finally done some spraying. A week later, I took a look. Here you can see the black locust tree sprouts turning brown while many other invasive plants appear untouched. 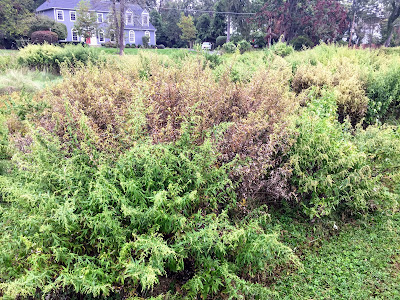 This big patch of mugwort shows some sign of dieback, but pretty uneven results thus far. 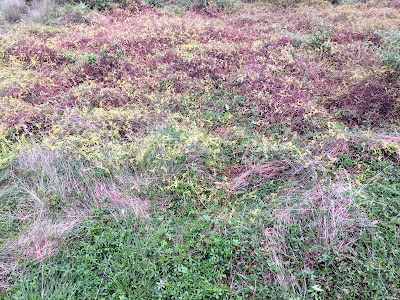 I'm guessing that patch in the background of this photo was crown vetch. In the foreground is probably common cinquefoil (Potentilla simplex), which is native but a very rapid spreader.
It will be interesting to see how this goes. My experience is that institutions have always understood that lawns and landscaping take ongoing care, but they have yet to grasp that more naturalistic areas like meadows also need ongoing intervention. At the Butler Tract, they seem to be trying to figure out what that means.
Posted by Steve Hiltner at Saturday, September 18, 2021