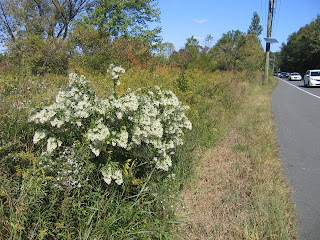 What's that bright, beautiful white bush blooming with the goldenrods, up the road from the Mercer County fire training facility behind Quaker Bridge Mall? Why, it's Baccharis halimifolia, the groundsel tree, up from the coast.

Baccharis is native to the coast, and gloriously beautiful, but when I lived in North Carolina, it had traveled up the highway corridors from its native coastal territory and had started invading the prairie openings of the piedmont in a startlingly aggressive manner. 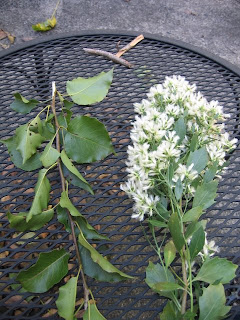 The same piedmont extends up the coast to Princeton, so I'm a little worried that Baccharis could behave similarly here. But for now, it seems minor compared to relatively new invaders like Callery pear (on the left in this photo).

If you happen to take the train to New York over the next couple weeks, keep an eye out for Baccharis shrubs covered with white flowers, and send me an email if you see any. It would be interesting to know if it's migrating inland along the rail line.

The species name, "halimifolia", could refer to its leaf shape being similar to witch hazel's (genus Hamamelis), but this is speculation. In searching for confirmation, I found a website that describes Baccharis's invasive tendencies in Europe and Australia, as well as southeastern grazing land. The plant is toxic to animals, so its invasion of a pasture or grassland and resulting displacement of other species can render the landscape inedible over time. There are several kinds of insects that feed on it along the Atlantic coast. By migrating to the piedmont, it may have escaped the insects that normally would keep its numbers in ecological balance.
Posted by Steve Hiltner at Thursday, October 21, 2010