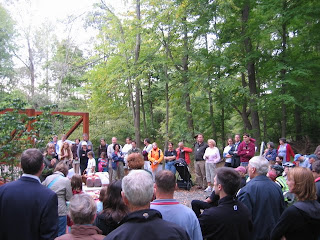 From earlier in the month:

Auspicious weather accompanied a gathering on October 3rd to dedicate the new pedestrian bridge over the StonyBrook behind Hun School. 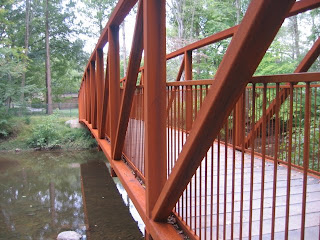 Funded mostly through a federal grant, the bridge is a vital link in a circum-Princeton trail originally envisioned by a small group of trail advocates in town, including Helmut Schwab and Ted Thomas, long time trustees with Friends of Princeton Open Space. 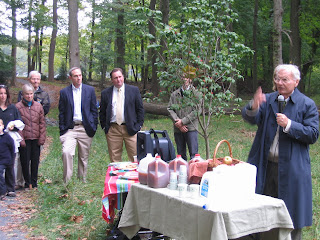 The bridge would not have been built if not for the persistence of Helmut Schwab. At the dedication, Helmut gave an account of how the bridge came into being. It was first imagined by local architect Ron Berlin, one of four people who explored the perimeters of town in search of routes for the circum-Princeton trail. Though the township successfully applied for a $500,000 federal grant, the project remained in limbo for many years for lack of a plausible way to make the bridge handicapped accessible--a stipulation of the grant. Helmut was finally able to solve the puzzle, gaining help and cooperation from FOPOS, DR Greenway, the Hun School, Princeton Township, Jazna Polana, and the owner of a key parcel of land that allowed room for the switchback trail needed for handicapped accessibility. In his speech, Helmut urged everyone to make a difference in the small part of the world each of us navigates. 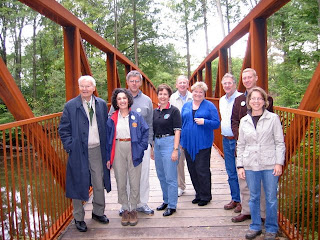 I don't know everyone here, but can tell you that Helmut Schwab is on the left, followed by former township mayor Phyllis Marchand and Bill Rawlyk of D.R.Greenway. Chief township engineer Bob Kiser is in the far back. On the right are members of Bob's engineering staff, Anthony Soriano--writer of the grant application--and Deanna Stockton, who attended to the myriad details of the construction project. 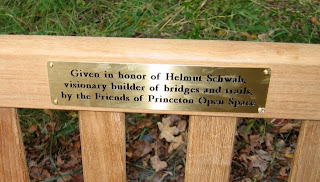 Friends of Princeton Open Space provided a bench to be placed next to the bridge, honoring Helmut's work.

The bridge can be accessed from a small parking lot just down from the Jasna Polana golf course, or from a beautiful trail that follows the Stony Brook down from Greenway Meadows Park.
Posted by Steve Hiltner at Sunday, October 31, 2010