The Flora and Tiny Fauna of Camp Sacajawea 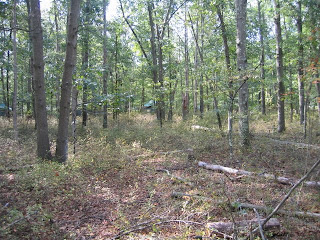 When I was a kid, my family would drive to northern Wisconsin to help set up and take down the tents and pier at a girl scout camp. Last month, I went along with my daughter's troop to one of New Jersey's versions, down in the pinelands.

What I found, in stark contrast to the Princeton area, was a nearly all-native forest, with fields of highbush and lowbush blueberries beneath an open canopy of oaks and other hardwoods. 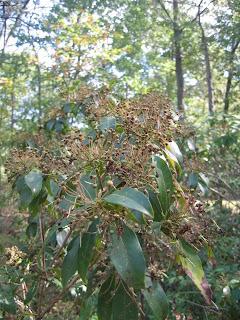 Mountain laurels that had the benefit of sunlight from an opening in the canopy were loaded with spent flowers, suggesting quite a show earlier in the year. 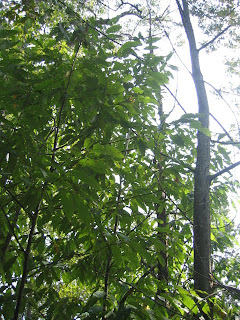 The resident ranger was glad to know about a native chestnut tree I found there. On the left are new stems sprouting from the roots after an older stem, right, was killed by the blight. Since the blight, introduced accidentally to America around 1900, kills only the above ground portion of the tree, new shoots keep emerging, to grow until the blight again sets in. 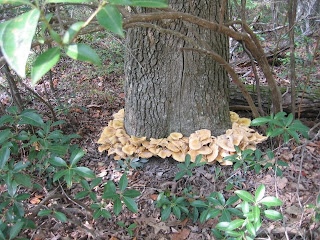 One reason the canopy was open enough to support a healthy understory was the attrition of some of the oaks. Though the numerous white oaks were not affected, quite a few red oaks and black oaks were succumbing. Here, the base of one of the dead trees is ringed by the fruiting bodies of a fungus, which may have contributed to the tree's decline, or merely moved in when the tree was already weakened by some other factor. 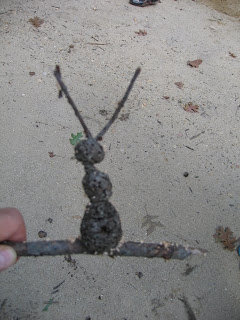 A look up into the canopy of the dying trees revealed many swollen branches. Some internet research suggests the trees were succumbing to a severe infestation of gouty oak gall, perpetrated by a tiny, non-stinging wasp. The adult wasp lays eggs in new stems in the spring. Chemicals emitted by the wasps fool with the tree's growth chemistry, causing the twigs to swell into convenient houses for the wasp larvae to live in and feed on. This one we decided looked like a snowman, or an ant. 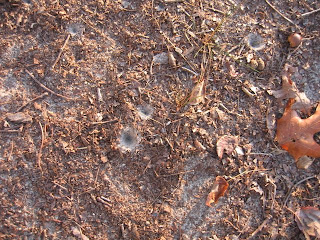 Speaking of ants, the kids and parents were very surprised to learn that there was a thriving ant lion community beneath their feet. The ant lions are little insects that make small cone-shaped craters in the sandy soil along the edges of roads and paths. When an ant accidentally stumbles into one of the craters, it slides down to the bottom, where it is grabbed by the mandibles of an ant lion hiding in the sandy wall.
Posted by Steve Hiltner at Wednesday, October 20, 2010