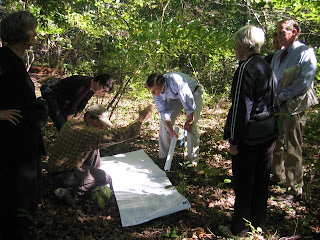 Members of the Princeton Environmental Commission (that would be me) and the Planning Commission got a chance to tour the sight of an upcoming stream restoration in the valley between Washington Road and the new Princeton University chemistry building. In the shade of giant blackgums, oaks and beech trees, most of which will be saved, Randy, a specialist in stream restoration at Rutgers, explained the concept and the detail drawings. 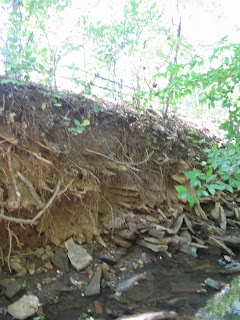 The stream, which drains much of the campus, is very "flashy", meaning that the buildings, roads and well-trodden ground shed water quickly in a storm. The resulting powerful surges of runoff have been busy eroding the streambanks near Washington Road. A healthy stream tames and dissipates the power of storm runoff by overflowing its banks and spreading out into the floodplain. But an eroded stream eventually becomes too deep to overflow, meaning that all the runoff goes surging down the stream channel, dissipating its energy by causing even more erosion. 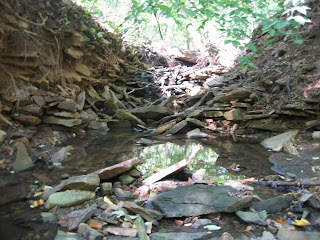 This is an upstream shot of a "headcut", which describes the process by which a stream burdened with unnatural doses of stormwater runoff cuts deeper and deeper into the ground. The headcut is the sudden dropoff--a transition to a new depth that starts at a downstream point and actually migrates up the stream channel until the whole length of the stream has become more deeply incised. As a stream cuts more deeply, it drains the surrounding groundwater, drying out the valley and stressing the plants. This stream is an example of how the town's "hardscape" of buildings and roads has been slowly transforming the local stream corridors.

The goal of the restoration is to prevent headcuts like this, re-establish a natural meander and a floodplain into which the stream can spread out and dissipate the energy from storm surges. Overall, the result should be a stable and naturalistic stream. 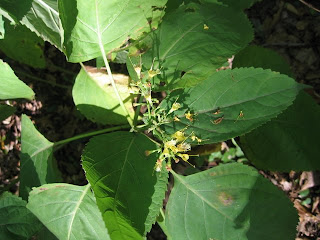 Though exotic plants in the stream corridor will be replaced with native species after the streambed is recontoured, there are exotic shrubs and trees on the upland slopes that need to be removed. I'm hoping to work with university staff to organize removal of these, and also rescue native wildflowers like horsebalm (photo) that would otherwise be bulldozed as part of the stream work.
Posted by Steve Hiltner at Sunday, October 24, 2010