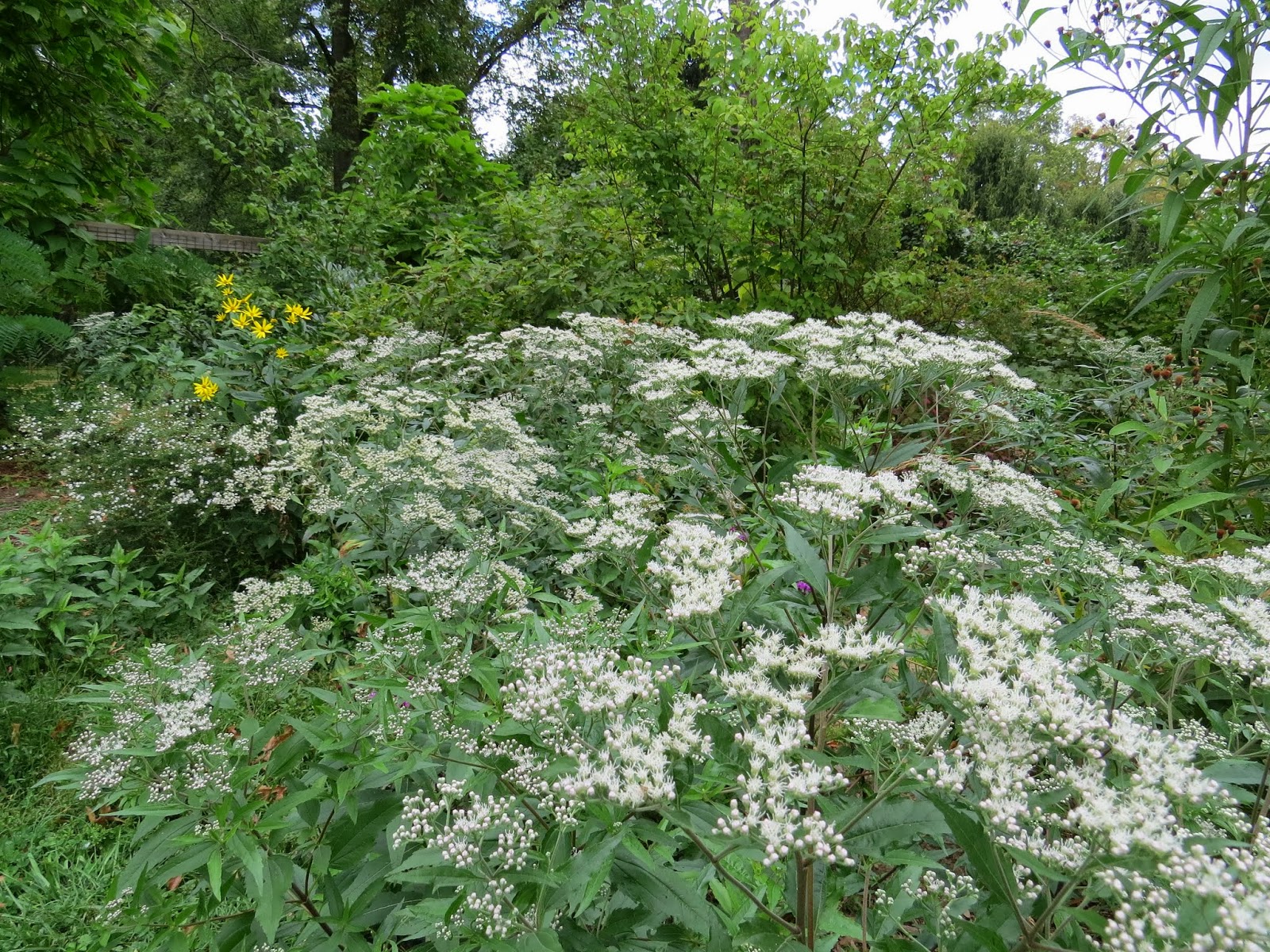 A couple on the street the other day recognized me as a botanist at large, and asked about a flower they'd seen, like boneset but lacking the fused, perfoliate leaves. They summoned a photo on their iPhone. "Late-Flowering Thoroughwort," I announced. Given the length of the name, some people slim it down a bit by replacing "thoroughwort" with "boneset". It's a beautiful, delicate-looking plant, even though it toughs it out along roadsides, and is more common in the wild than boneset. In the garden, it sometimes seems fickle, dying out in one spot then seeding into another. This may have to do with drying out, because the consistent rains this summer have coincided with its most prosperous year in memory. Eupatorium serotinum is the latin name. 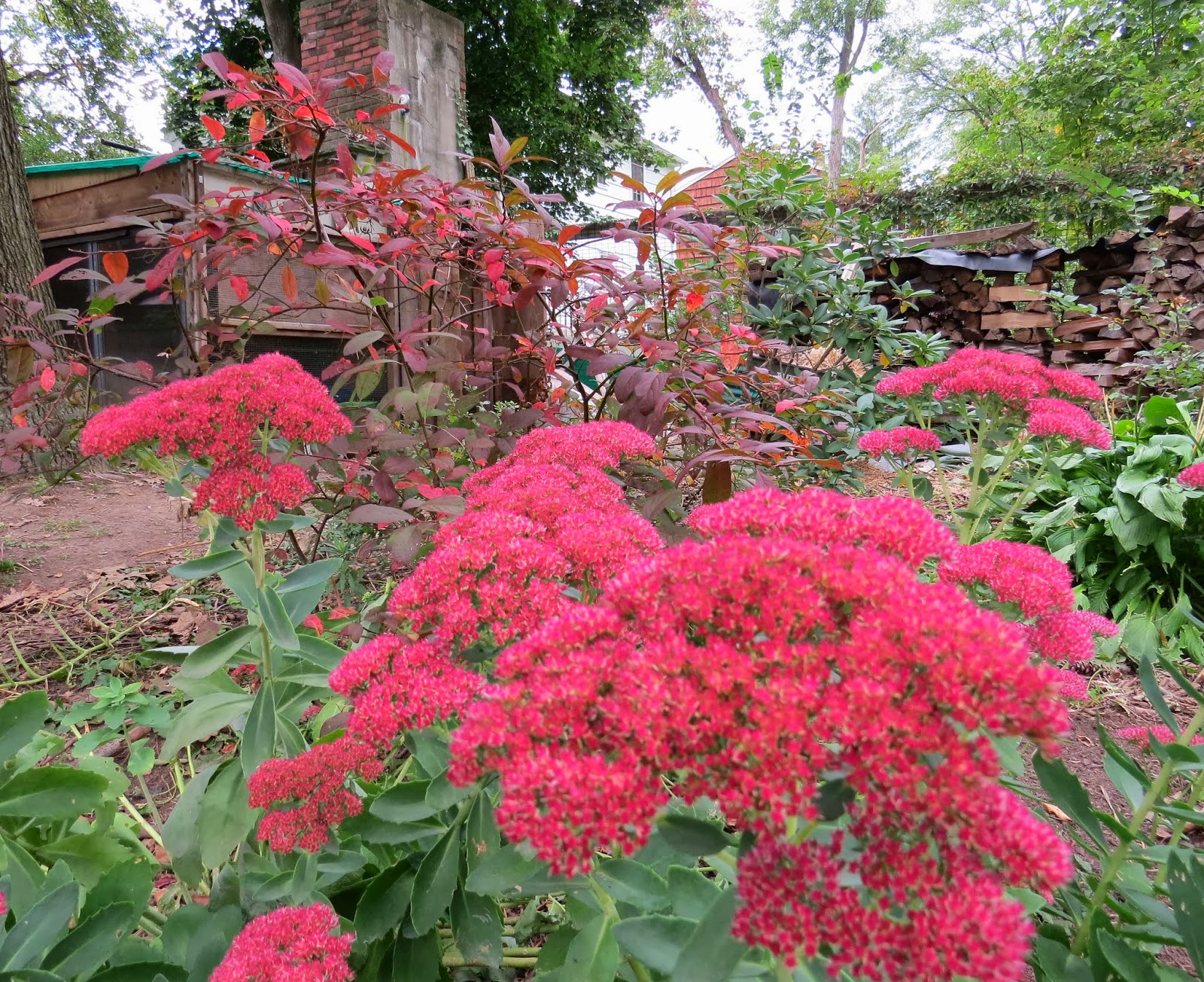 Another favorite, one of the few exotics I still like to plant from my less native-oriented days, is showy stonecrop, here shown with the shrub Virginia sweetspire gaining its rich fall color in the background. This kind of stonecrop (Sedum spectabile, unless you really want to learn the new latin genus name, Hylotelephium ) has a flower that gradually shifts color in the fall from light pink to deep red to a chocolate brown. 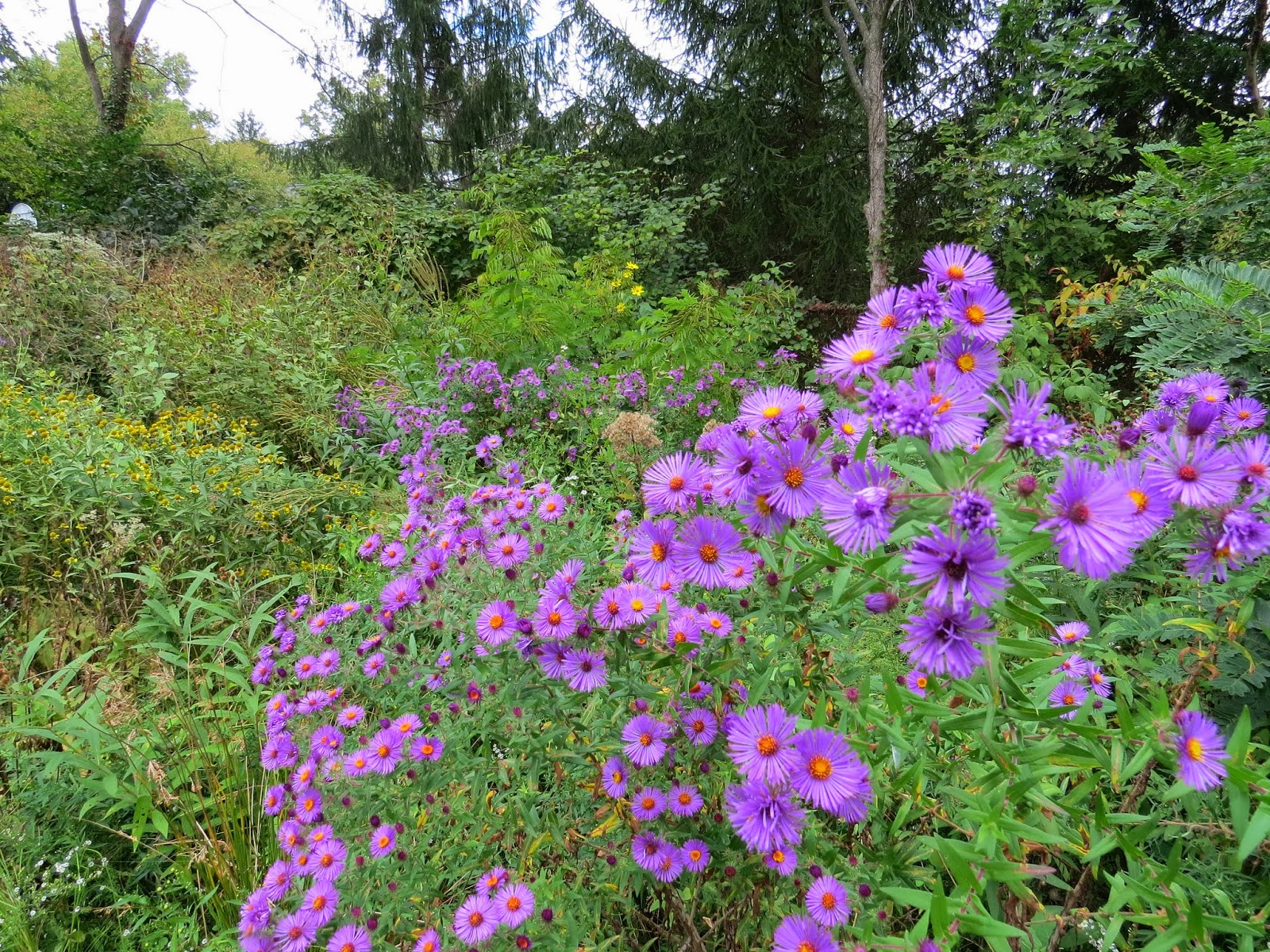 New England aster can look a little lanky in the garden until it finally blooms, at which point it looks just right. It feeds what few monarchs we've had during their fall migration south to Mexico. 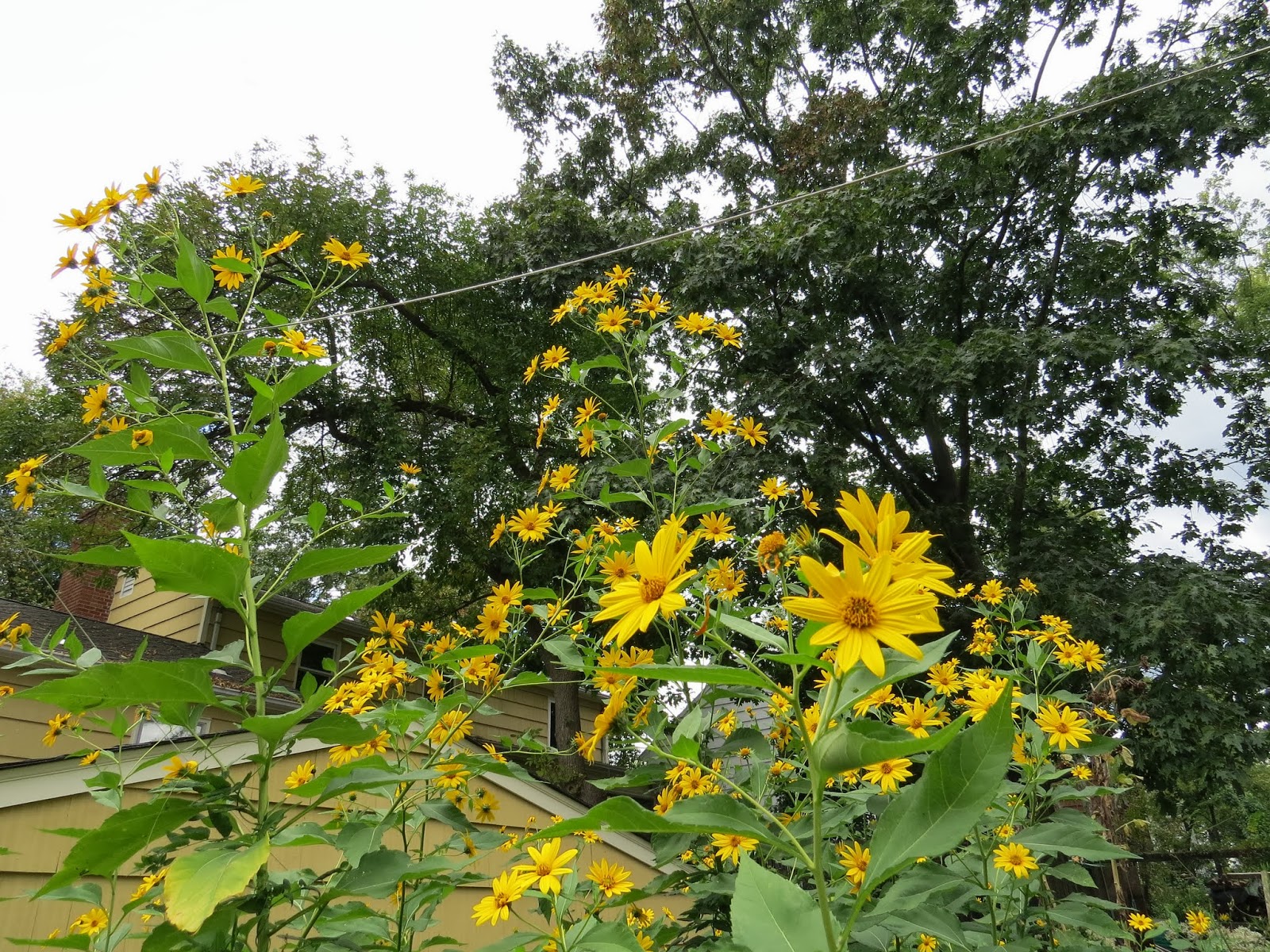 Once again, the sunchokes (Helianthus tuberosa) were allowed to grow, despite vigorous spring pulling of hundreds of shoots. Their splendid flowers this time of year distract from their imperialistic underground spread. What's needed is a human to come along and eat its tubers throughout the winter, so that only a few will be left in the ground to sprout in the spring. Sounds like a win-win, if the resident human will get his act and his appetite together. 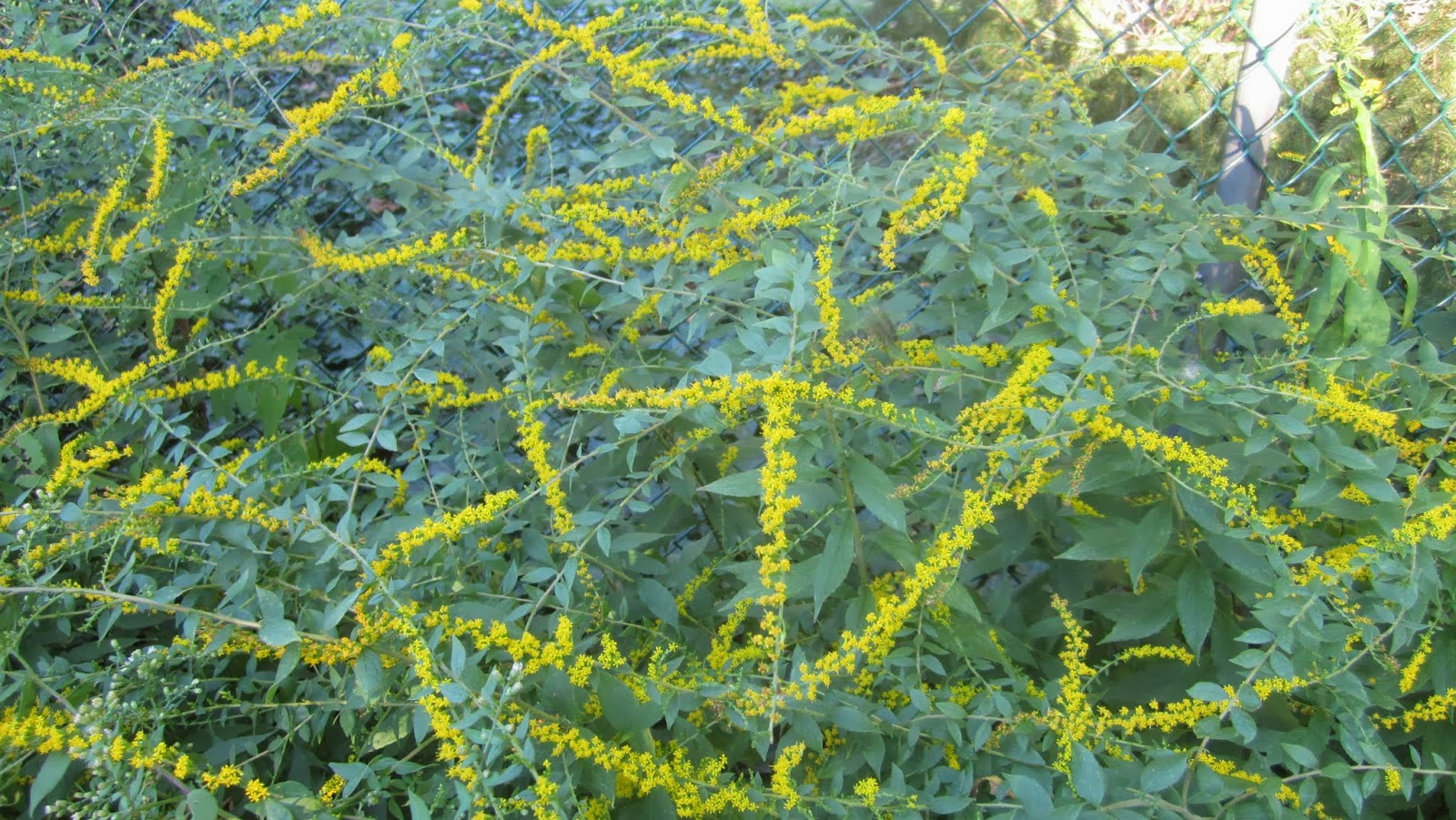 The "Fireworks" goldenrod (Solidago rugosa) grows at the Barbara Boggs Sigmund Park on Hamilton Ave. It's a native originally named by a friend from Durham days, Ken Moore of the North Carolina Botanical Garden.