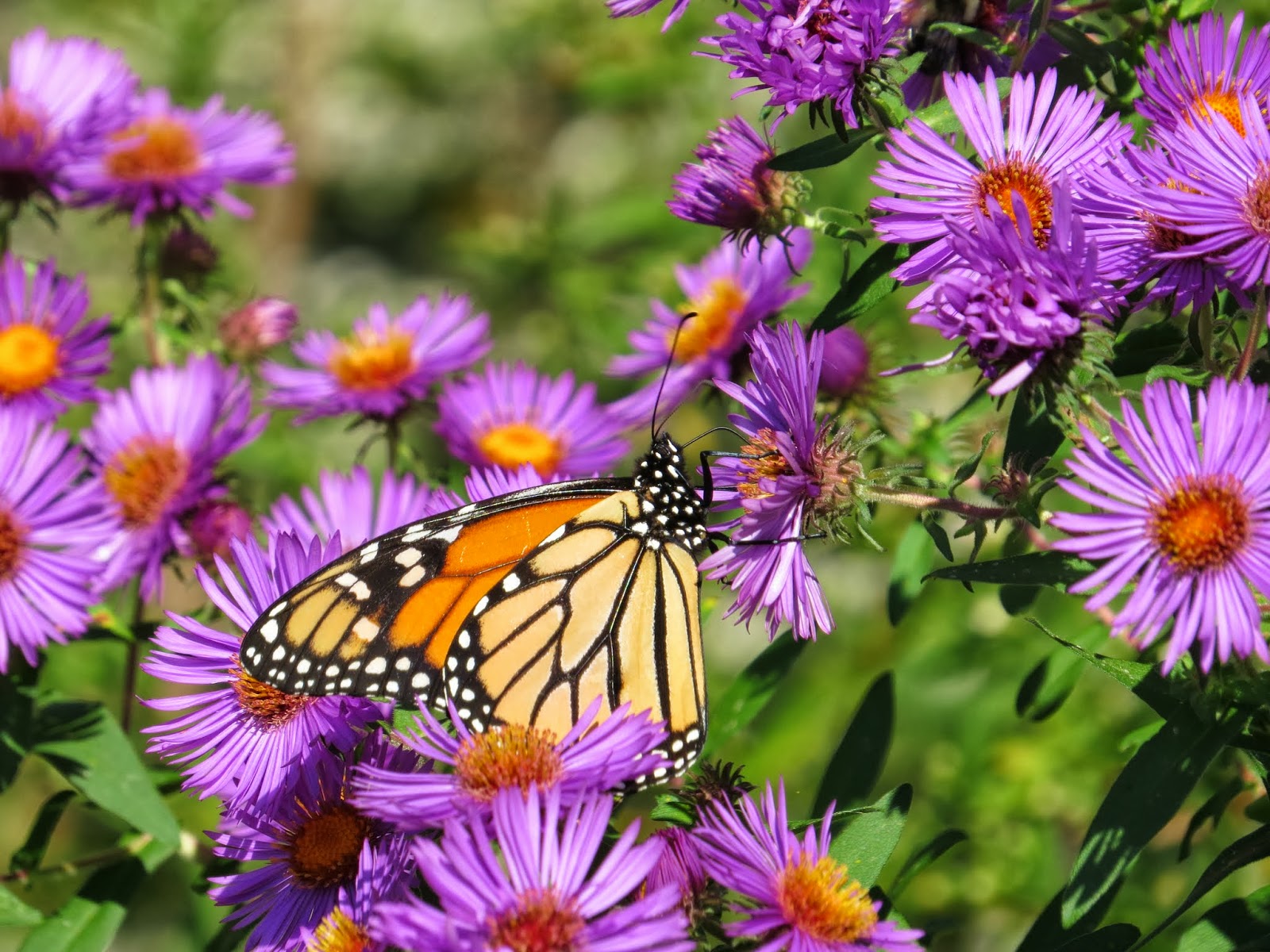 This monarch visited our backyard October 1. Most of its fellow monarchs, what few there have been this year, have long since headed south towards the mountains northwest of Mexico City. A lot of people are worried about their low numbers this year, and are following its fall migration. For periodic updates, there's the monarch monitoring project in Cape May, through which many of New Jersey's monarchs are funneled.

Nationally, the best I have found thus far is the Monarch Butterfly Journey North website, which includes periodic updates and a "Where are the monarchs?" page that details their travails.

As with any complex entity, whether it be a car, the human body, the climate, or an ecosystem, one doesn't need to know how it works unless it starts breaking down. Thus, a lot of attention is being paid to how the monarch migration works, and what is causing it to diminish.

For anyone interested, longtime monarch advocate Chip Taylor offers an indepth look at how migration works, how weather and farming practices are affecting it, and what we can do to help the monarchs prosper. The video's is worth an hour of one's time.

Among my notes from his talk:

Of the 73 species of milkweed growing in the U.S., common milkweed (Asclepias syriaca) supports 90% of the monarch population. It is not found in mature prairie, but rather is adapted to disturbed sites, such as roadsides and farm fields. In the distant past, when prairie covered much of America's heartland, the many species of milkweed that thrived there would have provided the monarch larvae food. But the conversion of nearly all of the original prairie to farms has made the monarchs dependent primarily on the common milkweed that can survive in the farm fields.

Beginning in the 1990s, however, the introduction of "Roundup Ready" GMO corn and soybeans brought about a dramatic transformation in farms across the Midwest. Using Roundup-proof crops allowed the intense spraying of herbicide, which led to the elimination of milkweed from more than 90% of its original farm habitat--about 160 million acres!

Additionally, as government began subsidizing ethanol projection in 2006 or so--an ill-conceived program that speaks more to the political power of sparsely populated cornbelt states and less to common sense--corn demand and prices leaped upwards. Farmers responded by expanding their fields, eliminating fencerows and plowing right up to the road, erasing even more habitat that formerly supported milkweed.

Fire ants, an invasive species introduced from Brazil that preys on butterflies, have also been expanding their range in the south. (For example, I witnessed their mounded nests appearing along right of ways in Durham, NC over the past ten years.)

Though weather has long been variable, global weirding, as it's sometimes called, is making these variations more extreme. A spring that's too warm, a summer that's too cool, a drought that's too deep--all of these can make for low monarch numbers in any given year. One interesting twist is that some drought can actually be a good thing for monarchs, if the dryness reduces the fire ant numbers while not affecting the deep-rooted milkweed.

Conditions in Texas are particularly critical as the monarchs move north from Mexico in the spring. Taylor calls it the "breadbasket" for monarchs, spawning the first new generation that then flies up our way. (Think of the migration as a multi-stage rocket fueled by milkweed, with each generation building on the boost in momentum provided by the previous one, until the season's fourth or fifth generation heads back south in the fall. No fuel, no momentum.) As an example of the impact of extreme weather, he described a phenomenal loss of trees--300 million--across Texas due to the 2011 drought. 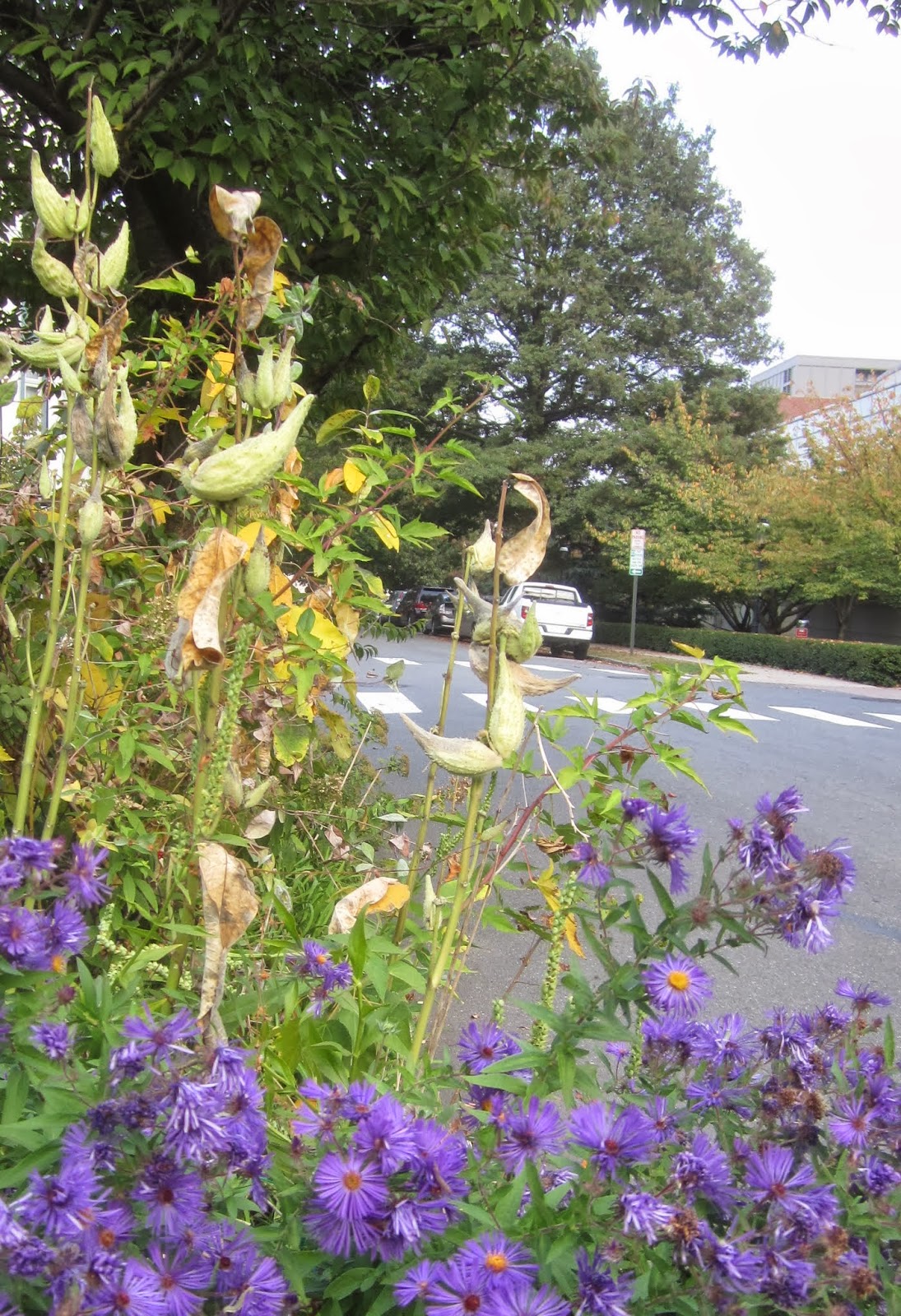 Seeking to compensate in some small way for the human folly that's being perpetrated on a grand landscape scale, they have a WayStation program in which people all over the country register their monarch-oriented gardens. This one in the photo, along William Street, looks like a good candidate. It has two key plants for the monarch--for the larvae, the common milkweed with its light green pods in the background, and for the adults, the New England aster whose bloom is well timed with the monarch's fall migration. Princeton needs more family-oriented restaurants like this one.