Part 2 of Salvaging a Hidden Garden 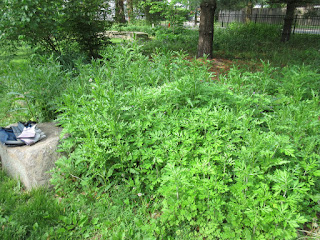 When salvaging a garden like the one at Harrison Street Park, don't be deterred by the wall of mugwort and Canada thistle--the default weeds that swoop in when a garden loses its gardener. 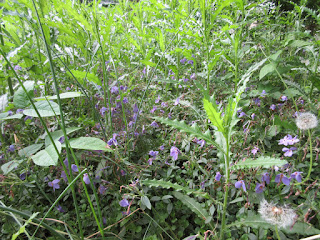 Rather, be encouraged by woodland asters that have improbably survived in this thickening sea of weeds. 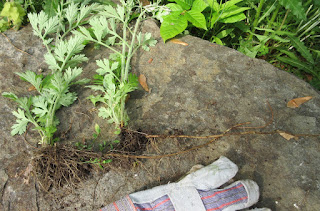 Commence pulling, not with a jerk but with slow, steady pressure so that the mugworts' formidable root systems come up with the plant. 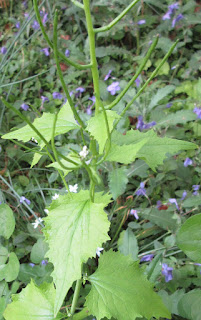 Pull the garlic mustard, too, before its pods mature and shatter. 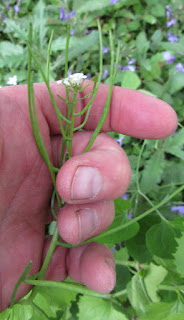 Some bag them up and throw them in the trash, but I don't want to create more trash to haul off to the landfill, and put the garlic mustard instead in one pile that can be monitored for any sprouting the next year. 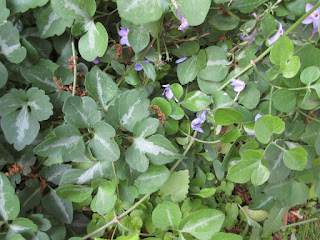 This autumn clematis, though it has a pretty flower, is future trouble, known to form wide ranging underground root systems that sprout all over a garden. Dig it out while the digging is easy. 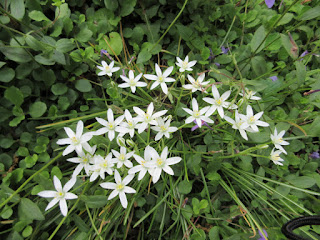 Star of Bethlehem looks innocent enough as well, but can also be invasive. 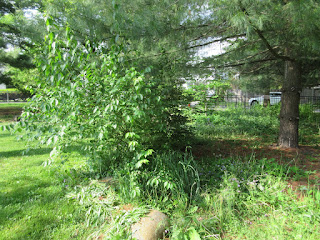 Honeysuckle shrubs, another component of the default landscape asserting itself, block the view of the garden and an attractive stone sitting area that was part of the installation five or six years ago. 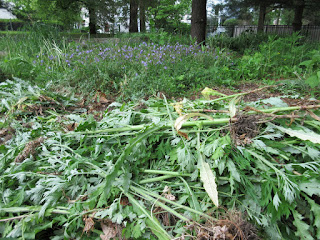 A couple hours of pulling made the original plantings visible again, with the weeds forming a mulch along the edge, left to dry in the sun. If there was a leaf corral in the park to demonstrate sustainable landscaping, the weeds could have been tossed on top of last fall's pile of leaves, to slowly decompose and return to the soil. 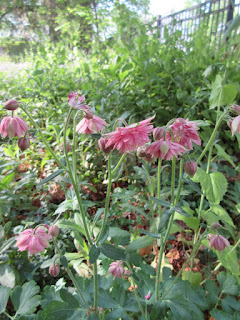 The act of weeding usually leads to some discoveries, like this bred variety of columbine--another remnant from the original planting-- 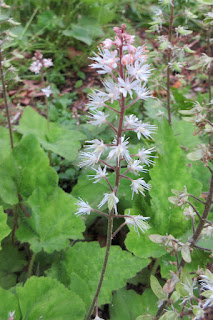 and this more authentic-looking foamflower, which like the woodland phlox is almost never seen in the wild. A garden in an urban park, then, can be a place for people to encounter components of the natural heritage that for one reason or another have not survived in Princeton's nature preserves.
Posted by Stephen Hiltner at Sunday, May 31, 2015