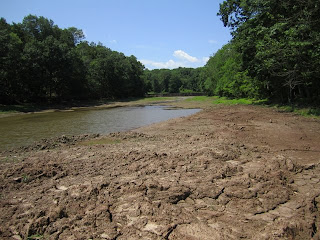 The draining of the lower Mountain Lake, while work  is done to restore and enlarge the lower dam, has led to some interesting discoveries in the 100 years accumulation of sediment. Various rusty saws and pry bars were found, harkening back to the early 1900s when the ice was harvested for Princeton's iceboxes. 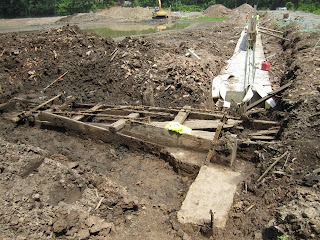 And just this past week workers came upon an old ramp used to transport the big blocks of ice from the lake and lift them up into three story barns just down from the dam. The dams, insulated with hay between double walls, could reportedly store ice for up to two years. 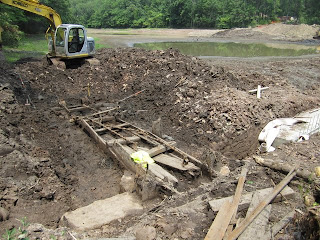 I hear that the plan is to rebury the wooden and steel ramp, in place, since the wood would rapidly decay if not buried in the ooze. Archeologists carefully uncovered, measured and photographed the remnant--a snapshot from a bygone and more earth-friendly era, when refrigeration was imperfect but left little or no carbon footprint.
Posted by Steve Hiltner at Friday, June 17, 2011