When I was a kid, as part of my rigorous early training as a naturalist, I used to put black ants and red ants in a bottle and watch them fight. The black ants were bigger, but the red ants were more energetic.

One day, I came across a major battle being waged by the red and black ant kingdoms in the backyard. Being partial to black ants, I quickly stomped out all the red ones, only to realize that it would have been much more interesting to have watched the battle unfold. 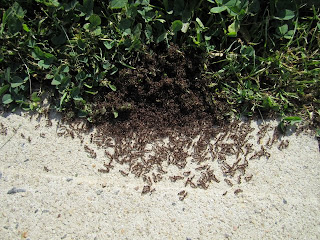 Recently, on the way home from the Princeton Shopping Center, I noticed a similar "Where's Waldo" spectacle at the edge of the sidewalk. This time, I got down and took a closer look. On top of the pile was a frenzy of movement, but the ants near the bottom were nearly motionless. 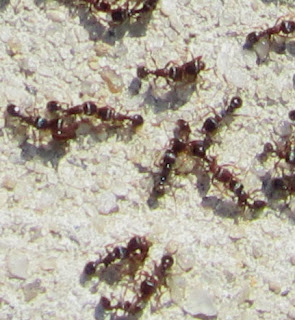 Many of them were paired off, in some sort of mandible to mandible gridlock. The tiny ants all looked like the same kind, but there were also a few dead bodies being dragged off the field of mysterious endeavor. It was either war or some wild and crazy cultural tradition.

Below is a video that may help get a sense of the multilayered dimension.

(Note: As noted in the video and the comment, these are pavement ants, introduced from Europe. The similarly small ants that show up in people's houses during the summer tend to be odorous house ants, which according to Wikipedia are native.)