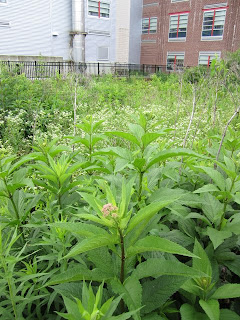 One of my favorite spots to stop on a summer evening is the ecolab wetland at Princeton High School. Most detention basins are mowed, making for curious grass pits of little use for wildlife, but this one we managed to transform into a glorious display of native plants, teaming with frogs, crayfish and birds.

The basin was designed to receive water from the highschool's roofs and a parking lot or two, but the unusual plant diversity is sustained by the high school's sump pump. "Old Faithful", I call it, because it pumps water from the basement year round, every fifteen minutes or so. 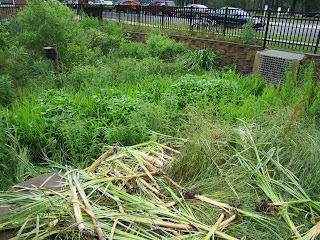 The biggest threat to the wetland, other than loss of that wonderfully consistent water source, may come as a surprise. The weeded out plant debris in the foreground of the photo is cattail, which is the native plant people most commonly associate with wetlands. Yet, it is so aggressive that, if we were to allow it to grow here, it would soon dominate to the exclusion of 20 or 30 other native species.

Liking cattails, we allow them to grow in one corner, 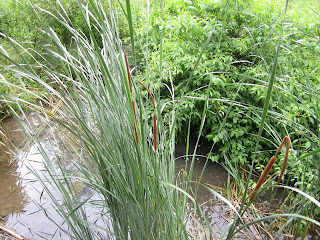 and also planted a less aggressive species of cattail--narrow-leaved cattail, which is also native but rarely encountered in the wild.

Stop by sometime when you're on Walnut Street, on the back side of the school. It can be fun to watch the goldfinches and sparrows bomb around, ducking into the cover of a willow, eating seeds, feeding their fledglings and singing their proud songs atop last year's dried stalks of hibiscus.
Posted by Steve Hiltner at Friday, June 17, 2011