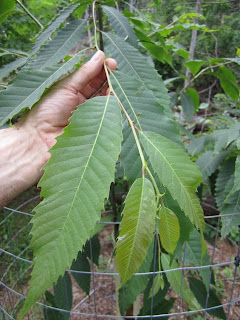 It's been a long time since healthy leaves of an American chestnut were last seen in Princeton. True, there are a few remnant specimens of the species still sprouting from ancient roots, and these new ones are actually 1/16 asian, to confer resistance to the blight that devastated the American chestnut more than 100 years ago, but they're about as native as we're likely to get with the blight still around. 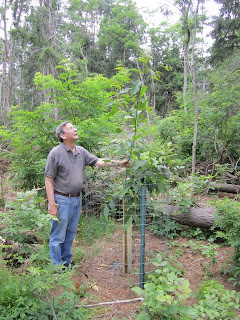 Nut tree expert Bill Sachs obtained the seedlings last year from an associate in Connecticut, planted them, and served as one man bucket brigade during the two month long drought last summer. His reward: the trees are flourishing this year, with one at Mountain Lakes having grown three feet this spring.
Posted by Steve Hiltner at Friday, June 17, 2011