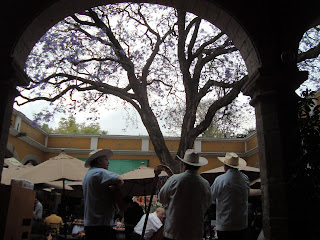 Sometimes a tree fills an architectural space perfectly, as with this Jacaranda tree in a courtyard near an open market in the San Angel neighborhood of Mexico City. In the same family as our catalpa trees (Bignoniaceae), it dotted city vistas with lavender during last week's visit.

I first encountered Jacarandas (the "J" sounds like "h", and each "a" sounds like ahhh) in Buenos Aires, where their dark branches twist and turn high above, silhouetted against the highly dissected foliage. There's an aphid that lives on the trees, excreting honeydew that can feel like very light raindrops to pedestrians below. I never noticed this sort of precipitation, but it could make for an interesting effect for any diner in this plaza who strays beyond the cover of the umbrellas.

(A previous post entitled "Atrium Honeydew Sleuth" documents a similar phenomenon in the Princeton Professional Park on Ewing Street, which features indoors many of the plants growing outdoors in Mexico City. The honeydew there doesn't fall on the walkway, and in fact offers reassurance that the office management isn't using toxic sprays to control bugs.) 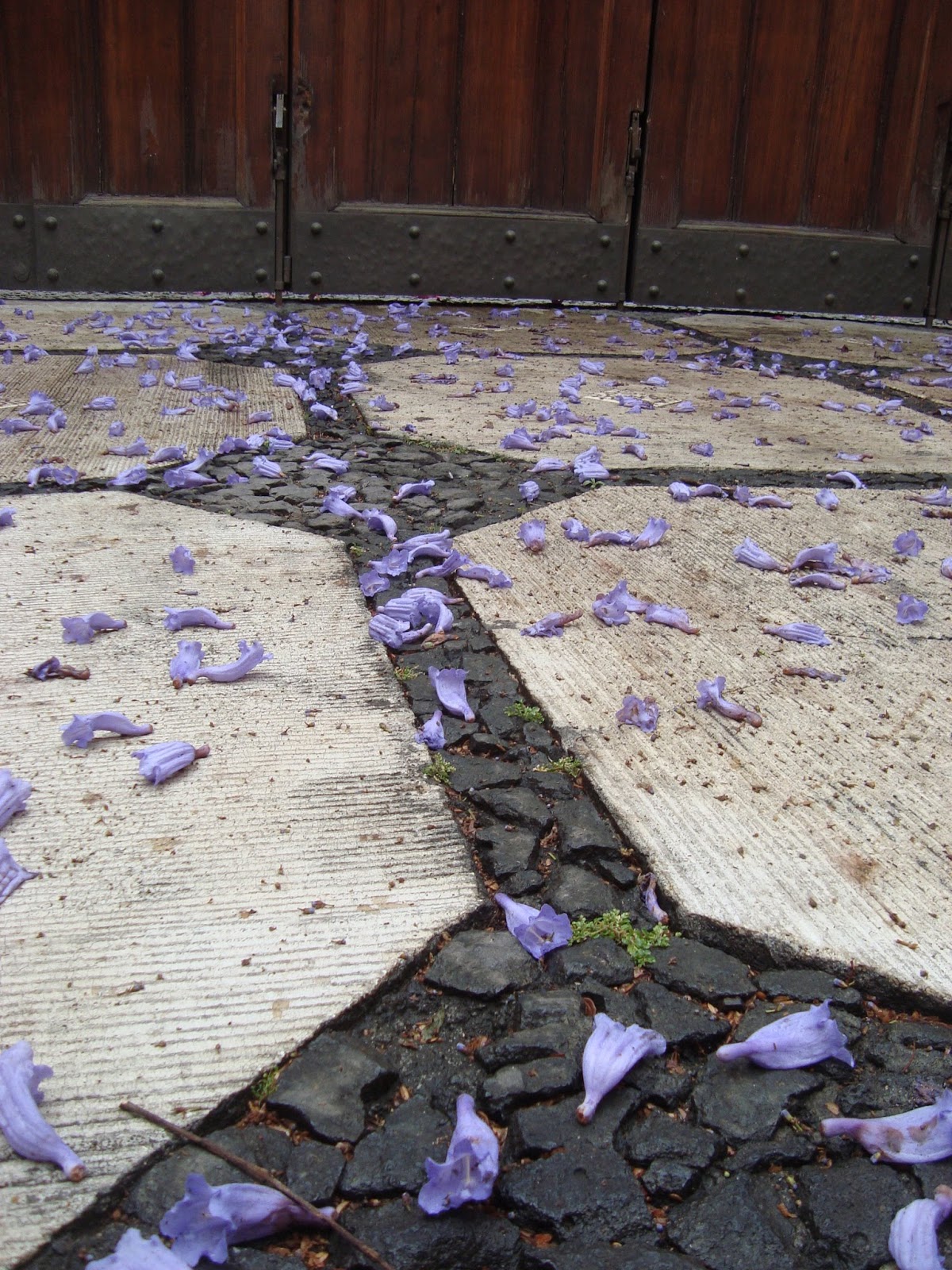 In the Coyoacan area of Mexico City, the Jacaranda flowers greeted us in the courtyard of the bed and breakfast. 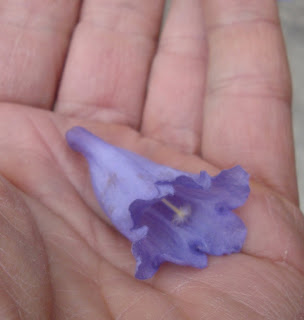 Our catalpas have a white version of this flower. Native to Central and South America, Jacarandas have been planted elsewhere in the world, including Florida and the southwest. 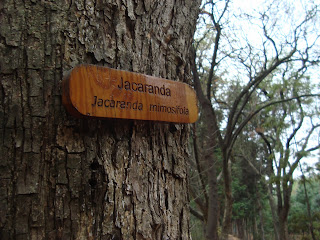 In the Viveros of Coyoacan--a large tree nursery that also serves as a jogging mecca much like New York's Central Park--one of the trails is named after the tree, though I didn't find the glorious corridor of color I had imagined. 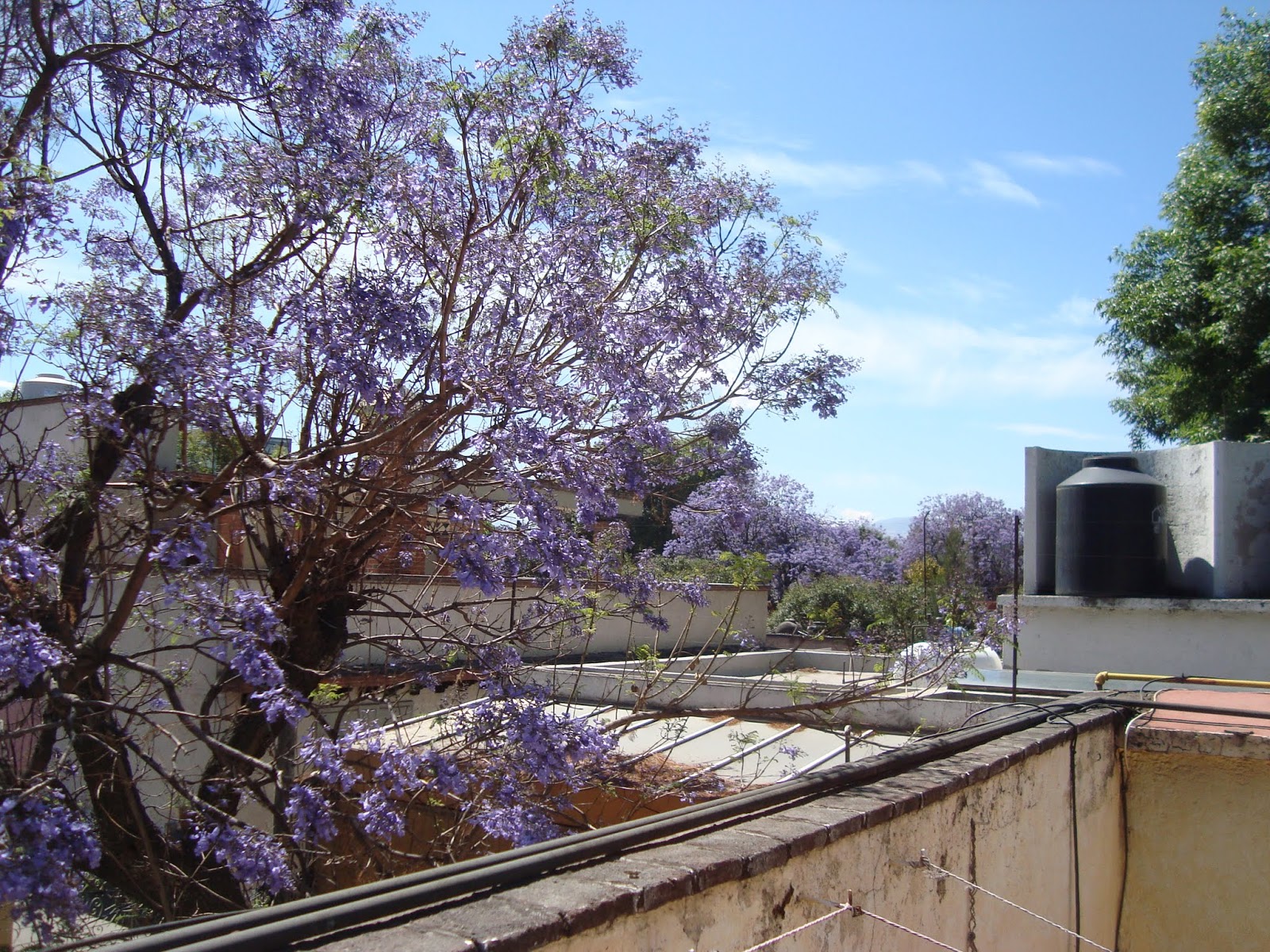 Sometimes you have to go up on a rooftop, in the more utilitarian company of water heaters, clotheslines and water storage tanks, to see Jacarandas much better.