A Walk Around Rogers Refuge 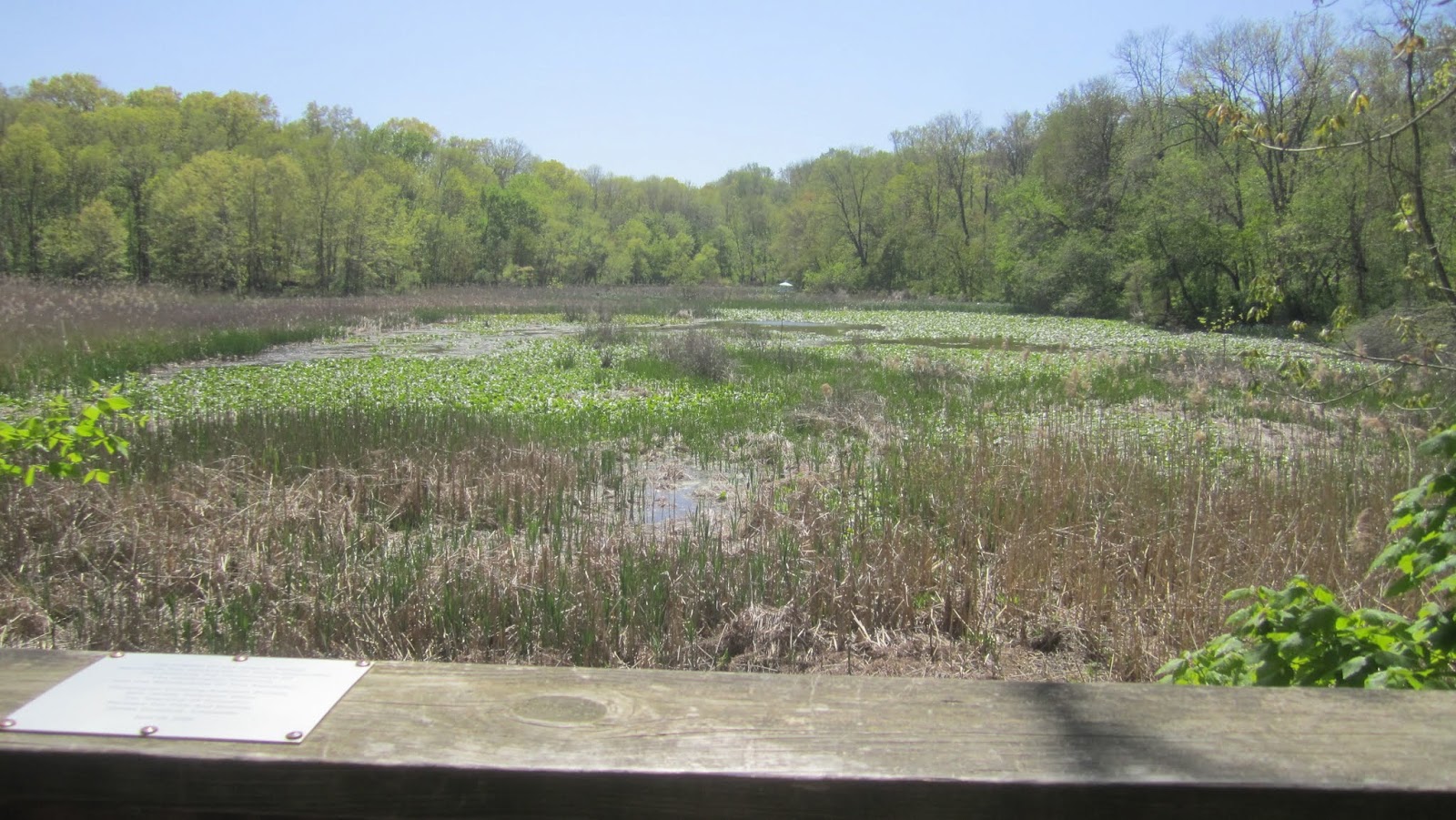 Note: Washington Crossing Audubon will be leading two bird walks here and in the adjoining Institute Woods this weekend, each starting at 8am. Follow the link for more info.

As part of a "water in the landscape" course I taught at the Princeton Adult School, I led a walk around Princeton's premier wetland, tucked away at the end of a gravel road behind the Institute, at Rogers Refuge. The wetland is fed by periodic runoff from the Institute Woods, along with steady input from water pumped from the Stony Brook during the growing season. I think of it not as artificial but as "enhanced".

Here's an update from Fred Spar, president of the Friends of Rogers Refuge, on the latest bird sightings: "we’ve had plenty of Wood Ducks on the water, some Mallards, Canada Geese and, briefly, a pair of Green-Winged Teal. And along the edges we’ve had a Bittern, a Sora, some Snipe, a Great Egret, lots of GBHs, and at least one Solitary Sandpiper. This weekend we also had a Little Blue Heron." 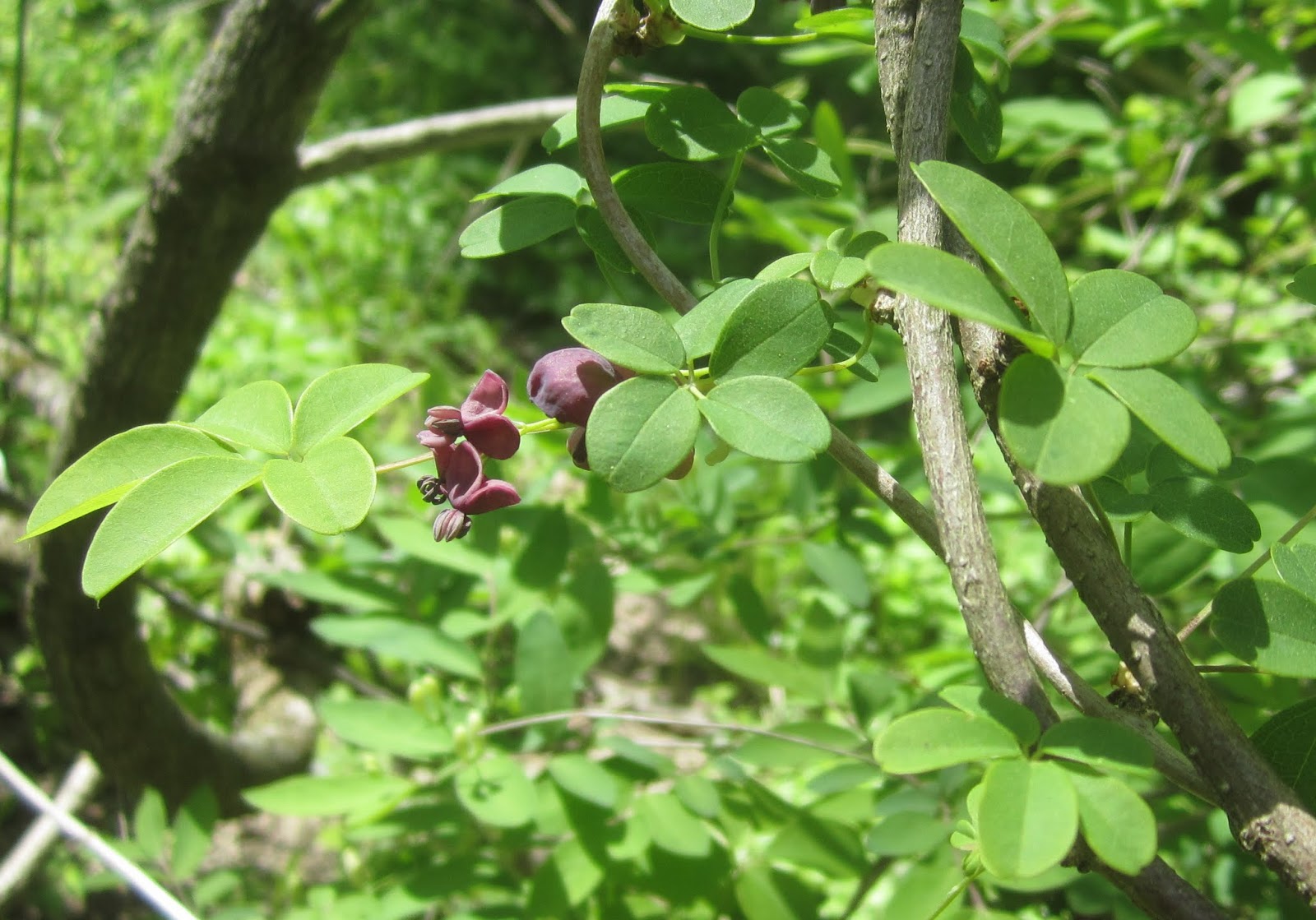 Paying more attention to plants than birds, my first sighting upon arriving there was a bit dismaying. Fiveleaf Akebia (chocolate vine, Akebia quinata), which I had noticed crawling on a bush a few years back, 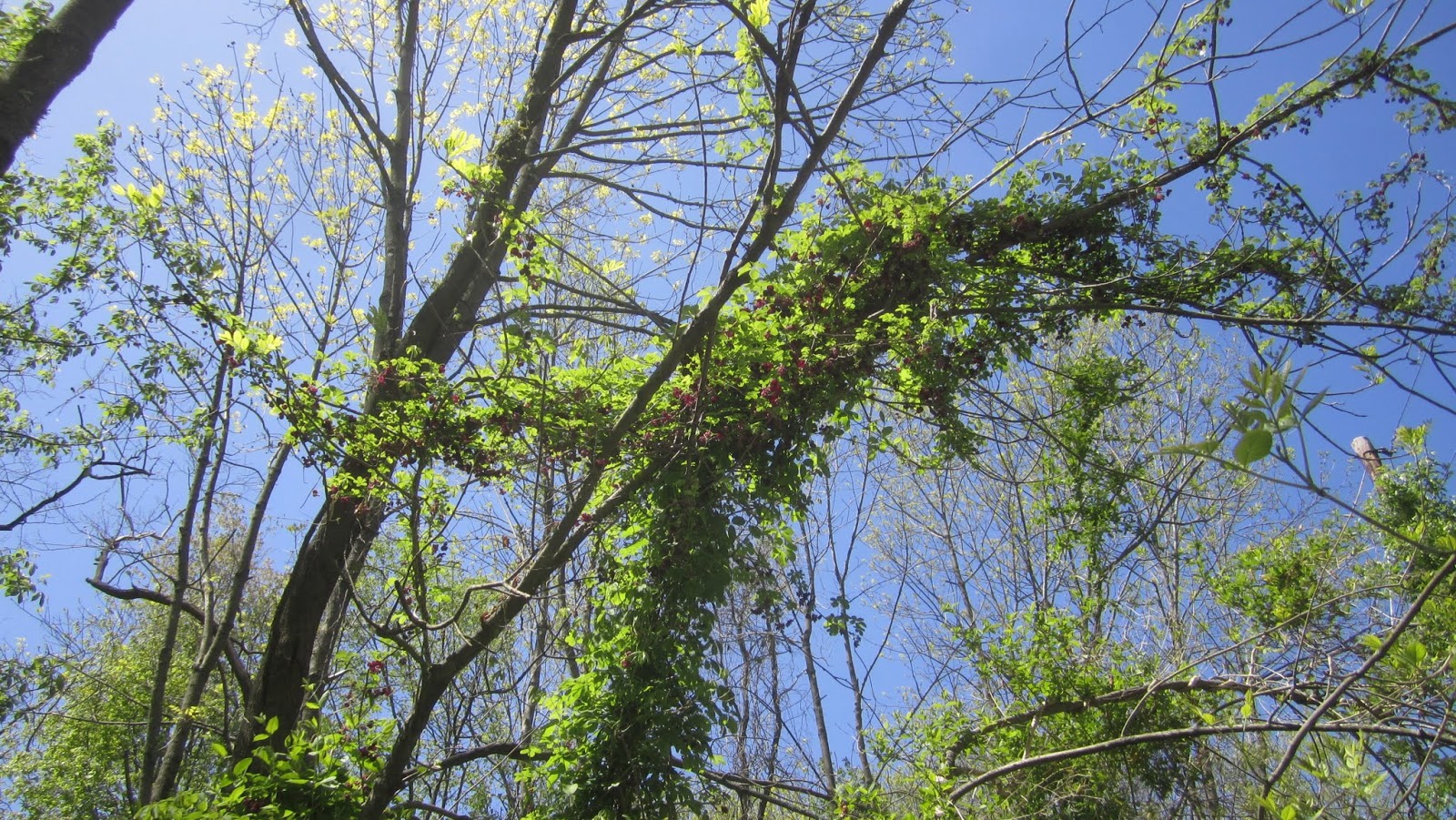 is now taking to the trees next to the parking lot. It's an exotic ornamental vine that is proving invasive in some locations. 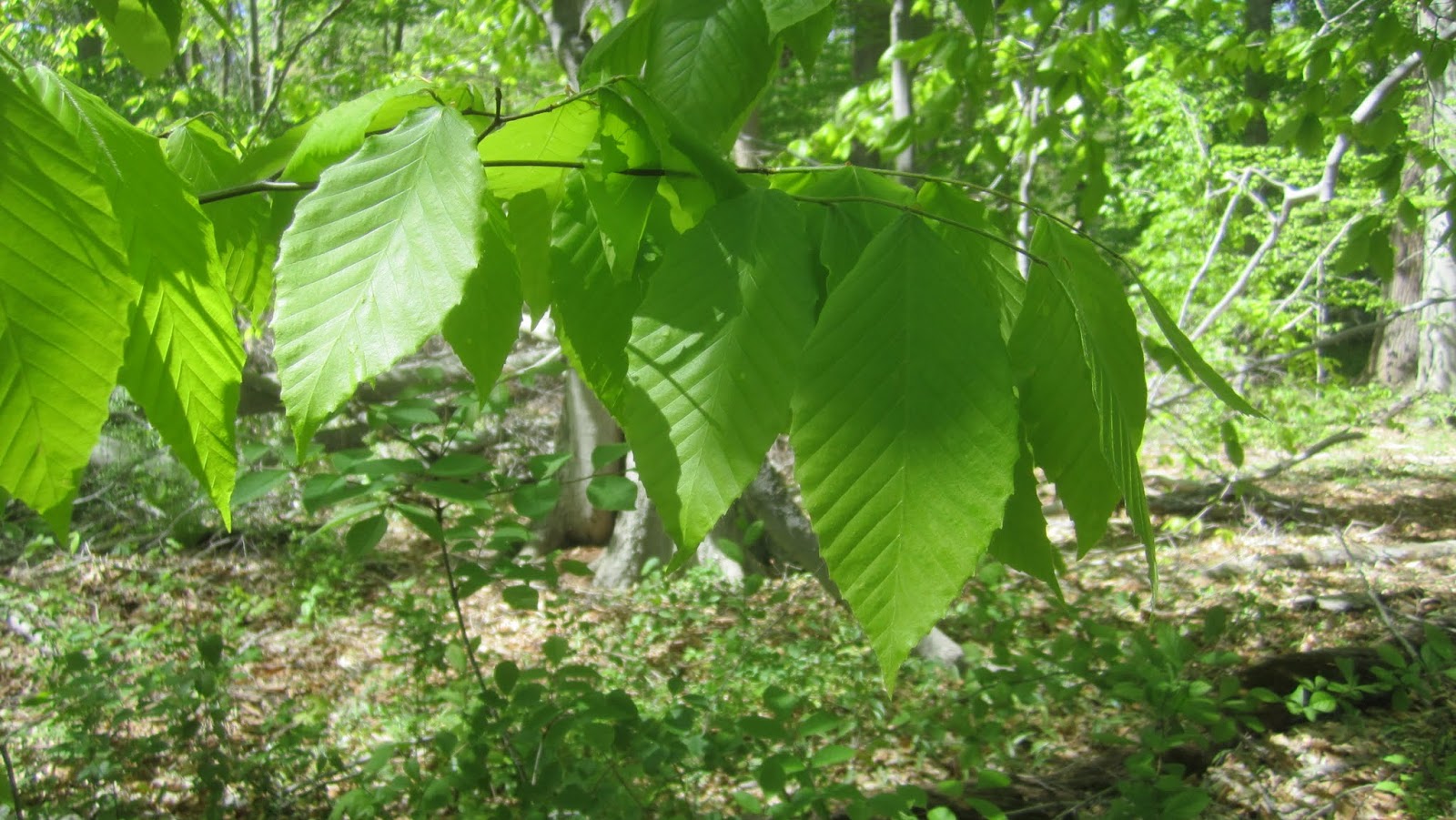 Heading around the marsh to the right, we encountered the fresh new leaves of beech trees in a mature grove 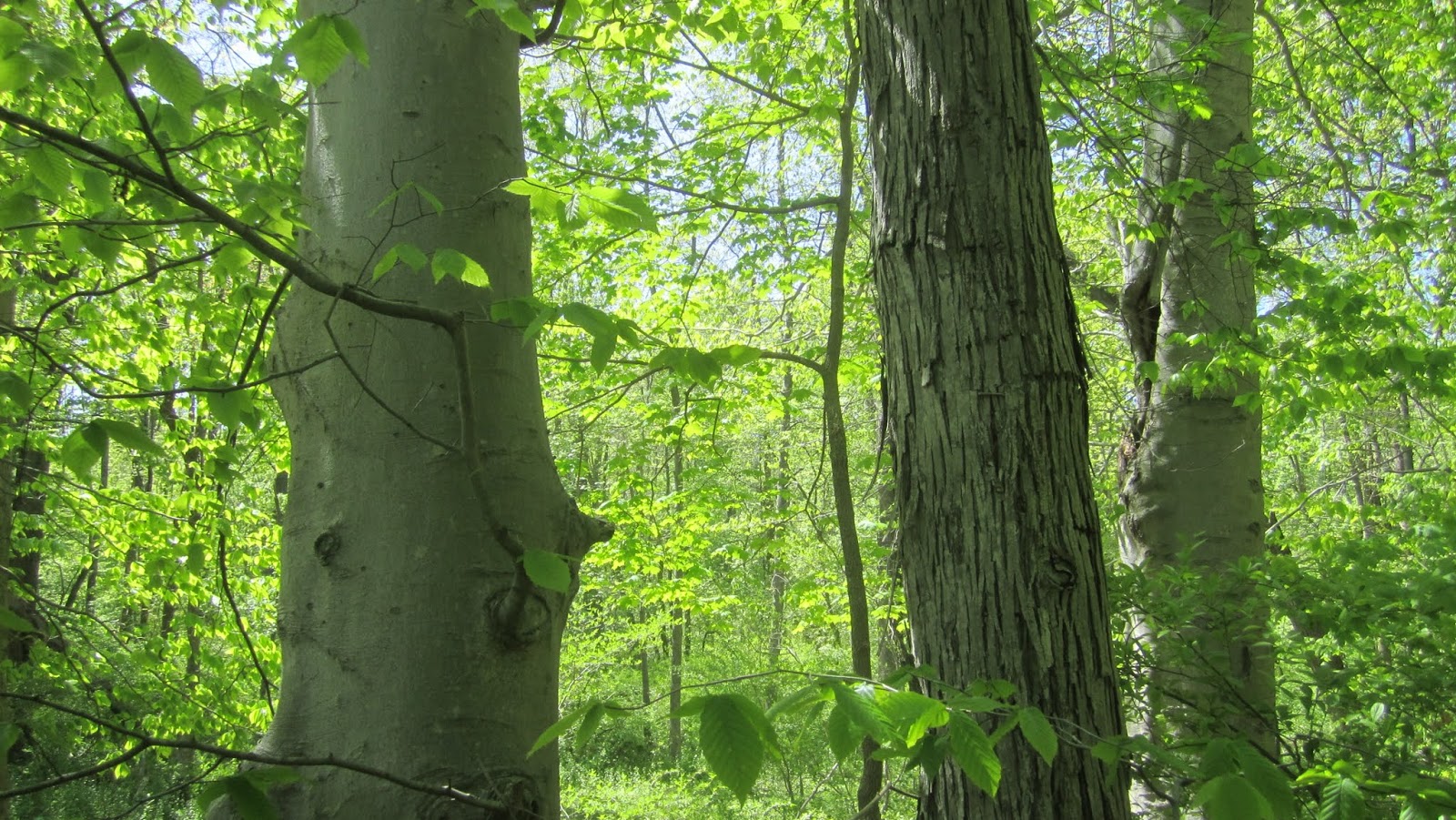 that included a shagbark hickory (with beech trees to left and right in this photo). 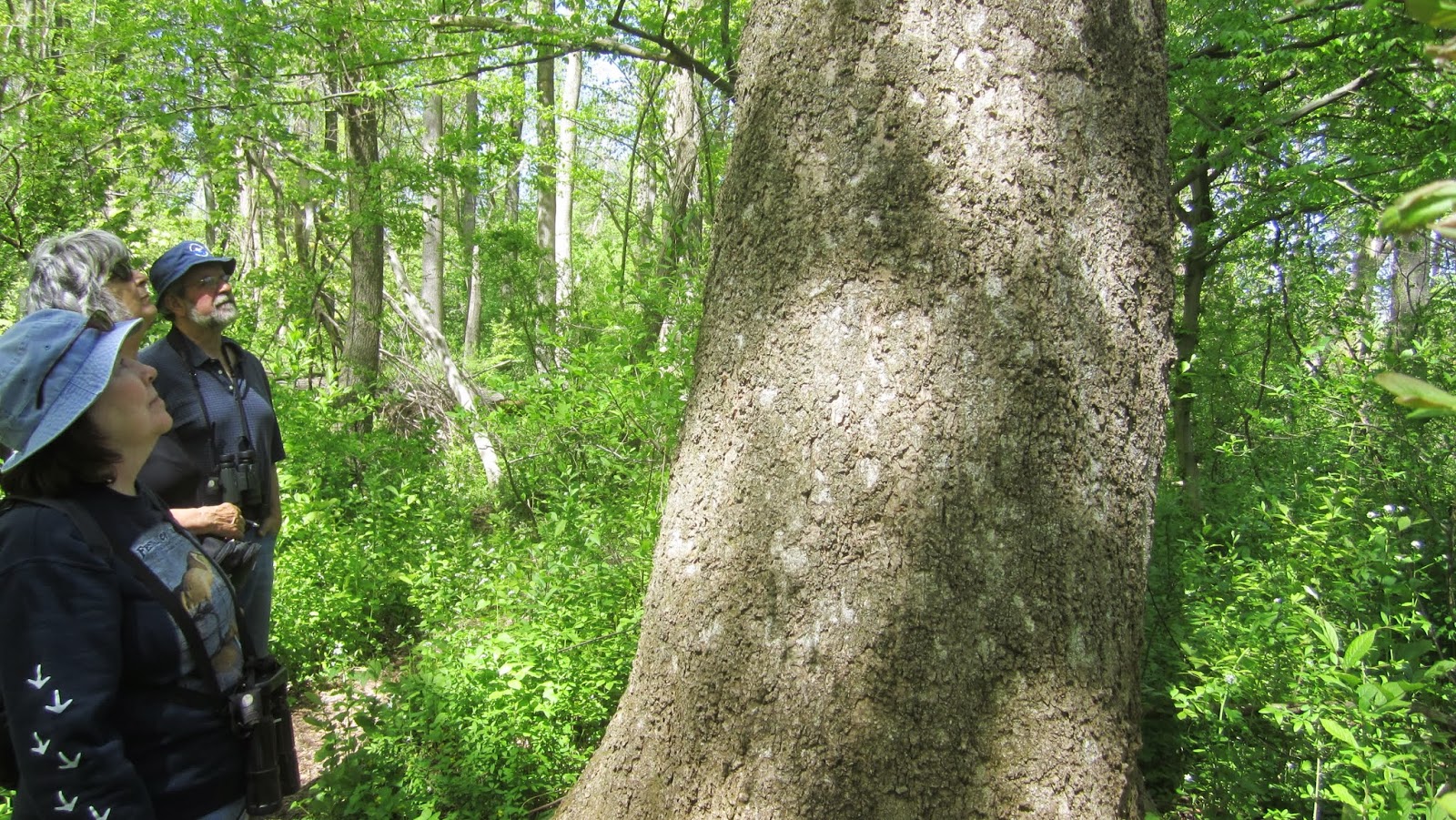 Some trees are so big in the Refuge/Institute Woods that their lower bark takes on a completely different pattern from the standard bark further up. 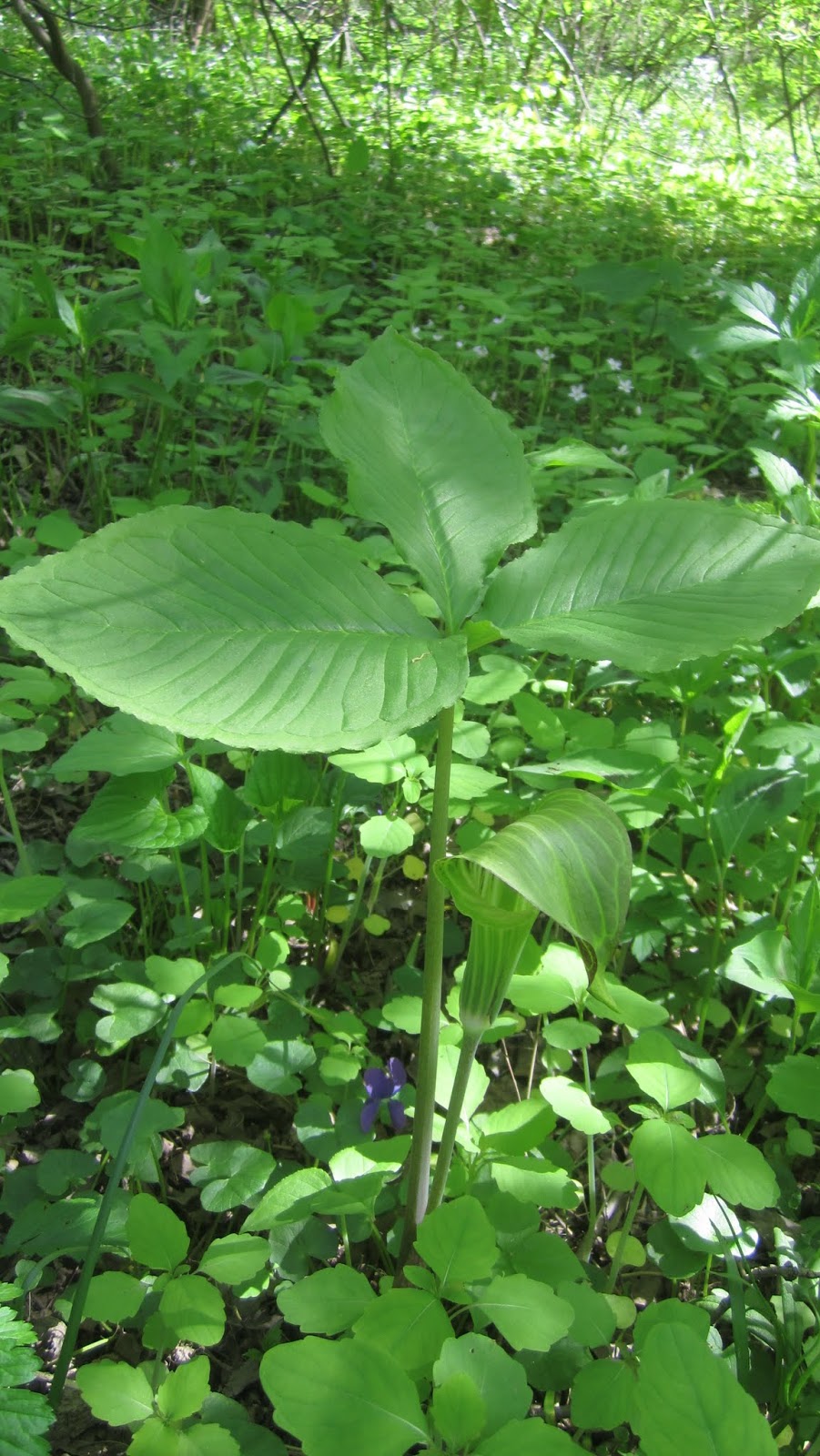 Further on, a Jack in the Pulpit rising above a bed of jewelweeds and violets. 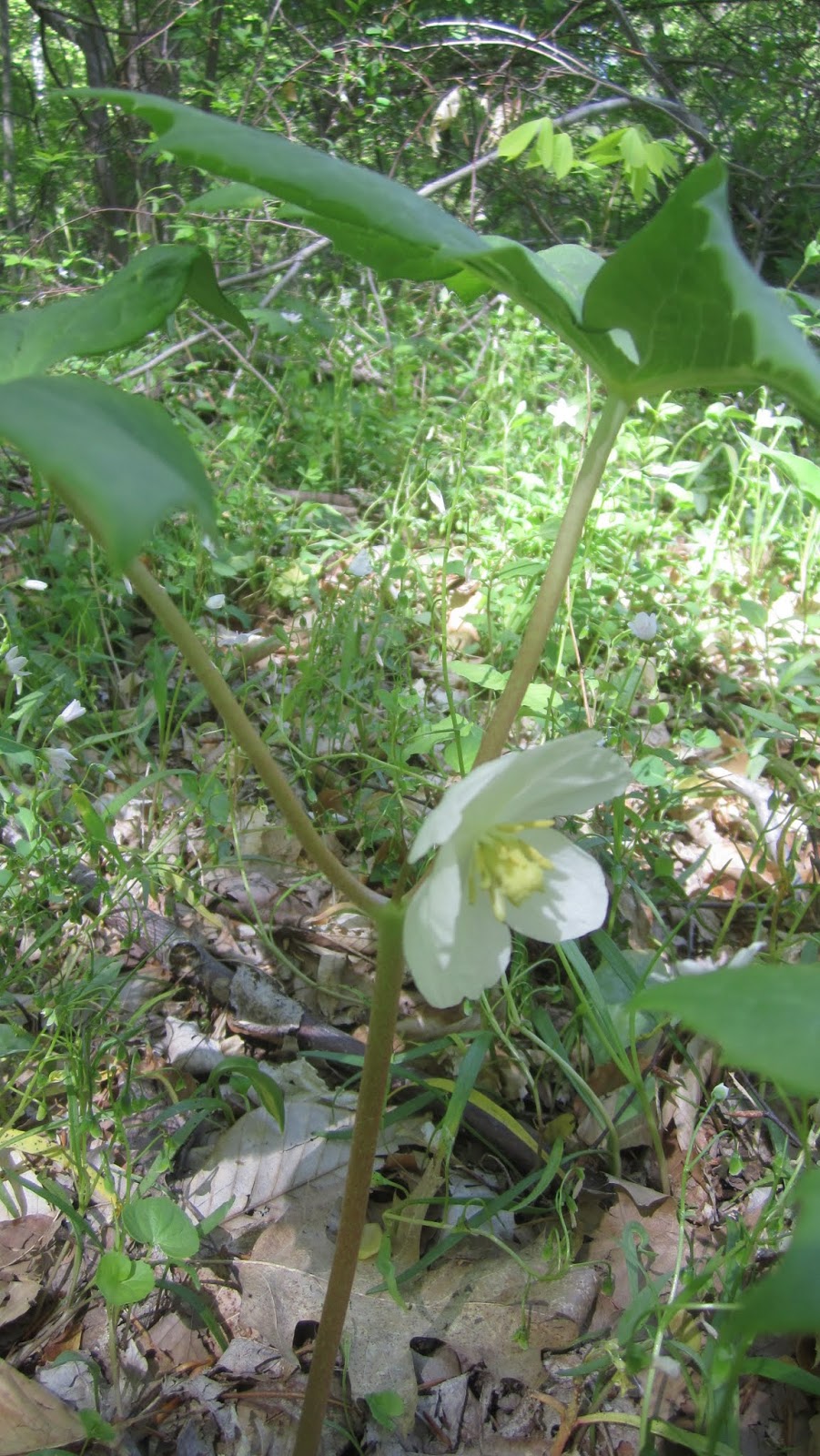 A Mayapple with its shy flower shielded by the leaf. 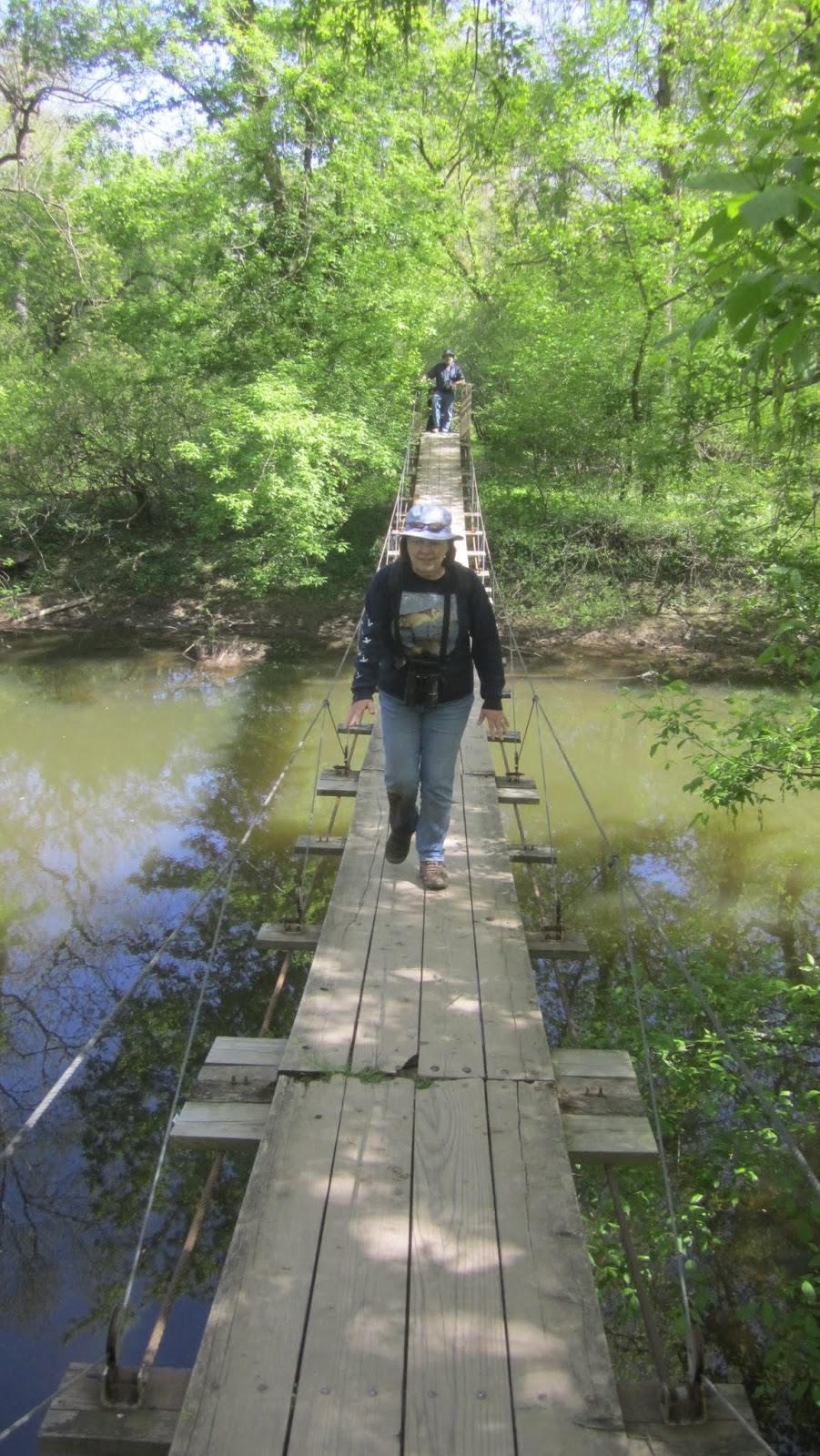 One thing I had forgotten to mention in the course description is that he final exam involves crossing a bridge suspended over the StonyBrook. Everyone passed with flying colors. 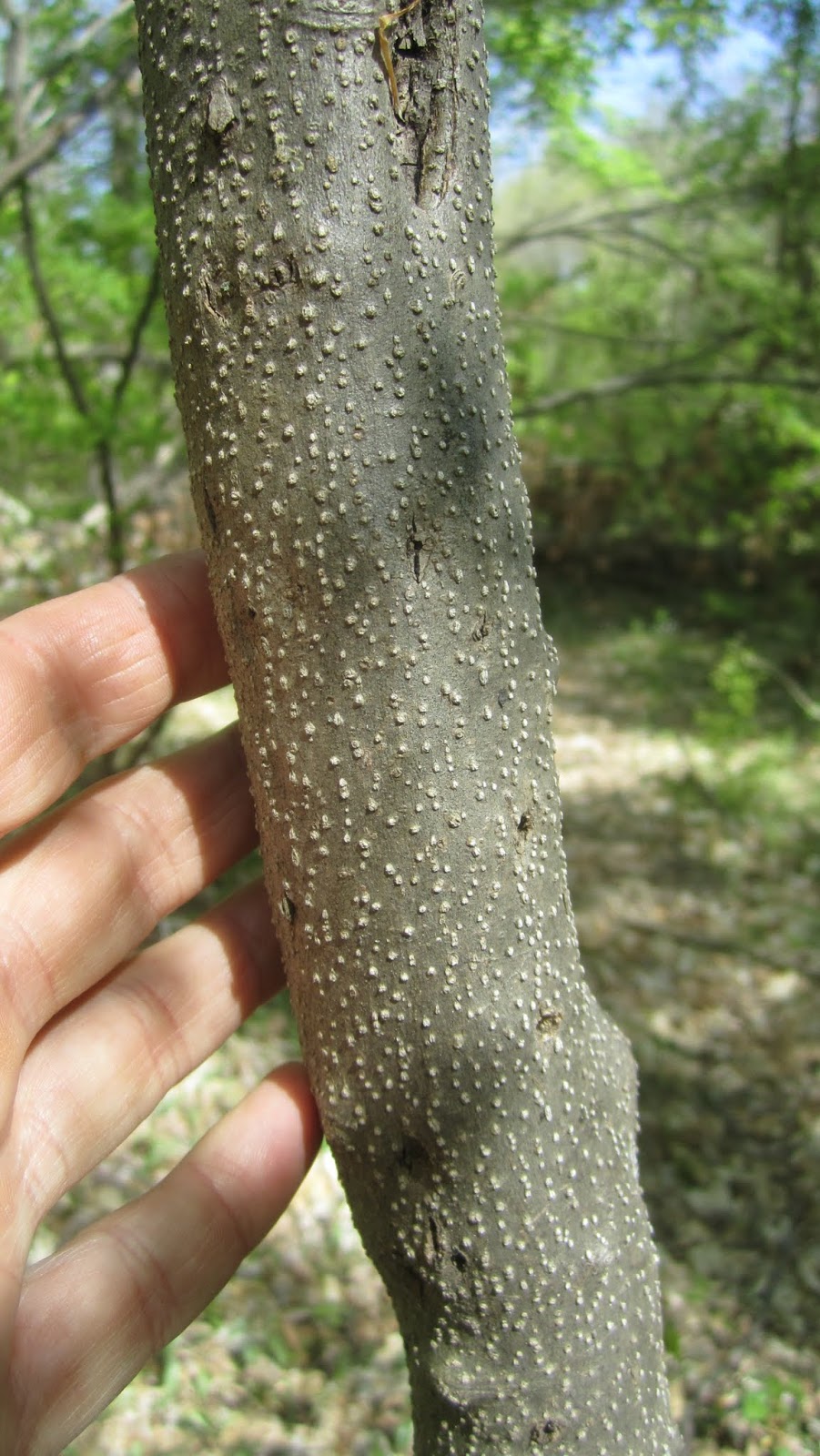 The speckled bark of spicebush (Lindera benzoin) is a common sight now that the deer population is more in balance. 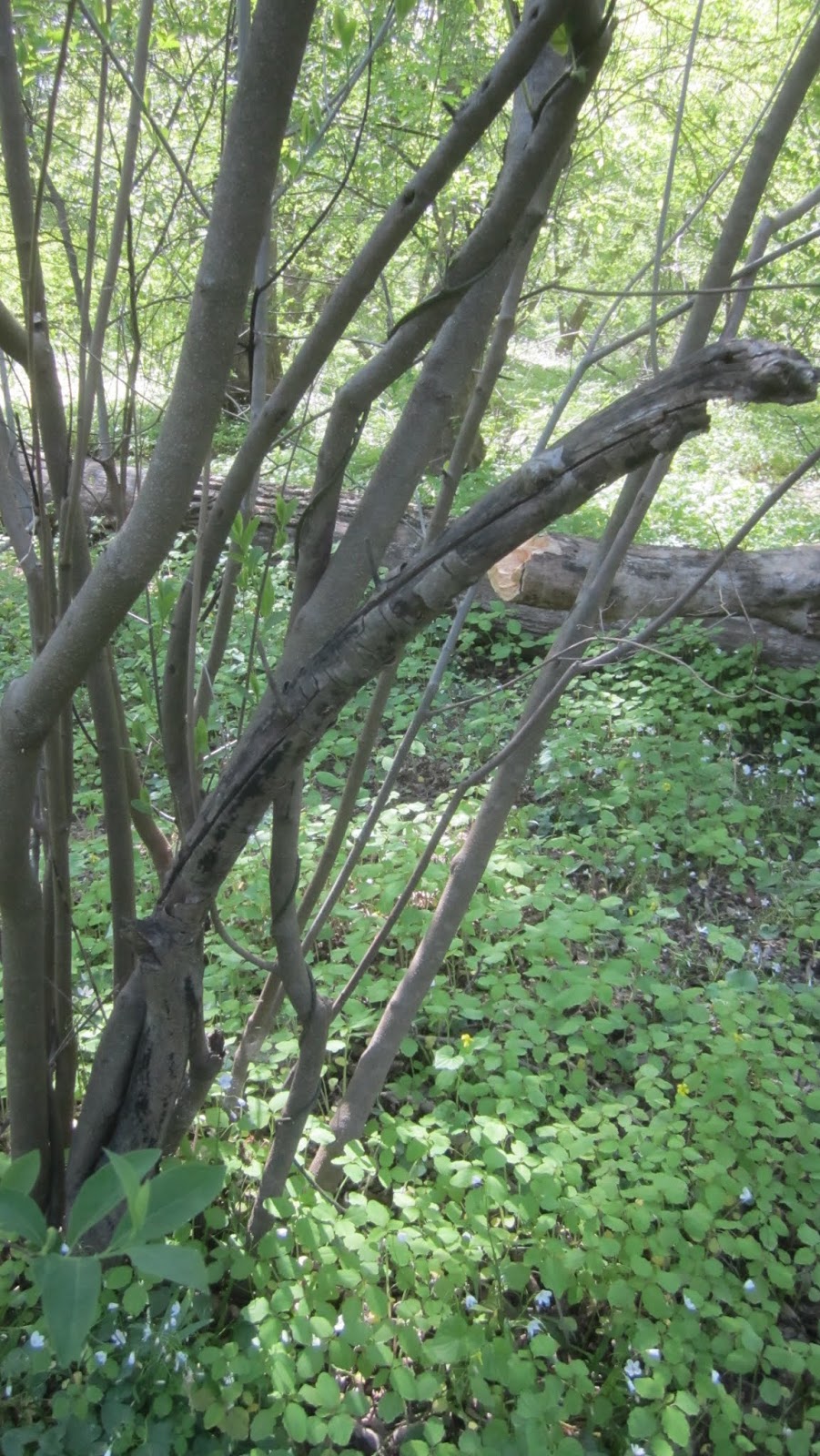 This cluster of spicebush trunks did not exist ten years ago, when browsing pressure from deer was so intense that spicebushes had only one stem. All new shoots from the base would be eaten by the deer. The shrub survived only by having one stem too high for the deer to browse. You can see that one stem in this photo, now dead, due to the shrub having invested its energy in all the new shoots that finally got a chance to grow to mature height. Having a healthy shrub layer in the woods has greatly increased nesting by birds. 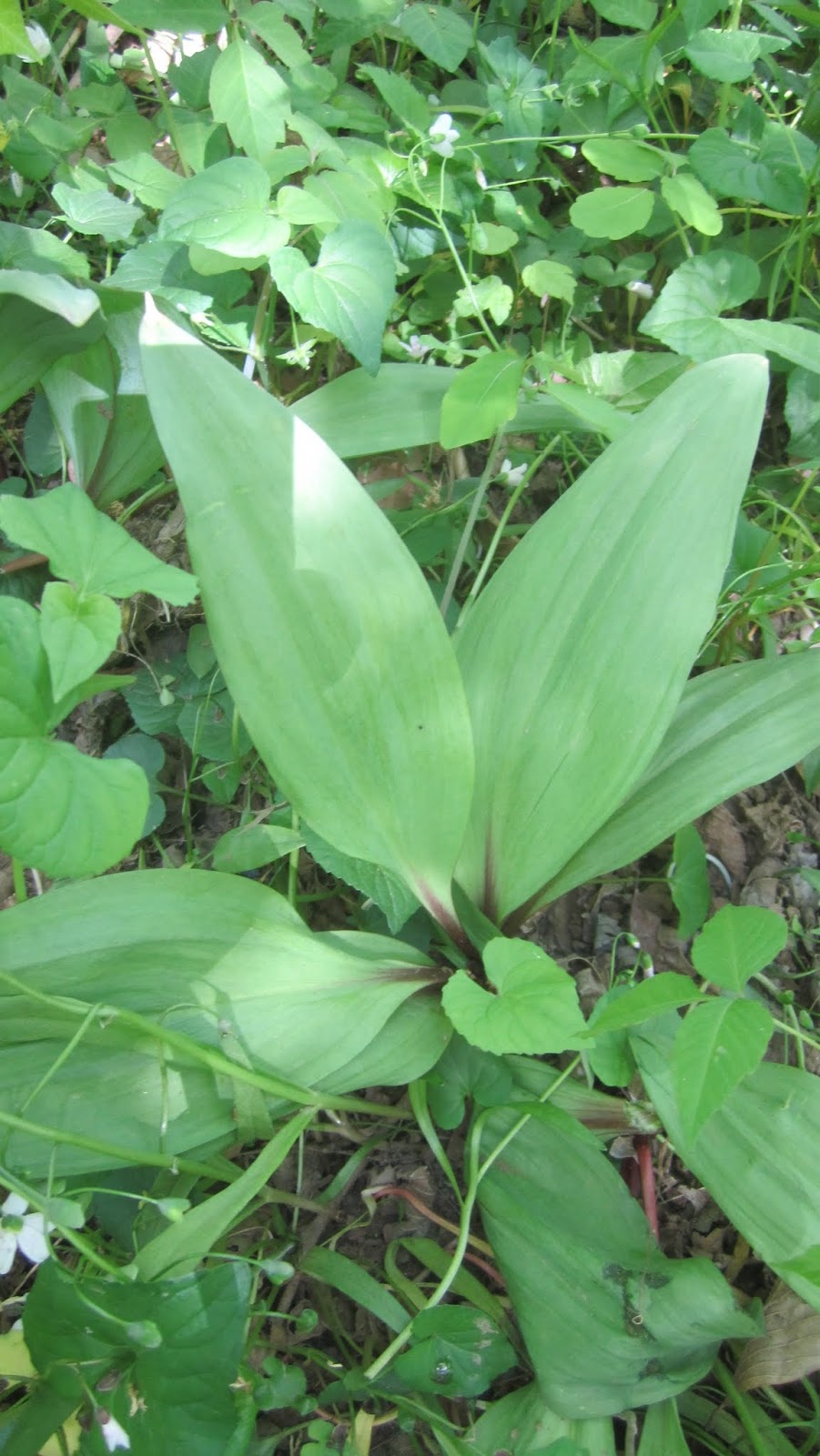 Wild leek (Allium tricoccum) grows in some of the higher quality areas of the woodland. (Please, no harvesting.) 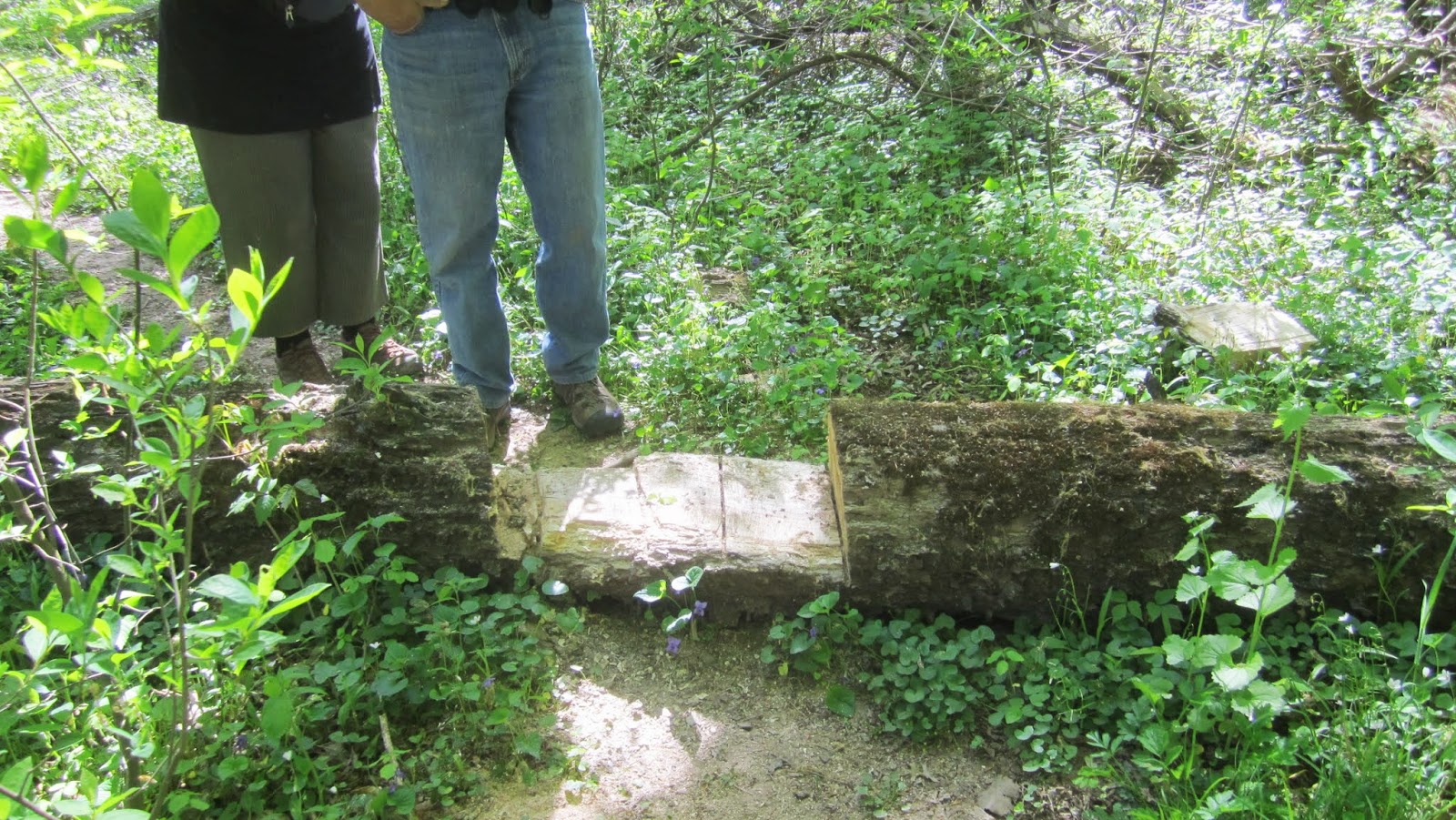 We encountered evidence of the work of Clark Lennon and Eric Tazelaar, Friends of Princeton Open Space board members who have been keeping the trails clear. 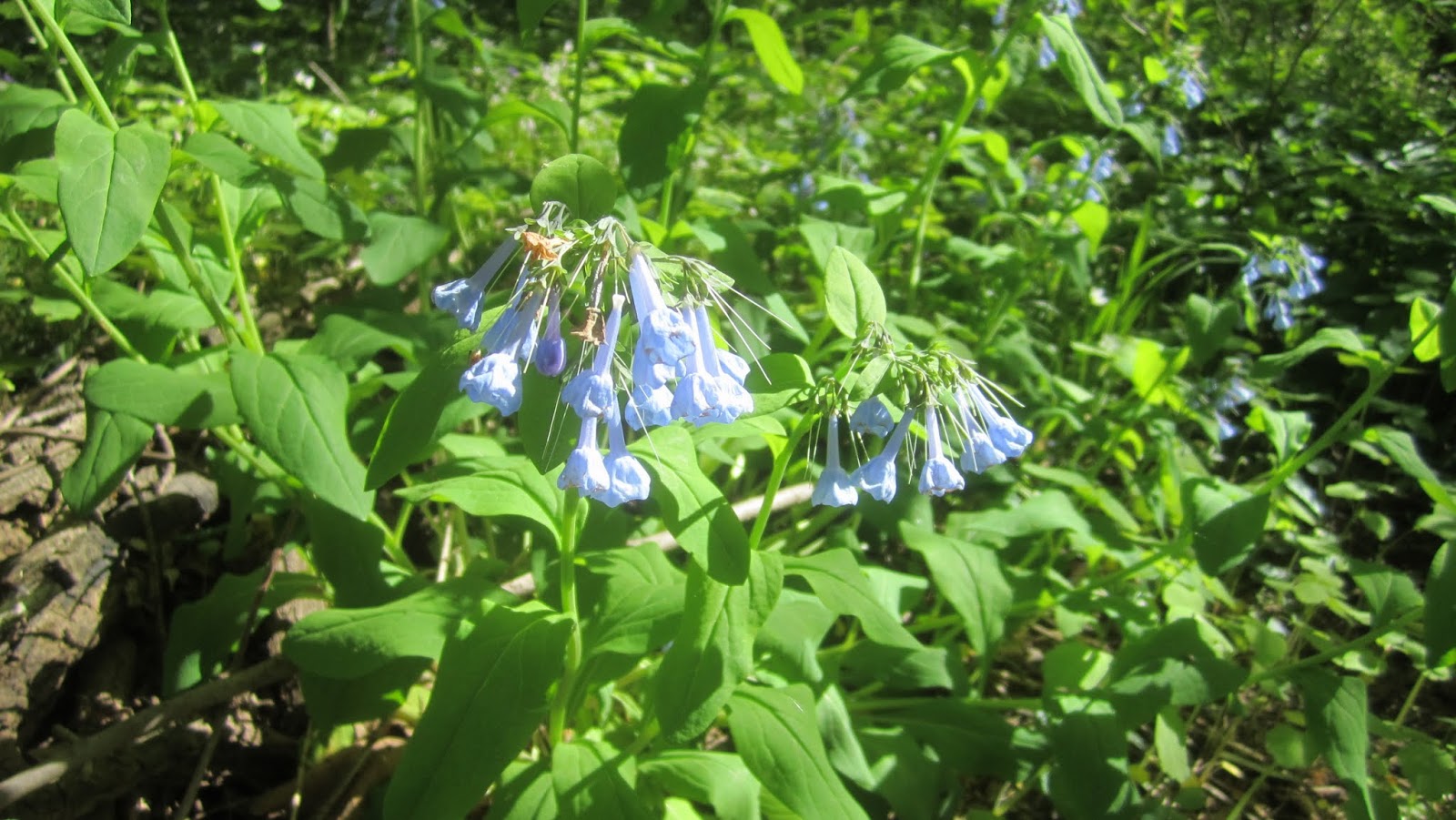 Virginia bluebells (Mertensia virginica), once surely common around Princeton, now are hard to find. This is the only one I know of. 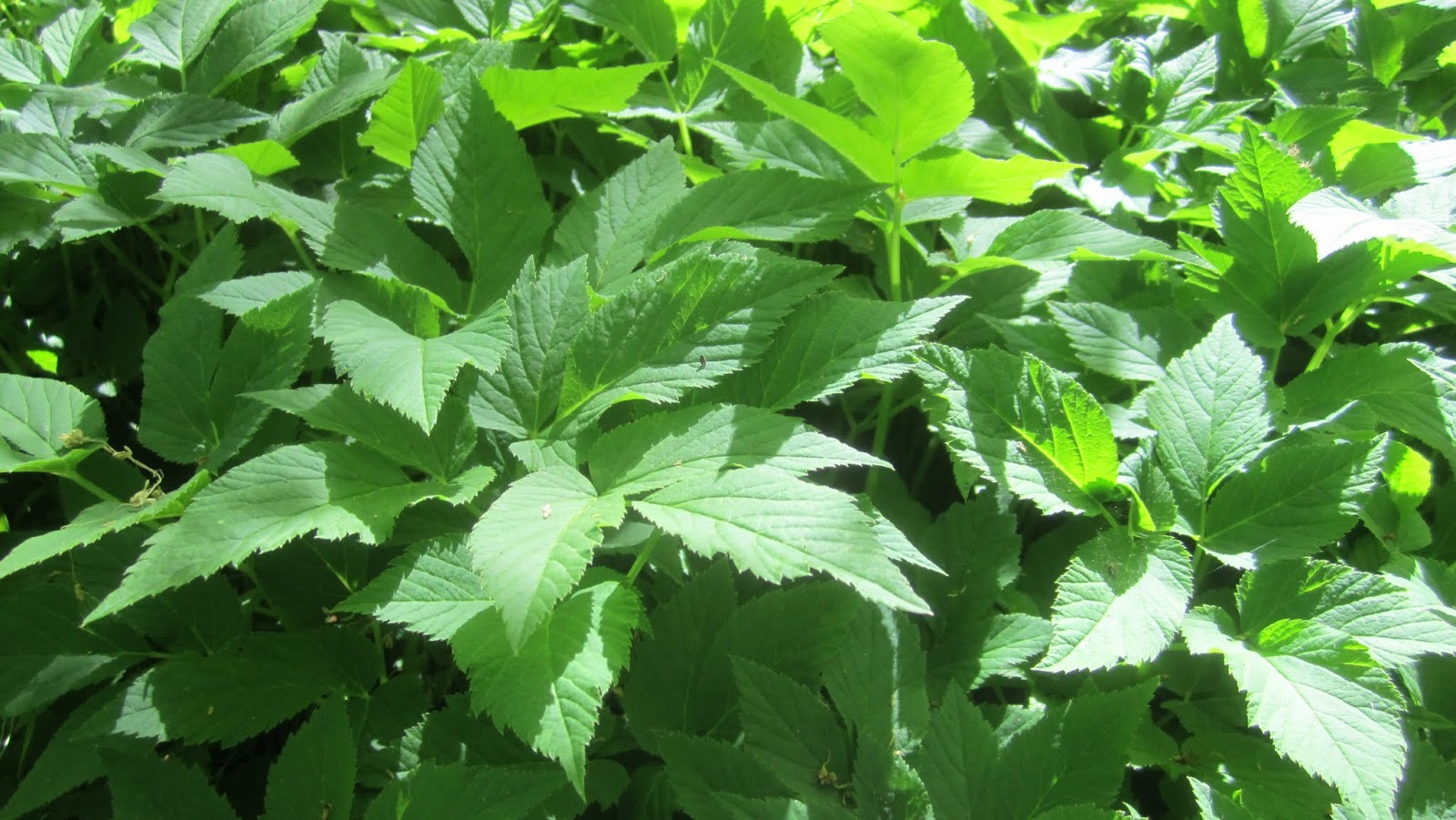 And its future, as well as its authenticity as a wild specimen, was brought into question when I noticed a patch of goutweed growing within a few feet of it. Goutweed is an aggressive spreader, introduced to the U.S. from Europe and Asia. Since it doesn't typically spread by seed, its presence suggests that the area had been planted at one time, perhaps as a garden for a dwelling long gone. 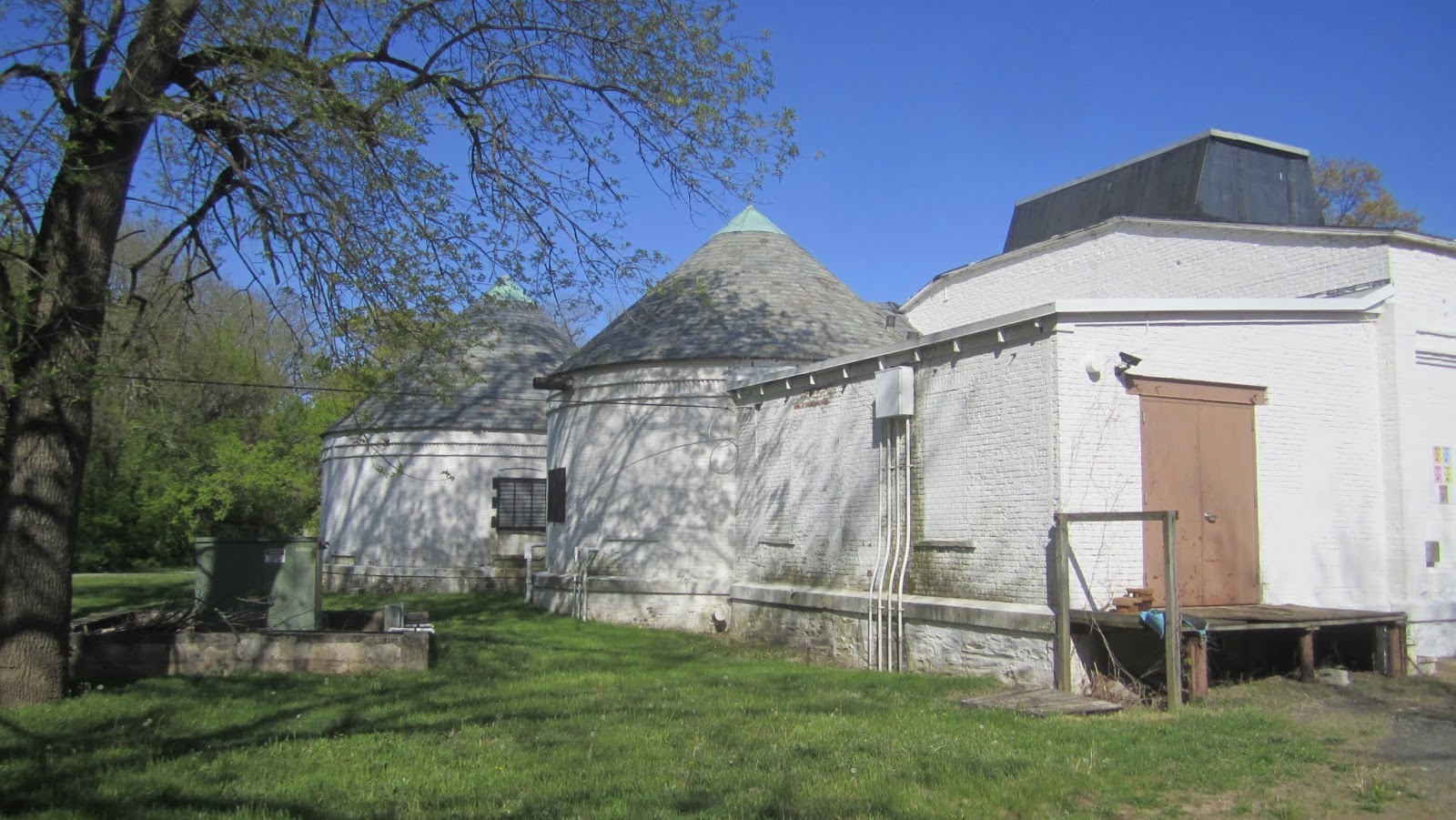 This property, though open to the public, is owned by the American Water Company, which draws some high quality water from the wells there, does some light disinfection and sends it off to add to the water supplies of Princeton and West Windsor. Well water is tastier and much less expensive to treat than the Millstone/Raritan river water that comprises most of Princeton's tapwater. The "enhanced" wetland, in fact, began as an attempt by the water company to feed the aquifer with water pumped from the river. Instead of percolating into the aquifer, the water stayed on top. The birds came, followed by the birders, who then worked with the water company to maintain the auspicious arrangement. 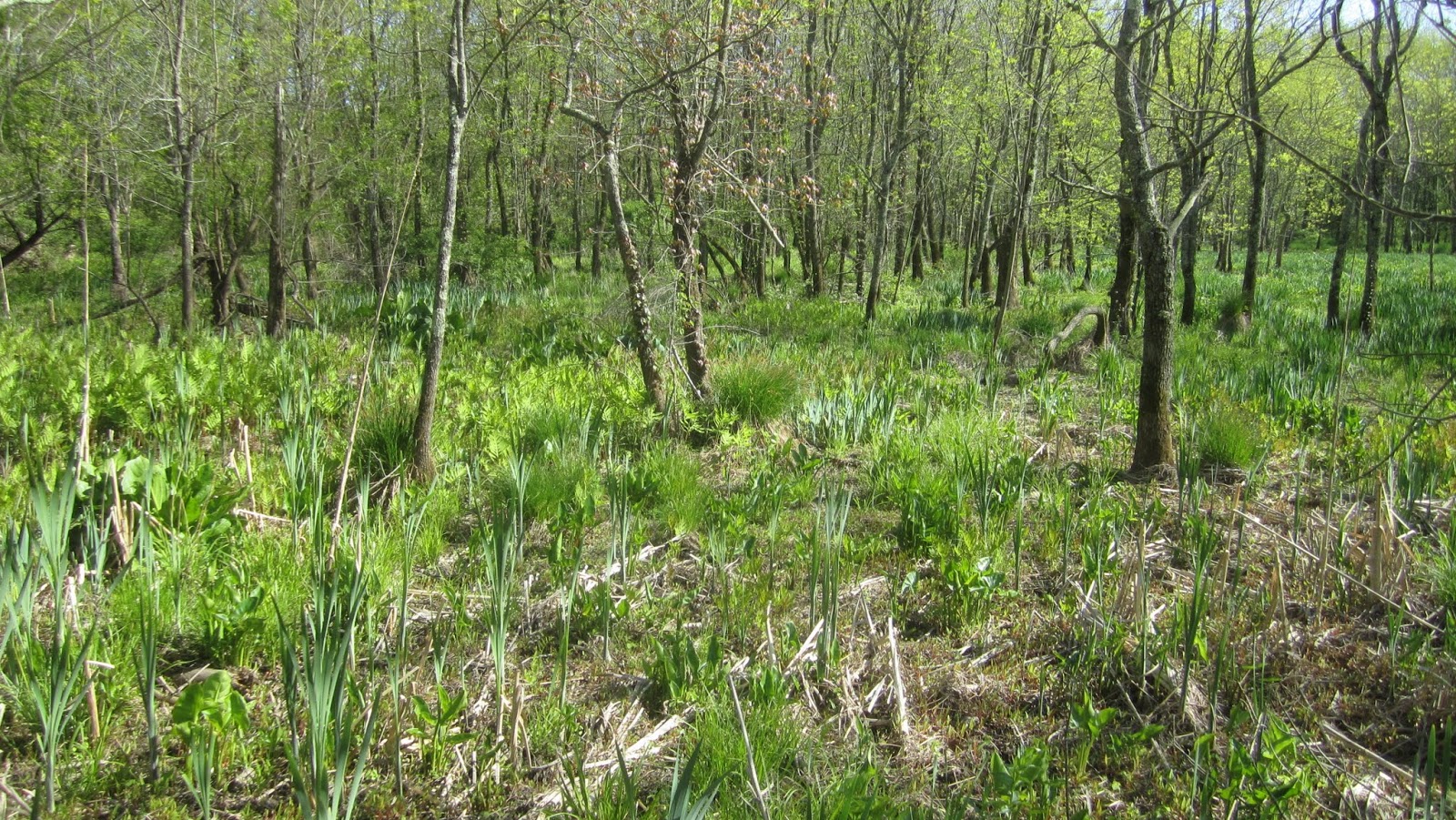 Here's one of my favorite spots--a sort of wetland savanna of stunted ash trees lightly shading a rich understory of sedges and ferns. Cattails, normally aggressive and domineering, "play well with others" here, probably due to the shady conditions. 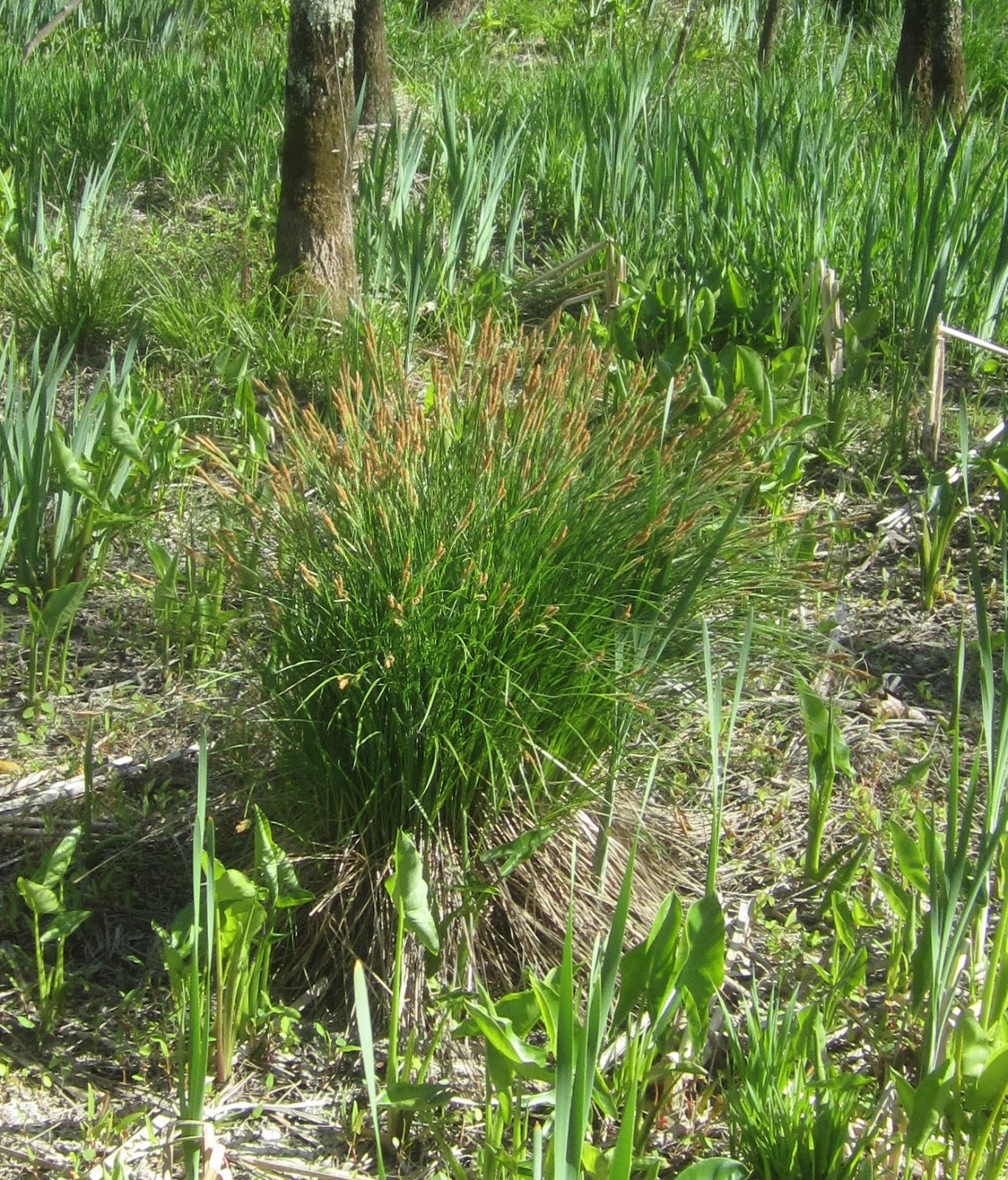 Tussock sedges make tussocks, with irises in the background. As the tussocks get higher year to year, they sometimes provide a dry enough spot for a tree to germinate and grow. 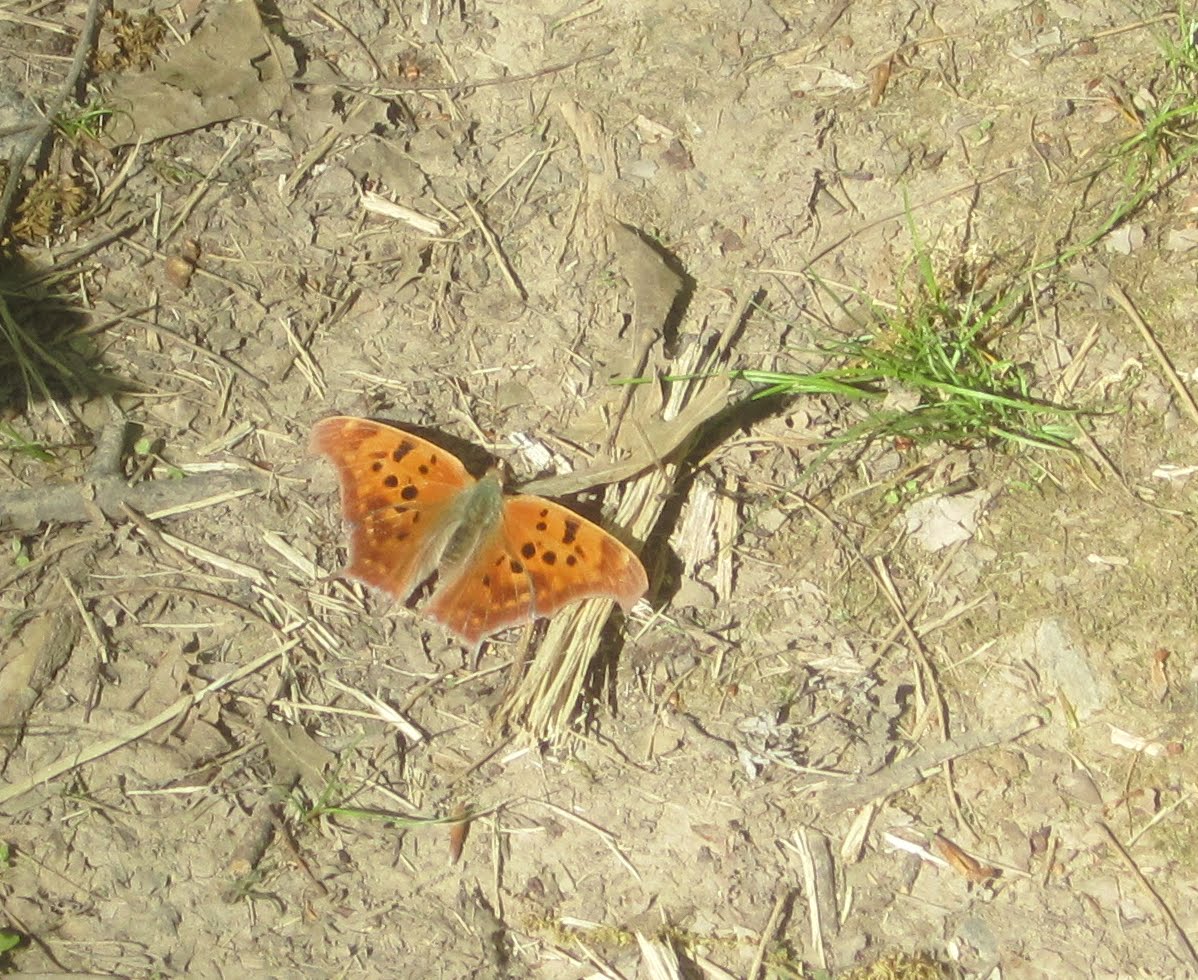 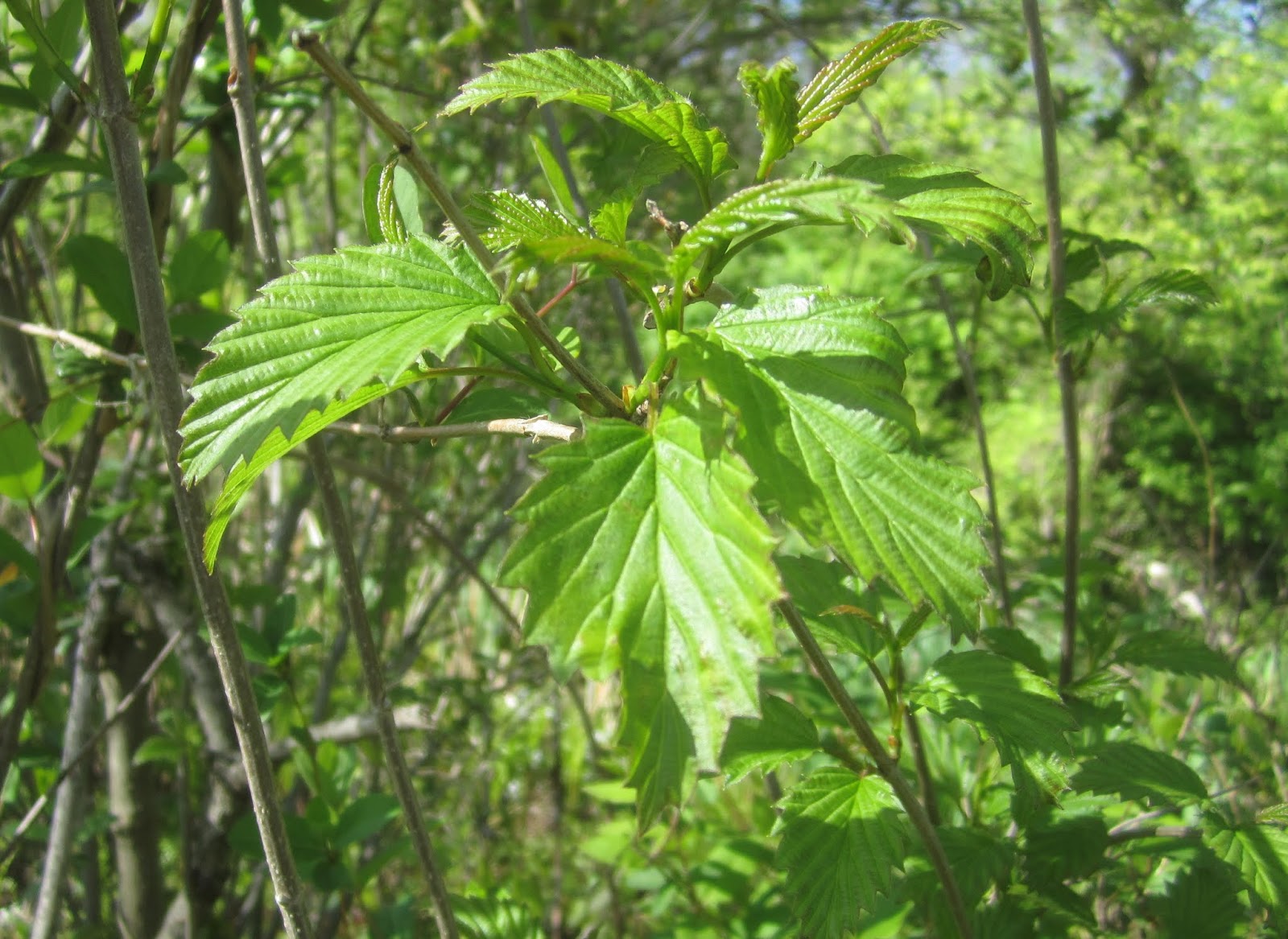 We returned to the parking lot, where the students volunteered to help me cut the chocolate vine off the trees. Rogers Refuge is a special place, and a good example of how the right kind of human intervention can make a positive difference.
Posted by Steve Hiltner at Friday, May 17, 2013