Trees and History at the Institute for Advanced Study 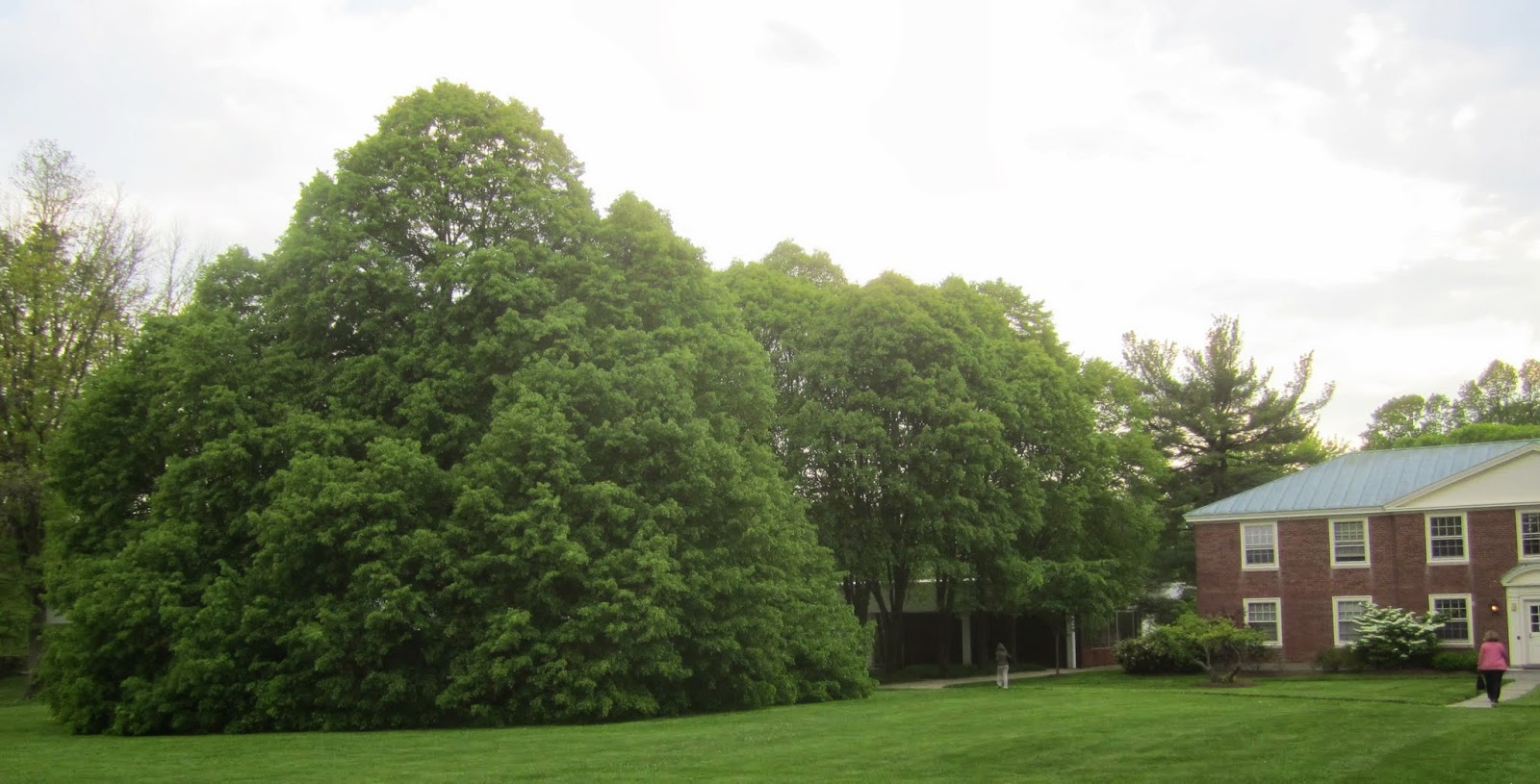 At a reception following a public talk by Ray Monk, the author of a biography of J. Robert Oppenheimer, there was considerable speculation about what kind of tree was growing across the field from Fuld Hall. This particular specimen has a growth form reminiscent of the Southern Magnolias (Magnolia grandiflora) found in the southeastern U.S., with dense foliage all the way down to the ground. 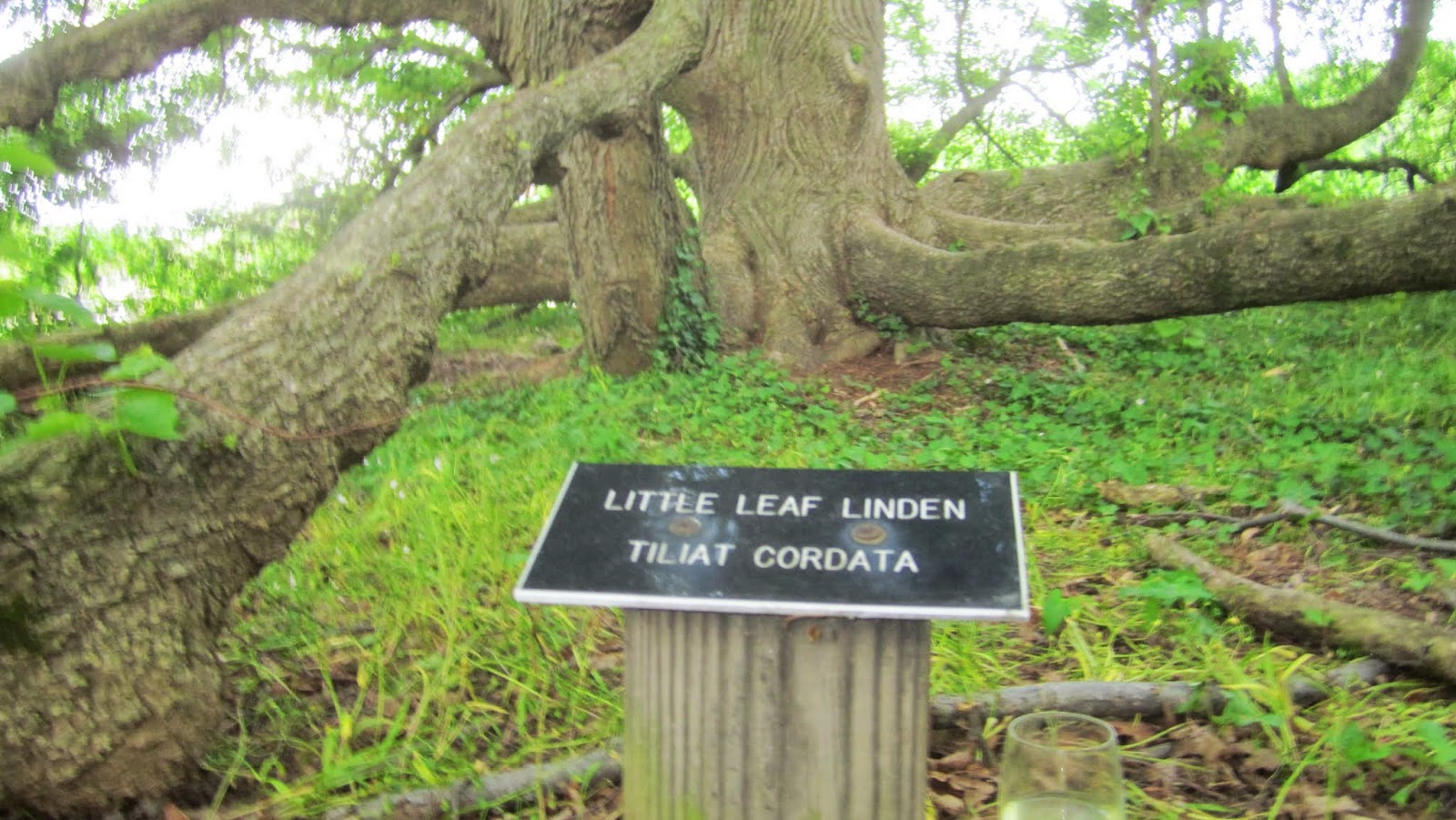 Having been out to the Institute over the winter to research mathematician and visionary Oswald Veblen in their archives (my website about his extraordinary legacy and abandoned Herrontown Woods house is at VeblenHouse.org), I happened to know there was a sign buried deep in the tree's sprawling branches. Hard to know how much to read in to this Little Leaf Linden's (Tilia cordata) presence on the grounds. Might Elizabeth Veblen, who grew up in England and began the tradition of afternoon tea at the Institute, have wanted this European species available for making Linden tea? The director's residence on Olden Lane also has several suitably noble and towering Lindens growing near the house, though with the more normal growth form with leaves far out of reach. 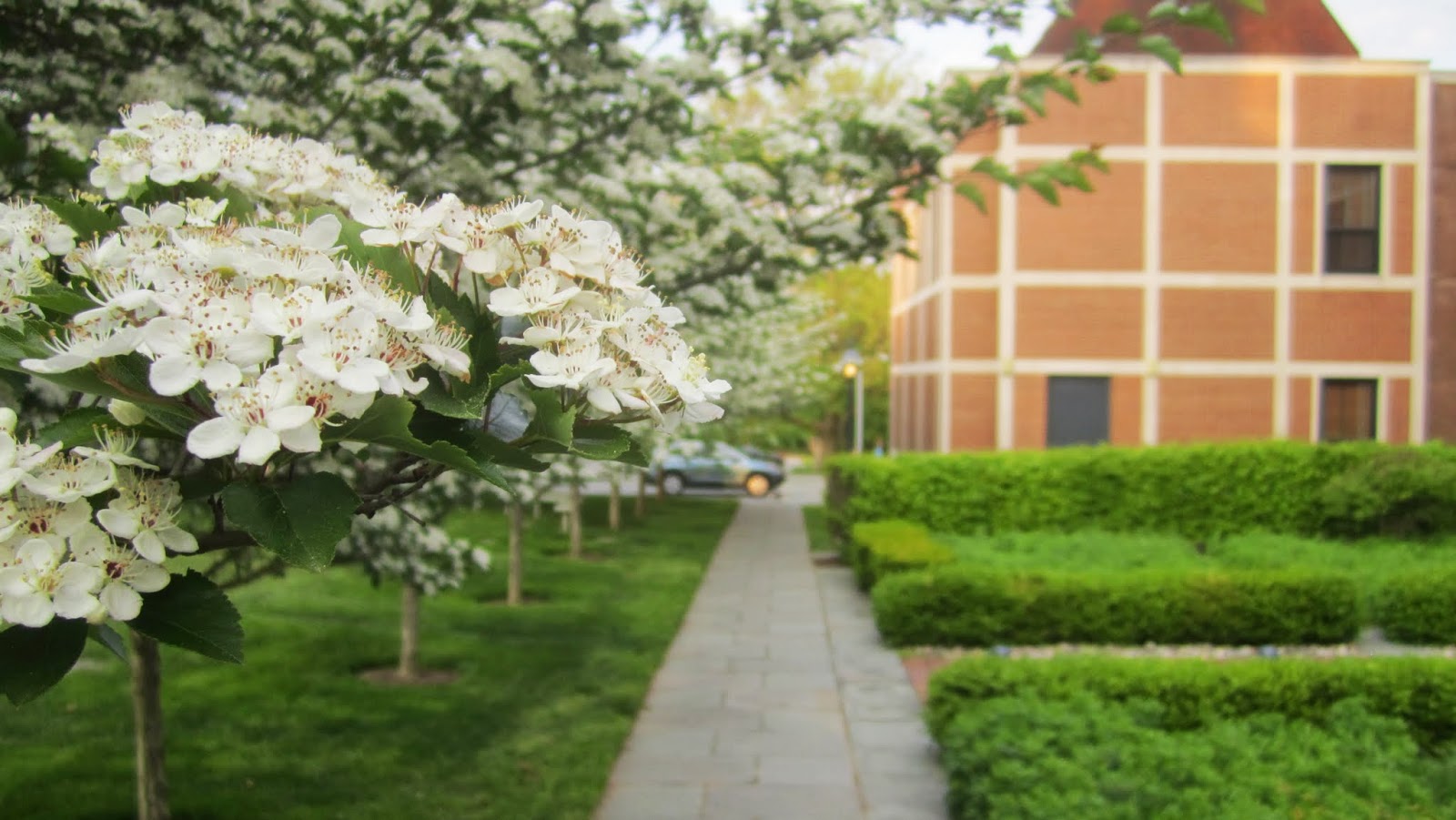 Veblen's vision for the Institute, which mingled with the visions of Abraham Flexner and the Bambergers, drew from both European academic institutions and  his experience during World War I at an American military base, where a group of mathematicians developed a special intellectual camaraderie while improving ballistics calculations.

The trees on the Institute campus reflect this mixture,  perhaps unintentionally, with many American species mixed in. Hawthorns are in full bloom, 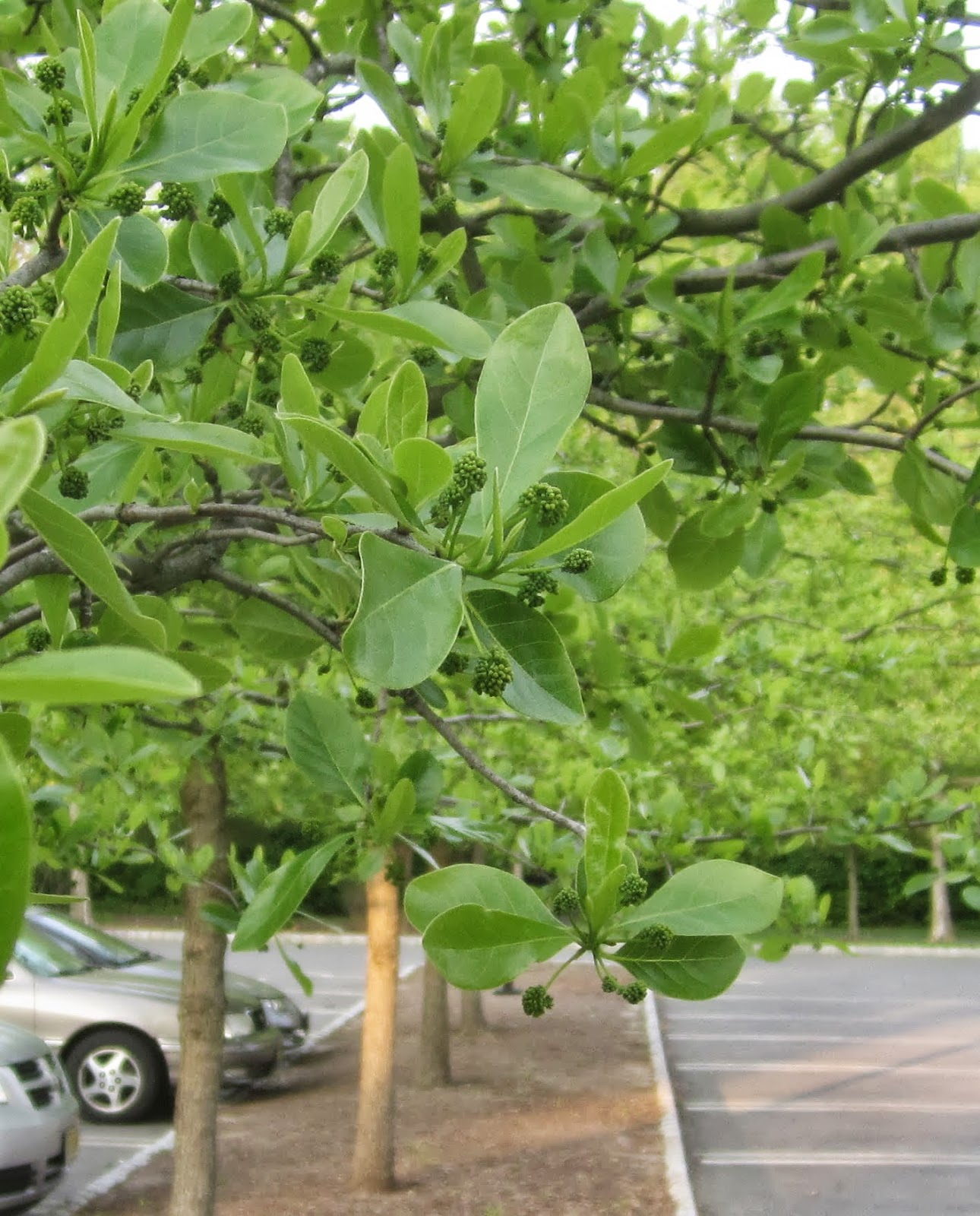 much showier than the tupelos, which are about to burst forth with their barely noticeable green flowers. Tupelos (also called black gum, Nyssa sylvatica) save their show for the autumn, when their leaves turn a blazing red. 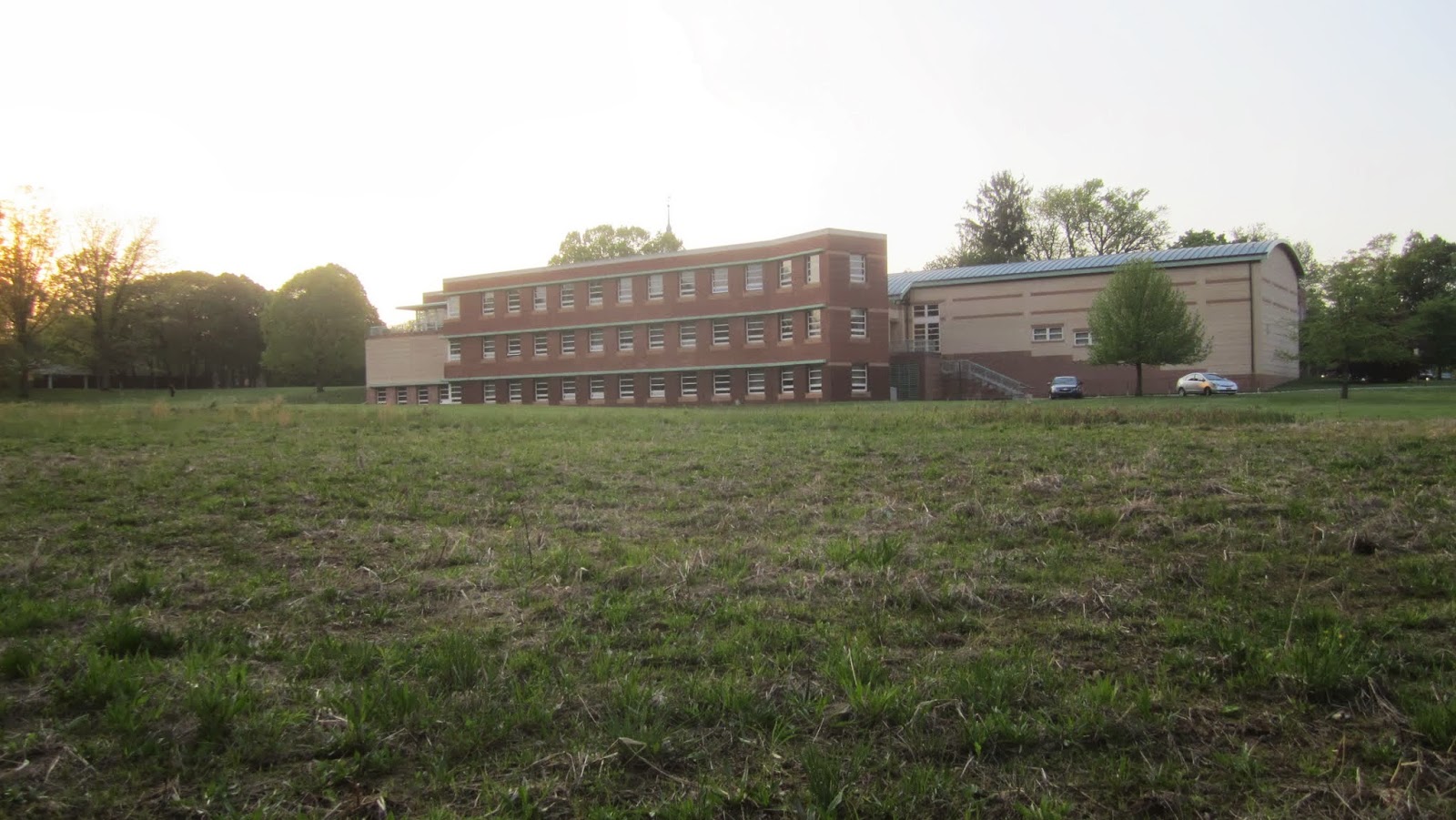 One endearing feature of the Institute is how it has maintained its connection with its land's history as a working farm. Just behind the building where we heard about Oppenheimer's brilliant career in physics, a farmer may soon arrive to plant some corn.

Interesting to note that Oppenheimer, though he grew up in New York City, grew deeply attached to the landscape of New Mexico when he visited a friend there, and later bought a ranch in the desert that served as a retreat for him and his colleagues and students while he was at Berkeley. When chosen to lead the Manhattan Project during World War II, Oppenheimer recommended locating it in Los Alamos, NM, in part because he believed the beautiful desert landscape would inspire the scientists. This connection between land, intellect and imagination was very much a part of Veblen's thinking a decade earlier, as he made the case early on for acquiring a large tract of land as part of the Institute for Advanced Study.

Alamo happens to be another name for aspens, which have leaves much like the Linden's.
Posted by Steve Hiltner at Tuesday, May 21, 2013