Birdwalk in the Mist 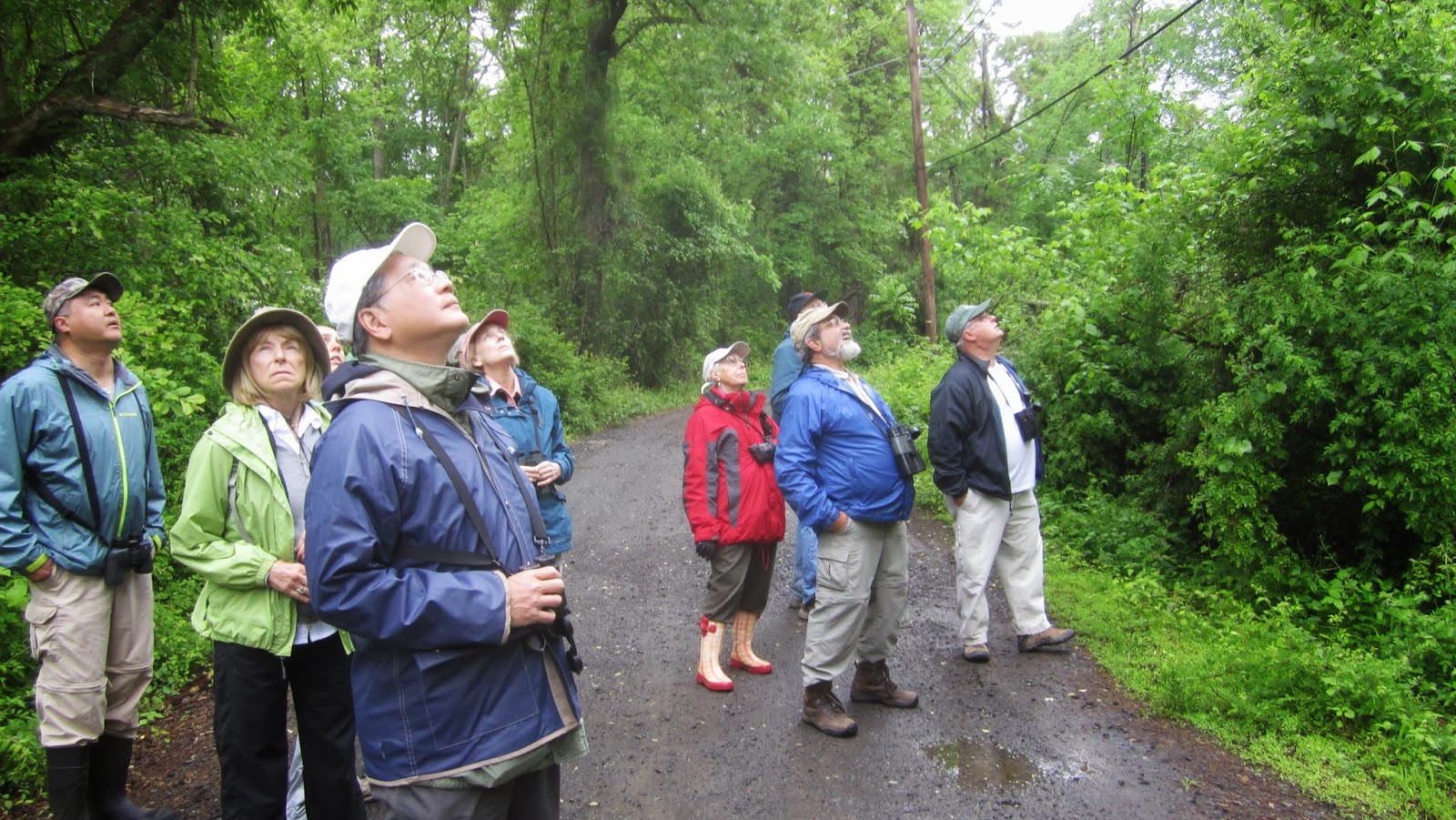 Plant people like me need extra motivation to show up for a birdwalk at 8am on a misty, moisty Sunday morning. Curiosity proved the deciding factor, specifically the question of whether clouds make birdwatching better or worse. The answer came quickly from seasoned birders. In words ascribed to Roger Tory Peterson,

At the same time, we were seeing lots of birds, or rather, hearing them. The clouds wash out the colors, making everything up in the trees appear black and white. For quite awhile, walking along the gravel road leading into Rogers Refuge below the Institute Woods, there wasn't much lifting of binoculars. Rather, a rapt attention to calls emanating from the trees above. "Northern parula!", someone would say suddenly. "Yellow throat"! "There's a Maggie," which I took to mean Magnolia warbler. Not having a memory for what in music might be called the "upper partials" of the bird world--the songs of less common birds like warblers--I contented myself with recognizing the sputter of a red-bellied woodpecker.

Mixed with the staccato calls of the birders--"Pine warbler", "chestnut-sided"--were two overarching narratives running in contrary motion. One was of lost abundance. Bird numbers are down. What we see now pales in comparison to the 1960's and 70's. Those little green inchworms, so important to converting energy from the oak trees into energy for the warblers' northward migration, are now rarely seen, for reasons unclear. I suggested that the canopy is much higher now than it was forty years ago, so they may simply be out of sight, but hard to say.

The other narrative, more cheering, came from Winnie and Fred Spar, who lead the Friends of Rogers Refuge group. They speak of the resurgence in the shrub layer in the forest, which in turn has provided cover and nesting sites for ovenbirds and other species that have become much more abundant in the refuge. For the first time in 25 years, warbling vireo nests have been sighted there. And it's hard to be too glum when a chestnut-sided warbler is saying "Please, please, please to meet'cha". (check out bird mnemonics at this link). 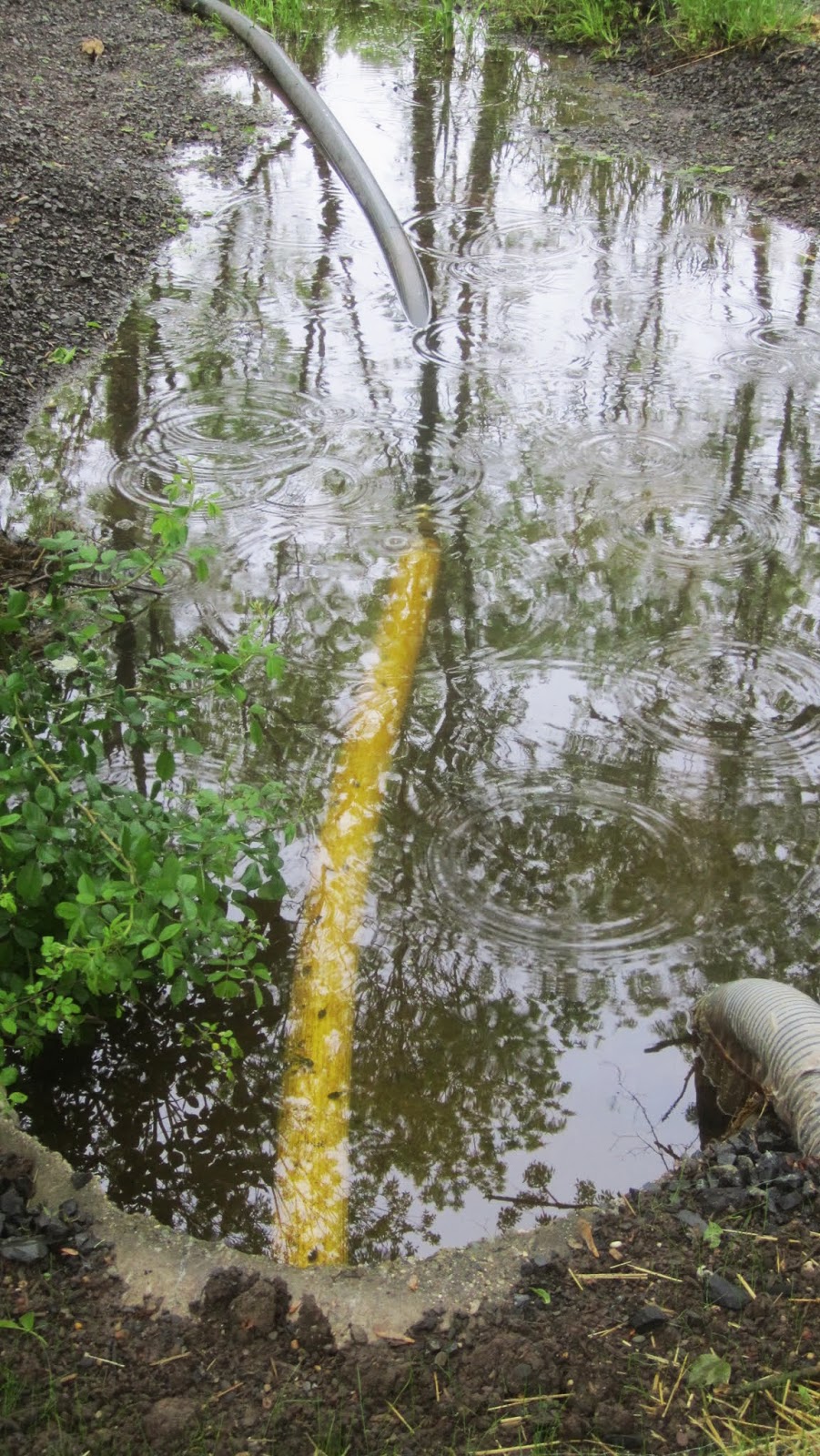 The Friends group, of which I'm a part, can point to some initiatives that may be making a difference. Some water from the StonyBrook is getting pumped into the lower marsh this year to improve habitat. There's an ongoing battle to keep Phragmitis from taking over the upper marsh, and new birdhouses have been installed. But the biggest factor, less controversial than it used to be, is the hunting and professional sharp shooting that has brought the deer population more into ecological balance. Not many years back, the native spicebush that birds need in the understory had been decimated by the deer. Now it thrives.

People, in effect, through community policy, have taken responsibility for filling the ecological void left when the natural predators of deer were driven from the land. It's a story of how, even as widespread habitat loss and rapidly changing climate work against the birds, people can contribute to restoring balance and diversity. 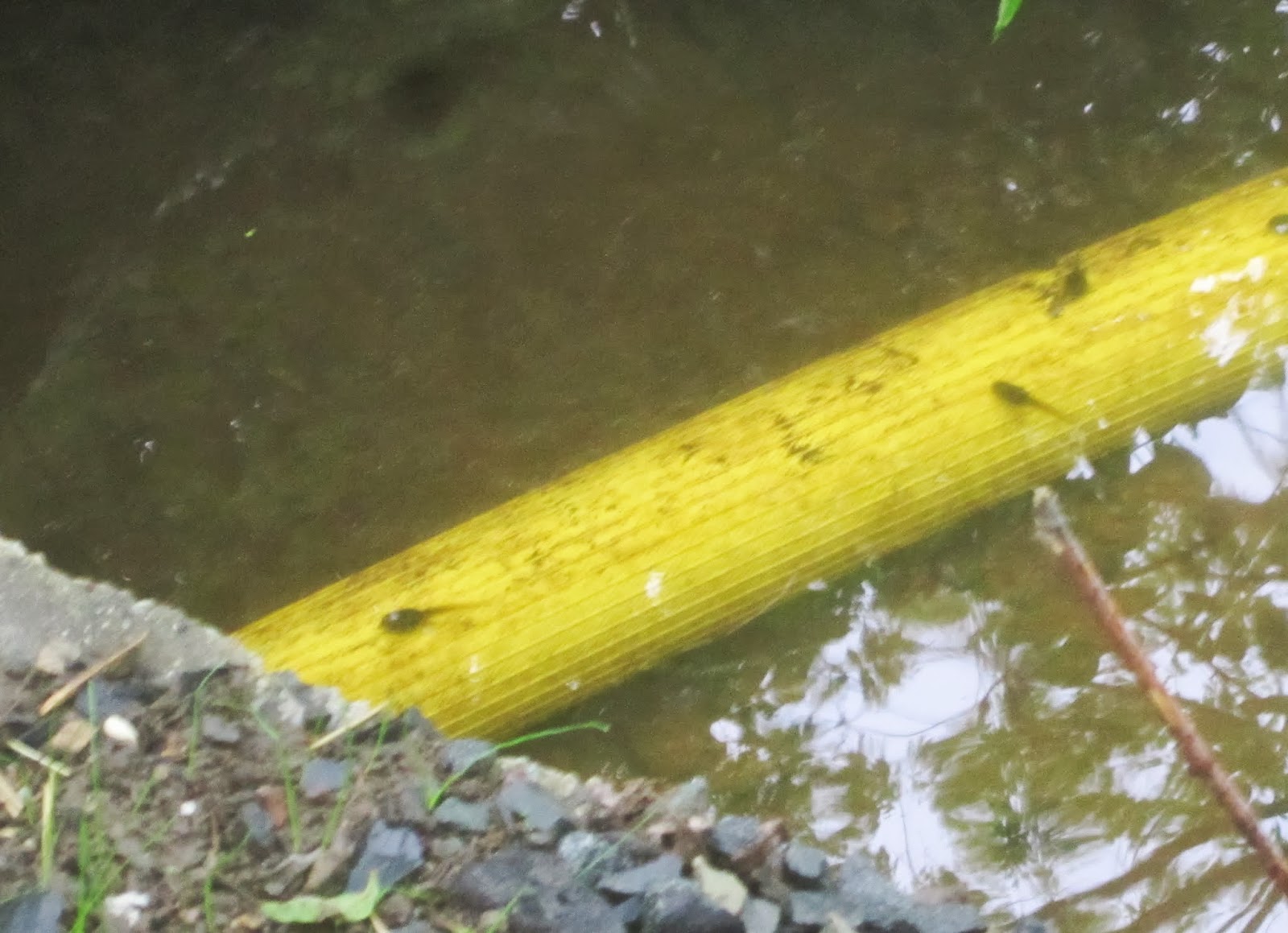 Frogs are in even more rapid decline around the world, making this sighting of tadpoles particularly welcome. 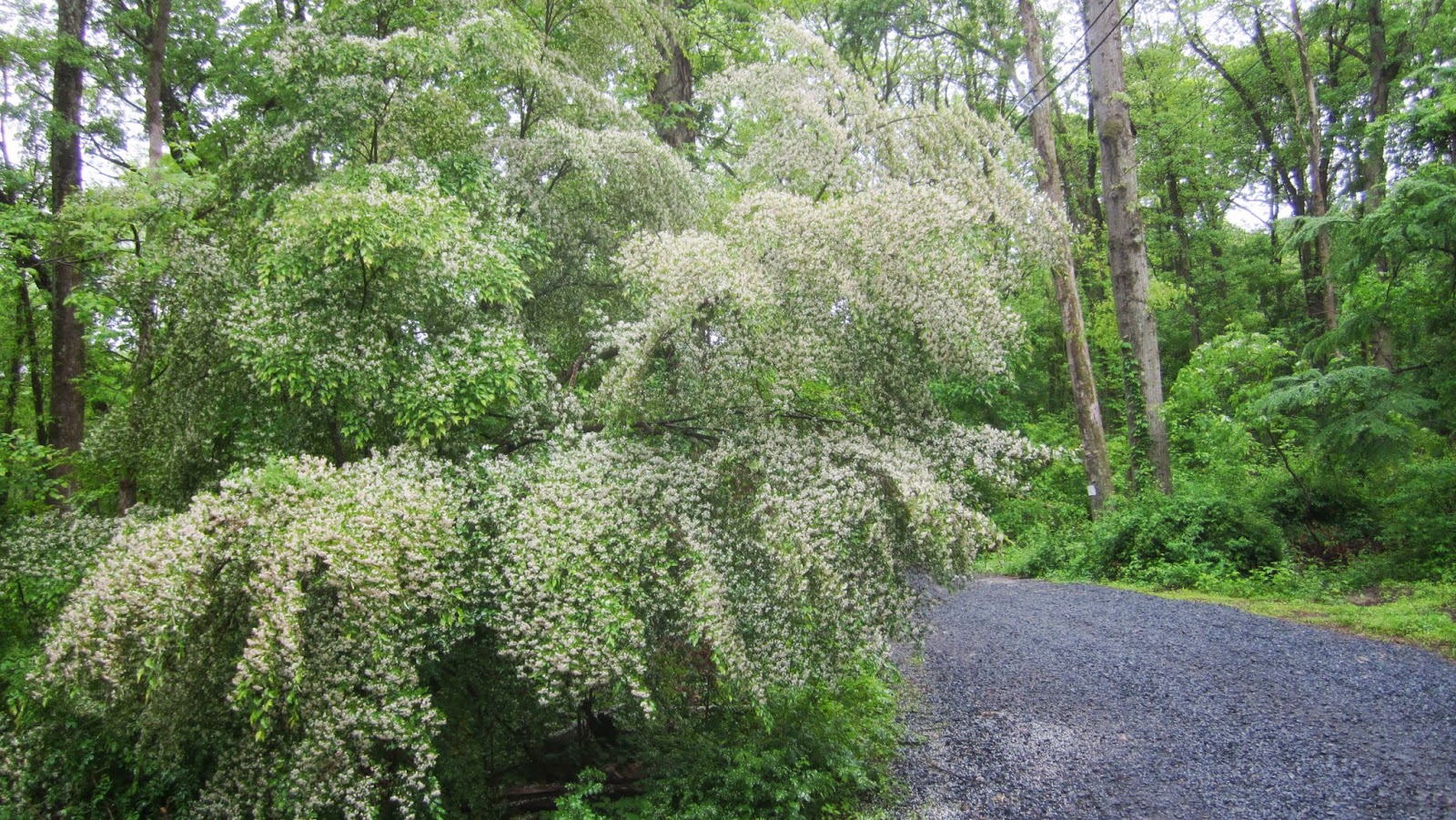 I found the plants to be a lot easier to see than the birds. They stay in one place, and don't fly off when you approach. Very convenient, though it doesn't always make identification a snap. This small tree, discovered while I was doing an ecological assessment and stewardship plan for the refuge in 2008, still eludes attempts to give it a name. 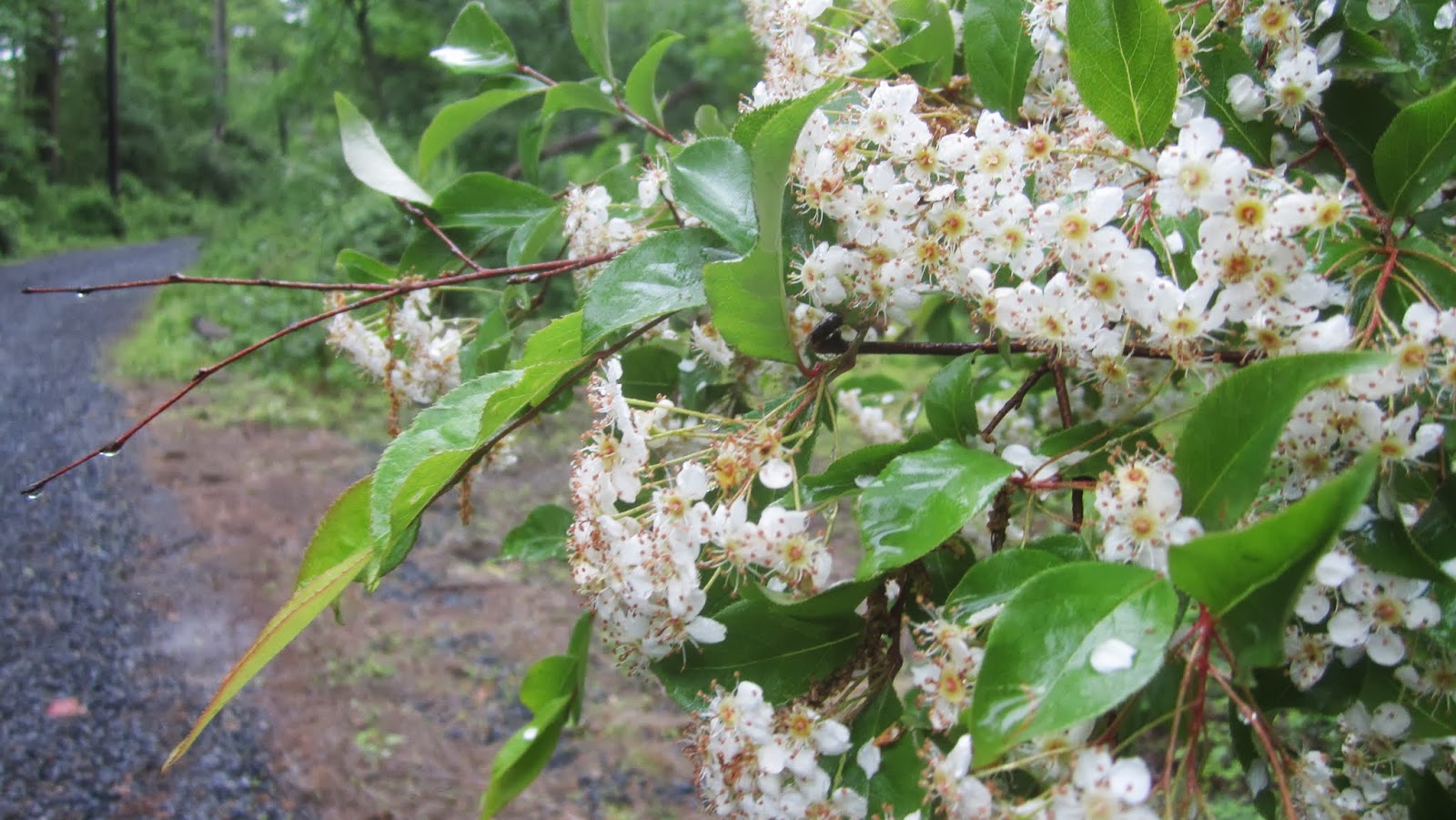 Clearly related to cherries, it grows here and seemingly nowhere else in Princeton. 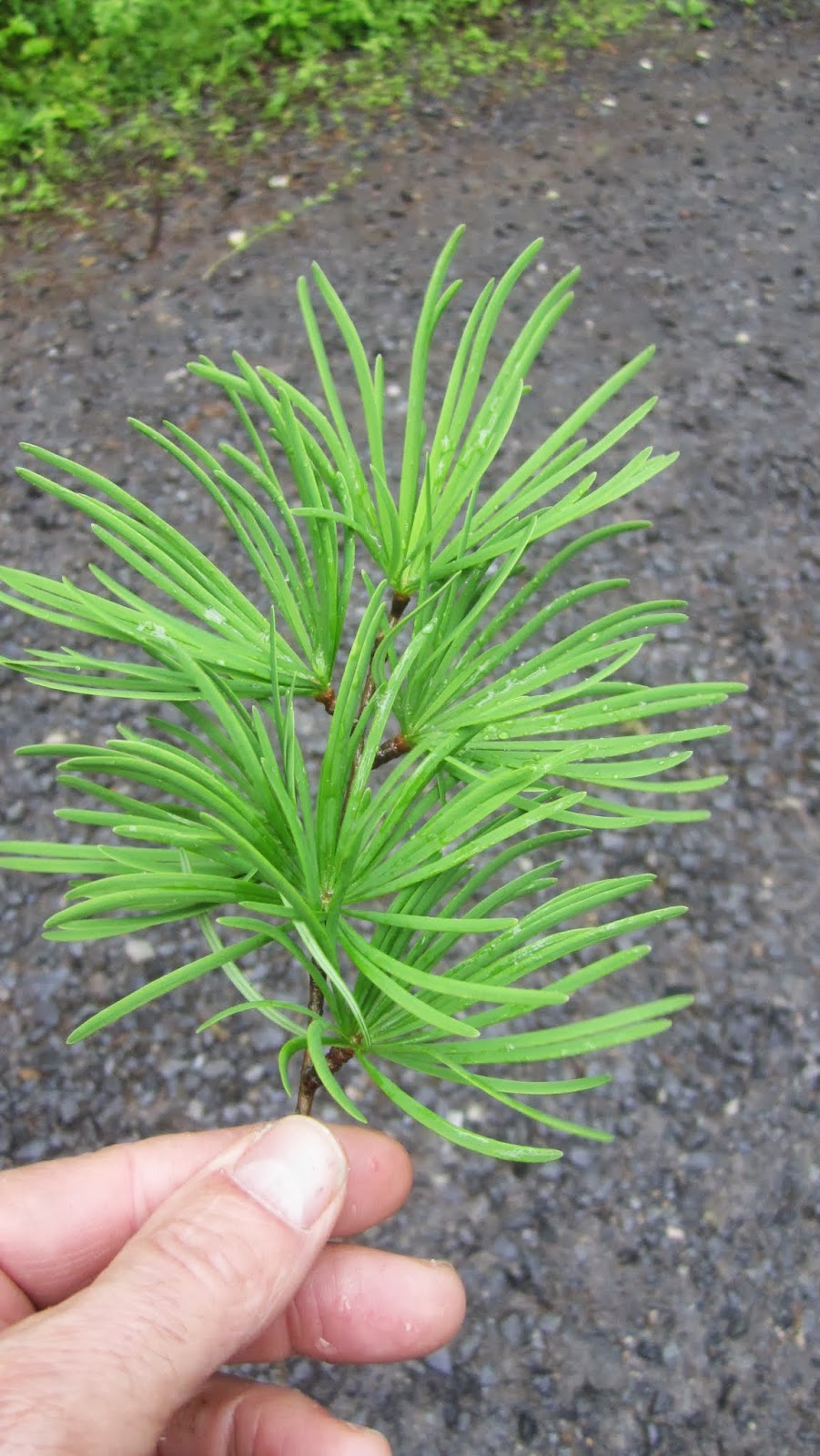 Just across the road was another unusual tree, a Golden Larch, whose scientific name, Pseudolarix, is latin for fake larch. Having two unusual species together suggests that the location was either a home site a long time ago, or was otherwise significant enough to be planted. 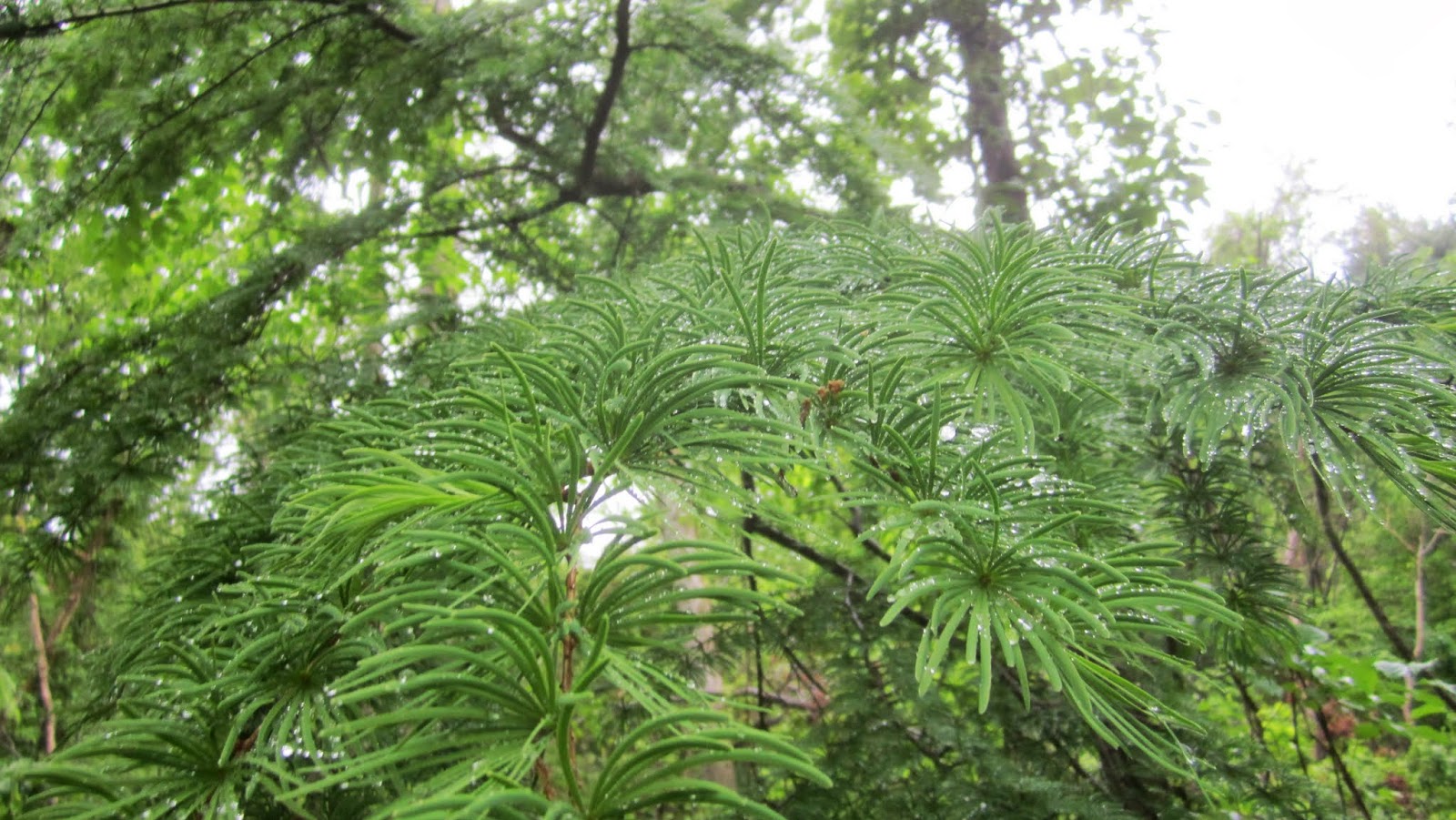 The golden larch's needles are longer than those typically found on a larch or our native tamarack. 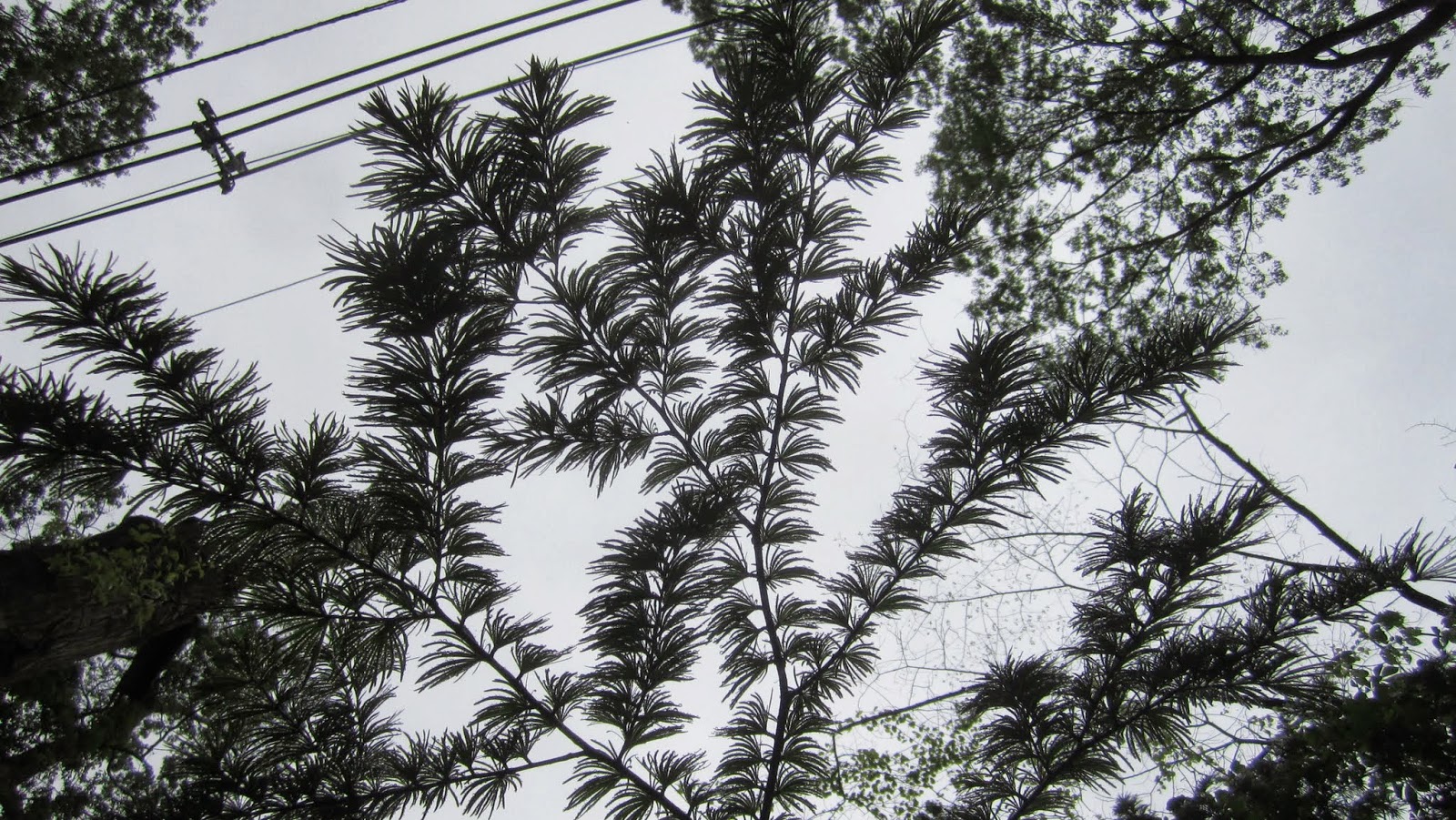 You can see how even this tree's deep green turns black against the white sky. Despite this, we got good looks at the vivid colors of a scarlet tanager, a baltimore oriole and an American redstart. 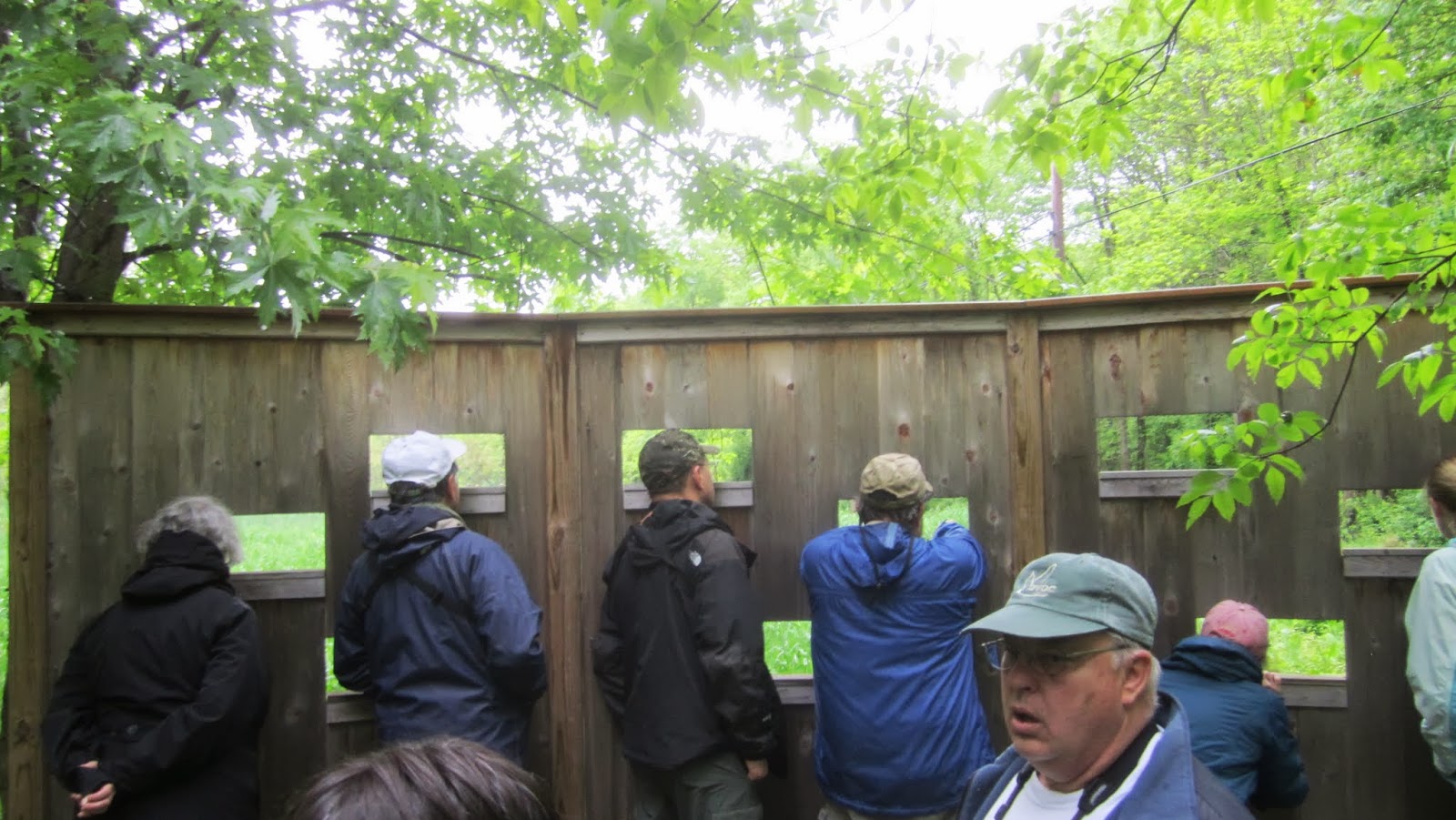 We headed over to the bird blind, built by the Friends a few years ago, with windows reminiscent of an advent calendar. That's our Washington Crossing Audubon walk leader in front, Mark Witmer. 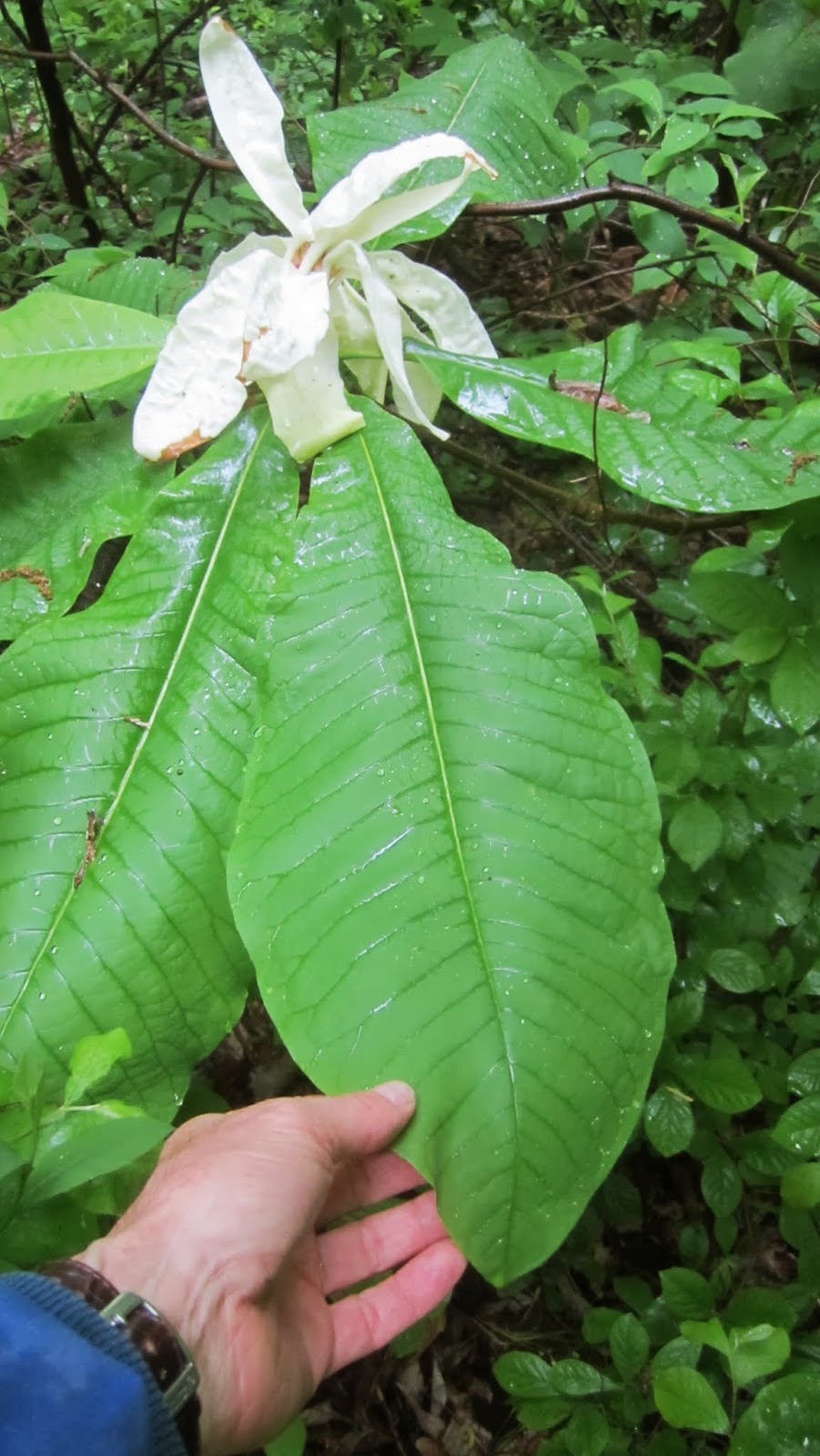 The walk continued around the refuge's marsh and into Institute Woods. We began talking amongst ourselves more and listening less. I was sidetracked by a patch of umbrella magnolia, 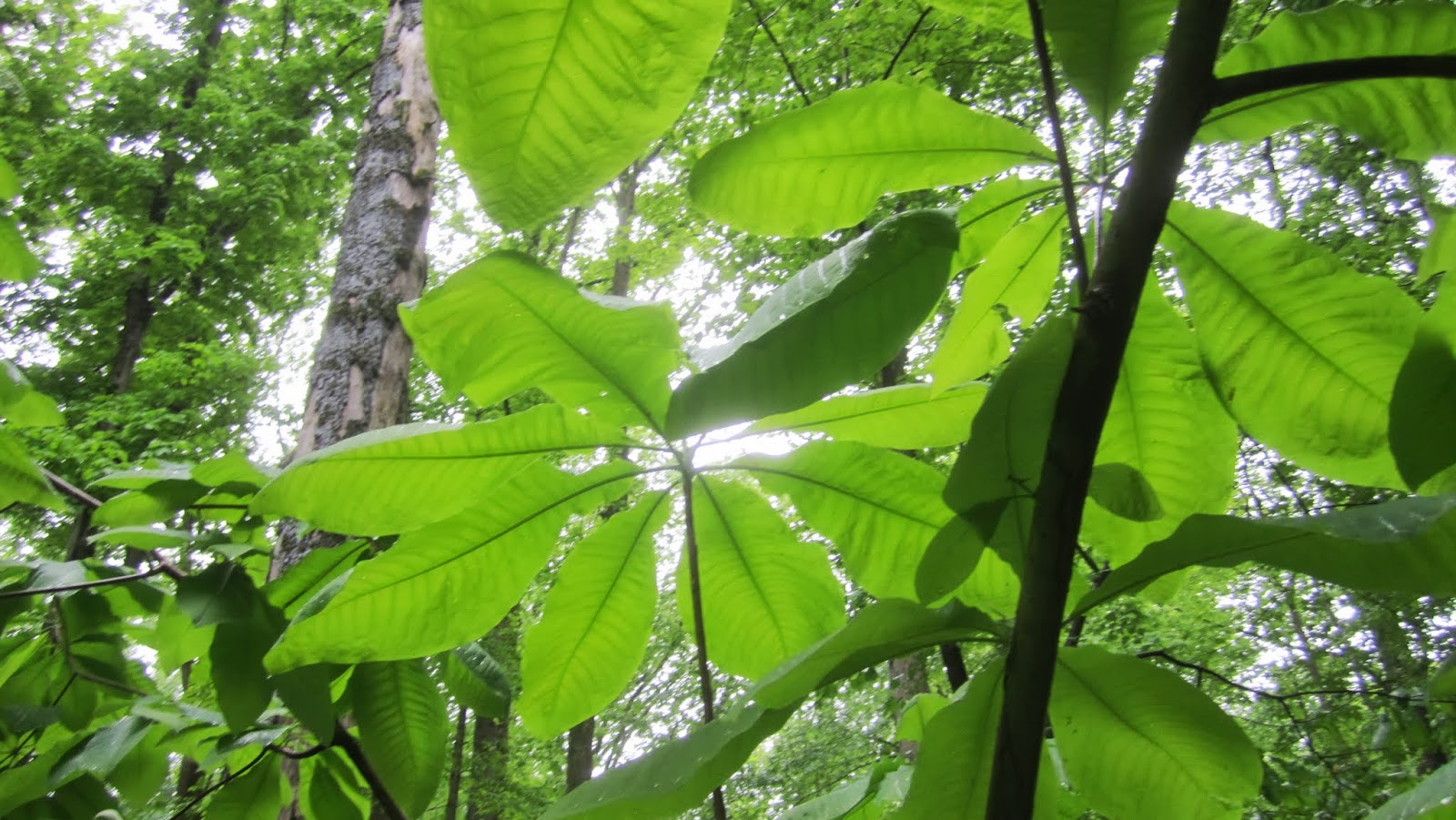 and then headed back to the car, my mind glad for the new population of bird names flitting from one neuron to another: "pine warbler, Canada warbler, hairy woodpecker, chimney swift....." The rain held off, the birds held forth, and curiosity is a good thing to hold on to.