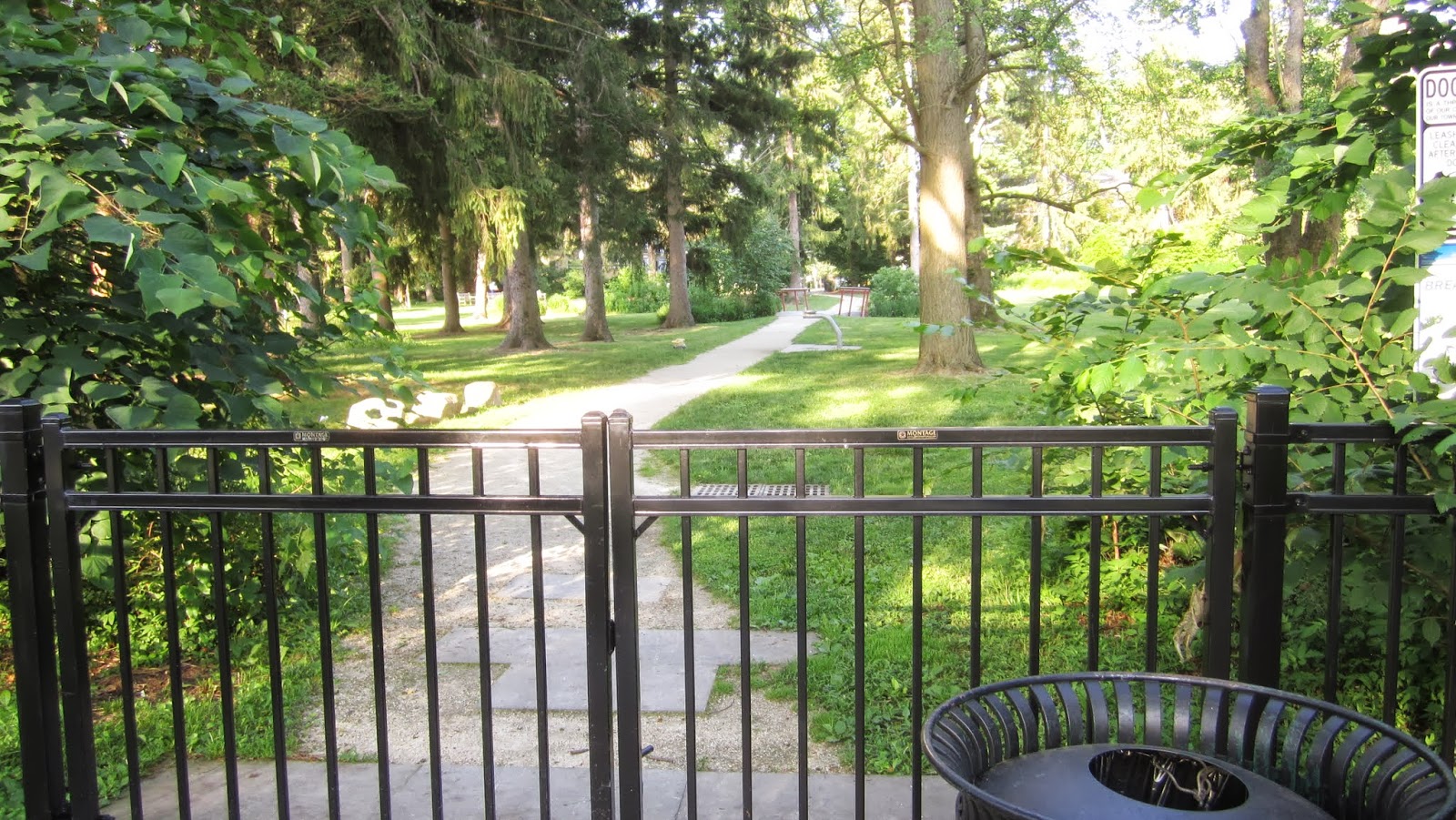 From time to time, the monotony of trees and turf  in town landscapes triggers the impulse to plant native gardens in public spaces. Such was the case with Princeton's Harrison Street Park 3 years ago, when some $30,000 of native plants were installed as part of this formerly borough park's renovation. Ideally, plantings like this can make static landscapes more beautiful and dynamic, reduce runoff by replacing shallow rooted grass with deeply rooted perennials and shrubs, and provide food and cover for wildlife, particularly beneficial insects like pollinators. There's also the chance that adults, at loose ends while their children play, and kids exploring the park, will notice some of the native diversity and take an interest.

But the one-time act of planting is not the same as the long haul of tending, much as a one night stand differs from a marriage. Neighborhood volunteers worked heroically the first season, in 2010, to keep the plantings alive. (Is it pure coincidence that an ambitious planting of native plants always seems to be followed by a horrendous drought?). The success of that first season, critical as it was, still leaves all the years that follow. With municipal funding often skewed towards capital improvements rather than long term maintenance, who will maintain the plantings, or, more to the point, who will care enough, love them enough, or otherwise be paid enough, to be there dependably, knowledgeably, energetically, to safeguard the initial investment and intervene before problems spin out of control? 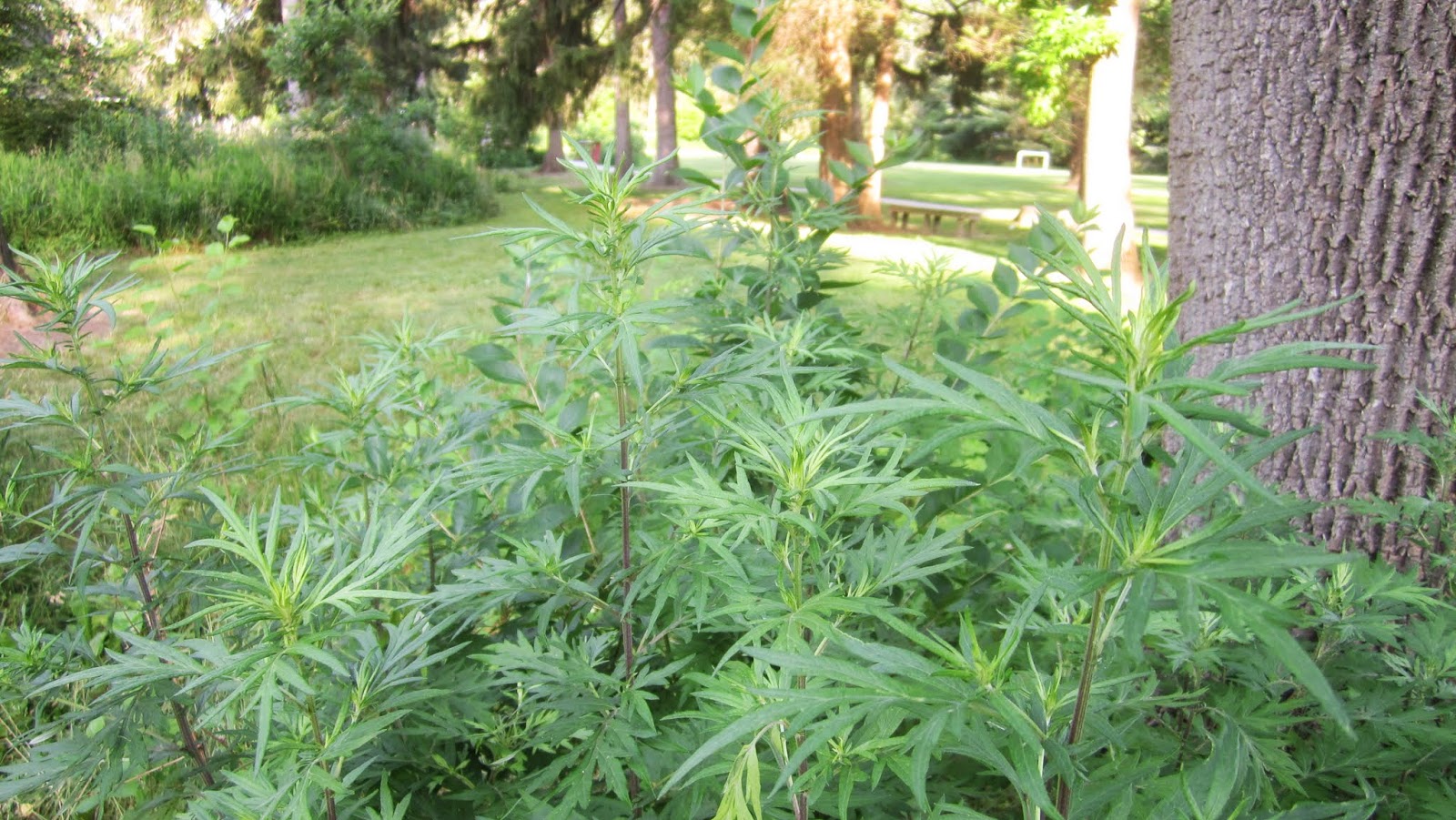 That question has thus far remained unanswered, as the well-known botanical bully mugwort mugs the intended plants in one bed, 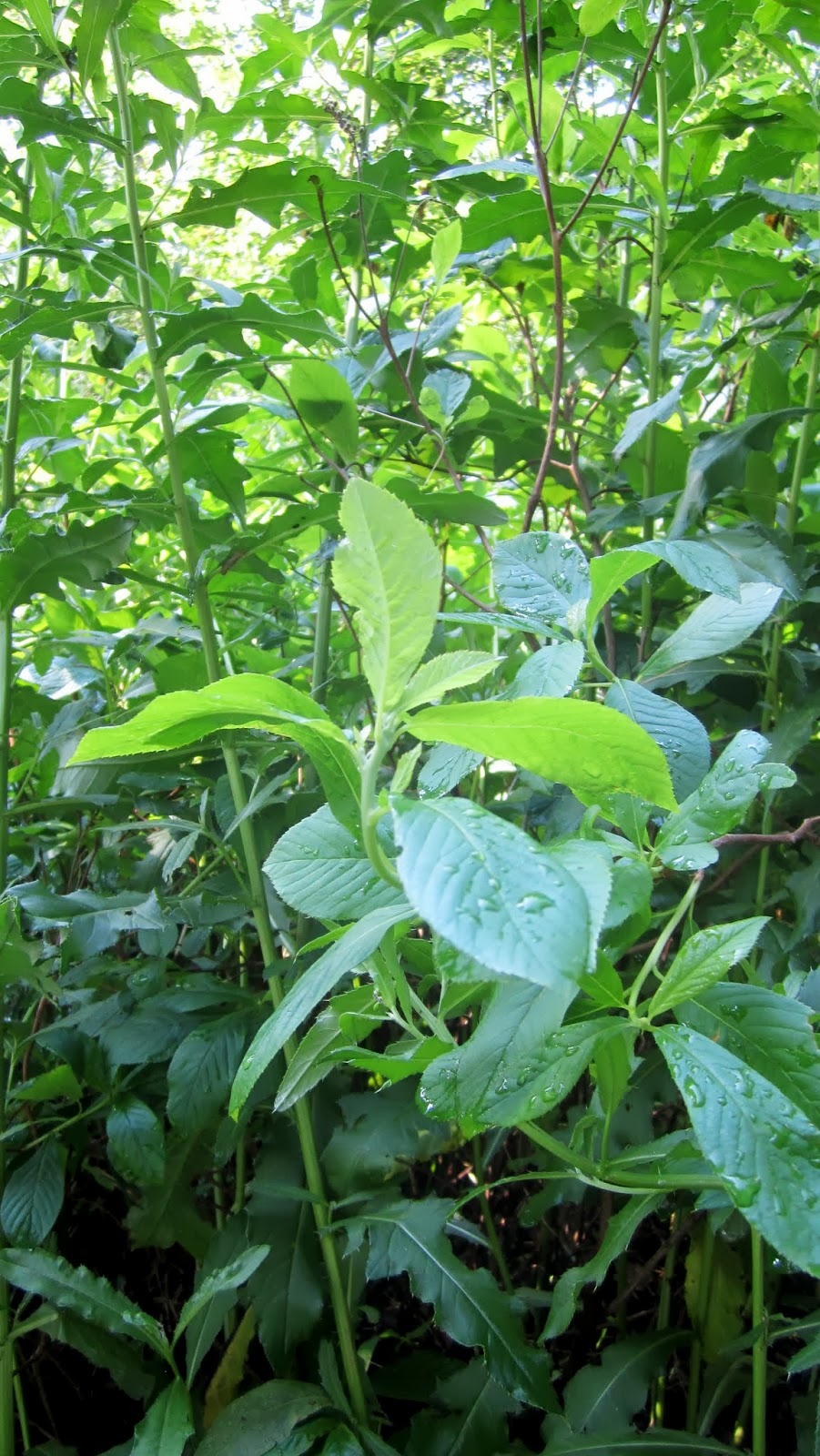 a summersweet shrub struggles to find light amidst towering Canada thistles in another, 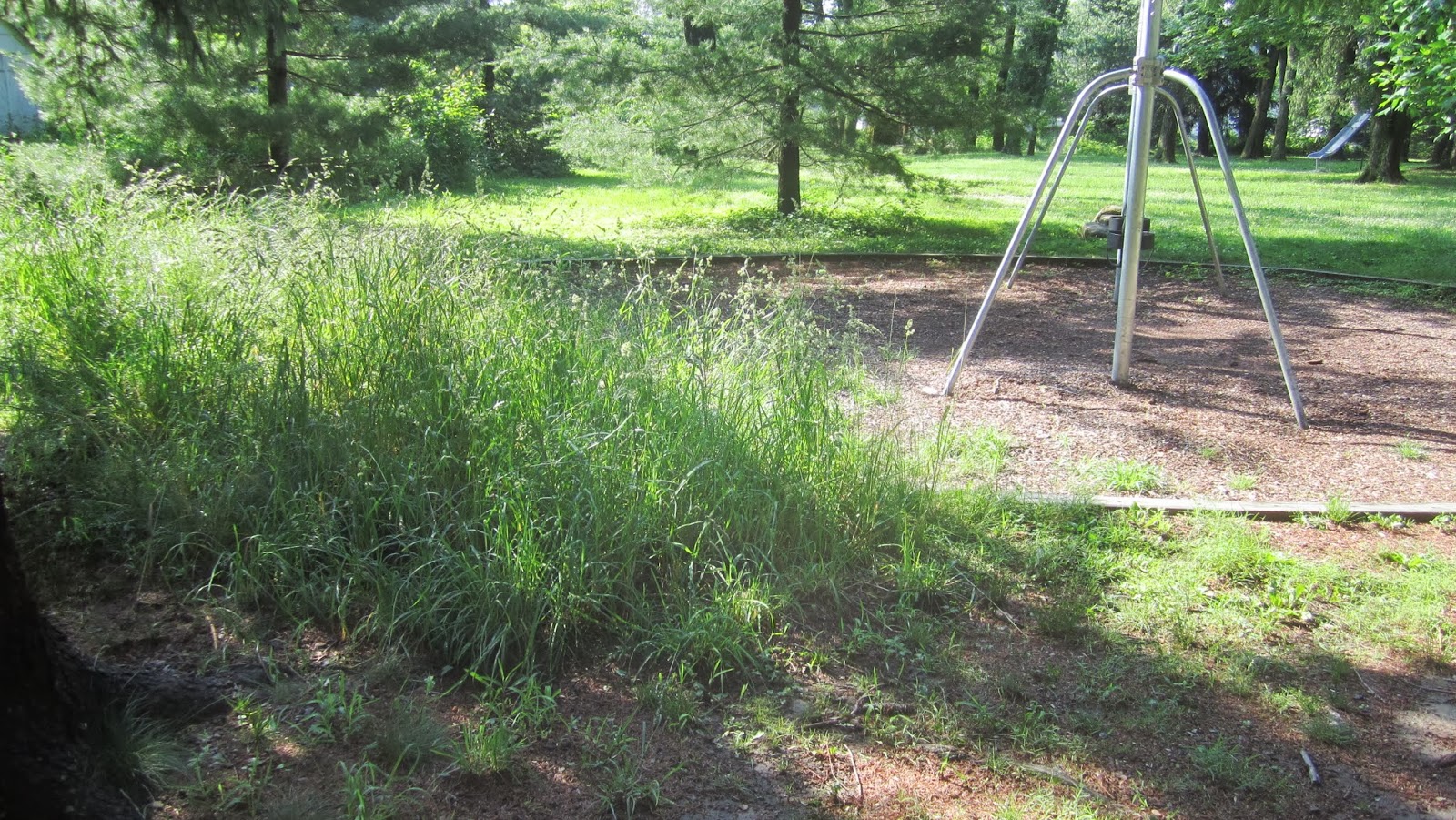 weedy grasses overwhelm whatever plantings were meant to occupy the berm next to the swingset, 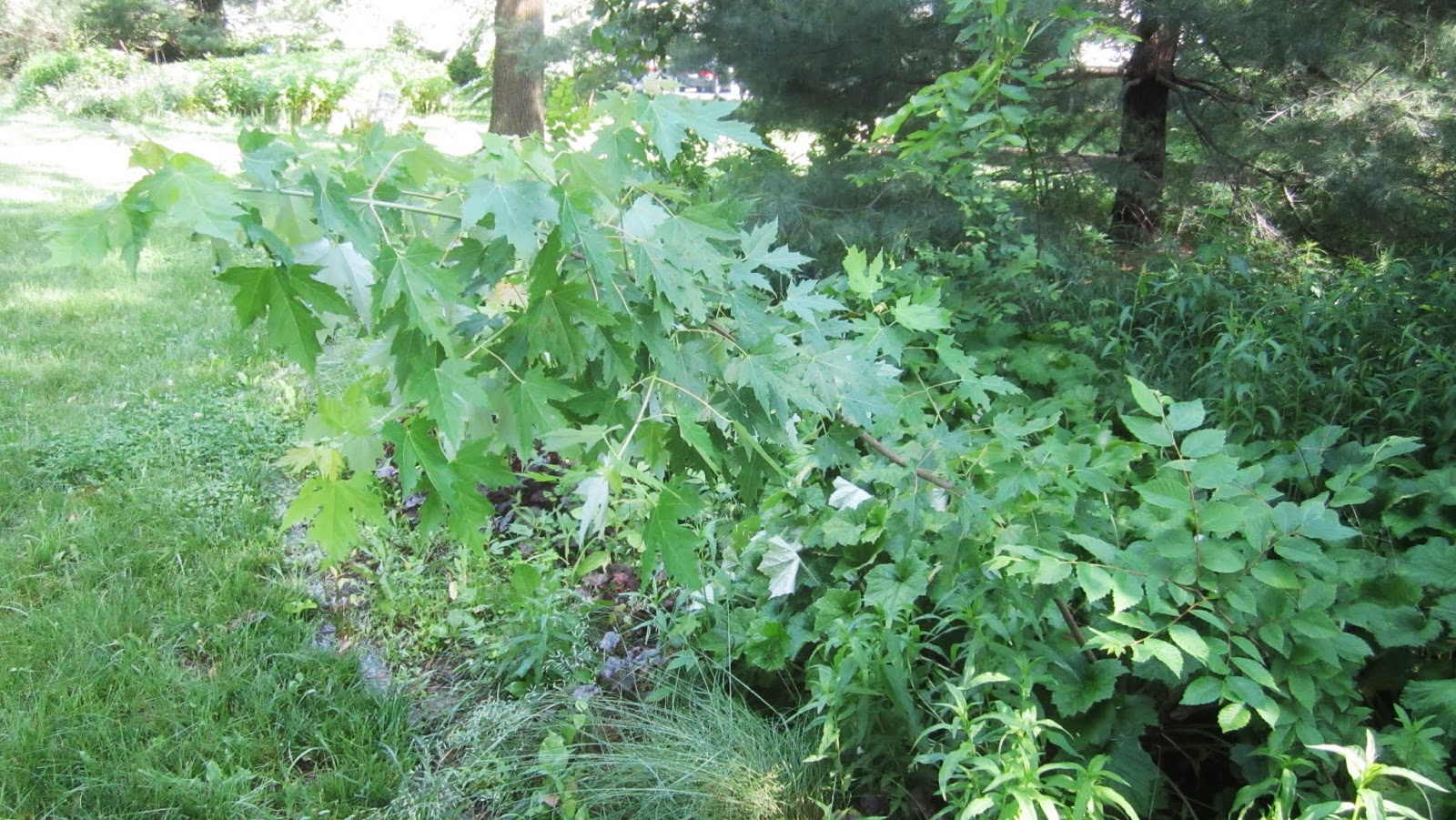 and a volunteer silver maple seedling juts awkwardly out where low wildflowers were meant to ornament the entryway. 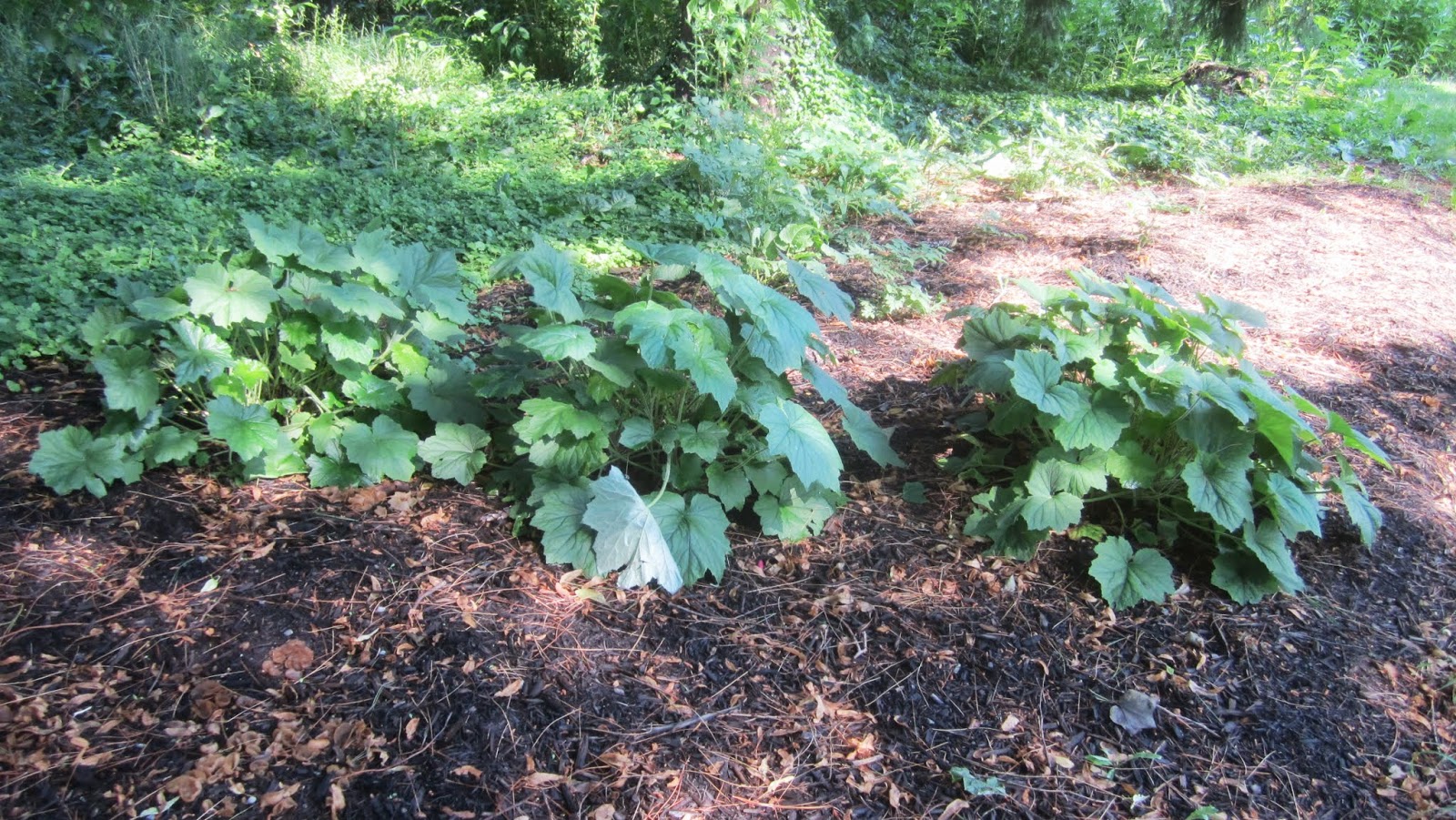 Even these few plants that are well-mulched and free of weeds have a sea of ground ivy headed their way.

"All natural", one might say, as one cites Darwin's survival of the fittest and eases back into the easy chair of indifference. But a town park is not a healthy ecosystem with all the complex components needed to maintain balance. It's a rigged game from the start. The soil is full of seeds of plant species that evolved on other continents and left all their checks and balances behind when they were brought here. One can make educated guesses about which native plants will grow best where, but without ongoing t.l.c. the weeds will take over and the beds will eventually be mowed down, bringing back the trees n' turf landscape that neighbors said they didn't want.

The lack of needed attention points to a longstanding gap in municipal staffing. As far as I know, not one parks maintenance employee can identify even a few of the native plants installed at considerable expense in Harrison Street Park. The town has an arborist, police, teachers--all trained to nurture and maintain a positive and conducive order among, respectively, trees, adults and children, and yet when it comes to the large majority of the plant world that doesn't have the good fortune to contain wood, we put someone on a lawnmower and tell them to have at it.

Maybe the newly formed Princeton parks commission can address this. Maybe there needs to be a skilled landscaper employed for enough hours to help organize and oversee volunteer days of the sort that kept the Harrison Street Park plantings alive their first summer. The more one stays on top of things, the less work it takes. In the meantime, a significant investment and a worthy approach to enriching the park experience is quietly being lost in a sea of weeds.