Monocultures in the Making

Around Princeton, I've been watching with a sense of foreboding the increasing presence of two species that, though still uncommon here, have proven extremely invasive elsewhere. One is of Asian origin, the other a native from the coast that's rapidly expanding its range. 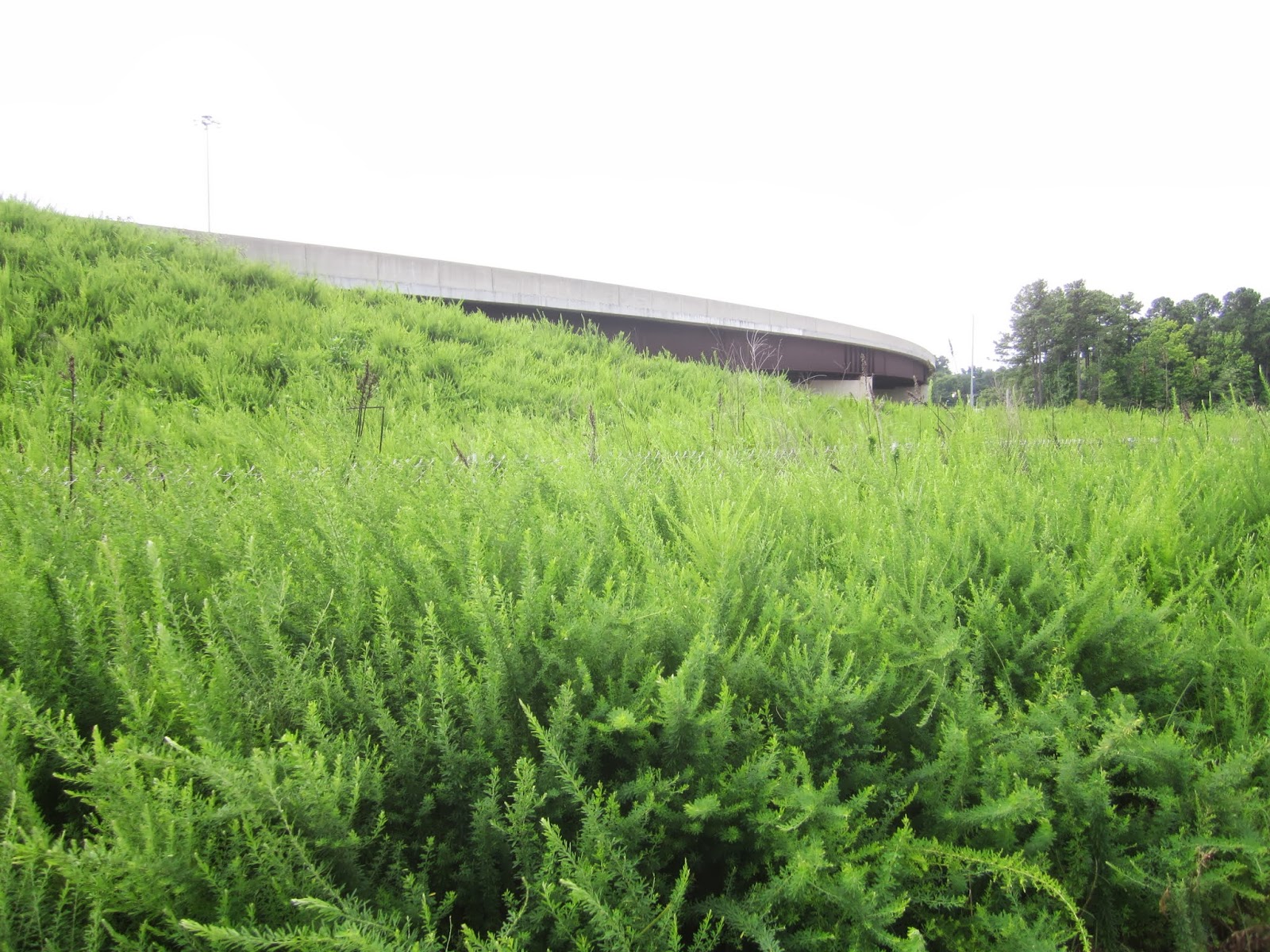 Chinese bush clover, also known as Sericea lespedeza (Lespedeza cuneata), is widely used by departments of transportation (DOT) to quickly vegetate ground made bare by road construction. When it was introduced, it was hailed as a good wildlife food, but later analysis showed that its seeds, smaller than native bush clover seeds, passed through birds' digestive systems intact--convenient for the plant's dissemination but useless for the wildlife. Though Chinese bushclover is good at holding soil in place, it is so aggressive that it excludes other grassland species, forming in time a monoculture. It serves one environmental goal (erosion control) while sabotaging another (biodiversity).

In Princeton, Chinese bush clover can be found most frequently along Transco's pipeline right of way, either planted intentionally or accidentally introduced as a contaminant in a seed mix. These rights of way currently host a fairly diverse mix of grasses and wildflowers, but given Chinese bushclover's behavior elsewhere (the photo shows a freeway embankment in Durham, NC), it's only a matter of time before those rights of way lose their diversity and most of their value for wildlife.

Particularly with so many rights of way being built or expanded, there's an urgent need to shift to seed mixes with species that establish quickly but also allow a diverse mix of native species to establish over time. I fought this fight while living in North Carolina, suggesting alternatives like the native partridge pea or, if need be, exotic species that would establish quickly but then allow other species to move in. Together, roadsides and rights of way comprise a vast amount of acreage. What grows in them helps determine how hospitable the world is for wildlife and plant diversity. If you've ever tried to reform a Department of Transportation, though, you know what it's like to be David going up against Goliath, holding a partridge pea flower instead of a slingshot. 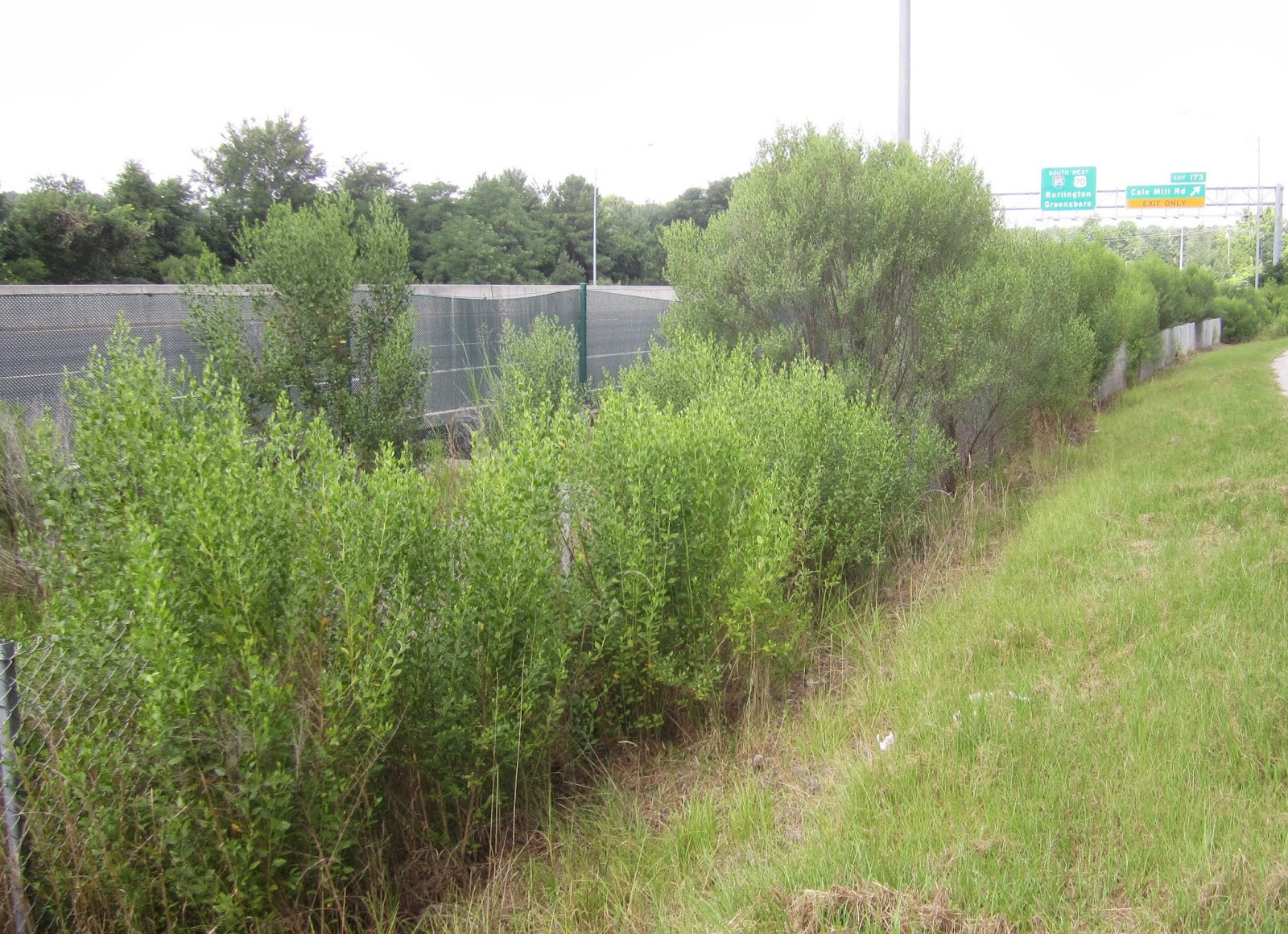 When I first encountered Groundsel Tree (Baccharis halimifolia) along an abandoned trainline in NC, I wondered what was this distinctive, attractive bush with the abundant white flowers so late in the fall. In recent years, though, I've watched it take over meadows, shading out the herbaceous species, and completely dominate along roadways, replacing diverse vegetation with a monoculture. Baccharis is native to the eastern U.S. coastal plain, but has spread inland to the piedmont along roadways, and is beginning to show up along Route 1. (Photo is from I-85 in Durham, NC) 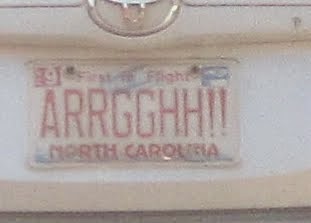 This license plate speaks for all who witness nature being gradually thrown out of balance.