A Morning of Music, Young Minds, and a Monarch 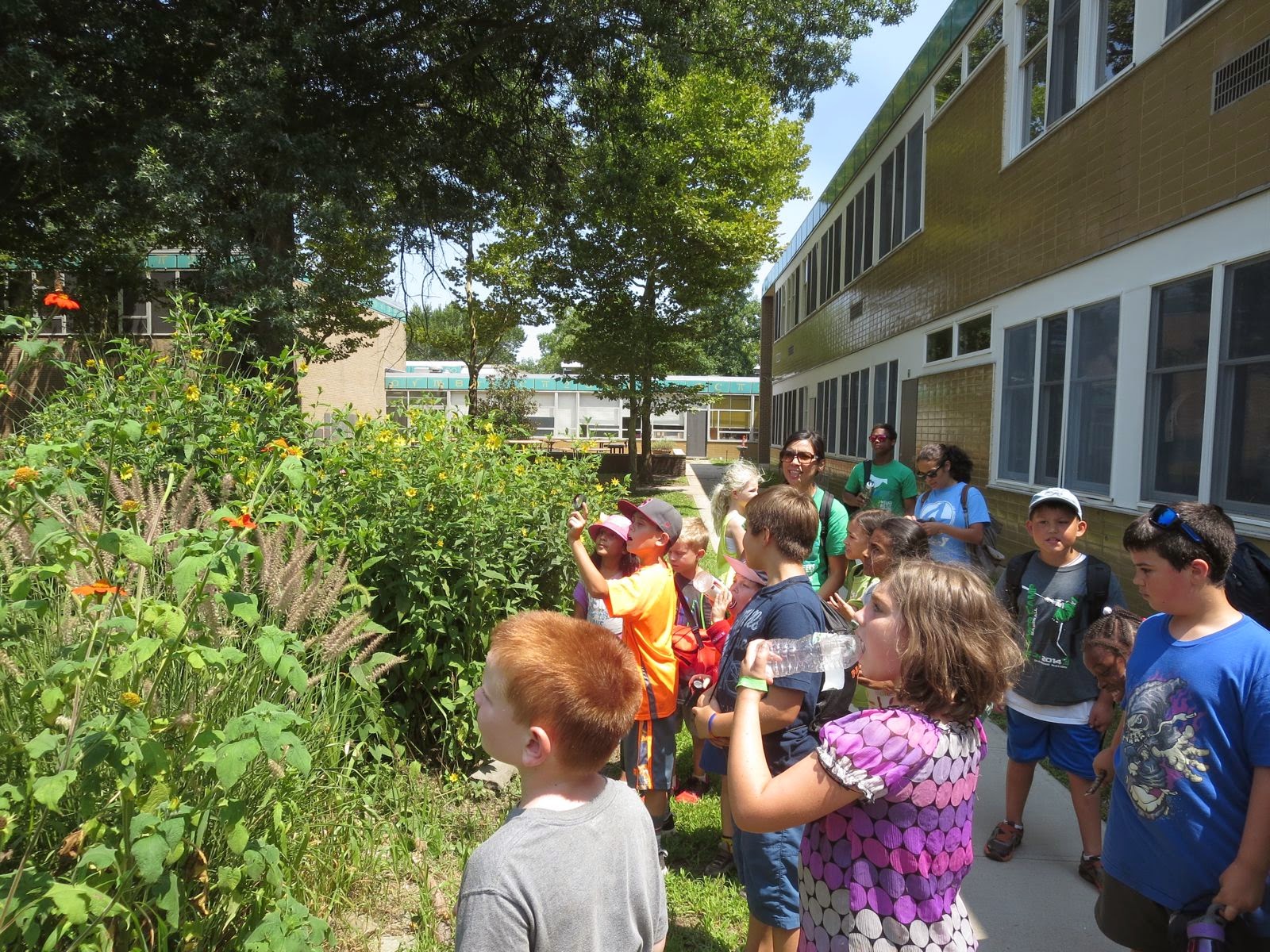 Last month, Martha Friend, the science teacher at Little Brook Elementary who is also very active in summer programming for kids in Princeton, sent me an email in August asking if I could drop by the Pannell Learning Center and do a program on music and nature with some kids in a YMCA camp. I had never heard of the Pannell Center, which is at the corner of Clay and Witherspoon, and wasn't sure how to incorporate music into nature study, but showed up with an open mind and a clarinet.

The kids, under the motivating guidance of class teacher Rosie, had just finished building musical instruments using straws. After hearing their impressive musical offerings from the straws, I explained that I had learned to improvise on clarinet while out in nature, sitting on the steps of a lodge overlooking Lake Michigan, playing a note and listening to its echo come back from a nearby hill. Later, on Ossabaw Island off the coast of Savannah, Georgia, I learned to play one handed so that the other hand was free to swat mosquitoes. It was an early lesson in the challenges of the music business. I told them about the piano tunes I'd written using birdsongs, and demonstrated a few on the clarinet. That was a good segue to head out towards Community Park School to see if there were any birdsongs I could imitate. Lacking any birdsongs along the first few blocks, I filled in with When the Saints. 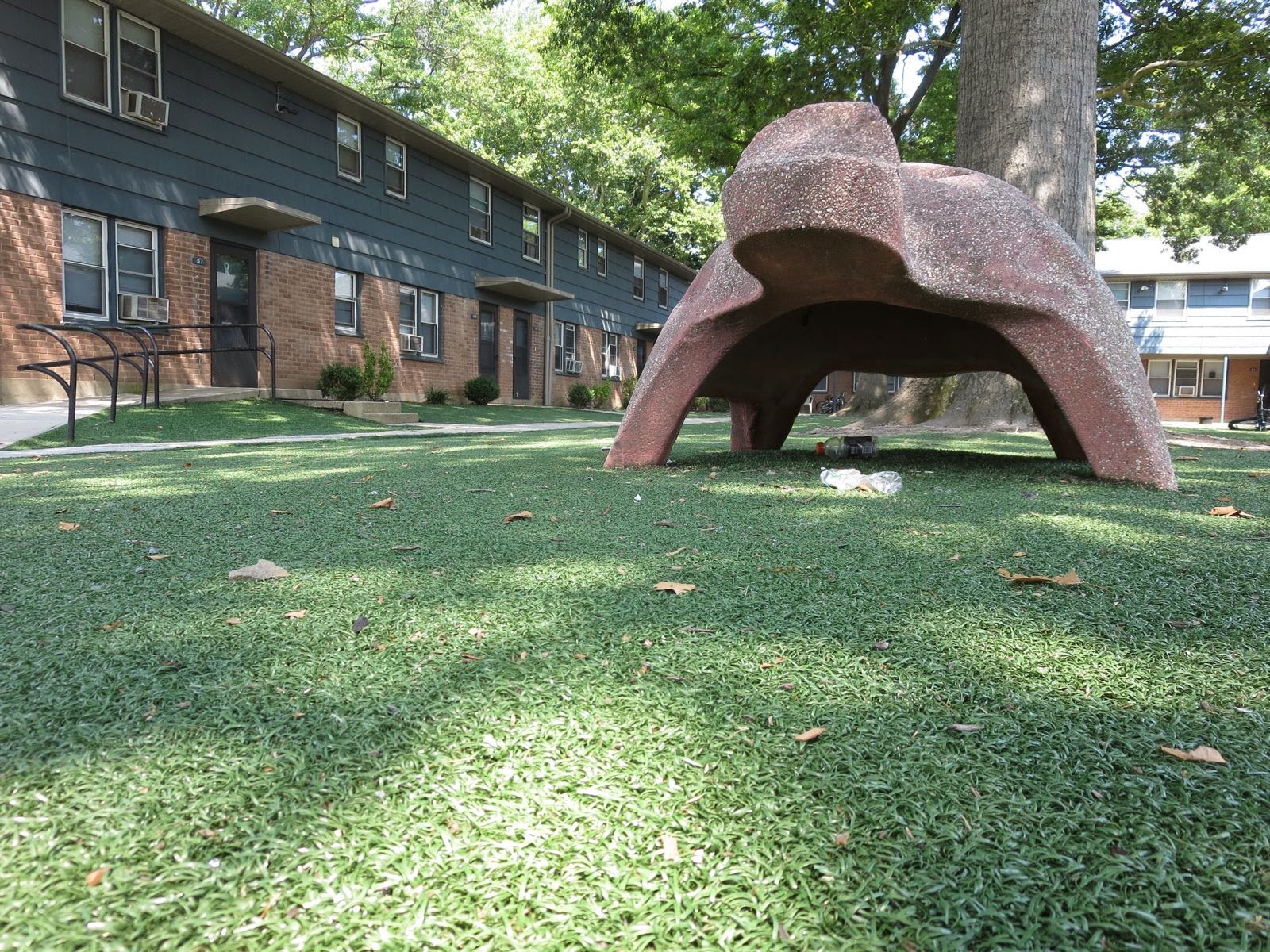 While we passed by some interesting habitat--a concrete turtle that apparently found the astroturf to its liking--Rosie told me how she had gained a love of nature during visits to her grandparents' farm in Mexico, where she was put to work caring for the animals. 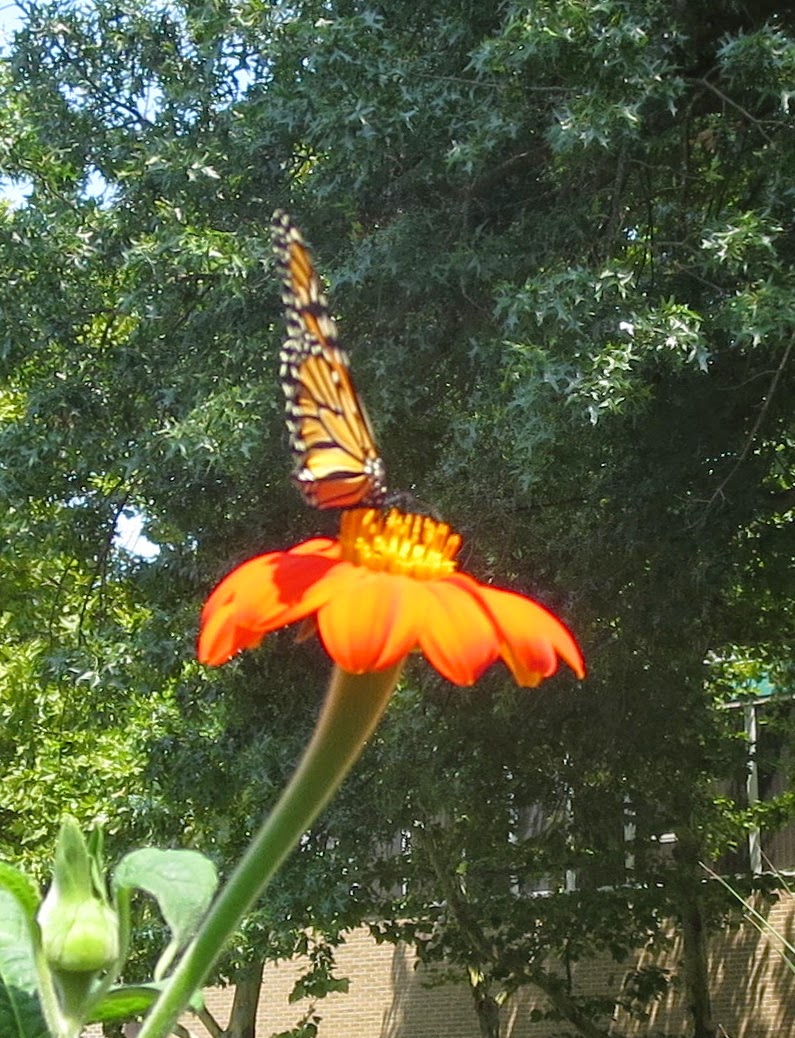 The kids ate lunch while I sought to channel a field sparrow's call through the clarinet. Then we asked the question, where do the pollinators find their lunch? Not much in the lawn beyond a few white clovers. We walked behind the school to where the Community Park Elementary's science teacher John Emmons has planted a miniature meadow.

That's where we saw lots of pollinators feasting, including a monarch--a rare sight this summer. (That's what the kids are looking at in the first photo.) 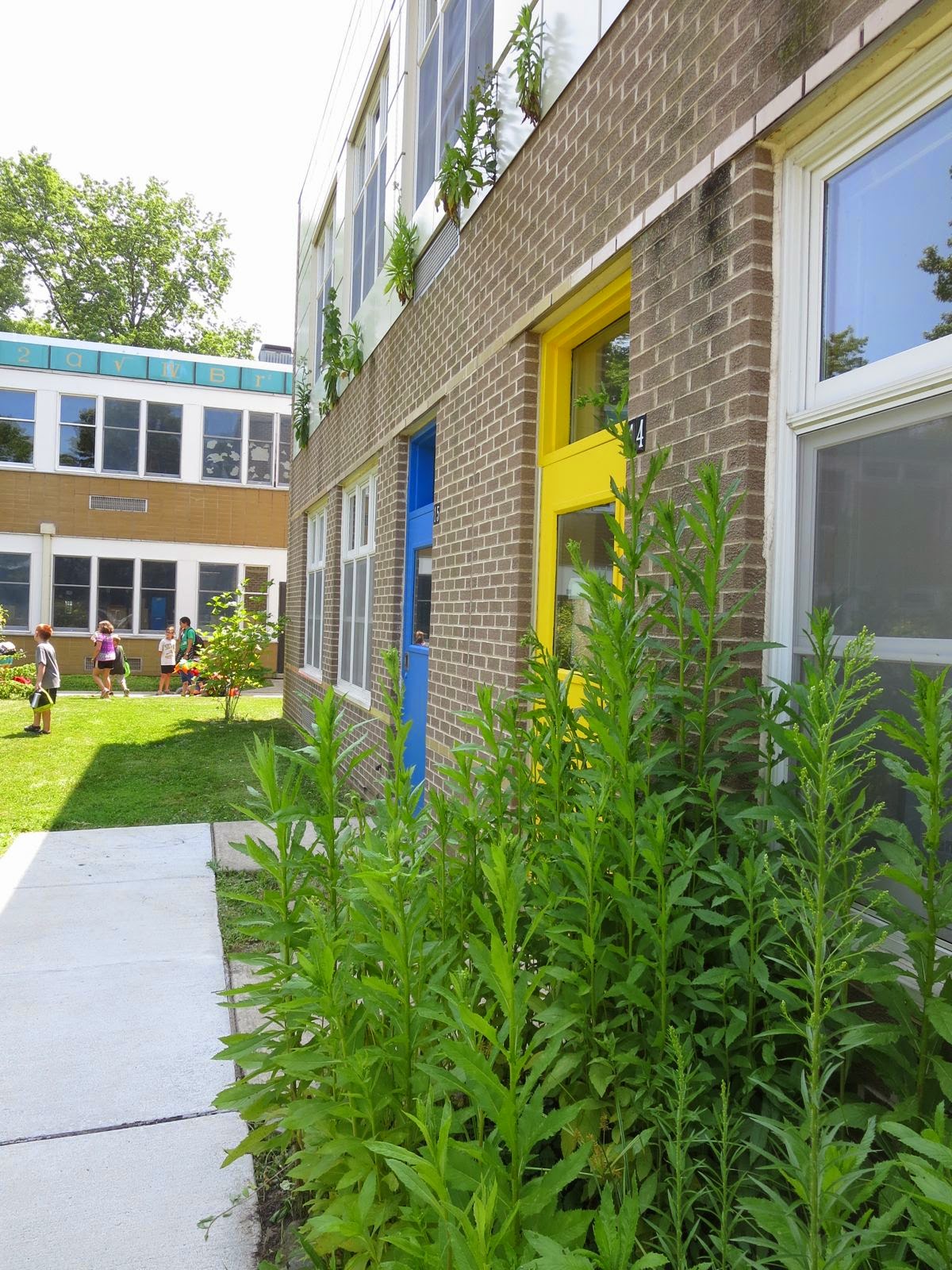 The back of the school is surrounded on three sides, making a courtyard where there's a lot of growth energy. Even the weeds in this photo (pilewort that not only grows on the ground but also one floor up on the wall) are looking good. Pilewort is a native weedy-looking plant that grows tall and fleshy but whose only ornamental offering is clusters of white seeds that the goldfinches take a liking to. 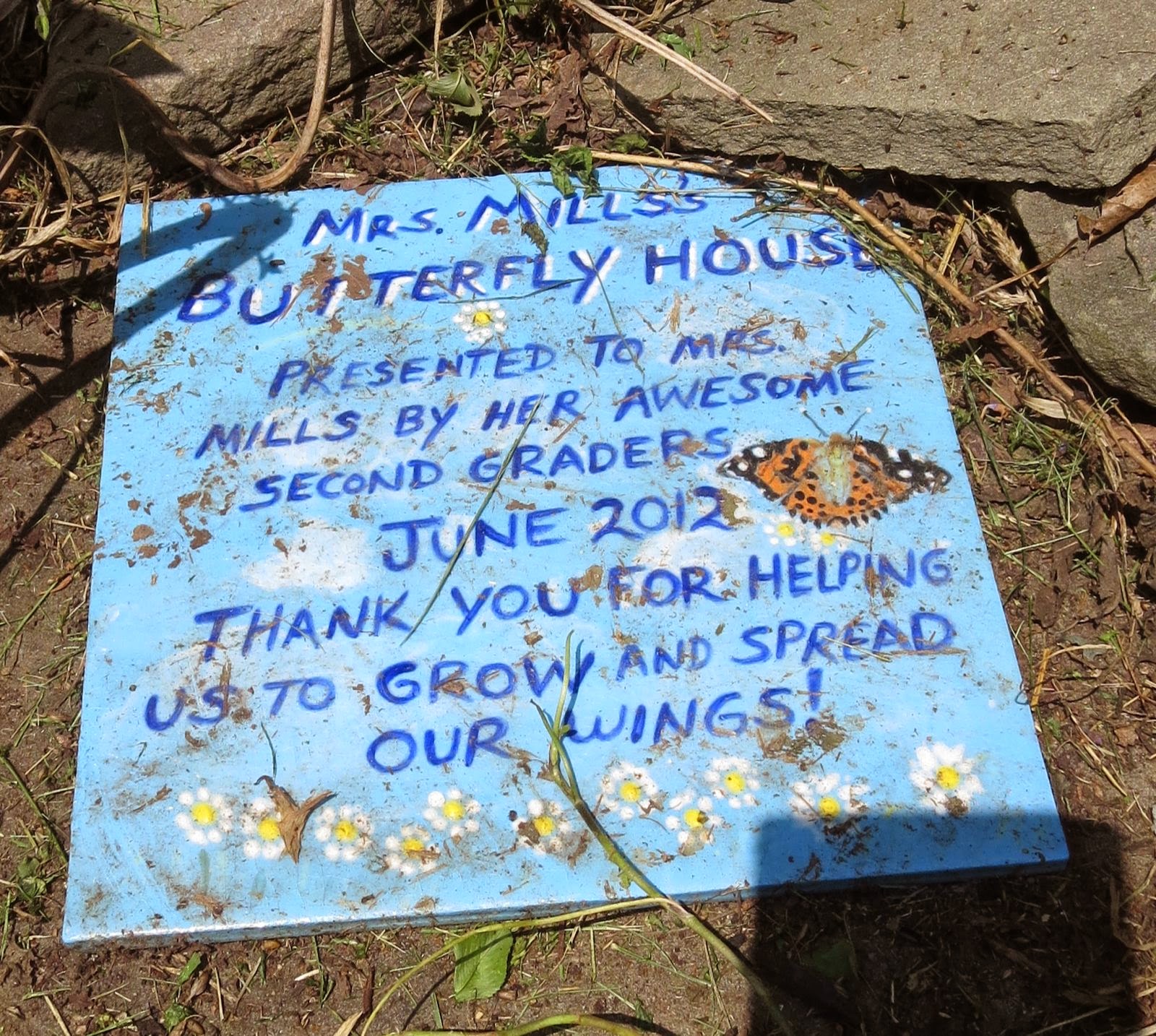 A plaque in front of a butterfly house expresses the connection between the growth of inner and outer nature.

During the school year, Rosie teaches an after school program called PrincetonYoung Achievers.

After such an inspiring morning spent with the Y kids in a landscape that is nurturing of inner and outer nature, it was time to head home, stopping by the raingarden at Spruce Circle to find it.....bulldozed! Life comes with its mixture of highs and lows.
Posted by Steve Hiltner at Saturday, September 06, 2014