In 2010, after years of planning, Harrison Street Park was planted with an ambitious array of native trees, shrubs and flower beds. The goal was admirable enough: Beautify a park that had until then been largely a static assembly of trees and grass, with little habitat and ornament. I was involved in the early stages, providing a detailed ecological assessment and stewardship plan. Princeton arborist Bob Wells contributed a tree survey pro bono. After this input of local knowledge, an outside consulting design firm based in Philadelphia, was brought in to develop plans for plantings and play equipment, with ongoing input from neighbors.

When the planting was finally done, there followed with uncanny timing a deep drought. Neighbors, having committed to caring for the plantings, put in long hours through the summer. Most of the plantings survived that first, heroic year, but then volunteer energy began to dwindle. A couple very active neighbors moved away. Borough maintenance staff couldn't take up the slack because they weren't trained to care for anything other than trees and turf. A professional weeding in 2013 salvaged some flower beds, though many of the planted species had by then been lost. 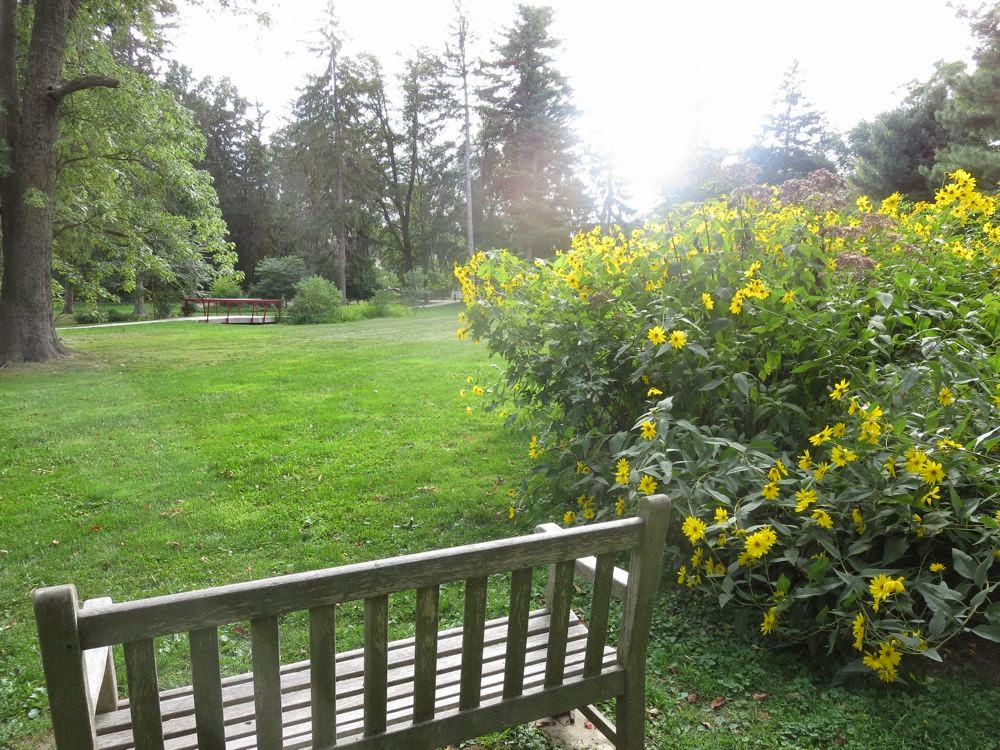 And yet, in 2014, with most of the beds a weedy tangle, two of them are flourishing. This raingarden at the edge of the field is weed-free and filled with flowers. 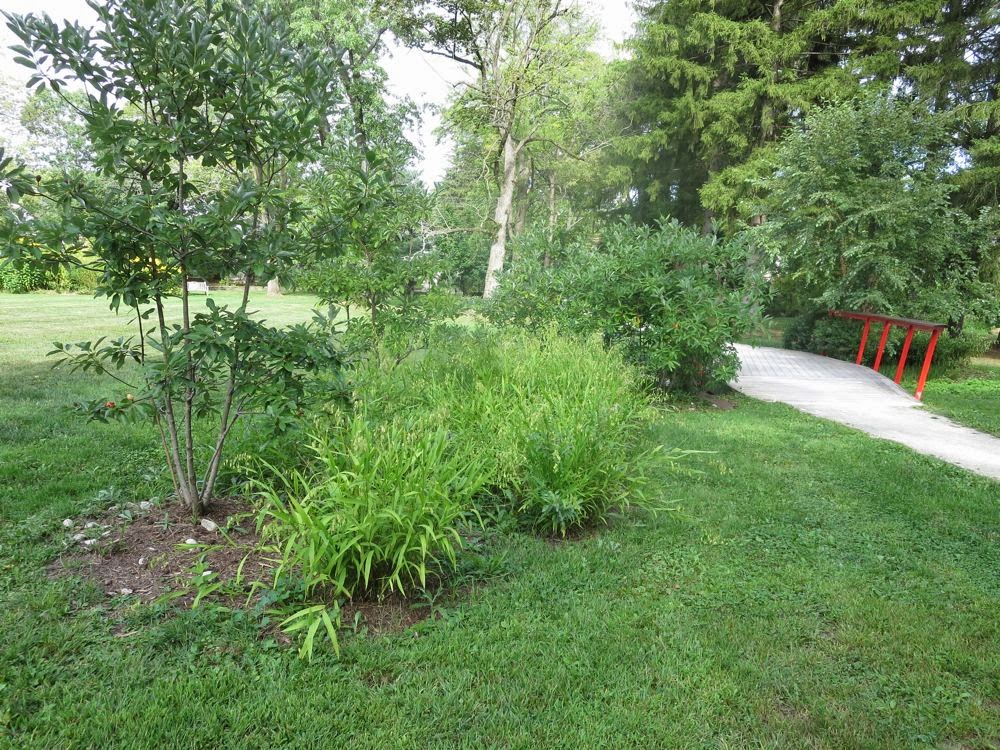 And this planting next to the bridge dedicated to borough engineer Chris Budzinski still looks good. 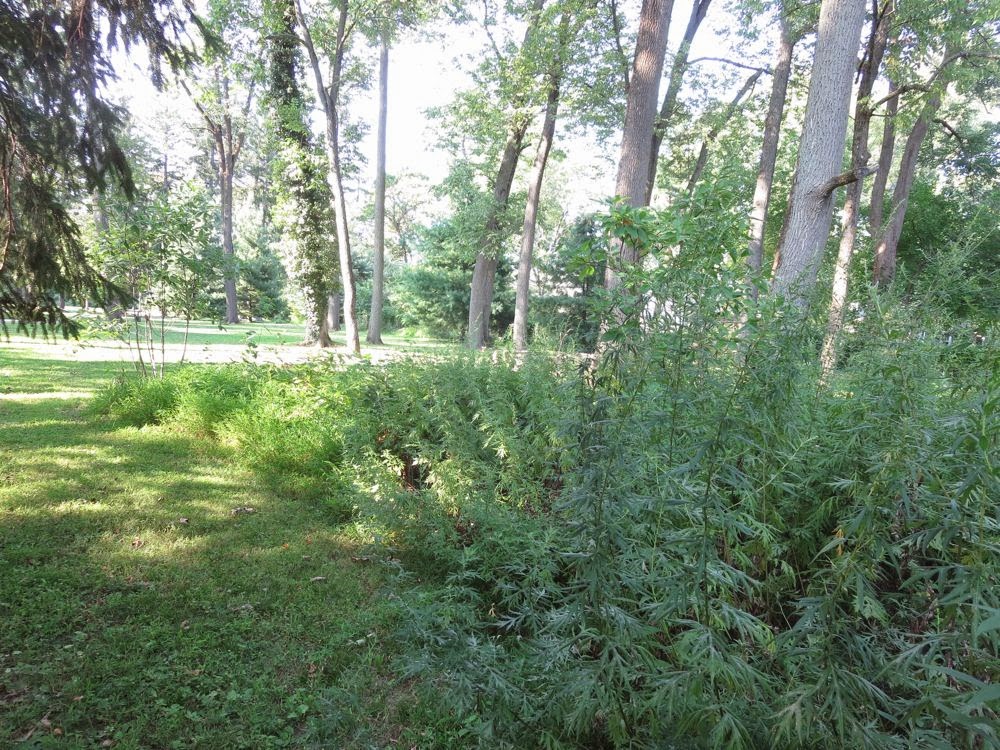 Why are they prospering while other plantings have been taken over by Canada thistle, mugwort and other aggressive weeds? The answer lies not in how much money was spent, or the beauty of a design meticulously laid out on paper. In fact, the best results were attained without cost or elaborate planning. Instead, success grew out of on-the-ground experience and long observation of how rainwater flows in the park. That flow, whether natural or manipulated to advantage, determined which gardens survived and which ones burned out volunteers by growing abundant weeds. 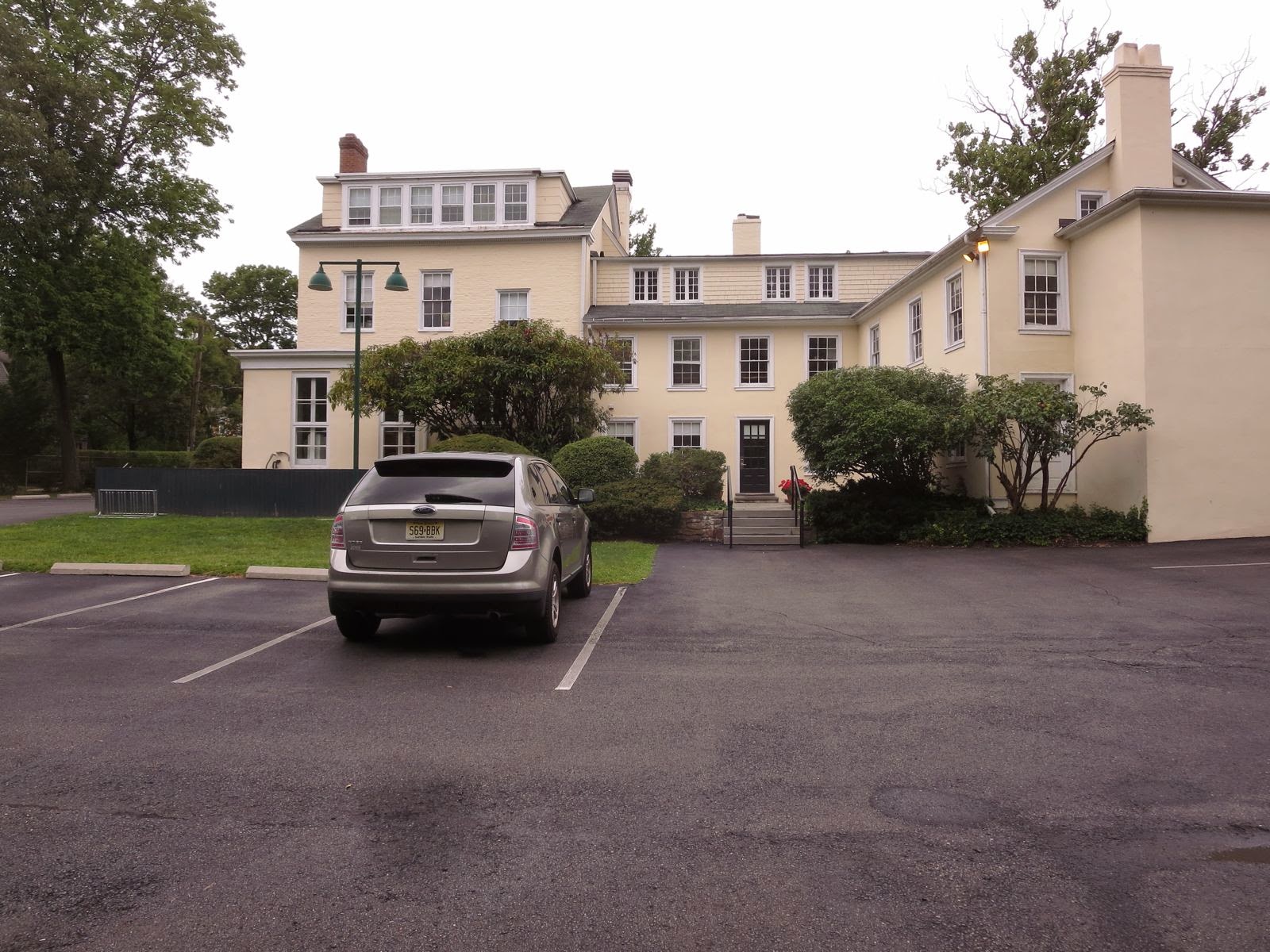 When I began my analysis of the park, I began here, in the parking lot for a prominent architect's offices. You can see how this parking lot matters if you turn 180 degrees, 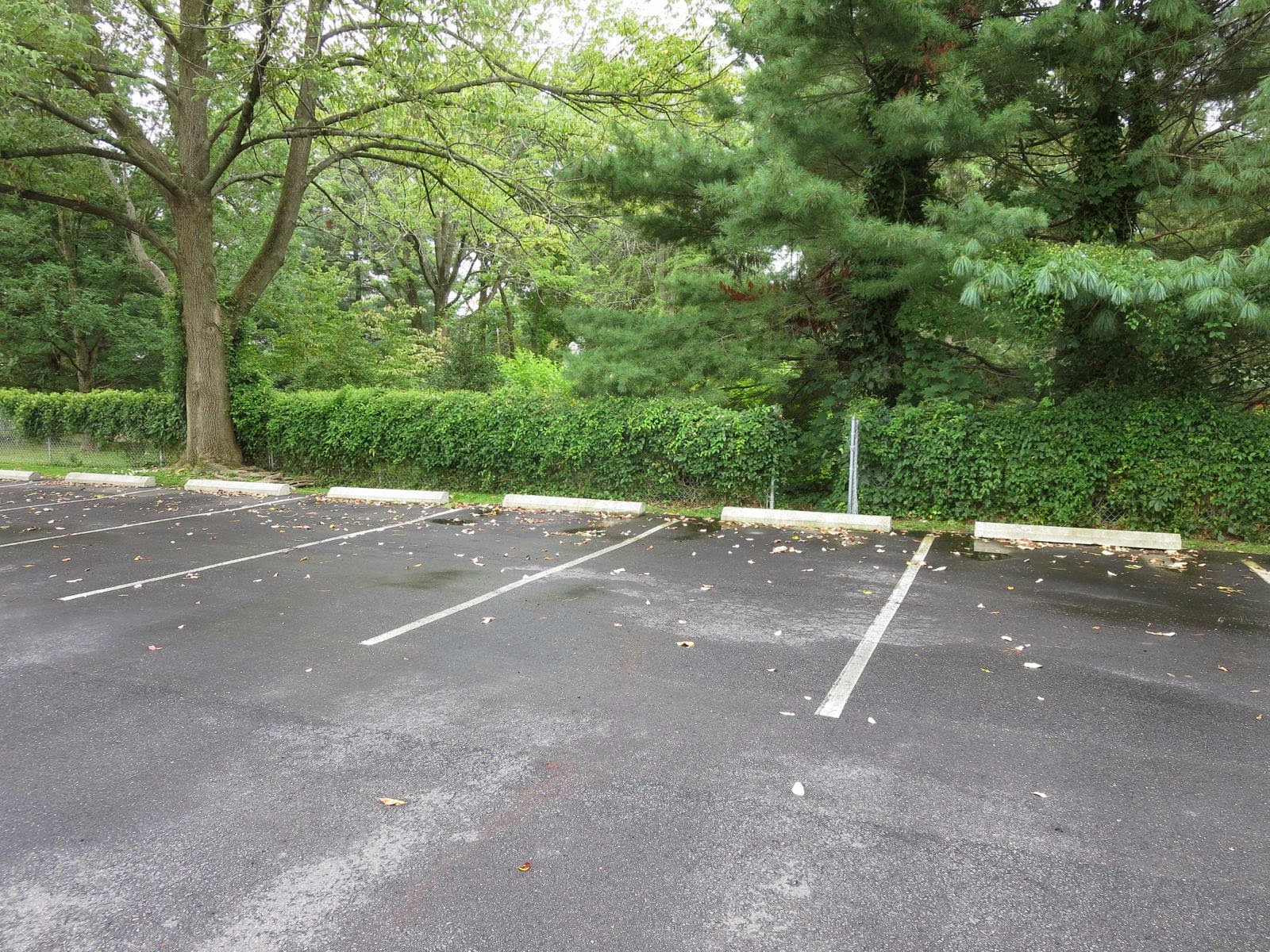 and look downhill towards where all the storm runoff from the asphalt flows into the park. This water is so important that, when they repaved the lot a year or two ago, I checked to make sure they didn't add curb and gutter to divert the water into a storm drain. 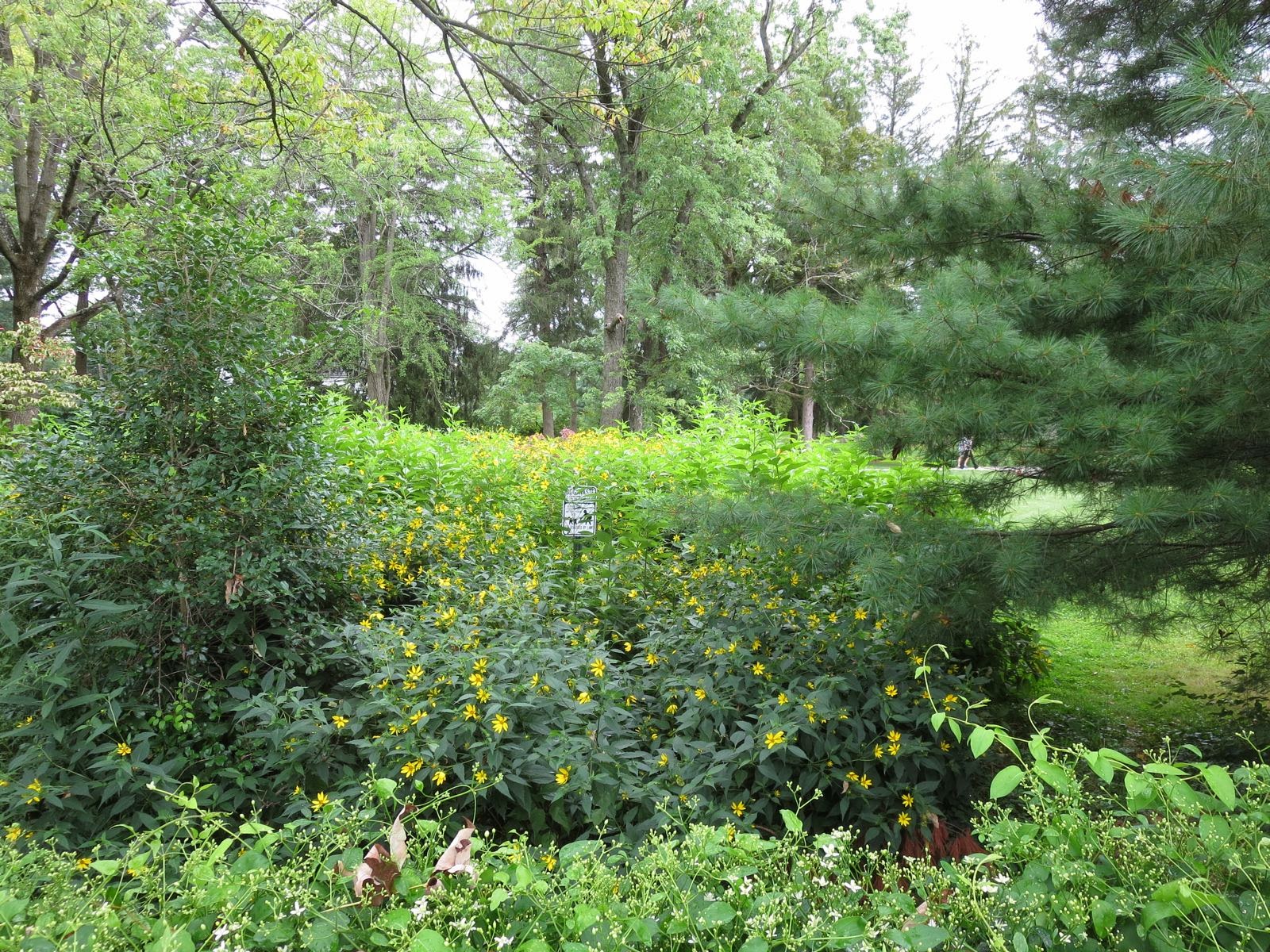 Why? Because just beyond the fence is a raingarden that I and other neighbors helped Clifford Zink to plant. 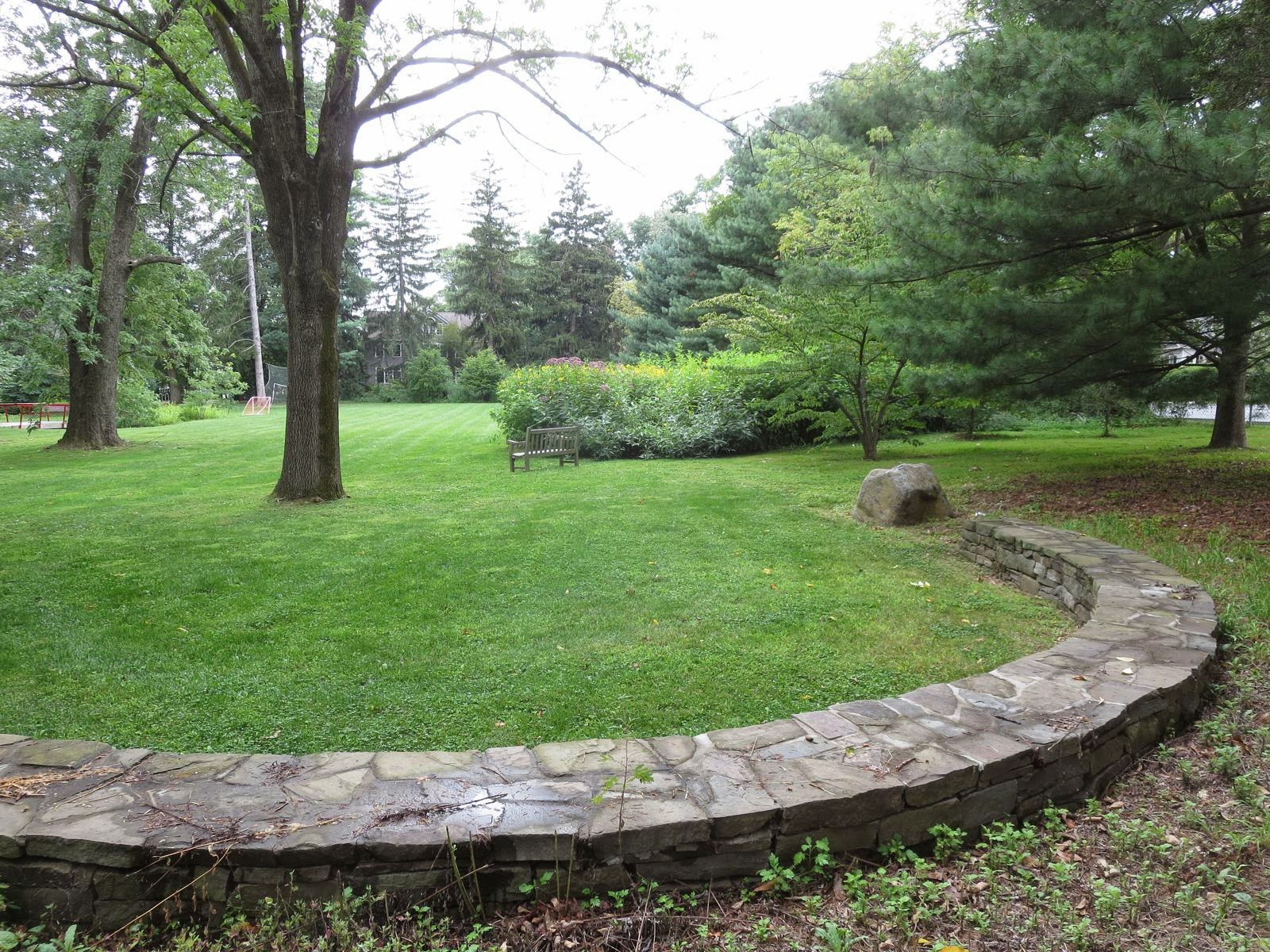 In the park's large expanse of grass, the garden (back right) was planted not just anywhere, but strategically located in a sunny swale that receives the runoff from the parking lot. 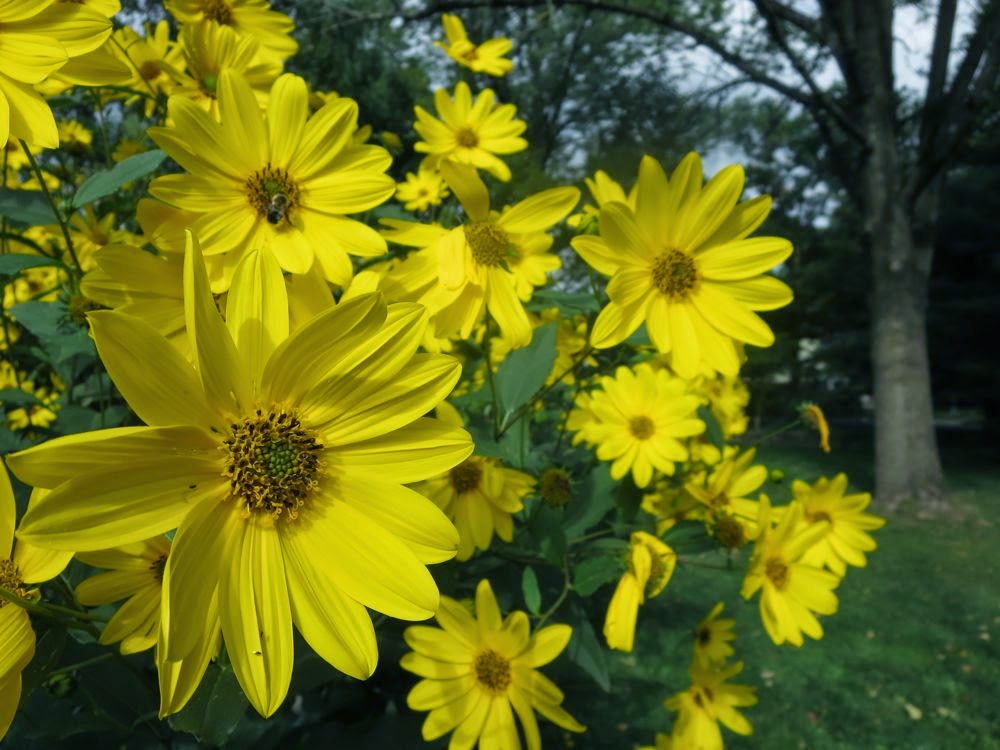 The periodic infusion of water creates an underground reservoir of moisture. Powered by adequate sunlight and fed by the stable water supply, the native plants prosper. What few weeds manage to survive the competition can be easily pulled from the soft ground. Now, it might have been better if we hadn't planted sunflower species that spread underground and have been steadily displacing the less aggressive swamp milkweed, hibiscus and even joe-pye-weed. But the result is still attractive and very easy to maintain. A well-timed hour or two with a few volunteers pulling out some of the sunflower stems next spring would restore balance. It's worth noting that this successful garden, planted by volunteers at no cost to the borough, was actually slated to be removed by the landscape design firm, which failed to understand its logic and value. Neighbors had to rally to make sure it was not removed.

Of the garden beds added by the design firm, only one has proven relatively easy to maintain, due to it also having been planted in a swale, where wet, sunny conditions favor the natives and make weeding easier. 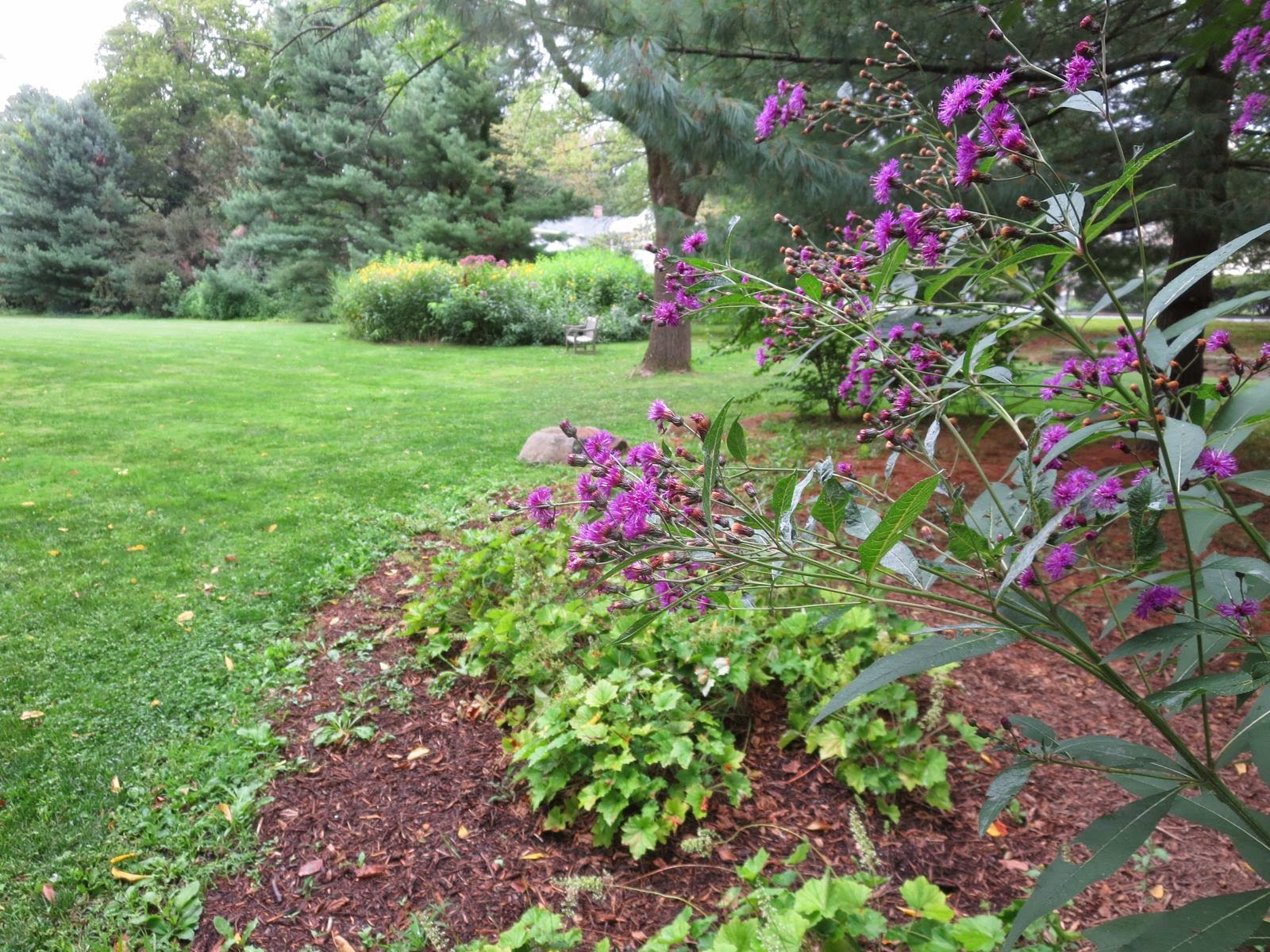 This shadier planting might have done well with consistent care, but long periods of neglect allowed garlic mustard and Canada thistle to take hold. Apparently worked on this year by parks staff led by someone knowledgeable about plants, it still contained enough of the original foamflower and ironweed to be attractive.

There were other locations in the park with the combination of wet and sunny conditions that favor native wildflower plantings, but these spots were instead planted with trees that cut off sunlight, or raised up in a way that shunned the periodic infusions of runoff that could have keyed their survival. The flower bed in this photo, shaded and raised up on a berm, must have looked good on paper and when freshly planted, but offered none of the sun and natural water needed for the natives to compete with weeds. These berms, hazardous to mow, can't even revert to lawn as most failed gardens do.

So, what's the verdict on Harrison Street Park's grand experiment in planting and caring for naturalistic flower beds? 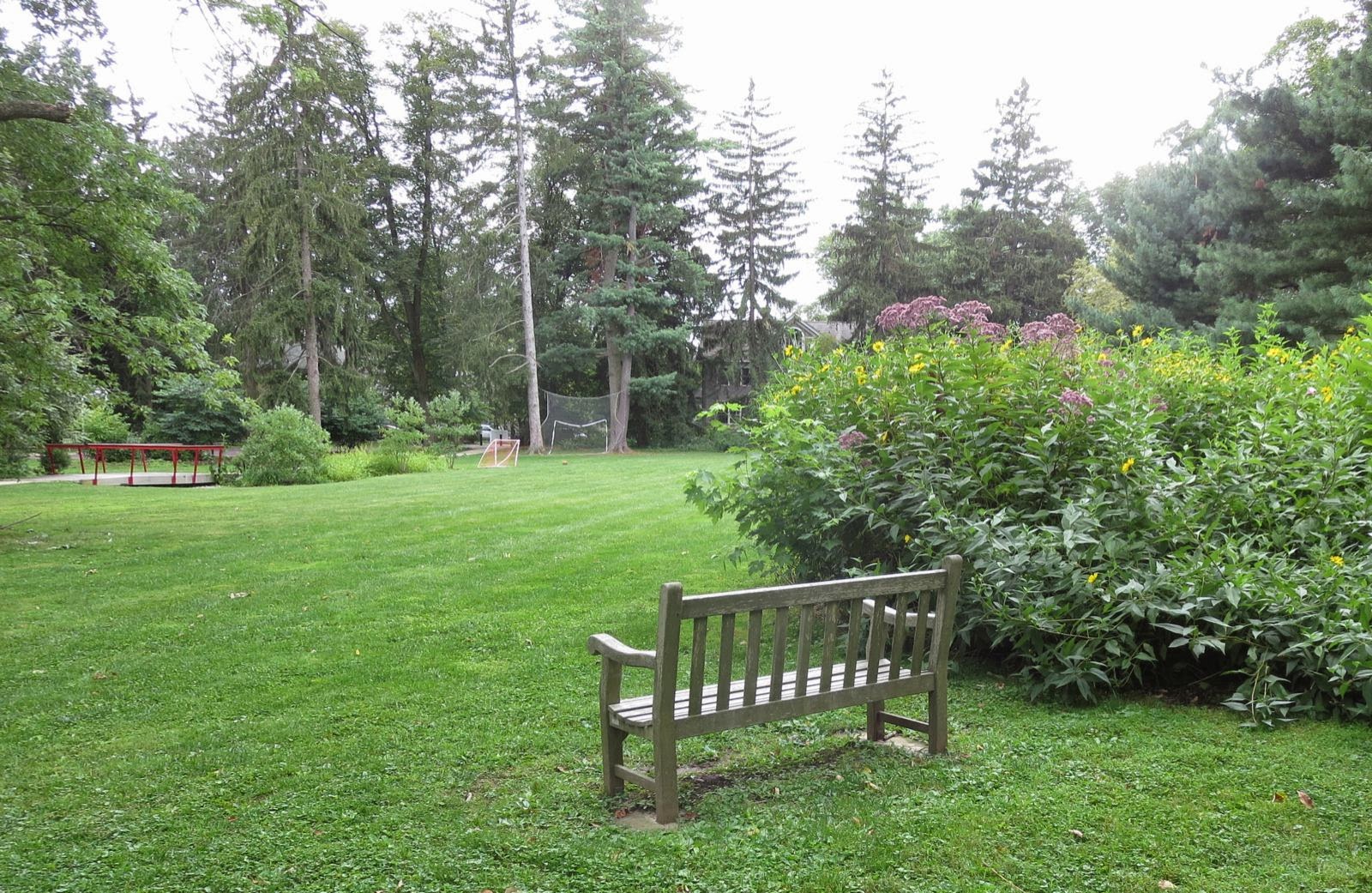 This photo captures what has worked well in the park: two rain gardens and the sports field intentionally given a slight crest to shed water. These successes, whether designed to receive runoff or shed it, depended on close attention to "where the water goes."
Posted by Steve Hiltner at Saturday, September 27, 2014