Update, August 2019: Someone who goes by the name Beatriz Moisset was nice enough to identify some of the insects below that I found on the boneset flowers in my backyard. I have integrated her ID's into the text.

If it's early September, it must be time to write about what I did with my summer. In August, I traveled once again to the land called Boneset. What I saw there will open the minds of anyone who thinks flowers are only visited by honey bees and butterflies. In the land of Boneset, which happens to be at a perfect height for photographing, miniature acres of tiny white flowers attract all sorts of wonderfully strange creatures whose names are on the tips of very few tongues. Some six-legged visitors are interested in what the flowers have to offer. Others, often with eight legs, lay in wait, using the flowers as bait to attract their next meal. Some linger for days, others patrol without landing. Others are said to leave their scents, then check back later to see if the scent has attracted a potential mate. Some arrive in sufficient numbers to look like herds of insects grazing in a field of brilliant white. Others multi-task by continuing to feed on the nectar while they mate.

Here is the first wave of photos from my travels. Say the magic words, "Eupatorium perfoliatum", plant one or many in your backyard, and you too can travel to this unsuspected world. 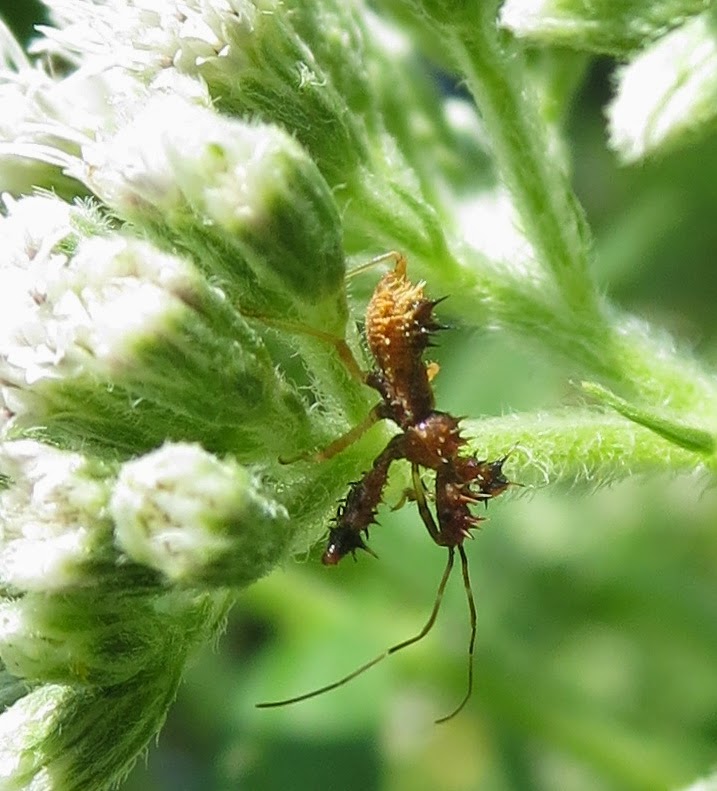 #1) There's a tiny, spiny creature reminiscent of a lobster, 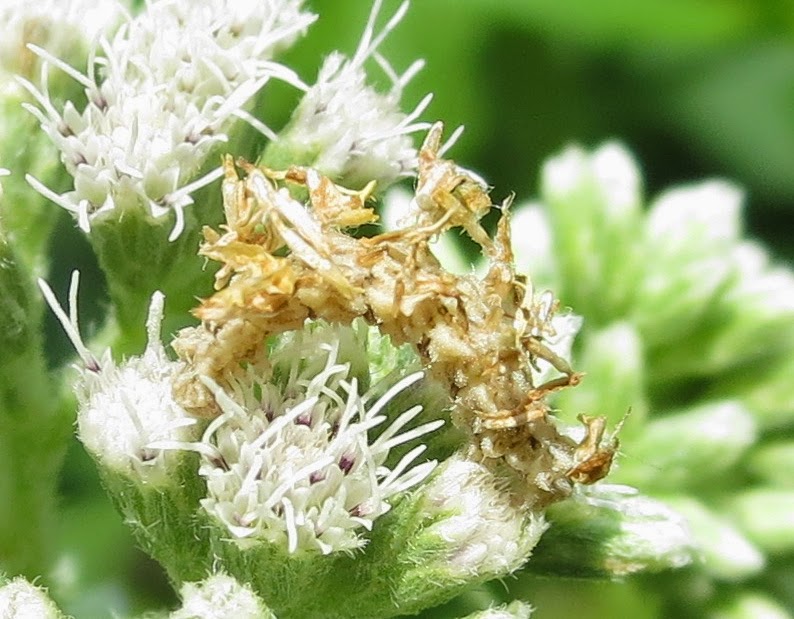 #2) and the inchworm mentioned in a previous post that includes what some might call a spellbinding video of it doing its inchworm walk. 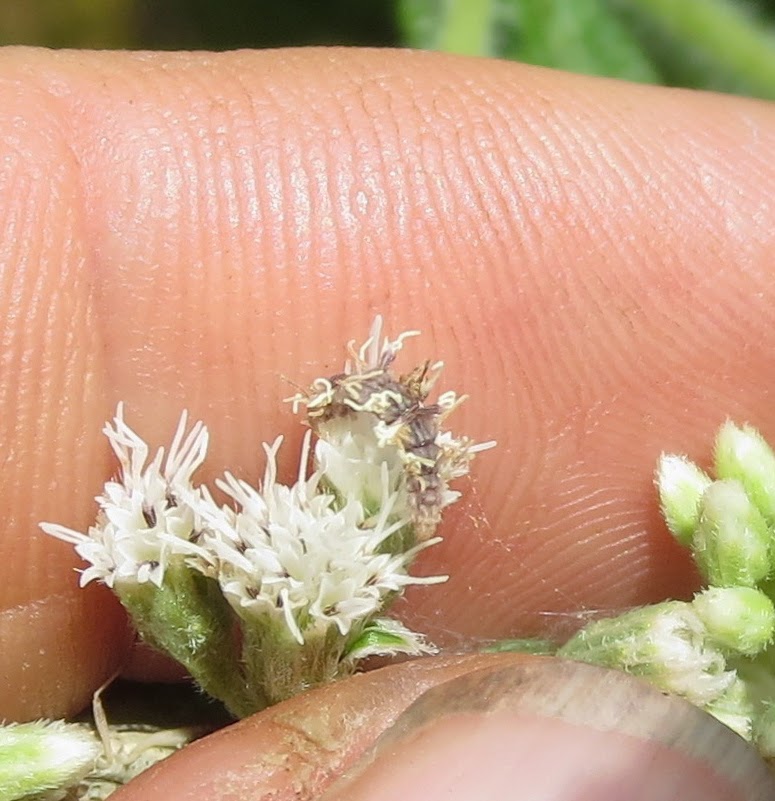 #2a) Is this the same inchworm (camouflaged looper), but tinier and wearing a slightly different camouflage? I'm glad you asked because I have absolutely no idea. I can tell by the markings, however, that the forefinger in the background is definitely mine. 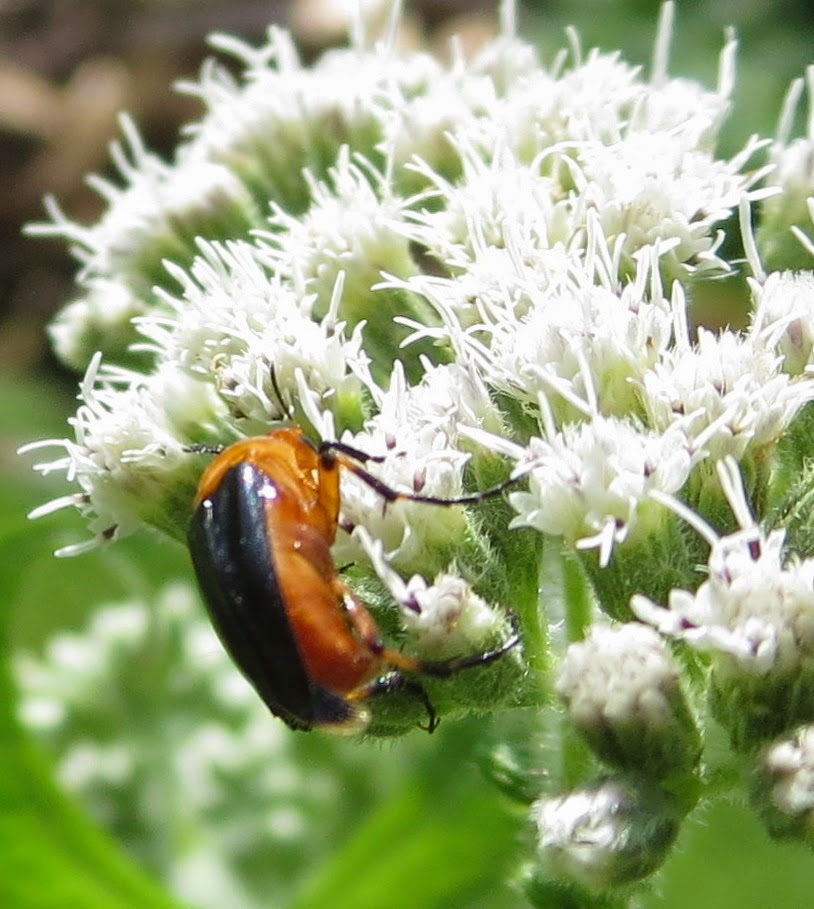 #3) And this chunky fellow wearing orange and black. What year's Princeton alumni coat is that? Class of 2 million B.C., perhaps.

Okay, I really should be giving these insects their real names. All in the fullness of time. Many likely don't have decent common names. We'll need to have a contest.

Again, our commenter to the rescue: "a wedge-shaped beetle, looking for bees to parasitize their nests."
The link says it's in the family Ripiphoridae, lays its eggs on the flowers. The eggs hatch, and the larvae hitch a ride on a bee or wasp, then does its parasitizing back at the host's nest. All sorts of mischief going on here, on these pretty little flowers. 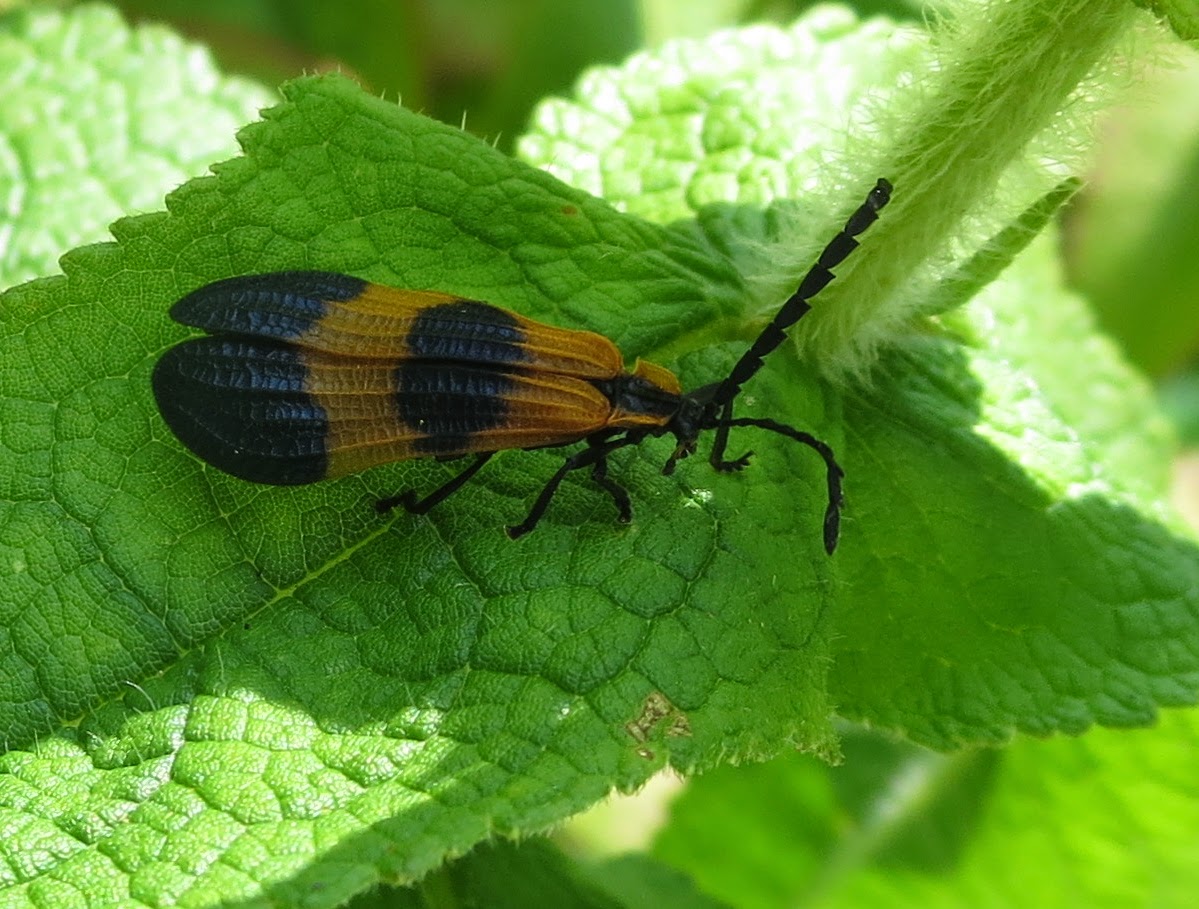 Our commenter says it's a net-winged beetle. The genus is Calopteron in the family Lycidae. Its larvae feed on insects and other arthropods under bark. So, I guess it can be considered a biocontrol,

The adult's "aposematic" colors warn potential predators that they are poisonous. They lay their eggs under the bark of dead or dying trees, and the larvae eat other insects there. In other words, they participate in the food chain that is part of the long afterlife of dead trees. 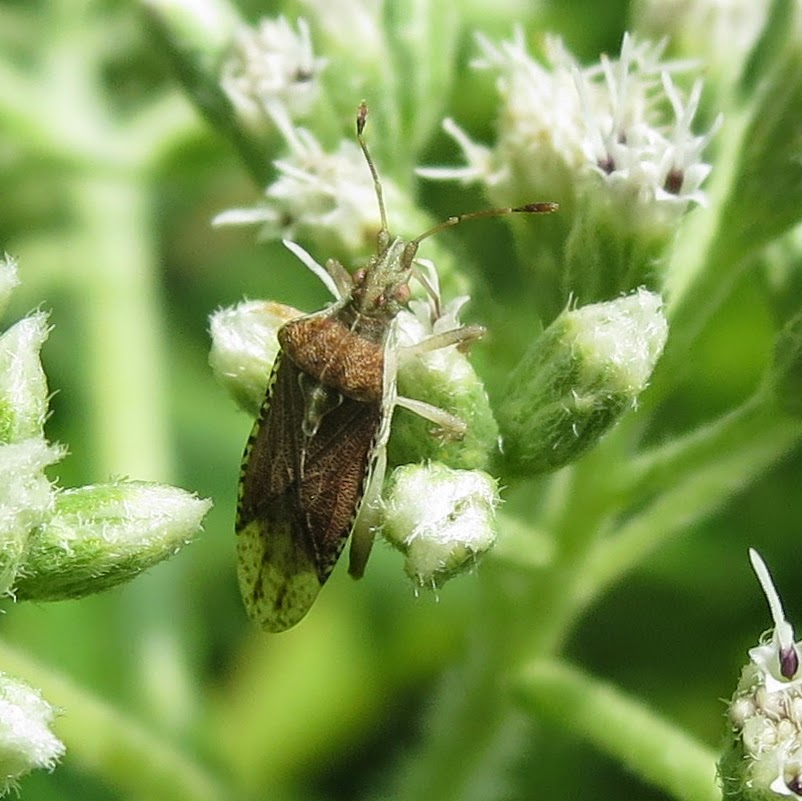 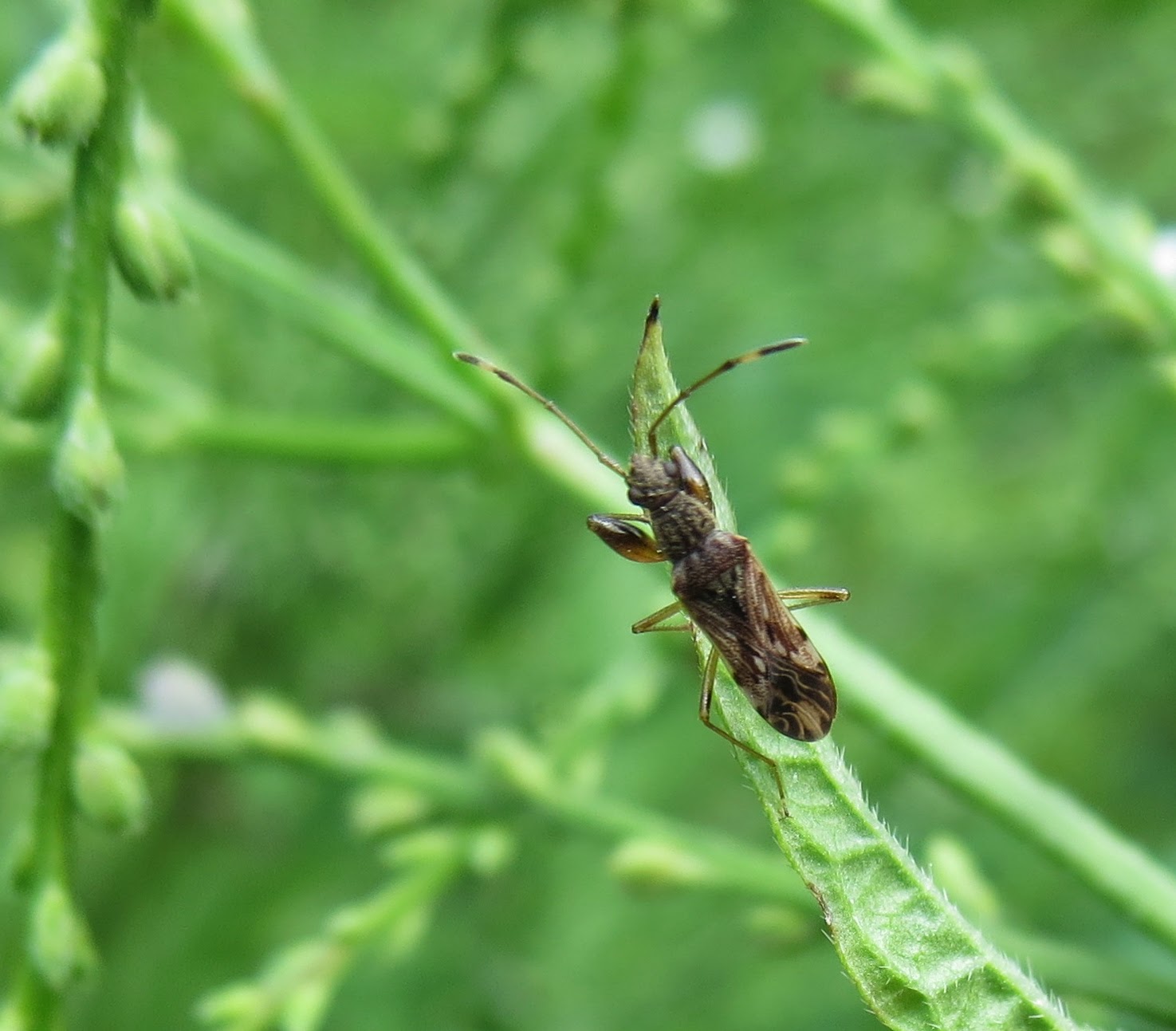 #6) This one looks a lot like the previous one, but it's skinnier and appears to have swollen, clawlike legs in front. 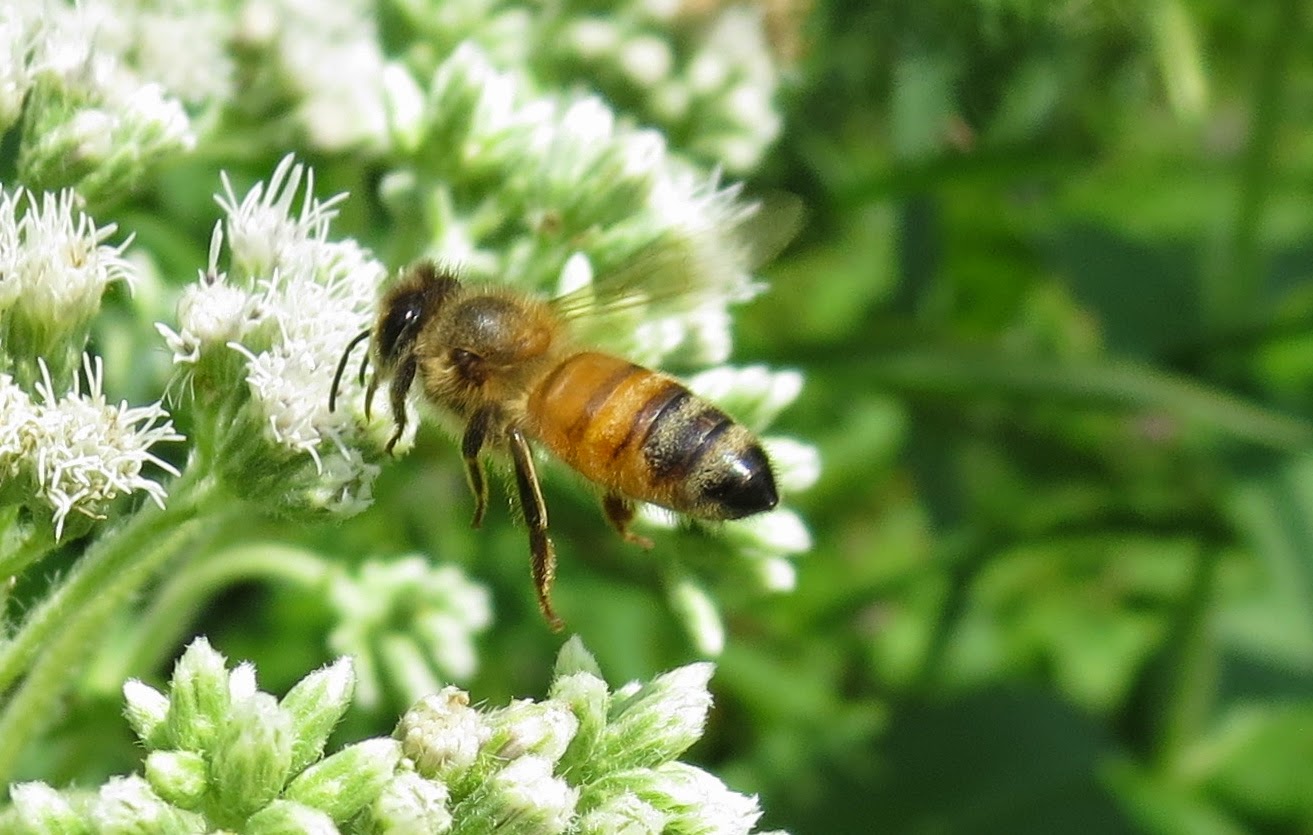 #7) Finally, something familiar: A honey bee, which is what most people associate with flowers. And wouldn't you know it? That's the one that happens not to be native to America. #8) For these nondescript black bees, my classification for the time being is small, smaller, tiny, and miniscule. The slogan for this blog post is "Miniscule is cool." 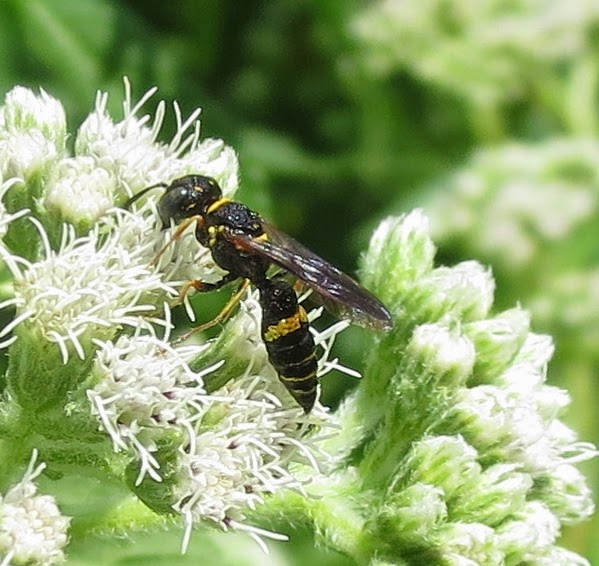 #9) The pattern of stripes on the abdomen has GOT to be a clue.

Note: A commenter says this is a "bee wolf" (Philanthus gibbosus)--a wasp that preys on bees to feed its young. 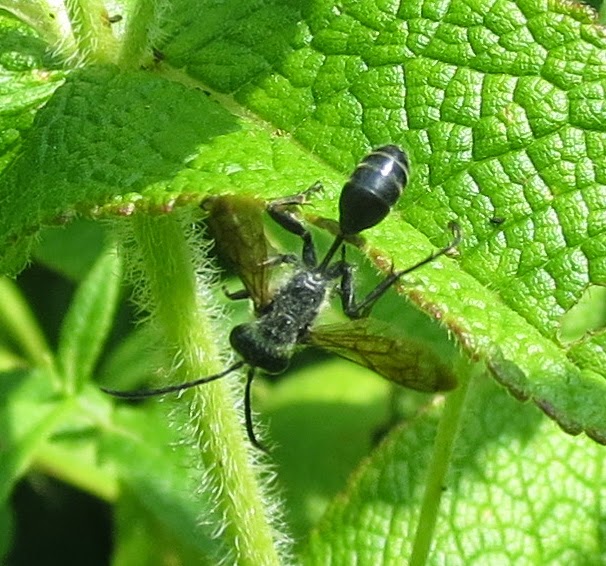 #10, 11) This photo and the next may be of the same kind of black wasp, but the first one looks hairier on the thorax. 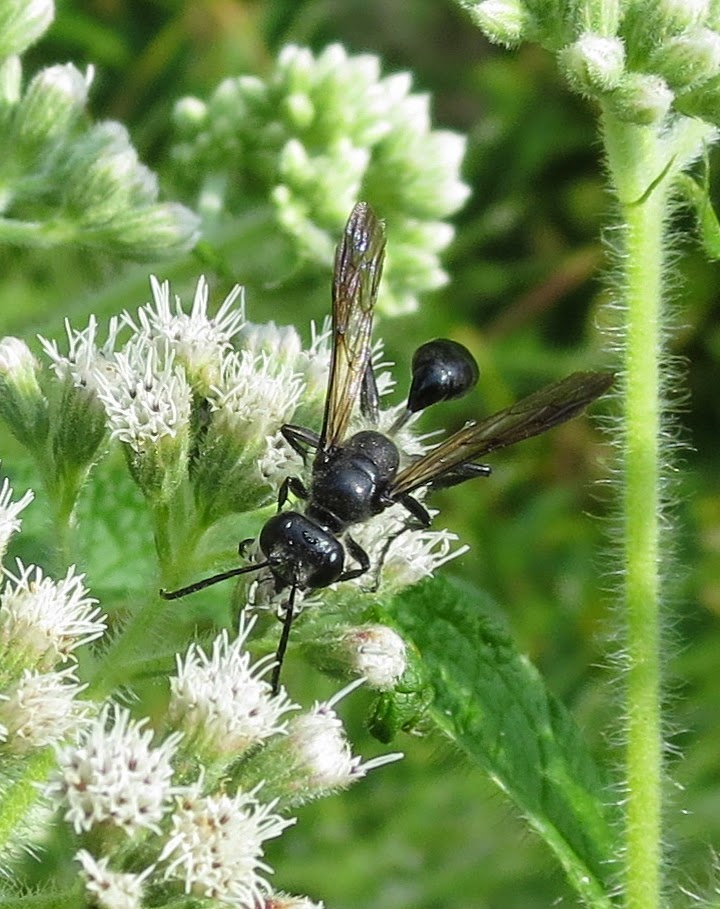 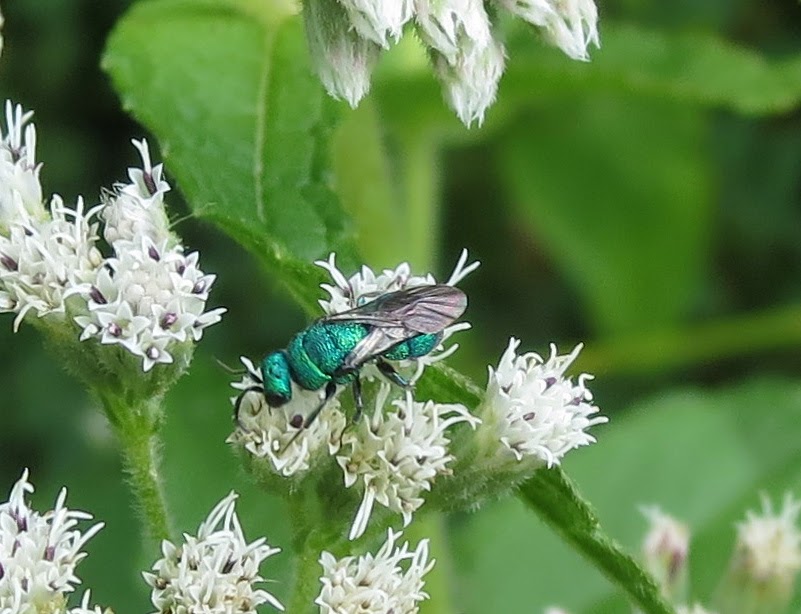 #12) Here's a sweat bee, which rhymes with Halictidae. With a name like that, it must be attracted to sweat, or at least the salt in the sweat. Does boneset sweat? It sweats nectar.

Note: a commenter says it's a cuckoo wasp, in the Chrysididae. Like the cuckoo bird, it's a parasite that lays its eggs in the nest of other species. 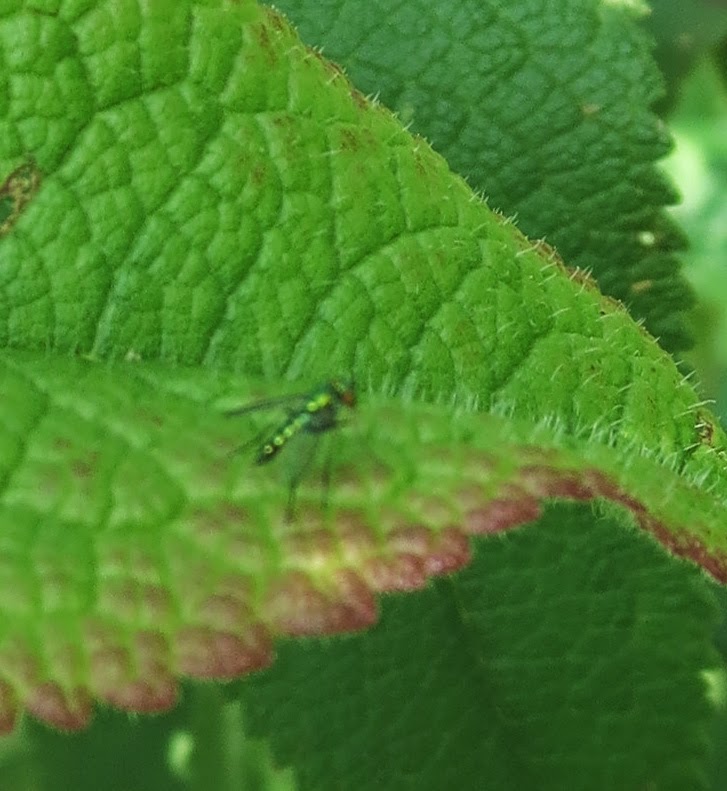 Note: Our very helpful commenter says this is a long-legged fly in the Dolichopodidae family. They are said to have elaborate mating behavior, during which the male displays its long legs for the female. 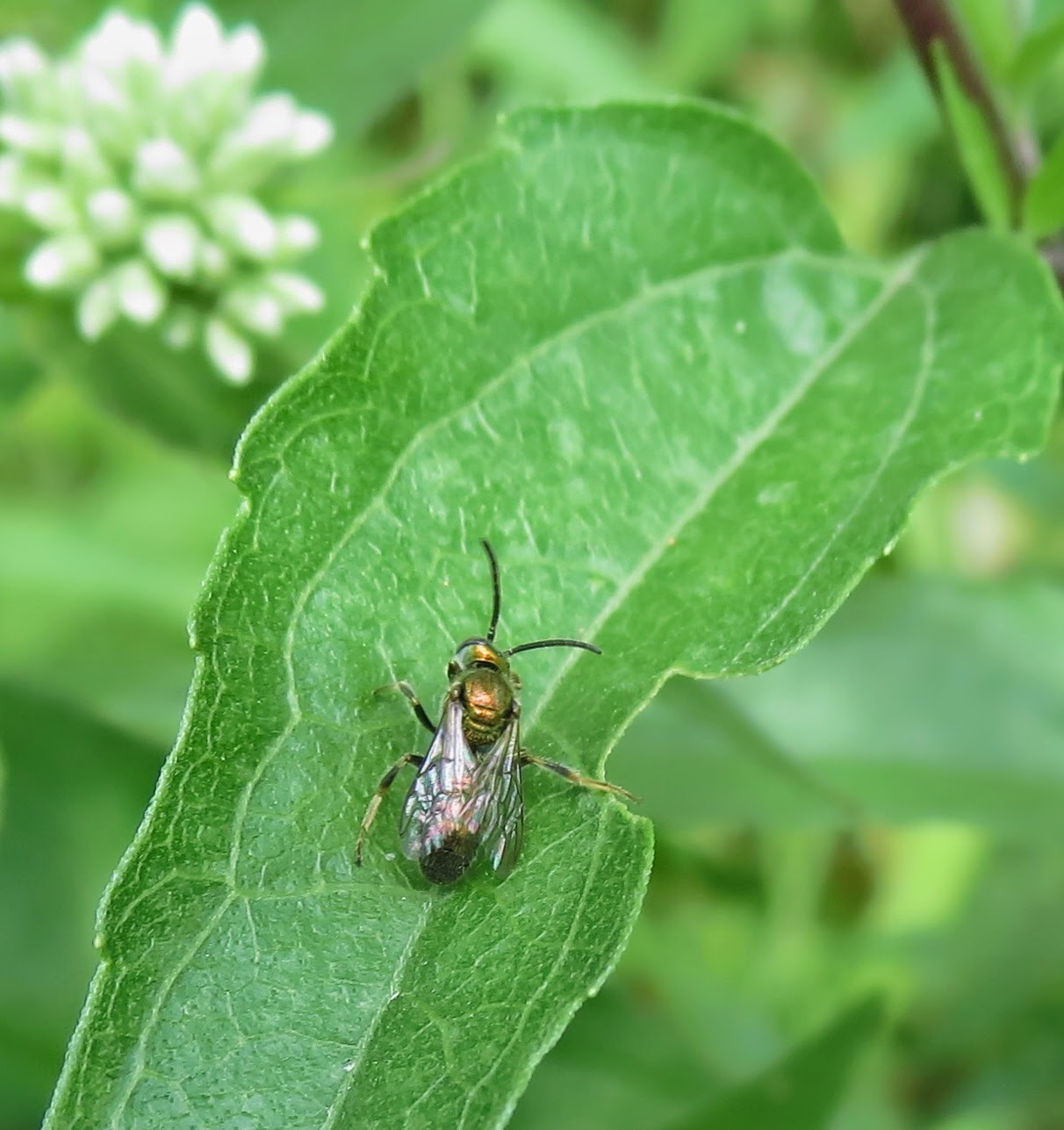 How much sweat could a boneset sweat if a boneset could sweat sweat? 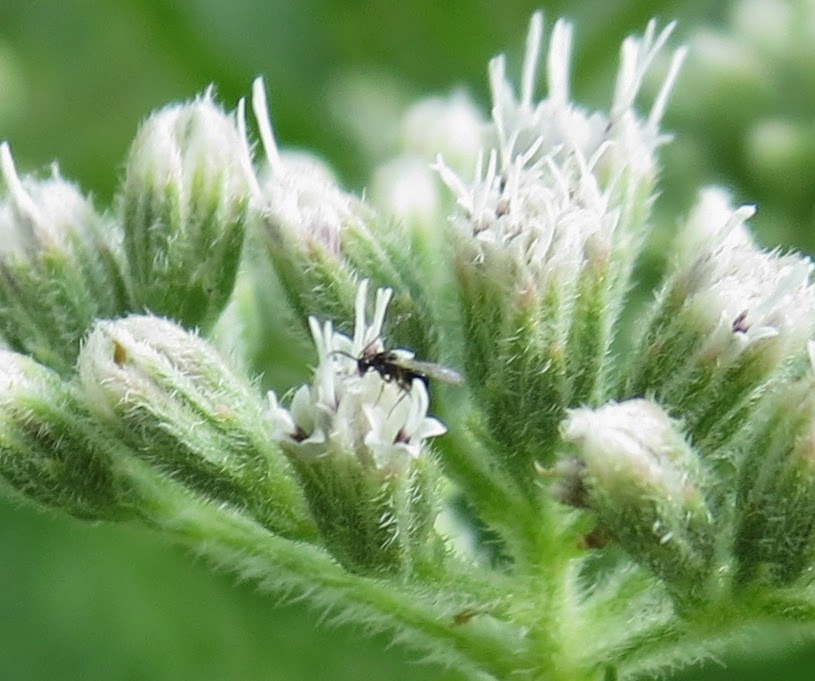 Note: Our commenter says it "looks like a parasitic wasp. Great biocontrol!" 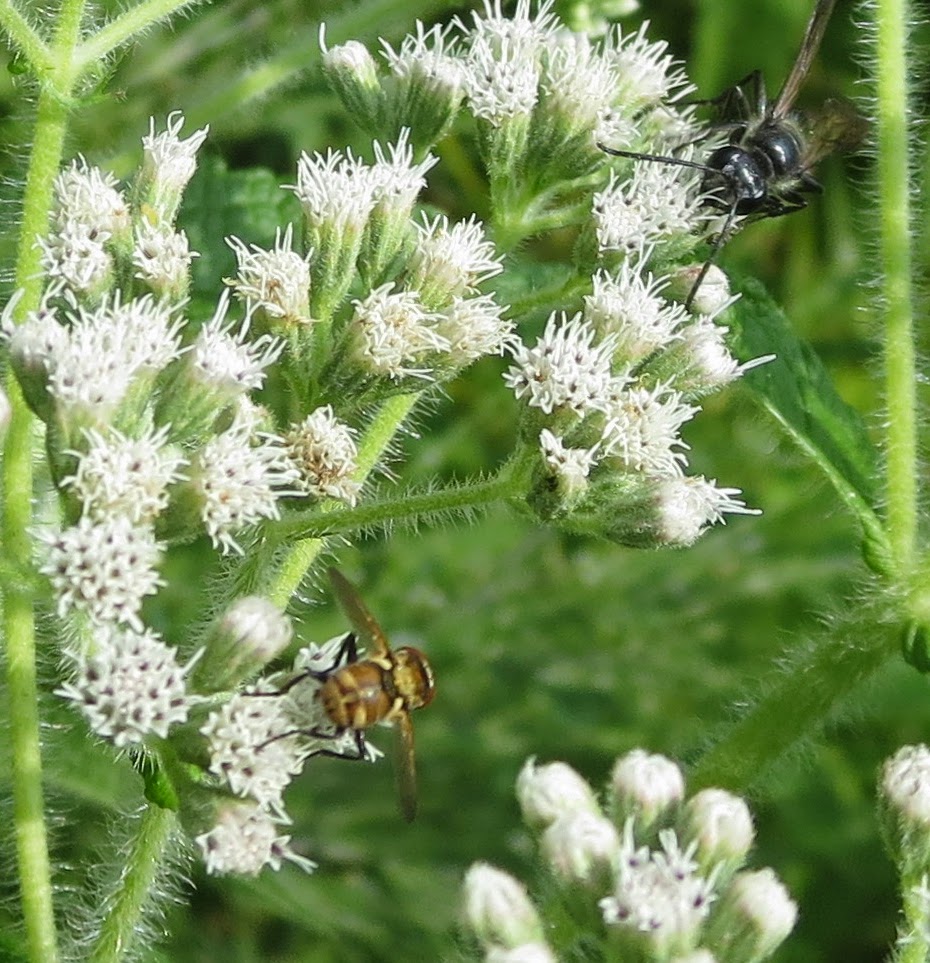 #16) There, down in the lower left, something brown that looks like a fly, but its wings stick straight out to the sides.

Note: our commenter says it "looks like a Tachinid fly, difficult angle. looks like this one http://bugguide.net/node/view/300648"
(Tachinids can help control insect pests in gardens, by laying eggs on them that hatch and then consume the pest. At this link you can scroll down to see the Tachinid's eggs on the host insect.) 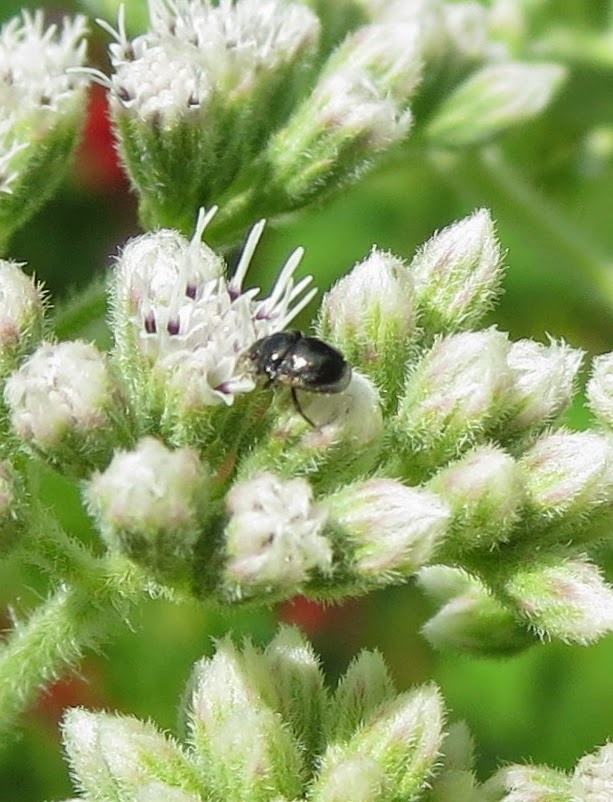 #17) This little fellow, oval and black, reminds me of a small, tank-like insect that was attracted to the salad when we ate dinner outside when I was a kid in Wisconsin. Maybe if we had planted more boneset, they would have stayed out of the salad.

There you have it. I counted 17 that are plausibly different species. And that's just on a sunny afternoon on August 7, with the boneset just starting to open up in a backyard behind a house on a busy street in Princeton, NJ. This "What I did with my summer" essay is starting to look like the first chapter of Boneset Days, or the soap opera As the Boneset Blooms, with a cast of characters that may grow to rival a Russian novel.
Posted by Steve Hiltner at Sunday, September 14, 2014