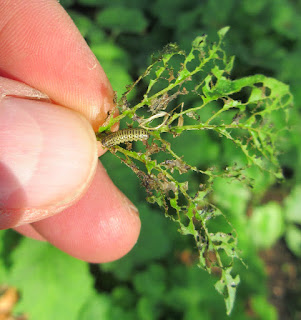 During an otherwise very positive weeding session in Harrison Street Park, I spotted a small Viburnum shrub that appeared to be a ghost of its former self. Every last leaf had been skeletonized. As I took a closer look, I was afraid of what I might find. Native to Europe, the Viburnum Leaf Beetle was transported to our continent and has been spreading across the eastern U.S., decimating native and exotic Viburnums as it goes. 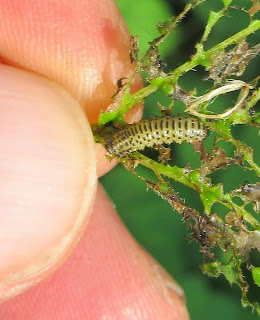 This closeup corresponds with what can be found on the web. As far as I know, and I'll check with the extension service, this is the first documented occurrence in Mercer County. (Update, May 20: I called today, and they are in the process of confirming a sighting in Pennington.) The map on the NJ Invasive Species Strike Team website shows documented occurrences in other areas of NJ. My first encounter with it was some five years ago in a park in Pittsburgh, where a grove of arrowwood Viburnums (V. dentatum) had been transformed by the insect from robust green to brown ooze. 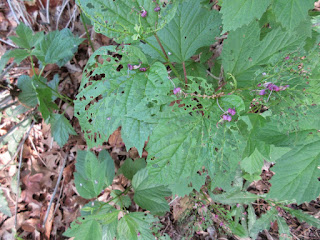 The only good news is that only two Viburnum shrubs in Harrison Street Park had been visually affected. This photo shows the early stages of attack. I tried to kill every last larva I could find.

Chances are, this is not the only infestation in Princeton. Homeowners should check any Viburnums in their yards for signs of damage. Some suggestions for control can be found at this link. Not all Viburnums are equally vulnerable, as this Cornell University list shows. Among our three most common native species, arrowwood Viburnum (V. dentatum) is the most vulnerable, followed by mapleleaf Viburnum (V. acerifolium), with blackhaw Viburnum (V. prunifolium) being the most resistant. Arrowwood Viburnum is generally found in low-lying woodlands. Mapleleaf Viburnum is a small shrub, rarely encountered except along the ridge. The blackhaw Viburnum is the largest and most common native Viburnum in Princeton. A Penn State website suggests that the insect prefers Viburnum species with less pubescence on the leaves.

Most people have heard of Emerald Ash Borer by now, which was spotted for the first time in Mercer County last year. One ecological consequence of losing most of our ash trees over the next ten years is that more sunlight will then reach the understory, which is dominated by non-native shrubs like honeysuckle, privet, asian Photinia and winged Euonymus. Viburnums are a main component of the native understory. If they are severely weakened by Viburnum leaf beetle, then they'll be even less able to compete with exotics for that additional sunlight. A recent presentation by entomologist Douglas Tallamy in Princeton offered evidence that not only is the foliage of native plant species necessary for the survival of countless species of insects, but their berries are much more nutritious for birds. How we are to keep foodchains intact in our forests is something of a question. 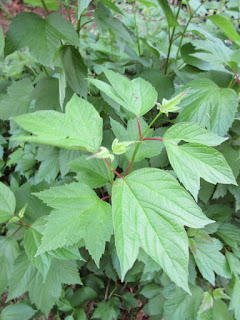 In addition to being vigilant and acting quickly if an infestation is found, one thing to do is take a moment to appreciate the Viburnums and ashes we have--the play of light on their leaves, the colors they turn in fall. In a largely unregulated world where powerful forces of change continue to be unleashed, there's a heightened poignancy in what we all too often take for granted.