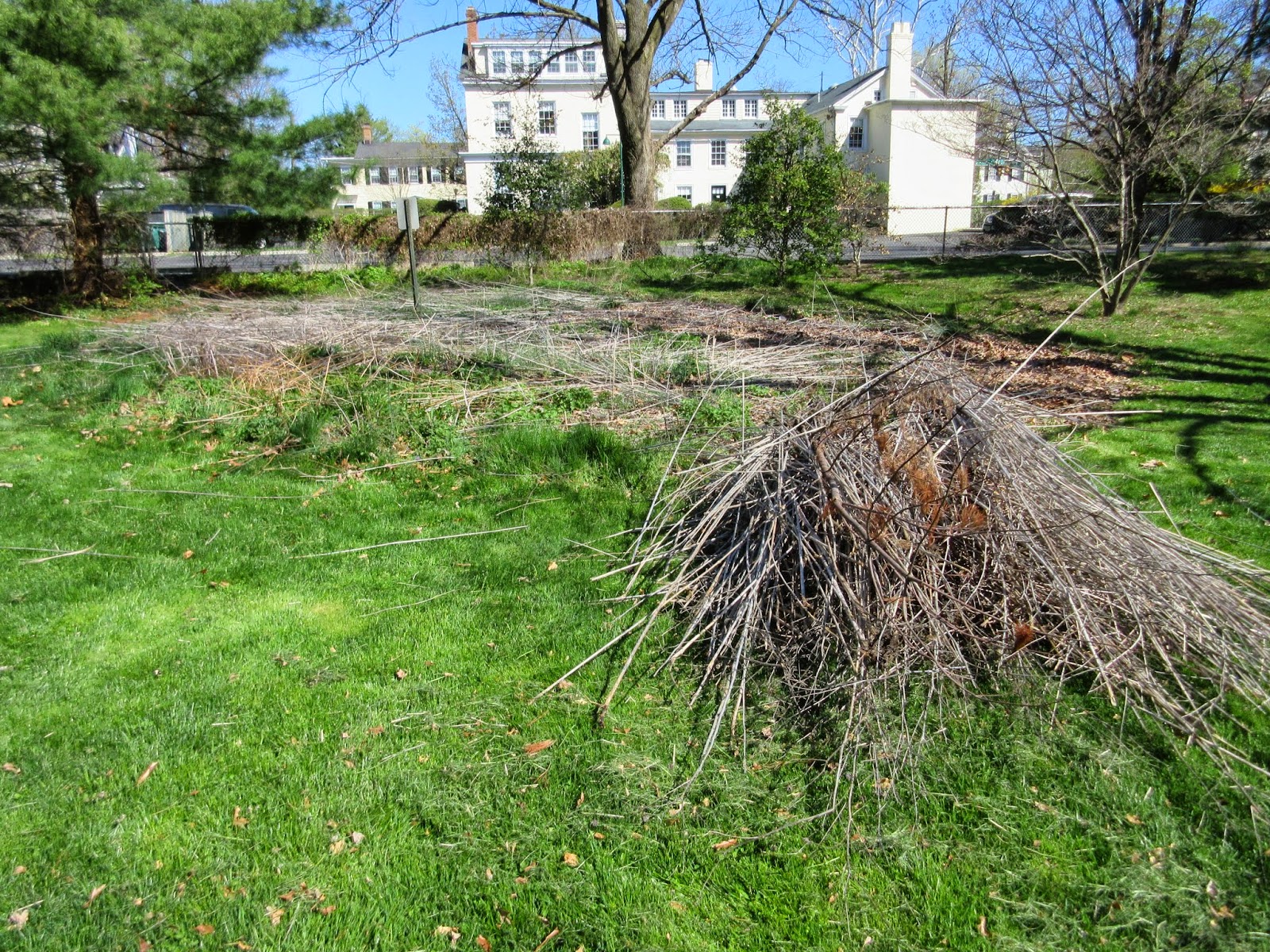 On the fringe of a town park, during an hour on the fringe of our day, Clifford and I prepared a public garden for the summer to come. It competes, like all to-do's on the fringes of our lives, with countless other priorties, yet it's a garden we planted together, and we're the ones who know how to take care of it. And besides, spring cleaning gives us a chance to catch up on each other's lives.

It's easy to like a garden when it's full of flowers, but now, when glimmers of green are just emerging through the spent remains of last year's glory, is when a garden's prospects for the year are determined. A "swale garden" like this one--not really a raingarden because it doesn't hold any water back--has a lot going for it. Benefitting as it does from abundant sunlight and the runoff from a parking lot, spring cleanup is easy. Knock down the old stalks, pile them up, that's it. We could have left the pile for a parks crew to haul away, 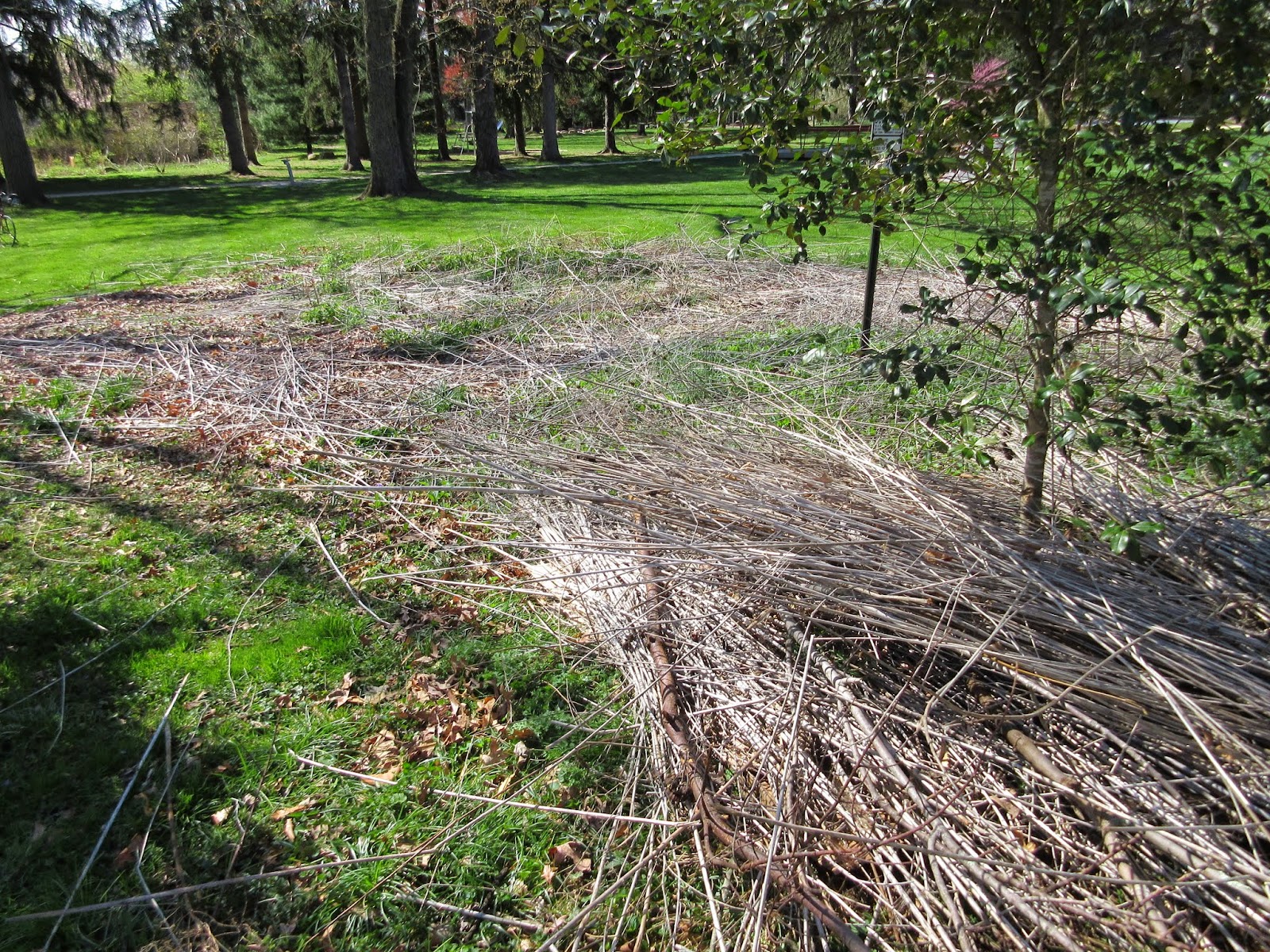 but then I noticed some mugwort starting to get established near the back fenceline, and decided to put them to use. Overlapping pieces of cardboard were placed over the mugwort, topped by the dead stalks of spent sunflowers. Less work for the parks crew, less mugwort, which has overgrown some of the other, less robust plantings in the park. Win-wins are important when time is scarce. The sticks may look a little untidy right now, but they'll quickly disappear beneath new growth, and will help cool the soil and retain moisture during the summer months.

Though the garden looks drab and static, a gardener can see the forces at work. In this springtime still-life, life is anything but still. Like schoolchildren on a slow-motion flowerbed playground, each plant species has its own personality. Some "play well with others", content to stay where they're planted. Some are bullies, grabbing space and sunlight from the less aggressive sorts. A good "playground supervisor" sees the conflicts coming, and intervenes before things get out of hand. Native sunflowers, with their aggressive underground rhizomes and height advantage, have been steadily advancing to claim the whole space. There are still some non-spreading species hanging in there. Hibiscus moscheutos, tall meadowrue and cutleaf coneflower are tall enough to compete, leaping for a piece of the sun in this botanical game of basketball, but even their years are numbered if we don't return to weed out some of the aggressors.

Years back when we planted the garden, we did a lot of things right, but made a common mistake, thinking it was okay to plant the perennial sunflowers to fill some of the copious space, because surely we'd be vigilant enough to limit their spread. Now we'd need to weed out hundreds of new sunflower shoots each year if we wanted to preserve the diversity from which comes a variety of blooms throughout summer and fall. The result is pleasing enough, though, with spectacular yellow blooms in late summer, and essentially no weeds. Any garden that's weed-free and attractive while requiring only two man hours of work per year can be considered a success. 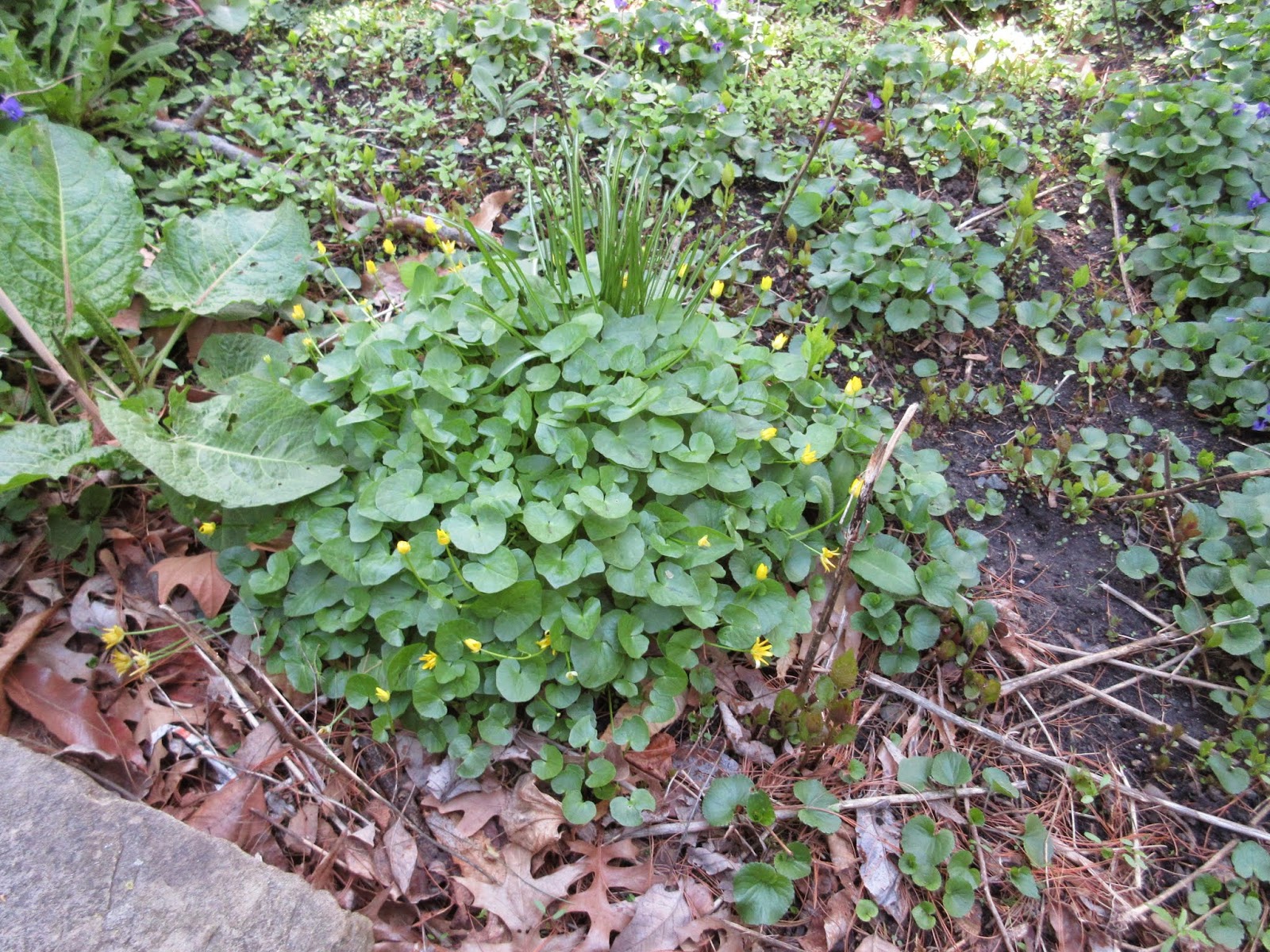 Elsewhere in the park, in flower beds planted by contractors as part of a grand design, the weeds are getting the upper hand. What looks like undifferentiated green in this photo is really a mixed bag. There's still some diversity, but the botanical bullies are poised to take over. That big clump with pretty yellow flowers is an ominous sign. Called lesser celandine, it's a nonnative that will spread aggressively if left to grow. Now, when there's only one plant in the entire park, is the time to dig it out, put it in a plastic bag and send it to the landfill. 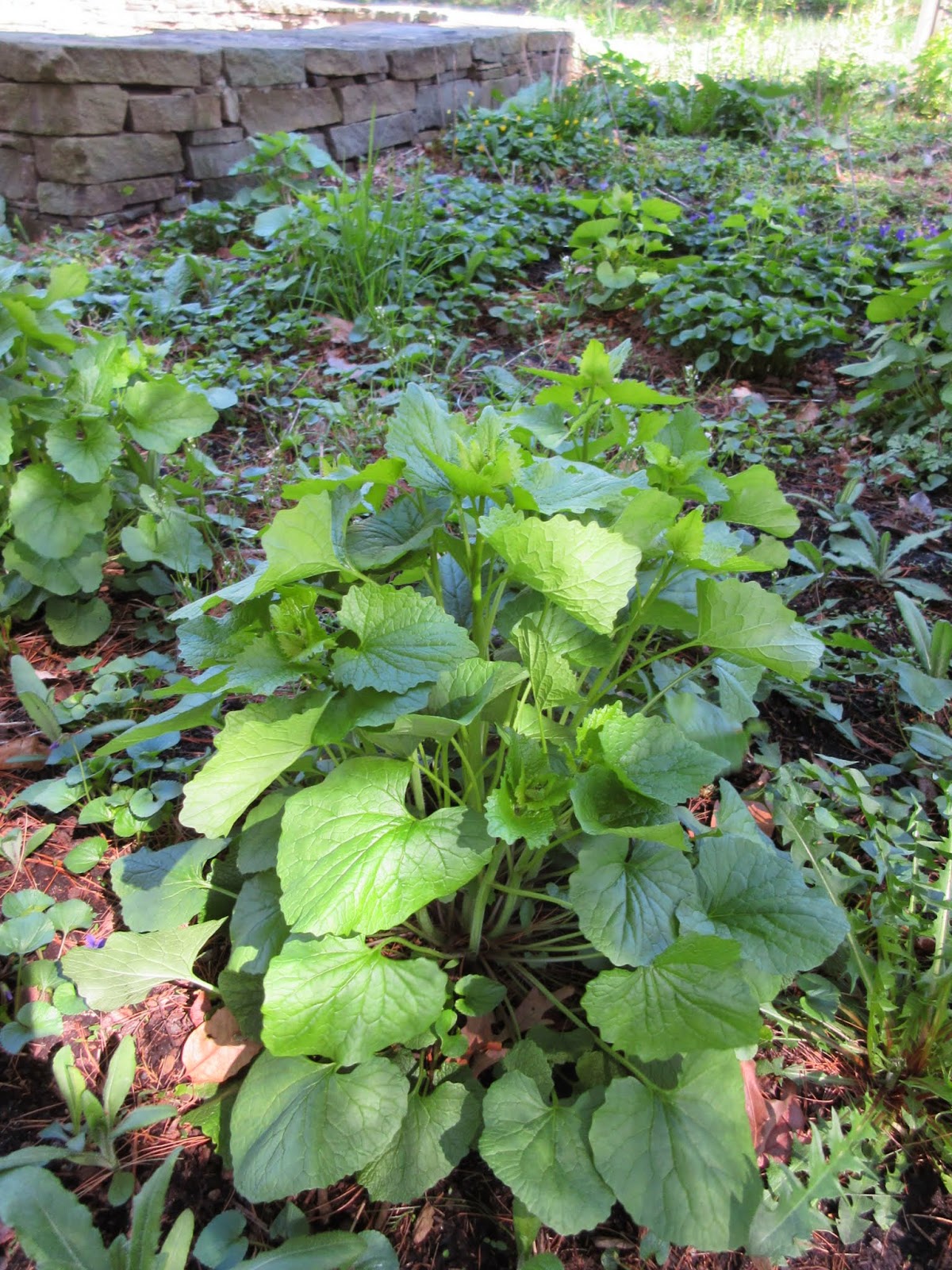 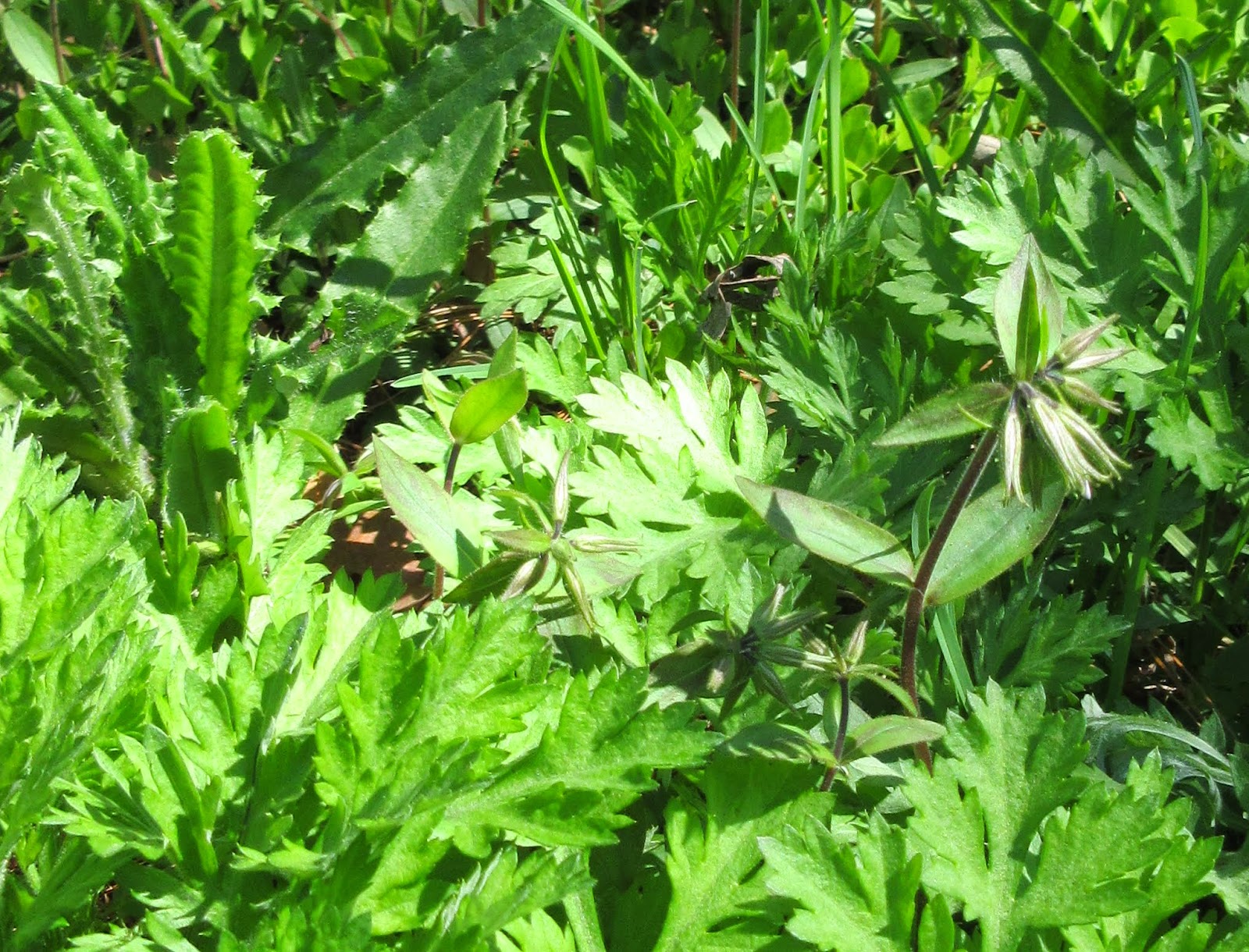 Elsewhere in the flowerbed, in this sea of nonnative Canada thistle and mugwort, is one of the intended native plants--wood phlox, barely noticeable there on the right. It will soon offer a beautiful blue flower, but the best time to take action is before it starts flowering. Someone with a good eye for plants needs to swoop in and save it from the quiet sea of aggressors rising all around it. 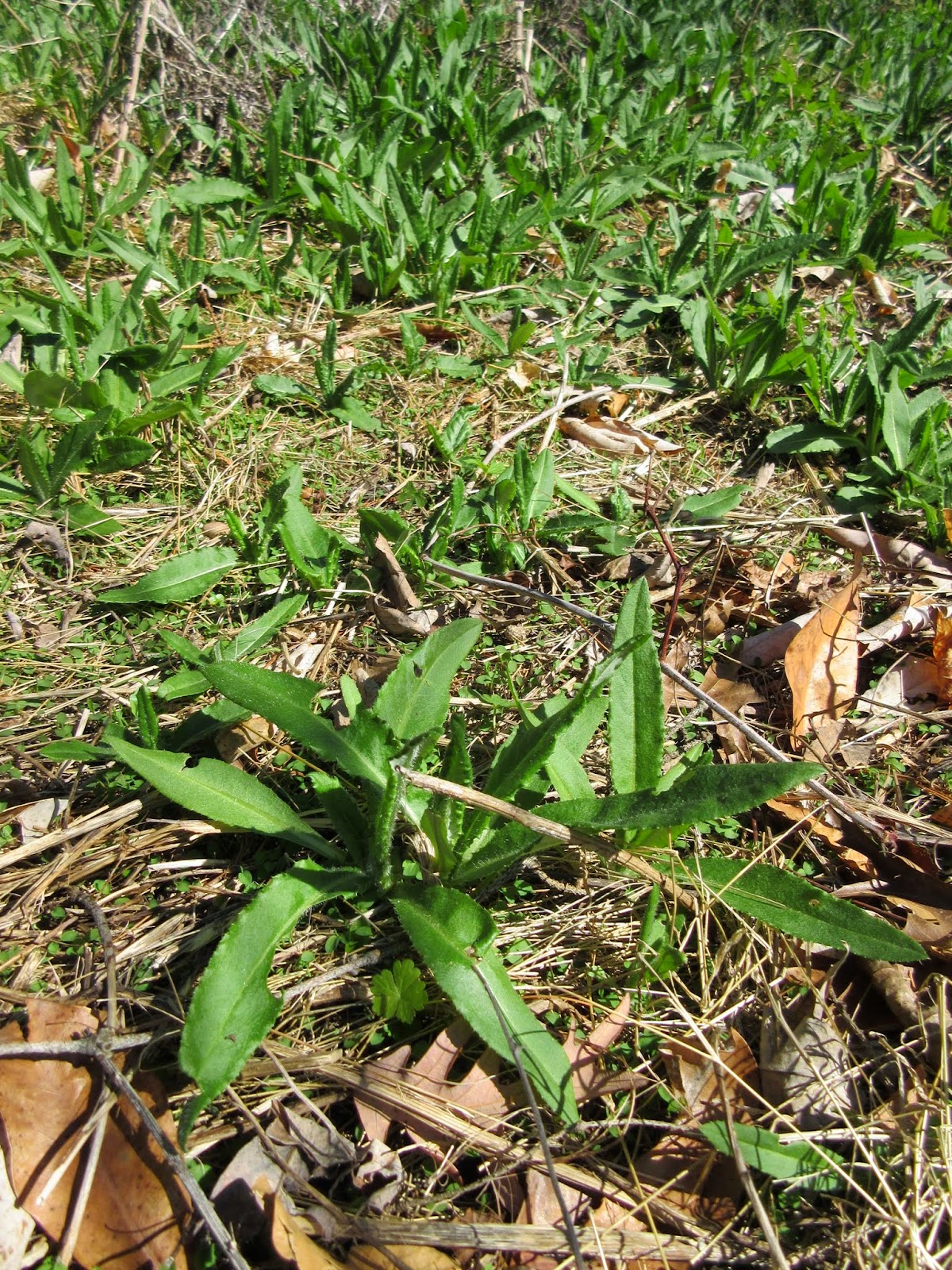 Most native plantings are low-maintenance. Like any sort of management, if you get everything running smoothly, the manager's workload will be light. With some strategic timing and finesse, and auspicious siting of the gardens to take advantage of sun and runoff, the mutiny of Canada thistle in this photo would be caught early and kept from gaining momentum.

Who might do this work is a good question. Princeton employs only one staff person whose job it is to know one plant from another--one more staff than most towns hire. That's the arborist, whose primary focus is on trees. Another employee, in the recreaction dept, tends to the beautiful plantings around the rec offices and swimming pool, but that's above and beyond her official duties. In most parks, grass gets mowed, trees get some attention, but the rest of the plant kingdom is on its own, unless some volunteers come along with time and knowledge.

To sustain more interesting and attractive plantings, there would need to be someone who knows the plants, knows the various times during the year when strategic intervention will be most effective, and can mobilize some volunteers to do the work. If someone is, or at least feels, responsible, then parks can be a playground for plants as well as people, a place where people can get to know something of our natural heritage. A garden is a long-range commitment. If done right, it can be sustained, year after year, along the fringes of a park, with a few hours now and then, found on the fringes of our days.