Herein, the importance of timing, persistence, and collaboration for vanquishing the bamboo bully in the backyard:

There's been great progress in the battle against bamboo being waged by my next door neighbor and myself. Last year, I alerted the long-distance landlord to the fact that the bamboo had started actually prying the siding off the other side of his house by growing up between the siding and the foundation. He hired a crew to take action. They cut down all the bamboo, planted grass, declared victory, and haven't been seen since.

That was an important first step, but it won't do much good unless there's followup. As this picture shows, the battle is far from won. In the lower right, you can see the bamboo has sprouted once again along the foundation. And over on the left, hundreds of new shoots have shot some ten feet into the air. 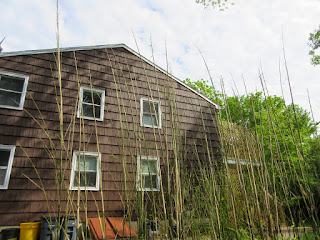 Another angle shows that the bamboo roots, still intact, had plenty of stored energy to send up long shoots that are just about to deploy solar panels in the form of leaves. Now, while the stems are soft and the roots have invested energy without yet gaining any solar return, is the time to cut these stems down. Otherwise, the bamboo will fortify its root system and be well along the way to regaining its former mischievous glory. Unfortunately, the neighbor on that side of the rental is not joining in the fight. 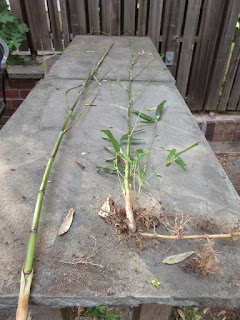 The prognosis is much better on my side of the rental. For my part, yesterday I dug up every last bamboo shoot I could find, pulling out as much of the root as I could. You can see in the lower right the thick rhizomes that form a dense clone, requiring that the whole clone of bamboo be repeatedly cut down in order to starve the roots.

Most likely, a similar resurgence is happening right now at the Princeton Battlefield, where volunteers cut down all the old bamboo stalks earlier this spring. How much easier their battle will be next spring if they round up a battalion now, when the time is most ripe for followup, and wield loppers to foil the bamboo's quiet resurgence.

(This link should take you to past posts about dealing with bamboo. Otherwise, type "bamboo" into the search box at the top of this blog.) 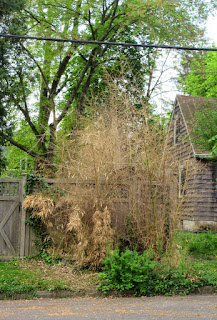 Two other neighbors appear to have teamed up with a chemical assist, which I've never tried.