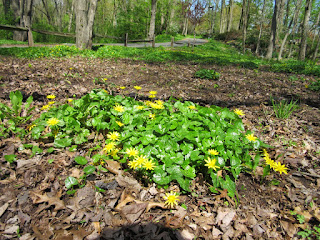 Yellow is not so mellow in April and May, when one of the uber-invasives, lesser celandine, carpets many floodplains and spreads across lawns. The now massive population at Pettoranello Gardens no doubt started as a clump here and there. In an example of how the management of one park can affect others, the lesser celandine at Pettoranello Gardens has since spread downstream to infest the lower portion of Mountain Lakes preserve, where it is displacing the native species that have long filled a similar niche in a less domineering way. 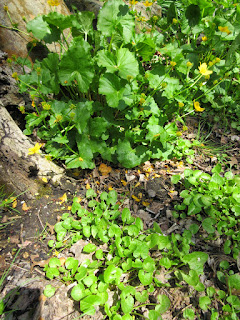 The lesser celandine is often confused with the native marsh marigold, which I've never seen growing naturally in Princeton. To show how they can be distinguished, I planted some marsh marigold (bought at Pinelands Nursery) down near the stream at Pettoranello Gardens, in a spot that would benefit from the stream's steady water supply but not be swept away by floods. The location proved a good choice, because it has survived many years now. You can see it at the top of the photo, taller and with larger leaves than the lesser celandine in the lower half of the photo. More marsh marigold has been thriving at the Princeton High School ecolab wetland, which too has the stable presence of moisture the native requires. 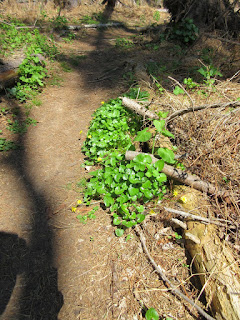 Ecologically, the only good news I know about lesser celandine is that there are still some parts of Princeton that have not been colonized by it. But those locations must be monitored each year to catch invasions before they get out of hand. To take a for instance, in Community Park North, which is upstream of Pettoranello Gardens, I found only two small patches that could easily be treated to prevent spread. The plant likely got there on the shoes of someone hiking on a muddy day.