One Good Garden Begets Another 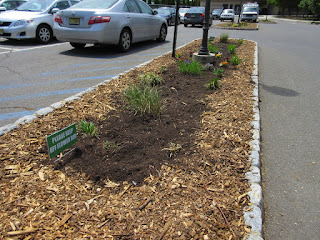 A vision for attractive, low-maintenance curbside landscaping appears to be spreading across the municipal swimming pool's parking lot. The combination of mulch and perennials means little upkeep needed beyond an occasional watering. 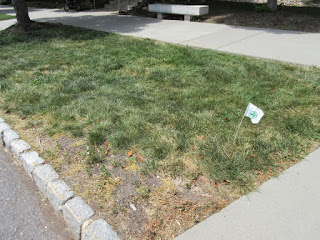 The default lawnscaping still found elsewhere in the parking lot requires mowing, watering, and broadleaf herbicide, which I was told by a former rec dept director was necessary to keep white clover from growing. The clover flowers attract bees, which don't go well with barefoot swimmers. 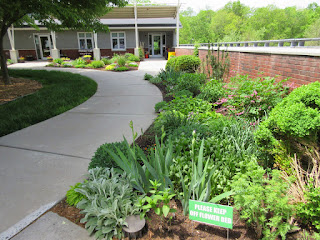 The new garden looks to be the offspring of other gardens nearby. There's the Dogwood Garden Club's garden, here on the right, and Vikki's plantings in front of the parks and rec offices in the distance. 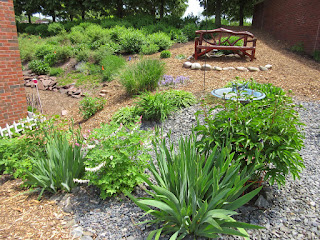 Vikki, a rec dept. employee, had already expanded her gardens beyond the walls and down towards the police department's parking lot. It's in the nature of well-tended gardens to expand, since the perennials benefit from occasional division, insuring lots of new plants that need new space to grow in. 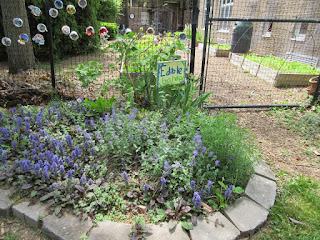 At the other end of the municipal parking lot, another garden prospers, at Community Park Elementary. There's the edible portion in the front, and a more prairie-like garden in the back courtyard. Here, too, is a similar story of one garden inspiring another, until gardens now grow at all Princeton public schools. 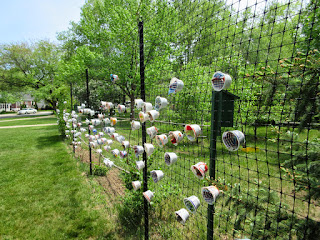 A more detailed story of this greening of schoolyards--with Karla Cook, Dorothy Mullen, science teachers John Emmons and Martha Friend, and many other parents, students and teachers playing a role--can be found at the Princeton School Gardens website. 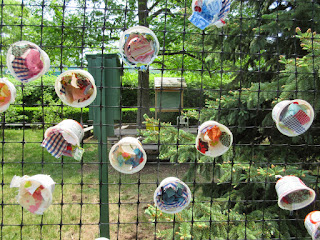 It may even explain what these cups signify--perhaps something to do with celebrating ten years of gardening at CP school.

Add to this the community gardens around the corner on John Street, overseen by the rec department, and one has a central example of a public gardening renaissance in Princeton.
Posted by Steve Hiltner at Wednesday, May 27, 2015